Partners Hugh Lamb and Charles A. Rich were as much businessmen as designers.  As their success (and finances) grew, the architects branched into real estate development, often owning the projects they designed--either together or individually.  In 1891 they embarked on a vast project--a row of 19 houses that would cover the western blockfront of West End Avenue between 76th and 77th Streets, anchored by two houses each around the corners on the side streets.

Architecturally, the 76th Street pair, Nos. 303 and 305, were somewhat subdued when compared to their West End Avenue sisters.  Nevertheless, at 23-feet wide and four stories tall above high basements, they were intended for well-to-do families.   Mirror images of one another, their brick-and-stone Renaissance Revival design featured three-story rounded bays, unusual stone hoods above the entrances, and a profusion of terra cotta ornament on the top floors.


No. 303 was the home to the John Baker Roach family for a few years.

Born on December 7, 1839, his family had for generations been in the ship building business.  The massive Roach ship yard in Chester, Pennsylvania employed more than 4,000 men in the 1880's.  He became a partner in the family firm in 1867 and by now was its president as well as vice-president of the Morgan Iron Works.  He traveled to the Chester shipyards about once a week.

Roach and his wife, the former Mary Caroline Wallace, had married in 1861.  Of their 11 children, only five survived to adulthood.  By the time the couple moved into No. 303 all the children were married except John, Jr.

The Platt name was well known in New York.  The 37-year old Henry Barstow Platt was the son of former Senator Thomas C. Platt.  A banker, he had graduated from Yale.  He was also vice-president of the Fidelity and Deposit Co. of Maryland, and general superintendent of the United States Express Co.

Grace Lee Platt, too, came from a prominent family.  Born in 1863, she was the daughter of John Case Phelps, of the Phelps mining family.  A member of the Colonial Dames of America, Grace traced her American lineage back to Puritan settler William Phelps who arrived in 1630.

The house would be filled with the sounds of children.  Sherman Phelps Platt was seven years old, Charlotte was just one, and Grace was pregnant with Thomas Collier Platt, who would be born in the house on May 3, 1898.  Another child, Martha Barstow Platt, had died on January 27, 1894 at the age of two.

Like most wealthy families the Platts owned a summer home.  Theirs was in Laurel Run, Pennsylvania.  Around the turn of the century they joined the newly-fashionable trend of escaping New York's cruel winters by spending time in the lavish Florida resort hotels.  On January 27, 1907 the New-York Tribune noted that they were in St. Augustine.  "Mr. and Mrs. Henry Barstow Platt, of New York, are at the Ponce de Leon.  They may visit Palm Beach, Miami and Ormond before returning home."

That would be the last winter trip for Grace.  At the end of June she left No. 303 to spend the summer at Laurel Run.   Once there she contracted typhoid fever and died on July 14 at the age of 44.  Henry was tasked with raising the children--the oldest of which was 17--alone.

The title to No. 303 was, as was most often the case, in Grace's name.  Henry and the children remained in the house until 1912.  In September that year he sold it "as executor for the Platt estate" to Judge Thomas C. O'Sullivan.

O'Sullivan, who had been a New York State Senator in 1894 and '95, was now a judge of the Court of General Sessions.  He was was most likely best known to New Yorkers for having tackled the terrifying problem of "White Slavery."  Forced prostitution of young girls, most often poor immigrants, had become epidemic.  Two years before purchasing No. 303 O'Sullivan had appointed John D. Rockefeller, Jr. to head a special grand jury to investigate prostitution in New York City.

Judge O'Sullivan was equally known for his physical appearance.  Decades earlier which working a summer job in a Vermont factory, he lost his arm in a machinery accident.  In 1907 after a serious bout of pneumonia, an eye had to be removed.

Living with O'Sullivan and his wife, the former Elizabeth (known as Minnie) McKenna, were their two sons, Daniel J. and Thomas Cullen O'Sullivan.  Daniel worked in the court system as "atttendant for Judge Malone," earning $1,800 a year--about $43,700 today.  Thomas was 18 years old when the family moved in.

The O'Sullivan summer home was in Spring Lake, New Jersey.  The family was there in the summer of 1913 when the Judge fell ill.  About a week later, he died early on the morning of July 29, 1913.  The New York City court system shut down the entire day in his honor.  In announcing his death to the judges, District Attorney Whitman called O'Sullivan "a ripe scholar, a most cautious, painstaking, and studious jurist; he tempered justice with mercy, and held the scales of justice evenly."

One person who, perhaps, did not temper justice with mercy was Henry Barstow Platt.  Judge O'Sullivan had mortgaged the house through Platt.  When O'Sullivan died Platt rather ghoulishly demanded full payment from Minnie.

O'Sullivan had left his estate to his wife; but surprisingly there was no estate.  On August 29, 1914 The Sun ran a headline that read "Judge O'Sullivan Died Poor" and reported that the only assets, other than his law books, was the single paycheck that had been due him when he died, $1,384.

A month earlier Henry Platt had begun foreclosure proceedings against Minnie O'Sullivan.  The New York Times reported on July 18, 1914 "There was a mortgage on the Seventy-sixth Street property which, according to Mr. Platt, was to have been paid shortly after the Judge's death, but the time for payment was later extended to October, 1913.  Mr. Platt says that $24,000 is now due on the mortgage."

Platt chose an inopportune time to get tough with the widow.  On February 21, 1915 The Sun remarked on the weak housing market.  "In the west side residential section for instance one can see exactly what the slackening demand for private houses has done.  There is a fine dwelling at 303 West Seventy-sixth street for which the owners are now asking $30,000 and for which they probably would take a few thousands less to let them out."

The following month Platt found a buyer in Charles Madison Cannon.  (What became of Minnie O'Sullivan is unclear.)  An attorney specializing in estates, wills and trusts, Cannon was the son of another well-known lawyer, Sylvanus Townsend Cannon.  He graduated from Columbia Law School in 1886.  He and his father formed the firm of Cannon & Cannon in 1896.

Cannon had married Edith Laing on October 9, 1897.  They had four young adult sons, Townsend Laing, Charles Madison Jr., Alexander Laing, and John.   Charles's father had died in 1899, and his mother, Miriam Haines Carpenter Cannon, moved into the 76th Street house with the family.

Charles Jr. graduated from the Columbia School of Architecture in 1918; but war changed his career path.  He listed No. 303 West 76th Street as his official address in 1920; although he was still in the U.S. Army years after the end of the war.  By now he had achieved the rank of First Lieutenant.

Townsend was a partner in Cannon & Cannon with his father.  On March 26, 1926 he married Reba E. Houser in the West End Collegiate Church with his brother Charles as best man.  The proximity of the church--just around the corner from the Cannon residence--was most likely the reason that the wedding reception was held here rather than at the bride's home.

It was a busy year for the Cannon household.  Three months later Charles's engagement to Hortense Green was announced and their wedding took place in Seattle in August.

The joyful year took a solemn turn when Miriam Cannon died in the house a few weeks later, on September 15.

Charles Sr. took an active role in the Upper West Side community.  A member of the West End Association he was present at the meeting on February 2, 1932 when the group resolved to urge the Board of Aldermen to forbid "the use of sidewalks for fruit, vegetable and other merchandise stands between Fifty-ninth and 125th Streets on the west side."

Charles Cannon died in the 76th Street house on November 12, 1936 at the age of 73.  The house was sold to the 303 West Seventy-Sixth Street Realty Corp. sometime afterwards, which leased it as a private home.

The Rosbam Realty Corp, which purchased the house in 1950, operated it as a rooming house.  Its most infamous tenants, Zvonko Busic and his wife Julienne, moved in in around 1972.

An epidemic of airline "skyjackings" erupted in the 1970's.  With no airport security, no metal detectors, no TSA guards, no luggage screenings and open access to the cockpits, hijackers found commercial airlines to be easy targets.  Their motives were wide-spread, from political demands to financial rewards.  Between 1968 and 1972 alone 130 American airplanes were hijacked.

On September 10, 1976 it happened again.  That day a group of four men and one woman calling themselves "Fighters for Free Croatia" commandeered Trans World Airlines flight 355 on its way from LaGuardia Airport to Chicago's O'Hare.  Claiming to have a bomb, they headed the plane to Montreal where they refueled.

They told authorities they had also planted a bomb in Grand Central Terminal.  During the drama that unfolded in Montreal and then Newfoundland, where 35 passengers were released, police found the Grand Central bomb.  In attempting to defuse it, it exploded, killing one officer and wounding another.

When Flight 355 landed in Paris (it was originally headed to London, but the British government refused to allow it to land) the hijackers were arrested.  Two days later The New York Times reported that the head of the group was the 28-year old Zvonko Busic.  The lone woman was Julienne.  The article noted "it was learned last night that F.B.I. agents spent much of yesterday afternoon interviewing residents of the small apartment building at 303 West 76th Street, near West End Avenue.  Mr. Busic has an apartment on the second floor of that four-story brownstone, one neighbor said."

Busic took full responsibility for the hijacking and the Grand Central bomb, saying none of the others were involved.  As for Julienne, he told investigators that she "had wanted no part of the venture.  but he added that she had agreed to go along when he had threatened to leave her if she did not."

All five were found guilty.  Zvonko was given a life sentence and the others were sentenced to 30 years.  The three other men were released in 1988 and Julienne in 1989.   Ten years into his sentence Zvonko escaped from the Otisville Correctional Institution, 60 miles north of New York City.

He was recaptured.  After his release in 2008 he was paroled and deported to Croatia where a throng of 500 greeted him at the airport.  Among the crowd were his wife and three co-hijackers.  Five years later Julienne found him with a gunshot to the head.  He had committed suicide at the age of 67. 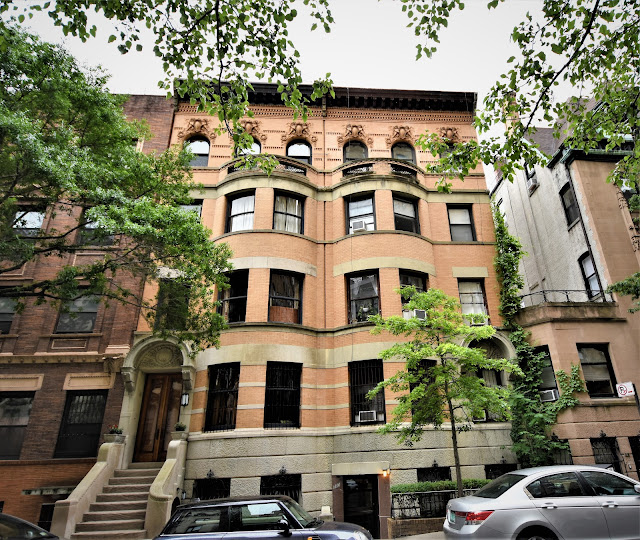 In the meantime, three years after the hijacking No. 303 had been converted to apartments, two per floor.  The entrance was removed to the basement level at the time, leaving the stone hood floating without a purpose other than to maintain balance with its twin neighbor.