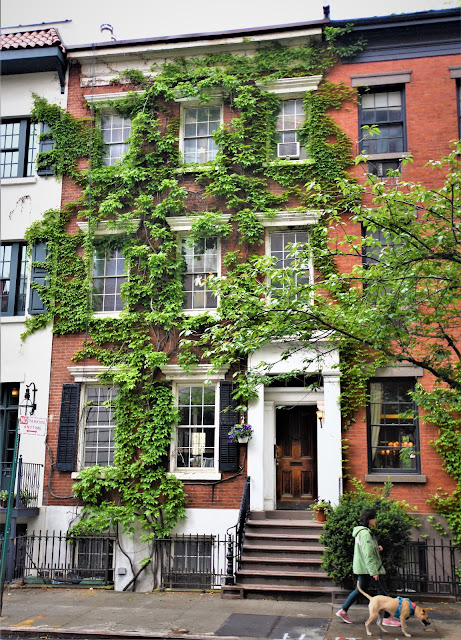 Carpenters John Degraw and Samuel Winant were not only business partners, they appear to have been best friends.  When Degraw opened his carpentry shop in 1827 at No. 11 Watts Street, Winant's had been at No. 17 Jacob Street for seven years.  Both were volunteer firefighters at Hook & Ladder Company No. 3 on Vandam Street (they resigned in 1830).

In 1828 they not only partnered as Winant & Degraw, but were living in the same house.  Winant and his family had been living at No. 50 Vandam Street for several years and now city directories listed Degraw at that address.

The men expanded into development and building.  In 1839 they purchased the plots stretching from No. 12 through 18 Grove Street where they erected four identical homes, completed the following year.  The 21-foot wide brick-faced houses were handsome, unassuming examples of the popular Greek Revival style.  The openings were trimmed in modest brownstone sills and lintels; and the doorways were framed in the expected heavy stone pilasters and entablatures of the architectural style.

The partners would no longer have to share the same house.  John Degraw moved into No. 16, and Winant's family into No. 14 next door.

In 1852, 12 years after the Degraw family moved in, daughter Mary got a job teaching in Primary School No. 27 about three blocks away at No. 174 Amos Street (later renamed West 10th Street).  She taught there for several years, earning a salary of $100--about $3,000 a year today.

It appears Samuel Winant retired around 1857, at the age of 60.  His family moved to Staten Island where he died eleven years later.  Business directories listed "John Degraw & Co." in 1857, with no further mention of Winant.

Fire was a constant threat in the 19th century, when finding one's way in dark cellars and attics required open flames--candles, kerosene lamps, or in the case of upscale homes, gas jets.  On November 25, 1860 the Degraw house narrowly escaped disaster.  The New York Times reported "About 4 o'clock yesterday afternoon, a fire occurred in the dwelling-house No. 16 Grove-street, near Hudson, in a clothes closet on the top floor, caused by the carelessness of one of the occupants, who place a lighted candle near some garments.  Damage to the amount of $50 was done."   The loss would be equal to a little more than $1,500 today.

The Degraws moved from Grove Street around this time.  The family leased No. 16 to the Silvanus Gedney family.  Gedney was a partner with John G. Hadden in the successful construction firm of Hadden & Gedney with offices at No. 147 Prince Street.

Born in 1801, Gedney had suffered unfathomable heartbreak by the time he moved into the Grove Street house.  He was married three times.  He and his first wife, Nancy, had seven children, only three of whom were living when she died in 1847.  He married his wife, Susan, in 1850.  She died seven years later.

Gedney's third wife, Margaret, whom he married in 1858, was 30 years younger than he.  At the time of their wedding he had witnessed the deaths of five of this children; only his 32-year old son Alexander and 20-year old son William Alfred were still alive.   Alexander died the following year.

And tragedy in Silvanus Gedney's life continued.  On Saturday, January 23, 1864 33-year old Margaret died.  Two days later The New York Times announced "The friends or the family are invited to attend the funeral services this (Monday) afternoon, at 3 o'clock, from her late residence, No. 16 Grove-street."

William had married Latitia Cassidy in 1861 and the couple remained in the Grove Street house with William's aging father.   In February 1874 the family placed an advertisement in The New York Herald seeking a servant.  Their ad suggested that whoever landed the job would have little free time on her hands.  "Wanted--A girl to do general housework...must be a good cook, washer, ironer and baker."

Silvanus Gedney died on October 15, 1889 at the age of 88.  William and Latitia moved to Jersey City where William died two years later, at 52.

Still owned by the Degraw family, No. 16 Grove Street was home to the family of John Purcell by the second half of the 1890's.  Purcell lived here with his second wife, Margaret.  The couple had married in 1879 after both their spouses had died.

Purcell was well-connected politically.  The Commissioner of Jurors, The New York Tribune described him on January 2, 1898 as "The Tammany Leader in the IIId District and a close friend of Richard Croker."  Known as "Boss Croker," he was the leader of Tammany Hall, wielding an almost unchallenged hand.

Eight months after the Tribune's mention of him, John Purcell was dead.  On September 16, 1898 The New York Times wrote "Many friends of the deceased official assembled at the family residence, 16 Grove Street, and proceeded to St. Anthony's church, were a solemn mass of requiem was celebrated."  The funeral was attended by New York City and State political heads.  Along with Croker were two senators, a judge and Sheriff Thomas J. Dunn, for example.

The Degraw family continued to own the house into the 20th century.  On March 19, 1910 John H. Degraw transferred title to Lotta Degraw, who lived in Teaneck, New Jersey.  For the first half of the century it was operated as a rooming house.  On October 23, 1931 American composer, lyricist and librettist Marcus (known as Marc) Samuel Blitzstein moved in, paying $10 a week rent.

According to biographer Howard Pollack in the 2012 Marc Blitzstein: His Life, His Work, His World, it was during his time here that he "developed a romantic relationship with his future wife, Eva Goldbeck."   Eva arrived in New York later that month and Blitzstein managed to get another room in the house for her.  They would remain in No. 16 through 1932.

Another well-known resident was newspaper reporter, book reviewer and editorial writer, Maurice Joy.  Born in Ireland he came arrive in New York after working in Canada as a writer for The Montreal Star in 1916.  He joined the staff of the New York Evening Mail and later The New York Sun, before settling into free lance writing, most notably for the New York Herald Tribune.  He died in the Grove Street house on April 27, 1944.

By mid-century No. 16 was owned by Marie Louise Goebel.  She did not live in the house, but leased it to rooming house proprietors.  Not all of the tenants were as respectable as Blitzstein or Joy.  On February 7, 1956 38-year old Andrew Finnegan was arrested for his part in a string of burglaries in new apartment houses.  He and a partner, Irving "Izzy the Eel" Cohen bribed construction workers to sell them master keys to buildings under construction.  Once they were completed and occupied, the pair would use their keys to gain entrance and rifle apartments.

When Marie Goebel sold the house in February 1957, it contained 10 furnished rooms.  The New York Times announced simply "The property will be remodeled."  A renovation was completed the following year that resulted in a duplex apartment in the basement and parlor floor, one apartment and one "class 'b' room," on the second, and one apartment on the third floor.

Another renovation was completed in 1970.  Now a two-family home, it contained a triplex in the basement through 2nd floors, and a single apartment on the third. 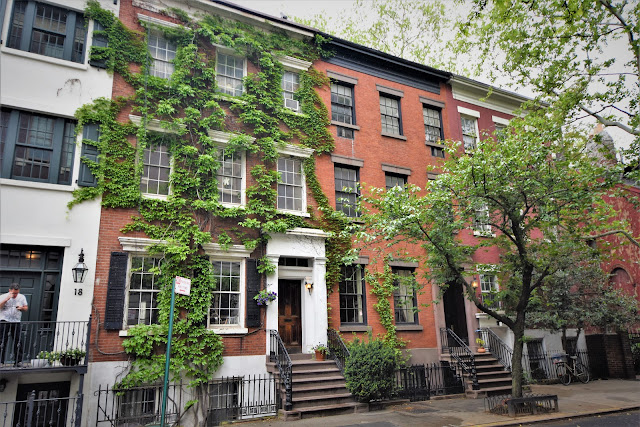 At some point in the late 19th century the Degraws updated the house with sheet metal cornices over the stone window lintels.  In the late 20th century these were painted white, along with the brownstone trim.  Otherwise the house greatly retains its picturesque 1840 appearance.

photographs by the author
Posted by Tom Miller at 11:39 PM