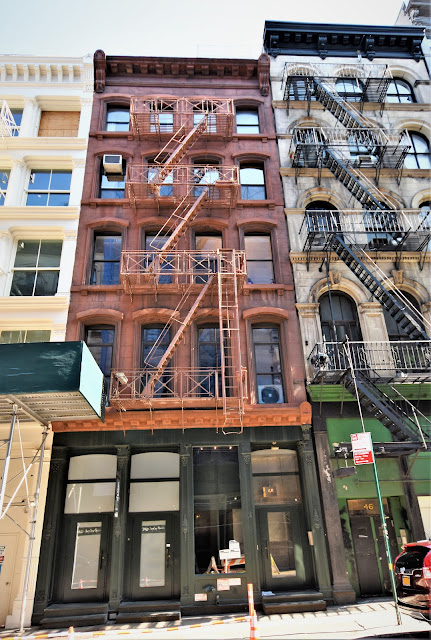 In 1854 the architectural office of T. Thomas & Son had earned esteem for designing some of Manhattan's most notable buildings, like the Astor Library, the Chemical Bank Building and the Broadway Bank Building.  The firm was hired by George Johnson that year for another, less prominent project.

Born in England, Johnson arrived in New York in 1823 and opened a rope factory.  Before too long his focus turned to furniture, instead.  George Johnson & Co. was located on William Street when the cornerstone of No. 44 Walker Street was laid.  The firm tackled almost every conceivable facet of furniture making--manufacturing the springs, weaving horse hair into upholstery fabric, and carving the frames.

George Johnson & Co.'s new factory was completed in 1855.  T. Thomas & Son gave the five-story, brownstone-clad structure a toned-down version of the high-popular Italianate style.  The segmentally-arched openings with their sills sitting on little brackets could as easily have been designed for an upscale residence.  The attractive bracketed metal cornice was typical of the period.

As expected, the storefront was cast iron.  Manufactured by the Architectural Iron Works, its piers were originally graced by Corinthian capitals, and a handsome entablature which included scrolled foliate brackets upheld the brownstone cornice.


George Johnson & Co.'s want ads testify to the broad array of tasks its staff performed.  Just before moving in to the new headquarters, a "Flax Dresser' was needed.  On March 15, 1856 an advertisement read "Wanted--An engineer to take charge of a small engine," and three days later "Wanted--Furniture Carvers to go to Cincinnati, Ohio."

The need for the men to travel to the Midwest was evidence of George Johnson & Co.'s jobbing business.  The firm not only manufactured and sold furniture in the Walker Street facility; but did work on site.  Another advertisement in March 1864 read "Wanted--Six Upholsterers to go a short distance from the city, to whom good wages will be paid."

Even the Civil War did not substantially interfere with George Johnson & Co.'s success.  The New York Times reported on June 28, 1865 that the firm had done $379,000 in sales the previous year--nearly $5.9 million today.

In 1867 the company was renamed Johnson & Faulkner.  George Johnson had grown wealthy and enjoyed the privileges that came with success.  His nine-acre summer estate, described as having a beautiful view, was on Castleton Avenue on Staten Island and included outbuildings like a stable and wagon house.

In stark contrast were the living conditions of his tenants.  In addition to making furniture Johnson & Faulkner owned tenement houses.  On September 14, 1872 The New York Herald ran the headline "TENEMENT HOUSE HORRORS" and described a "raid" by police on "miserable structures" on Elm Street (now Lafayette) and Oak Street behind it.  The police had were ordered by the Sanitary Commission to evacuate the buildings, deemed "unfit for human habitation."

"The houses in Elm street were first emptied, and the scene was pitiable as the wretched inmates removed their furniture to the sidewalk," said the article.  "The old women, so feeble that they were scarcely able to walk, wept bitterly, and the younger women and children, though not so demonstrative in their grief, were almost rendered desperate by the predicament in which they were placed."

With their scant belongings piled on the sidewalk, the families were now homeless.  Although they were ousted for their own good; there were no contingencies for sheltering them.  They were on their own.  The New York Times remarked they "probably slept last night upon the sidewalks, an alternative which would doubtless be preferred by thousands rather than spend a night in the dilapidated old rookeries in which these poor people have dragged out a miserable existence."

The Herald noted "The houses, which are unfit for beasts of the forest to huddle together in, far less human beings, were occupied by about six poor families, and are owned by Messrs. Faulkner and Johnson, 44 Walker street."   It was by no means welcomed press coverage for the firm.

Johnson & Faulkner moved to larger quarters on Greene Street around 1874.  That year the newly-formed Shackman & Katski, dealers in "cloths," moved into No. 44, sharing the building with R. Lalke & Co., shirtmakers.  R. Lalke placed an advertisement in The New York Herald in November that year that included an interesting condition.  "Wanted--A smart boy in a wholesale shirt business, about 13 years old, who resides with his parents."   (Manhattan had a large population of homeless boys, called "street arabs," notorious for pilfering.)

The following November the firm placed a far different ad.  "Lost--On the evening of the twentieth...on a Second avenue car, a Package containing check book, ledger, cash book and two invoice books, also $175 in cash.  Whoever has found and will return the same to R. Lalke & Co., 44 Walker street, will receive $50 reward."

Whoever placed the ad was optimistic that the finder would be eager to trade $175 in cash for $50.

For years the ground floor had housed a respectable saloon and restaurant, run by C. Bary.   In the summer of 1875 both Shackman & Katski and R. Lalke were gone.  The second and fifth floors were leased by Elias & Co., manufacturers of skirts; and the third and fourth floors were occupied by Goldstein & Brothers, dealers in "gentlemen's garments."

At around 6:15 on the evening of June 1 flames were seen coming from the Elias & Co.'s second story windows.  An alarm was sounded and fire fighters from nearby companies responded.  The blaze had additional time to spread when the truck of Engine No. 31 flipped over on Church Street.

While the building sustained some damage, all of which was covered by insurance, tenants were not so lucky.  Bary's saloon suffered about $11,500 in damages by today's standards, and Elias & Co.'s losses in water and fire damage were ten times that amount.

Bary apparently decided it was time to retire or relocate.  The high-end nature of the establishment was evidenced in the auction sale in August 1875.  Offered to the highest bidder were "a fine Bar and back Bar, Cigar Stand and Showcases; also about 200 Chairs, 40 Tables, Glassware, Crockery, Oil Paintings, Mirrors, Sideboard" along with office furniture and the stoves and ranges of the kitchen.

Although Goldstein & Brothers's stock was only "slightly injured," according to The New York Herald, they too would shortly close their business.  On December 29, 1876 the same newspaper would report shocking news.

"Isidore Goldstein and A. Goldstein, formerly doing business at No. 44 Walker street as clothiers, were arrested on Wednesday night last, by United States Deputy Marshal Bernhard, on a criminal charge of fraudulent bankruptcy."  Their bail was fixed at a staggering $235,000 in today's dollars.

In 1880 Hewlett Scudder purchased No. 44 from George Johnson's estate.  A well-respected businessman and vice-president of the Union Square Savings Bank, he too would soon be repairing fire damage--but he seems to have come out better off.

Scudder's tenants continued to be related to the garment industry.  In 1882 S. B. Nichols & Co. was in the building, dealers in bargain-priced sewing threat.  An advertisement in The Sun in June that year read "Try the 'Home' Spool Cotton--Works on all sewing machines.  It takes the place of six-cord and all high price threads."

M. Homberger, maker of cloaks and R. Wolff & Co., dealer in leather goods, were here in 1891 when yet another fire broke out at 4:14 a.m. on the fifth floor.   The blaze was quickly extinguished, but Rudolph Wolff learned his lesson--he took out $25,000 in fire insurance a few weeks later.

At the turn of the century Lewis Meyer's small clothing factory employed just four men who worked 54 hours each week.  I. Beaver made suspenders and that firm, too, had only four employees.  M. Fine & Sons, makers of overalls, was apparently a more substantial operation.  That company, which was here for several years, ran afoul of the City's Department of Labor in 1902.

Factory inspector M. J. Flanagan cited all three partners--Henry, Isidor and Morris Fine--for having unsanitary conditions.  The restroom was not "properly ventilated and clean."  Henry and Isidor were fined $25 each in a hearing on November 24, 1902.  Their father's fine was suspended.

Throughout the first decades of the century apparel firms called No. 44 home.  In 1905 the tenant list included pants manufactures L. Gordan & Sons and A. J. Abrams & Son, and "men's clothing" makers Kaplan & Safferstein.  In 1917 Majestic Neckwear Co. moved in in December.

By the 1920's the Victorian factory buildings were outdated and, in many cases, dilapidated.  The uncomfortable conditions of No. 44 Walker Street were evidenced in a leasing ad in February 1920.  For whatever reason the entire building was vacant.  The lofts were offered for immediate possession and noted "Hoist.  No heat.  Rent reasonable."  ("Hoist" meant there was no true freight elevator.)

The last few decades of the century saw change come to Tribeca.  Lofts and stores became galleries, apartments and restaurants.  In 1961, even before No. 44 underwent a city-approved conversion to apartments, abstract expressionist artist Ed Ruda and his wife, Maria, a native American activist and and actor, moved in.  Before his death in 2014, according to current resident Elisa Casas, the couple lived on every floor of the building.  Casas, who with her husband purchased the second floor from Ruda in April 1994, commented that the artist "told me great stories about being raided in the middle of the night by the police (before the building was zoned for residential use."

A 1986 renovation had resulted the official residences, one per floor, at No. 44 Walker Street.  The ground floor became was converted to The Home for Contemporary Theatre and Art.  Among its first productions was Sleeping Beayoody: Or, To Sleep Perchance to Dream by the Appleseed Players that April.  New York Magazine called it "A farcical play that deals with self-esteem."


By the time Casas took the second floor, the basement had become The Blue Angel Cabaret, deemed by Casas as "classy."  She said, "It became famous because Drew Barrymore took off her clothes and performed there and then talked about it on David Letterman."

In 2004 one apartment was home Mark Seth Lender and his wife, Valerie Pettis.  Lender, a conservation columnist for the Connecticut newspaper the Shoreline Times envisioned an environment-friendly use for the roof.  On December 5 that year New York Times journalist John Freeman Gill reported that "they have planted their rooftop with 2,100 square feet of forest intended to provide habitat for birds and butterflies."

Lender explained "If I plant this right you could sit here and be very quiet and you'll see birds that'll knock your brains out."

In the meantime, the brains of pedestrians at ground level remain intact, as is nearly all of the handsome facade of T. Thomas & Son's 1855 brownstone factory.

photographs by the author
many thanks to reader Elisa Casas for her valuable input
Posted by Tom Miller at 3:16 AM