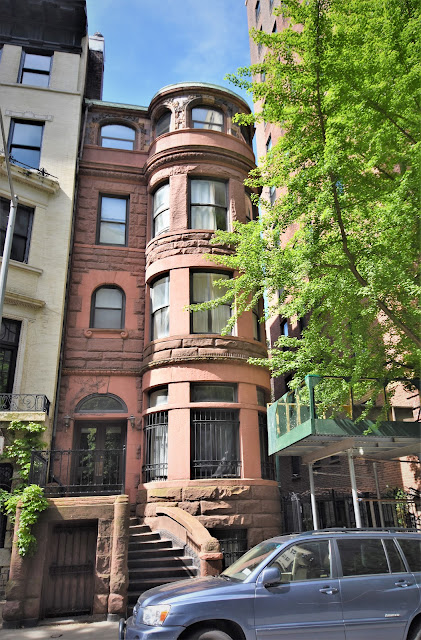 In 1887 Irish-born banker Samuel Gamble Bayne moved his family into an imposing brick and stone Romanesque Revival mansion at the northwest corner of Riverside Drive and 108th Street.  A pioneer in the neighborhood, he recognized the potential of the area with its breathtaking views of the Hudson River and its location facing the coming Riverside Park.

Bayne owned the entire block between Riverside Drive and West End Avenue, between 107th and 108th Streets.  And he continued buying.

By 1889 he was carefully selling off building plots with the strict covenants that only "high class residences" could be erected.   Interestingly, he did not sell the plot directly behind his mansion at No. 330 West 108th Street, but brought the architect of his mansion back to design an architecturally compatible rowhouse on the plot.

Frank Freeman created a romantic Romanesque Revival home three stories high above a basement level.  A stone stoop gently curved up to the parlor level which sat on a chunky base of rough-cut blocks.  A rounded turret-like bay rose the full height of the house, terminating in a pierced stone parapet.  A service alley between it and the Bayne house allowed for additional air and light.

In February 1899 William George Collins purchased the 21-foot wide house.  The 44-year old was an officer in Collins & Aikman Co., dealers in "plush," at 93 Fifth Avenue.  Collins's interests were apparently not limited to the textile business.  He was a member of the Society for Psychical Research, founded in 1884 "to examine...those facilities of man, real or supposed, which appear to be inexplicable on any generally recognised hypothesis."

Collins and his wife would not remain especially long in their new home.  On October 20, 1902 he sold it to druggist George John Seabury.  Seabury's mortgage, equal to about $735,000 today, hints at the sale price.

Seabury was the president of Seabury & Johnson with offices in the Seabury Building on Maiden Lane.  He founded the firm which manufactured "antiseptics, medical and surgical supplies" in 1873 with Robert Wood Johnson.

The partnership was a rocky one with the two men having contrasting opinions for the direction of the firm.  So tense was their coexistence that in 1885 Seabury was deliberately absent from the annual stockholder's meeting.  It all came to a head on July 18 that year when Johnson resigned, selling his half-interest to Seabury, who continued using the long-established name of Seabury & Johnson.  (As an interesting side note, Johnson and his two brothers founded Johnson & Johnson the following year.)

Seabury's wife, the former Ella Green Benson, had died in 1895.  Only two of their four children survived her--daughters Rena and Eugenia.  Although Rena's marriage to David Ely Green, Jr. on June 2, 1897 left just her father and Eugenia in the house, Seabury soon laid plans to enlarge it.

On April 10, 1903 architect Joseph A. Stark filed plans to extend the house to the rear and add a fourth floor.  The extensive renovations would cost Seabury the equivalent of about $450,000 today.  The new top floor successfully carried on Frank Freeman's Romanesque design, while adding frilly terra cotta embellishments to the openings.  They were continued on the extension, which emerged as a charming European-style garden spot with romantic balconies.


Seabury may have been prompted to enlarge the home simply to accommodate his large art collection.  Deemed by The New York Times "a man of versatile and independent art tastes," he had collected more than 150 modern European and American oil paintings.

The Seabury's summer estate was in Llewellyn Park, what the Druggists Circular called "a restricted quarter of West Orange, N. J."

While her father busied himself in work and writing (he was the author of numerous pharmaceutical articles) Eugenia enjoyed herself.  She never married and her name often appeared in society columns as she arrived at resorts or sailed to Europe.

In February 1909 Seabury was diagnosed with pneumonia.  He died in the 108th Street house within a few days.  The Druggists Circular announced his passing in extraordinarily florid prose.

Manufacturing pharmacy lost one of its high-class expotents, retail pharmacy one of its best friends, many pharmaceutical associations a loyal and energetic member, the nation a staunch citizen, and science and the liberal arts a generous patron when on February 13th Death entered the home of George J. Seabury and claimed him for its own.

Seabury's funeral was held in the house on February 16.  The following year, as Eugenia prepared to leave West 108th Street, a two-day auction of the art collection was begun on February 2.  In reporting on the sale The New York Times said "his collection covers a rich variety of styles and subjects," adding "The range of subjects is unusually wide, including paintings of French, Italian, German, and Oriental life of all degrees, and many fine paintings of animals and flowers."

The estate retained possession of the house, leasing it to upscale residents.  In May 1915 it became the home and office of Dr. H. Everett Russell.  He seems to have enjoyed an especially comfortable work schedule.  In announcing his move in the North American Journal of Homoeopathy he noted "Hours: 10 to 11 a.m., except Sunday."

The pediatrician was well-known within the medical community.  He had made waves in 1905 when he spoke out against the diphtheria vaccine being used by the Department of Health and which, according to The New York Times on June 22, "has the sanction of nearly every eminent physician in New York."

In a scene eerily similar to the vaccination scare which would appear nearly a century later, Russell assailed the drug as "extremely dangerous and a frequent cause of death to patients."  Other physicians were quick to speak out.  Dr. Francis Delafield countered saying "I think it's the only sure remedy for diphtheria," adding "So far as I known, it is the belief of the civilized world."  His implication was clear.

Russell had also attacked a staple of Edwardian millinery fashion--the long, often bejeweled hatpin.  On August 3, 1911 he wrote to the Board of Alderman to report that "For the past six months or more I have personally carefully observed the hatpins worn by women on surface cars, the elevated railroad, etc., and I have been surprised to find that nearly one-half of the hats worn by women have pins projecting anywhere from an inch to three or four inches from the brim."

Russell thought it was "about time" that a city ordinance was passed regulating the length of hatpins.  He warned the Board of the gravest consequences of the accessories--including death.  "These pins are a very serious danger to every man, woman and child on the City streets, more especially to the eyesight, but also to life as well, for a small crowbar of this sort is entirely capable of piercing the brain of its victim."

It is unclear how long the colorful doctor remained on West 108th Street; but by the first years of the 1920's it was home to the family of wealthy attorney Moses S. Adler.

The George J. Seabury estate sold the house in August 1925.  In reporting on the sale The New York Times reported "The purchaser is a Bostonian, who, after alterations, will occupy."  The was a familiar claim within the real estate community, one that quite often was not based on fact.

The residence where valuable artworks once lined the walls and rich furnishings adorned the rooms became a rooming house.  There were now an unbelievable 24 apartments and seven baths in the former mansion.  Its most colorful tenant moved in in the fall of 1932.

Louise Stadler had been a successful music teacher in Germany.  She was 38 years old when she arrived in New York with her 10-year old son that year.  Unable to find work in her former profession, she used what The Times called her "apparent culture and refinement" to embark on a career of crime.

Louise scoured the German-language newspaper want ads and then applied as a maid in upscale German households--always in Brooklyn.  The Times explained "Because she seemed to be an ideal servant, she usually was accepted at once."  But her employment never lasted more than a few hours.

For nearly two years she accepted jobs as Mme. Condi, pocketed valuables, and fled.  Police were at a loss to find any clues partly because she cleverly committed her crimes far from her Manhattan rooms.  On February 10, 1934 she started work in the home of Mrs. Ida Jantzer.  Six hours later Louise was gone and so were two diamond rings valued at $8,000.

Mrs. Jantzer's son-in-law, A. J. Taylor, had seen Louise walk by the parlor that evening, apparently headed to her bedroom.  Later another servant reported that her room was unoccupied.  "The police were called and a search revealed that a cord had been dropped from the room to the street," reported the newspaper.  After ensuring that someone had seen her dressed for bed, Louise dropped her street clothes out the window, then shimmied down the rope.  The rings were later found in a pawn shop, pawned for $290.

At six hours duration the Jantzer job had been her longest.  Police said "The shortest job she had held was one that lasted two hours."   Her crime spree seemed to come to an end when on March 8, 1934 she "was taken into custody in a furnished room at 330 West 108th Street, where she had been living."  She admitted to 15 thefts.

After serving her one-year prison sentence, Louise faced deportation.  She jumped her $1,000 bond and disappeared.  Had authorities looked at her last known address they would, unbelievable as it sounds, have found her.  Louise had rented a furnished room at No. 330 West 108th Street again.

And she took up her old career as well.  On September 30, 1936 she found a job in the Brooklyn home of Mrs. Rose Graff.  Her haul this time was not so impressive--clothing and jewelry valued at $125.  It was more than enough to get her into serious trouble, though.

Detective Victor O'Hara had been Louise's arresting officer two years earlier.  Now, on December 1, 1936 he was in a Brooklyn subway station when he recognized her.  It was the end of the line for Louise Stadler's life of crime in America.   That afternoon she appeared in court to face grand larceny charges.  The Times noted "A new deportation warrant was filed against her."

The Seabury house remained a warren of furnished rooms until 1987 when a renovation resulted in three apartments in the basement level, two each on the first and second floors, and on the third one apartment and half of a duplex that continued into the top floor.

Among the residents by 1991 were the Karg family.  On February 24 that year The New York Times noted that their "brownstone on the far Upper West Side is more than a home for them and their two children.  It is also the home of the city's only commercial gallery of contemporary African art."  The article pointed out that it "has managed to subsist for five years tucked snugly away in the living and dining rooms and upstairs study of the Kargs' West 108th Street home."  The gallery remained here through 2012 before moving to 2808 Broadway.

Although it has lost some of its architectural details, the Seabury house still hints at its once distinguished status in a neighborhood peppered with "high-class residences."