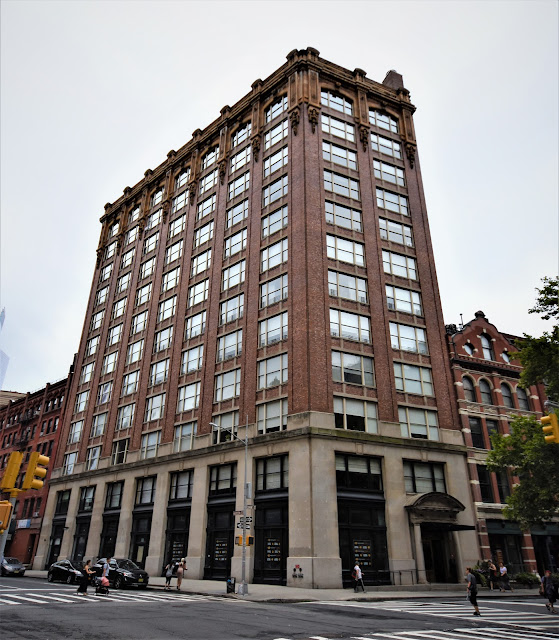 The sons of Hess Sonn, a German Jewish immigrant from Bavaria who listed his occupation as "peddler," Henry and Hyman Sonn joined forces early on.   In 1875 Sonn Brothers was listed in directories as fish sellers at No. 119 Warren Street.  Within the decade they had enlarged their business to "wholesale grocers."  While "grocers" sounds innocuous enough; a large slice of their business was in selling liquor by the turn of the century.

Around the same time they diversified by entering the real estate business, buying and selling properties and erecting buildings as far north as the Upper West Side.  Late in 1909 they looked closer to home--the wholesale grocery district around Hudson and Duane Streets.   The brothers purchased the seven old buildings at the southwest corner of Duane and Hudson Streets.

Sonn Bros. then negotiated with one of the largest shoe manufacturers in the country to erect a large, modern factory and office building for them.   On January 22, 1910 the Real Estate Record & Guide ran the headline "BUILDING FOR THE SHOE TRADE."  The article reported that "Messrs. Sonn Bros." would erect a 12-story structure which, "when completed will be occupied by Morse & Rogers, lessees, for their wholesale shoe business."  The shoe firm had already sat with architects W. L. Rouse and L. A. Goldstone to lay out their specific needs.  "The building is entirely fireproof and has been designed for the express purpose of meeting with the requirements of the lessees," said the article. 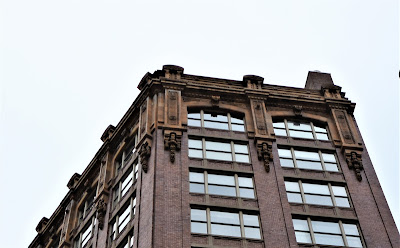 Rouse & Goldstone was well known for its loft and apartment buildings.  While the architectural style of the Morse & Rogers building was basically Renaissance Revival; the architects splashed it with Beaux Arts decorations at the top floor--garlands and scrolled keystones, for instance.  The main entrance, on Duane Street, took the form of a Renaissance columned portico supporting an arched pediment.  Confusingly, the building took the address of No. 25 Hudson Street.

The Record & Guide pointed out "It will include three elevators and especially designed hoisting and lowering apparatus for conveying packages to and from the various floors."  The red brick building on its two-story limestone base would cost the Sonn brothers the equivalent of $12 million today.   Morse & Rogers signed their 21-year lease on January 14, 1910, effective on March 1 the following year.

On March 3, 1912 the New-York Tribune noted that "Hudson street at this point is rapidly being improve with high class business buildings" and pointed out "the new twelve story building at Hudson and Duane streets, built by Sonn Brothers and leased to Morse & Rogers."

On December 21, 1917 The Sun reported "British war shoes for civilians are threatening to throw a wrench into the American retail shoe market machinery."  The Government sent out specifications of English women's "war shoes" to manufacturers.   Ben Jacobson, manager of McElwain, Morse & Rogers, was not afraid to speak out.  He said in part:

It is high time that somebody should intervene and get war styles out of the minds of the authorities.  If the dealers, who are now overstocked and scarcely able to see their way clear to buy stylish shoes such as women demand were to put in an additional stock of war shoes which nobody wants it would certainly create some dissatisfaction.

Nevertheless, the firm seemed to be weathering the war propitiously.  Three months earlier it had expanded its operations by purchasing the adjoining six-story building to the south, Nos. 13-19 Hudson Street.  Journalists and real estate dealers saw the move as forever changing the old grocery district into the new shoe district.

On August 5, for instance, The Sun opined "The purchase ties for all time the shoe district at this point and creates here a permanent shoe centre."  Despite the wartime problems, the article noted "The firm works a day and night shift in the matter of receiving and delivering goods and also occupies space in various warehouses."

The stable position of McElvaine, Morse & Rogers was further evidenced in its December 30 , 1917 advertisement in search of a "Young Man, Energetic, with executive ability, to take charge of claim and complaint department of large wholesale shoe house; fine opportunity for right man."

Shoe designers grappled with the wartime regulations creatively.  The following year, on September 19, The Sun reported on new styles by McElwain, Morse & Rogers.  "Of the shoes which comply with Government specifications one that is already selling well is very similar in style to an army officer's boot.  It is a woman's shoe, with a high, military heel, and whole quartered blucher pattern plan toe.  A handsome dress boot of recent manufacturer is of black suede, and practically seamless."  (One wonders if such styles were the source of a favorite insult thrown about by early 20th century boys, "Aw, your mutha wears army boots.")

Somewhat surprisingly, at the expiration of the long-term lease in 1931, the shoe firm left the Hudson Street building.  Space was now leased to various tenants, none of which had anything to do with the shoe industry.  Among the first was Field Publications, owned by the Chicago-based Marshall Field family.  It published the controversial P.M. periodical here, deemed by some as "radical."  Its articles were often politically-charged.

The newspaper received a maker-over in the late 1940's when it was renamed the Star.  It was here that renowned cartoonist Walt Kelly and his comic strip "Pogo" got its start.  The firm would go on to produce The Weekly Reader, as well.

Another of the initial tenants following McElwain, Morse & Rogers's leaving was Joseph Sullivan.  But his occupancy would be short-lived.  On July 1, 1931 The New York Times reported on more than 80 raids in the last two nights by Prohibition Administrator Andrew McCampbell's army of agents.  The article mentioned "In one of the raids yesterday Mr. McCampbell's men uncovered what they described as a wildcat brewery at 25 Hudson Street."  John Sullivan was arrested and the agents seized two 2,000-gallon vats of beer and a "1,500-gallon vat of the same beverage."

Throughout the next two decades the building saw a variety of firms come and go.  In 1944 The Oakland Company, Inc., manufacturers of "marine lighting," moved in.  It would remain for several years.  At the same time H & L Manufacturing Company was here; and by the mid-1950's Tru-Vue Optical Corp., makers of eye glass frames, was operating in the building.

The 1970's saw a a major change overtake the Tribeca neighborhood as factory buildings were recycled into galleries, restaurants and living spaces.  The industrial tenants of No. 25 Hudson had to find new homes when a renovation of No. 25 Hudson Street, completed in 1981, resulted in offices on the upper floors and shops at ground level.

The State of New York took three floors in the refurbished building as the new home for the Sanitation Department's medical facility.  But when the State announced it would move its Parole Division offices here from West 40th Street, neighbors in the edgy neighborhood revolted.  On February 7, 1982 The New York Times reported that the plan "faces opposition from the neighborhood's residents, who have voiced fear that the 2,700 former offenders who report to the board regularly will bring crime to this increasingly residential part of the city."

The article added "They also contended that the state had agreed to excessive rent for the new site at 25 Hudson Street, at the corner of Duane Street" and complained that there was no impact statement filed.

Spokespersons for the State fired back.  State leasing officer Rosetta Wynne said "This horror of parolees ganging up and roaming around the streets is utterly ridiculous."  Parole officials contended that the 90 armed officers would actually make the neighborhood safer.   And Paul Young, a parole agency spokesperson explained that state agencies were not required to file impact statements for relocation of administrative offices.  "I could see it if we were dumping nuclear wastes," he said.

Nevertheless, the hoopla reached Albany and on March 13 Anne Marie Santangelo, speaking for the agency, announced "We were informed by the Governor's office that we would not move.'

A nightmare occurred in the State's Sanitation Department medical facilities in January 1985 when a pipe froze and broke, spraying raw sewage throughout the clinic.  On January 24 the Health Department declared the space "unfit for human habitation."  Health Commissioner Dr. David J. Sencer explained the clinic was unfit because there was no drinkable water, "several floors are flooded with raw sewage due to broken waste lines" and "severe, noxious and objectionable odors are present."  It was a serious problem for days, preventing the medical treatment and examination of hundreds of sanitation workers.

In the meantime, Rachel's caberet opened at street level around 1983 and was a nighttime destination for years.  Shows like "I Can't Give You Anything but Lyrics by Dorothy Fields" in May 1984 drew crowds.  Fields's lyrics for composers like Jerome Kern, Sigmund Romberg and Cy Colemon included the songs "A Fine Romance," "On the Sunny Side of the Street," and "The Way You Look Tonight."

The former shoe factory was converted to "loft dwellings" in 2001, two and three per floor.  In its neighborhood of low-rise 19th century brick structures, the Morse & Rogers building--which changed the personality of the district from eggs and butter to shoes--stands out.