The House Where Grove Press was Born - 18 Grove Street


In 1829 carpenters Samuel Winant and John Degraw, both carpenters, merged their businesses as Winant & Degraw and branched into the building trade.  In 1839 they purchased the plots on the eastern third of the block bounded by Hudson, Grove, Bedford and Barrow Streets.  Within the year they began construction of four identical houses at Nos. 12 through 18 Grove Street.

Finished the following year the 21-foot wide Greek Revival-style houses were three stories of orange brick upon brownstone English basements.  Handsome but unassuming, the homes were modestly trimmed with stone lintels and sills.  The entrances were framed by the expected heavy stone pilasters and entabulatures of the style.

The good friends took the middle houses for themselves; Winant moving into No. 14 and Degraw into No. 16.  It is unclear who the original purchaser of No. 18 Grove Street was; but its location at the corner of Bedford Street made it the most appealing of the four with its extra wall of windows and side access to the rear yard.

The lady of the house dropped her expensive shawl in the fall of 1854.  An advertisement in The New York Herald offered at reward of $150 in today's dollars "to any person who may take a square French shawl to No. 18 Grove street, lost on Sunday, about 3 P.M., either in a car in Bowery, or in Bleecker street, between Bowery and Carmine."

The family living here would not have been wealthy, but financially comfortable enough to have at least two servants, a cook and a maid.  In a middle-class household like this one, a servant would be expected to take on several tasks, as evidenced in the February 21, 1860 advertisement for "A good, neat and competent girl wanted as a nurse and plain sewer; also to make herself generally useful."

The arrival of a new baby in the house no doubt prompted the need for a nurse.  The ad cautioned "None but those of an obliging disposition and in quest of a good steady place need apply."  That girl with an "obliging disposition" would earn between $5 and $6, according to the ad, or about $180 a week on the high end.

The following year, in October, the family left Grove Street and offered the house was for lease.  The advertisement promised "rent low; lease may be had," suggesting that if the family intended to return, it would not be for a long while.

The early years for Victorian children were especially tenuous and that year approximately one-third of all deaths reported in New York City were children.  On December 4, 1866 The Sun reported that 83 children in Brooklyn had died the previous week, ten of those from scarlet fever.

It was about the same time that Charles began showing symptoms.  The little boy died in the Grove Street house on January 3, 1867, just 11 days before his first birthday.   His funeral was held in the house the following Saturday afternoon.

Belle C. Bunn was a real estate operator in the neighborhood at the time and in 1910 owned No. 18.  She may have followed Pepe & Brother's lead when she initiated a "rebuild" of the house that year.  Although a few of the Greek Revival elements (like the doorway) survive, it was apparently Bunn who stripped off the exterior details and covered the brick with stucco.

A subsequent interior remodeling in 1921 resulted in two apartments in the upper floors and a doctor's office in the basement.

The house was purchased by Louise W. Bender, widow of Louis Bender, assistant treasurer of the New York Central Railroad, sometime after his death in February 1928.  Louise's estate sold the property in April 1945 to Aida Aliprando and Marion Booth.

Living in one of the apartments at the time was attorney and author Ambrose Doskow and his wife Naomi.  The two were a fascinating couple.  Shortly after graduating from Columbia University's Law School, Doskow had served as clerk to United States Supreme Court Justice Benjamin N. Cardozo.  Now a trademark litigation expert, he was the author of books like the 1940 Anti-Semitism and the Law in Pre-Nazi Germany and Historic Opinions of the U S. Supreme Court, published in 1936.

When Naomi Brodie Doskow died in February 1946 she was just 33-years-old.  But she had served as national secretary of the Junior Hadassah, the Young Women's Zionist Organization of America, and secretary of the American Zionist Youth Commission.

The following year Aliprando and Booth sold No. 18 to Cecil Associates, which resold it in November 1947.  The house became home to a newly-formed publishing firm, which took its name from the location: Grove Press.  The tiny company managed to publish only three books within the first three years, including the 1950 The Verse in English of Richard Crashaw.

The owners sold the business in 1951 to Barney Rosset for $3,000.  Under his direction Grove Press introduced avant-guard literature including several (at the time) controversial works deemed too racy by other publishers.  Samuel Beckett's play Waiting for Godot was among them.  The Beat Generation's Jack Kerouac, William Burroughs and Allen Ginsberg were authors and poets represented by Grove Press.

The firm's success necessitated larger quarters and in 1962 it was gone.  No. 18 was once again converted to two residences, an apartment in the basement and a single family home above.

It was the scene of a chilling attempted crime on December 1, 1964.  Police had been looking for an ex-convict, 38-year-old Shepard Campbell, for nearly a month after he had raped two Greenwich Village women.  Campbell had a record of 22 arrests.

That day two detectives spotted him in the Village and followed him in a car, but lost him when he climbed a fence.  The New York Times reported "Later, they heard a woman scream in a building at 18 Grove Street.  They captured the suspect as he ran from the building."

When the building appeared on the market in 2016 the 517 Group proposed to convert it to condominiums with  a cafe in the rear and a roof garden.  The firm's proposal said "The project has a more modern design to attract wealthy residents as well as wealthy investors."

Instead, it was reconverted to a single-family residence that included five bedrooms, a 12-seat screening room and a 5,000-bottle wine cellar.  Real estate listings boasted that Belgian designer and "antiquarian" Alex Vervoordt had "thoughtfully selected" all the interior details and that buyers would find the interiors "wabi-sabi"style; referring to the Japanese philosophy of simplicity and imperfection. 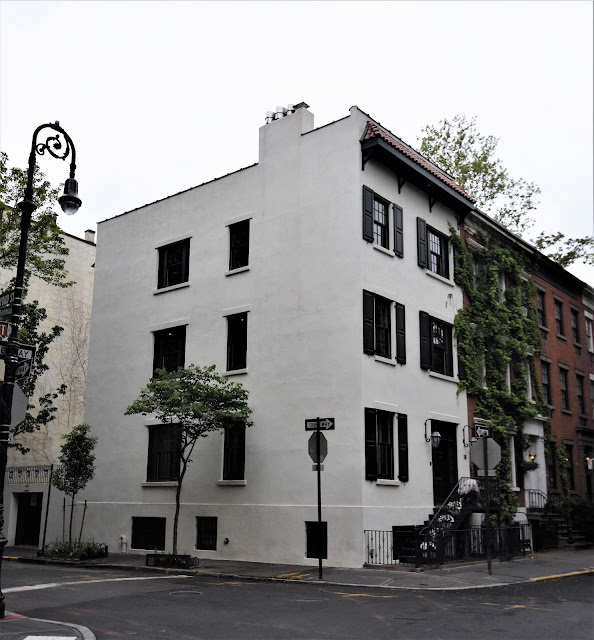 The renovated house also included a yoga a meditation room, a full-floor library with a wet bar and wood-burning fireplace, and a roof terrace with dining area and "lounge."  A Mediterranean-inspired tiled faux roof, in keeping with Pepe & Brothers early 20th century designs in the neighborhood, took the place of the long-lost cornice.  The sumptuous home was put back on the market in the spring of 2018 for $25 million.