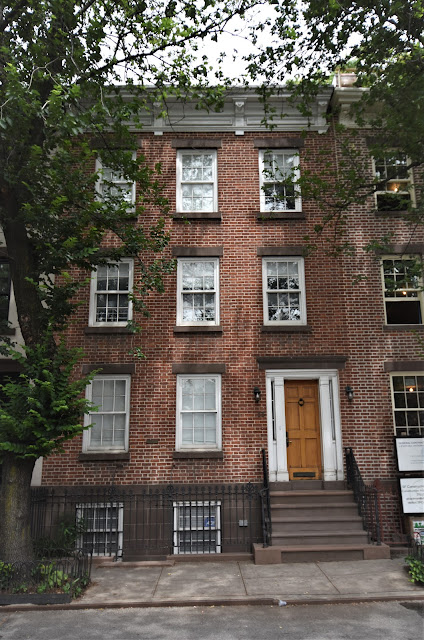 Perhaps no developer was more active in Greenwich Village in the 1820's than Charles Oakley.  In a single transaction the fall of 1819, for instance, he purchased 20 building lots.  Before 1830 he erected scores of wooden, brick faced homes--most often in groups of three or four--in the rapidly developing district still far north of the city.

In 1826 he completed four such houses on Commerce Street, Nos. 9 through 15.  Two and a half stories tall, the Federal-style homes were faced in Flemish bond brick.  The entrance to No. 13, above its stone stoop, conceded the working-class nature of the homes.  While the entrances to upscale Federal homes boasted ornate leaded transoms and sidelights, fluted columns and carving, this was handsome but understated.  Flat pilasters and narrow sidelights framed the single door.

Oakley originally leased the houses.  The tenants of at least three were involved in the building trade.  But by the early years of the 1840's No. 13 was owned by the Rev. Noah Bigelow.  Born on March 4, 1783, Bigelow had served during the Revolutionary War.  He and his wife, the former Sarah Jackson (who was known as Sally), had six children: Lucy, Sarah Jane, Sally Anne, Elijah, Samuel Merwin, and Ruth Grace.

Charles S. Pell was one of two teachers in the Boys Department of Grammar School No. 8 on Grand Street, near Wooster, in 1844.  The following year he was promoted to principal.

Bigelow was the minister of the Bedford Street Church, a position that entitled him to a tax break on his home.   After paying his property tax for 1843, he pointed out to the Board of Assistants that he had been over taxed.  In response the minutes of the Board's July 22, 1844 meeting noted:

The Committee on Annual Taxes, to whom was referred the peitition of Reverend Noah Bigelow, a clergyman of the Methodist Episcopal Church, to have taxes refunded to him for 1843, in Ninth Ward, in consequent of his being a minister of the Gospel report that Mr. Bigelow was assessed on one thousand seven hundred dollars, on No. 13 Commerce Street; that he is entitled to a deduction from his estate of one thousand five hundred dollars, by virtue of his clerical office.

On August 4, 1849 the New-York Daily Tribune ran a single-line article that read simply "Rev. Noah Bigelow, long and favorably known as a clergyman of the Methodist Church, died on Thursday morning, at his residence in this city."

Charles Pell inherited farmland land on the Upper East Side and began construction on a house at what would later be numbered 311 East 58th Street.  But never moved in.   Remarried by 1853, both he and his wife were teachers in the New York Orphan Asylum.  The position not only provided them lodging; but gave Charles the opportunity to flex his gardening skills.

Year after year he submitted his plants to the exhibition of the American Institute, and year after year he brought home awards.  In 1857, for instance, he his "twelve long blood beets" won second place; his "twelve turnip rooted blood beets," were first; and for his "best collection of cut flowers" he got a silver cup and $10.  He also brought home silver medals for his dahlias, "best collection of plants in pots," and chrysanthemums.

Sally Bigelow was evidently left alone in No. 13 after Samuel Merwin Bigelow died at the age of 24 on December 29, 1857.  His funeral was held in the house the following afternoon at 3:00.

Sally continued working within the Bedford Street Church, serving on the Committee for the Sick and the Church Committee in 1865, for instance.  The closeness of Sally with her grandson, Charles E. Pell, was evidenced by his acting as her "attorney-in-fact" by 1876.  He was actually not a professional attorney, but a partner in the lumber firm Dennat & Pell, and a real estate operator.

On December 3, 1886 Sally transferred the title of her home to Charles E. Pell.  The price was listed as "nominal," suggesting it was most likely a gift.   She died a few months later at the age of 102.

Pell quickly sold No. 13 to James. E. Bonesteel.    On March 11, 1887 plans were filed to update the aging home.  The plans called for "building to be raised, also other alterations, cost, $500."  The term "raised" meant that the attic would become a full-height third floor.   The nearly seamless addition included an up-to-date Italianate style cornice.

Bonesteel apparently never lived in the house, but leased it.  The Ferguson family was living here at the turn of the century.  Little Alva P. Ferguson died in the house on April 13, 1903 at just 7 years old.

The house changed hands for $1.4 million in 2002; and then in the spring of 2007 it was purchased for $4.1 million.  Designer Steven Riddle was hired to do a massive make-over.  The Federal interiors disappeared in favor of glamour.   Period-inappropriate mantels took the place of Federal originals.  The house was placed back on the market in January 2008 for $5.25 million.

Because No. 13 sits squarely within the Greenwich Village Historic District, no alterations could be made on the exterior.  The 1826 ironwork survives, and outwardly the house looks little different than it did in 1887 when James Bonesteel raised the roof.