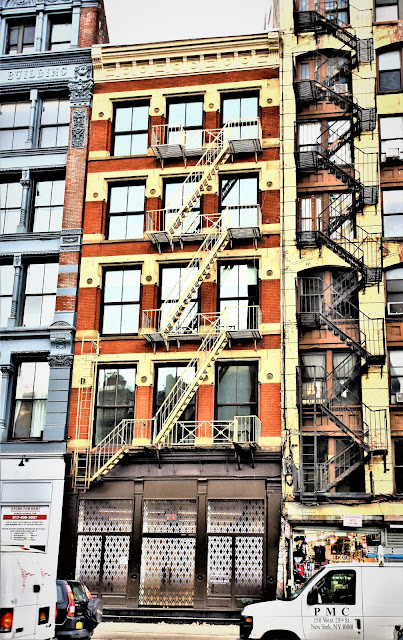 In 1879 attorney William Mitchell conceived of a project to replace the old brick commercial building at No. 334 Canal Street and the wooden structure on Lispendard Street directly behind it with a modern store and loft building.   Doing so would be a relatively long process.

In February the following year architect William E. Bloodgood filed plans calling for a "five-story brick store" with galvanized iron cornice.  The cost of the structure was projected at the equivalent of about $792,000 today.

Bloodgood came from a long line of builders and, in fact, had been listed in directories as a mason before opening his architectural office.  Not surprisingly, the contract for erecting No. 334 Canal Street went to Freeman Bloodgood, most likely a close relative.

In 1883, four years after Mitchell had first laid plans, the building was completed.  Bloodgood had turned to the trendy neo-Grec style, using contrasting white stone and red brick above the cast iron storefront to produce a striking effect.  The inherent geometry of the architecture was carried on in the cornice where pressed rectangles were separated by pairs of circles between the brackets.  The rear facade, at No. 37 Lispenard Street, was a slightly less enthusiastic version of the front.

The upper floors were leased to Carl L. Rose & Cohen, manufacturers of "cloaks and jerseys."   Shortly after moving in, in July 1884, Carl Rose took on a partner, Meyer G. Cohen, who had just moved to New York from Athens, Georgia, where he had been in business for 15 years.  Things went along smoothly for the partners--for a while.

Newspapers diplomatically said the two men "quarreled."  The situation became unworkable and they agreed to part ways.  Carl Rose, however, made the better deal.   Cohen agreed to pay him $25,000 (a satisfying $665,000 today) for his share and to take over all the firm's debts.

Things went downhill for Meyer Cohen.  Optimistic, he "bought heavily" in the spring of 1889, but subsequent sales were mediocre.  He was left with a large amount of unsold stock and in order to pay his overhead he "endeavored to tide over by borrowing largely from two banks," according to The New York Times.

On September 5, 1899 100 girls showed up for work at No. 334, only to find the doors locked.  They waited around confused on the sidewalk several hours.   The Times summed up the situation saying "The big five-story manufactory of Meyer G. Cohen...was closed all day yesterday and Mr. Cohen could not be seen."  Cohen's attorney painted a grim picture.  "Mr. Cohen had failed and had gone to pieces."

Several smaller firms took the place of Meyer G. Cohen.  Among them was wholesale apparel firm Herman Schuman & Co.  In the summer of 1891 the company found a new bookkeeper in Henry M. Barnes.  He had recently relocated from Chicago where he had worked for Marks Bros., another wholesale clothier.  It would appear that Herman Schuman & Co. narrowly dodged a bullet.

On Friday, October 2, Detective Foley arrived at the office and arrested Barnes.   A few days earlier Police Inspector Thomas F. Byrnes had received a letter from R. W. McClaughry, Chief of Chicago Police.  It told a tale that could have been plucked from a melodrama.

The Sun began its flowery report on October 4 saying "On the desk before Justice O'Reilly at the Tombs yesterday was a small photograph of two faces.  One was that of a man 32 years old with black moustache and clear-cut features.  On his shoulder a beautiful girl with dark hair and bright eyes reclined her head."

The man, of course, was Henry M. Barnes, and the girl was Emma Stern, "who is said to have been a belle in Chicago."  The two had fallen in love.  But rather than marrying and being content with the lives of a bookkeeper and his wife, they had grander ideas.  On June 5 Barnes stole $2,500 from his employers and he and his sweetheart fled to New York with the intentions of going to England to live.

Instead the money ran out.  Barnes found his job at Herman Schuman & Co. and Emma was hired in the chorus of a stage troupe, "Castles in the Air."  Barnes's impulsive felony for love garnered him nothing more than a prison sentence.   At the time of his arrest Emma was on stage "in the West."

Other manufacturers in the building were David M. Geber, "dry goods and hosiery;" L. Reiss, makers of "knee pants;" and Morgenstein & Robinson, cloak makers.  The grueling schedule of garment factory workers before the turn of the century was evidenced in the State's factory inspection report in 1896.  Morgenstein & Robinson employed 50 men, 25 women, and 10 girls under 21 years old.  They all worked 56 hours during the week and 8.5 hours on Saturdays.

A small fire that broke out in the building on May 31, 1895 did not cause damage to it nor to the tenants' factories or stock; but it ruined a police officer's career and reputation.   Officer Francis J. Clarke had been on the force 18 years.  The day before, Memorial Day, he had gone to Calvary Cemetery with his Grand Army Post to lay flowers on the graves of soldiers.  The day was very hot and Clarke suffered heat exhaustion.

Nevertheless, he showed up for work at 8:00 the following morning, although he complained of not feeling well.  When the call of fire at No. 334 arrive around 10:00, he answered it.  After helping search for the cause of the alarm, he went outside and sat down on the sidewalk.  Another officer, Michael F. McLaughlin, asked what was wrong.  "I ain't very well, Mac; I am very sick," he reportedly answered.

After McLaughlin brought him a glass of water, Clarke felt he was well enough to resume duty.  He walked through No. 334 and out onto Lispenard Street, where he again had to sit on the pavement.  By now fire fighters had arrived and somehow Clarke's brother had heard that there was a sick policeman in the store.  Knowing his brother had been ill the day before, he rushed to the scene.

Court transcripts documented that "his brother recognized him, ran out, and brought him a glass of whiskey."  He said "Here, Frank, take this and it will bring you around all right."   Clarke returned to the station house, too sick to go home.

His brother's good intentions landed him in police court, faced with multiple charges including intoxication on the job.  On August 10, 1895 The Sun reported "Patrolman Francis J. Clark [sic] of the Leonard street station was found guilty of being under the influence of liquor and dismissed from the force."

By 1901 Barrett, Nephews & Co. had taken over the entire building.  The Staten Island dyeing establishment had been founded in 1819 and still operated its large dying plant there.  The Canal Street location was used for "pressing and finishing."

One of Barrett, Nephews & Co.'s youngest employees earned unexpected press coverage in 1906.  Charles Levy, who was 15 years old, lived with his family on Clinton Street.  On Sunday morning, June 17 he went out to meet friends.  Before long a boy told Charles's young sister, Rachel, that Charles "had been lured away by a big, tall man and taken to Philadelphia."

Rachel rushed home, pulling the boy along.  He repeated the story--without many details--to the Levy family.  The Sun reported "They rushed over to Police Headquarters and a description of the missing Charles was wired to Philadelphia straightaway."  An hour later police picked up Charles as he got off the train.  "But no report came of the capture of anybody answering to the description of the kidnapper," wrote The Sun.

As police investigated closer to home, the mystery began to unravel.  Charles's friend, Theodore Arkin, did not recall seeing a kidnapper; but he did admit "that Charles had been talking with the boys about Philadelphia for a week past, saying what a splendid town that was for any bright, wideawake young fellow to get a start in."

As it turned out, Charles was avoiding corporal punishment at home.  At the Philadelphia police station he confessed "I wasn't kidnapped.  I was only hiding.  You see I lost $10 belonging to my father and I was afraid he might lick me, so I framed it up with another boy to go tell father that a strange man had carried me off and then I ran away."

The bookkeeper for Barrett, Nephews & Co. in 1908 was William C. Candlish who, sadly for him, had an eye for the ladies.   On Friday July 24 he left the office to deposit $129 in the bank.  But he never came back.  The firm notified the police and he was arrested at his home the following Sunday night.  The New York Times reported on July 28 "the police say he admitted he had spent the money on chorus girls."

In 1913 Barrett, Nephews & Co. cautiously entered the motorized age.  It purchasing a "self-propelled delivery vehicle" to test among its scores of horse-drawn trucks.  The results were heartening.  On April 1, 1914 The Power Wagon reported "For the past year the Barrett, Nephews interests have been using a Chase truck with such success that they are pretty well convinced, according to the expression of Secretary William Chayne, that motor transportation is the only solution of delivery-to-customer problems."

For whatever reason, customers saw a marked increase in the price of new garments following the end of World War I.  The trend resulted in increased business for dyers and dry cleaners like Barrett, Nephews & Co.  On July 10, 1919 president Henry B. Palmer explained to a reporter from the New-York Tribune, "High prices for garments are forcing Americans to be more chary about their expenditures for clothing...In my judgment many men, among them clerks and public employes, and even professional men, after looking twice at their outer garments and then measuring the cost of buying a new suit of clothes deem it expedient to have the old suit restored by the cleaners' process."

The cost savings extended to household textiles, as well.  "Housewives of an economical bent of mind who find it now costs as much, if not more, than in war time to buy curtains, blankets and portieres, are invoking the aid of the cleaner in an effort to make the old things last as long as the warp and filling of the fabric hold together."

The increase in business seems to have required additional staff.  On May 19, 1920, for instance, Barrett, Nephews & Co. placed ads for several different positions.  One sought a "Young woman, office work, at the executive offices of large dyeing and cleaning establishment;' splendid opportunity to learn bookkeeping."  The starting salary for that job was $183 per week in today's dollars.

The firm suffered a tragedy later that year when 67-year old director John David Barrett was struck by a train in Greenwich, Connecticut station.  How he ended up in the path of the train is unclear, but he died the same day without regaining consciousness.

After having occupied No. 334 Canal Street for more than a quarter of a century, Barrett, Nephews & Co. purchased the property from the Mitchell estate in 1927.

The firm remained in the building until about 1964.  Afterwards No. 334 was home to a variety of business, like the United Blower Co., Inc. here in the 1980's.   A transformation came in 2014 when the upper floors were converted to one spacious apartment per floor.