From Brewery to Off-Broadway - 38 Commerce St, the Cherry Lane Theatre 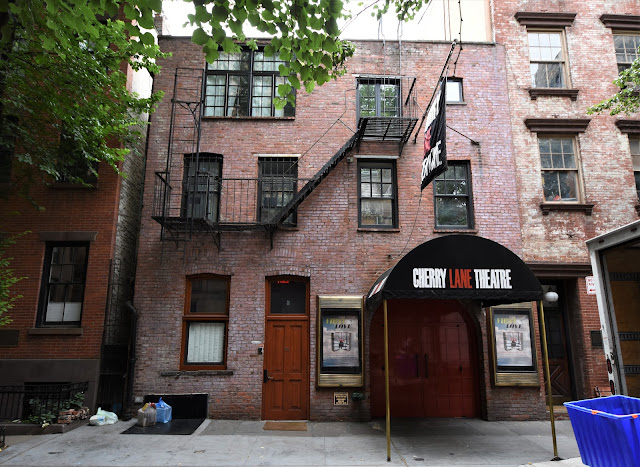 On November 24, 1827 Alexander McLachlan pressed a local brewer name Bacon for payment on a loan.  Unable to pay, Bacon executed a mortgage of $1,523 to McLachlan against the $3,000 debt (around $76,000 today).  The mortgage included "his stock of beer, malt and hops, together with the brewing utensils, hogsheads, barrels and kegs in the brewery" as well as "two horses, two drays and the harness of same, a pleasure waggon and harness."

Court papers revealed that "the mortgage was to be void on payment of the sum of $1523 on or before the 24th May, 1828."  McLachlan, according to the courts, was "frequently in the brewery, but never interfering in the business, or intimating that he had any control over the property."  Bacon kept his financial trouble hidden from his employees and his creditors.  Until the due date to pay McLachlan rolled around, that is.

In the spring of 1828 McLachlan found himself the owner of a brewery.  Rather than sell the business, he embraced the role of brewer (perhaps due to those frequent visits).  In 1836 he leased land from the Gomez family, which owned much of the surrounding property, and constructed a new brick brewery on Commerce Street, a few feet west of Bedford Street.

McLachlan's choice of sites is a bit surprising.  At the time similar businesses were cropping up nearer the riverfront.  The neighborhood of Commerce and Bedford Streets was quiet, residential, and still sparsely developed.

McLachlan's architect made no attempt to pretend this was anything but a utilitarian structure.  The three-story brewery featured a double-doored truck bay where horse-drawn wagons would come and go laden with loads of heavy barrels.

Sometime in the late 1850's McLachlan moved his business to No. 99 Greenwich Avenue, where he advertised "Croton Ale from Alexander McLachlan, Brewer and Maltster."  The Commerce Street building was used by T. R. McDermott in the early 1860's, most likely as a tobacco warehouse.  Charles McDermott was an established tobacco merchant at the time.

In 1873 the building became the storage warehouse of Jas. Michales & Son.  The firm touted its modern improvements, perfect for the storing of valuable household items.  An typical advertisement in 1874 read:

Storage Warehouse--For furniture, pianos, baggage, &c., in separate rooms, and low rates; separate department for pianos, mirrors, paintings, &c.; we invite the attention of parties who intend to store their furniture to our accommodations for the storing of goods, style of rooms, light, ventilation, &c.; all goods taken up and down on elevators; the warehouses are guarded day and night by private watchmen."

Michales & Son appears to have gone out of business in 1878.  An advertisement in The New York Herald on May 29 that year offered: "Nine upright showcases, with stands, for sale cheap to pay charges."

In 1923 Alexander McLachlan's brewery building underwent a conversation to a theater.  The Provincetown Players commissioned Cleon Throckmorton to design what would be named the Cherry Lane Theatre.  (As was happening throughout the neighborhood, an expansive window was installed on the top floor to accommodate an artist's studio.)  The tiny auditorium with its 200 seats opened in May the following year.

The Cherry Lane Theatre saw a succession of managers and theatrical companies.  In 1927 the New Playwrights took over; and on January 22, 1930 The New York Times noted that the theater would open that week "under the management of Paul Gilmore.  'The Short Cut,' with Helen Holmes in the leading role, will be the play."  Gilmore would continue to manage the theater for its succession of troupes for a decade.

Seven years later, on August 16, 1937, the newspaper announced "The American Show Shop, 38 Commerce Street, will test another new play this evening.  Call it 'That Rib of Adam,' written in blank verse by a lawyer, Franklin G. Manley."  The edgy production exemplified the avant garde offerings the theater would become known for.

In October 1939 well-known Broadway producer Richard Herdon announced that he and a group of associated had leased the theater "with a view to trying out a series of revues for possible presentation uptown."   The auditorium was updated, including a restaurant  At the same time the second floor was converted to a lounge, dressing rooms and two apartments.  There were now four apartments on the third floor and two on the fourth.

Herndon's venture was short-lived and by 1941 the Cherry Lane Theatre was home to the Savoy Opera Guild, which staged operettas.

On November 27 that year The Times noted "After the three final performances of Gilbert and Sullivan's 'Iolanthe' tonight, Friday and Saturday nights in the Cherry Lane Theatre...the Savoy Opera Guild will present 'The Mikado.'"  Apparently The Mikado was a box office success.  The group revived it in 1942 and in 1943.

Next to move in was the Hedgerow Theatre which opened on January 16, 1945 with Eugene O'Neill's The Emperor Jones.  Critic Lewis Nichols was less than complimentary in his review.  "Unfortunately, it is necessary to shoot the silver bullet at this point; the Hedgerow's production is not the best the play has seen hereabout during recent years."

The Gilmore Stock Company was here in 1948, and the newly-formed Off Broadway, Inc. in 1949.  Off Broadway opened on  June 6 with Gertrude Stein's Yes Is for a Very Young Man, a play about France during the Nazi occupation.  The small cast that night was made up of a young Anthony Franciosa, Michael Grazzo, Bea Arthur and Kim Stanley.

The Madonna Players opened with a new production of Jerome K. Jerome's The Passing of the third Floor Back on April 26, 1951.  But the end of the line for the little theater appeared to be close at hand at the time.  Within the year it was announced that the building might be demolished to erect an apartment house.

But locals came to the rescue.  On September 29, 1952 The Times announced "A group of civic-spirited residents headed by Kenneth Carroad outbid commercial interests and acquired title from the Gomez family, which had owned the structure since 1819."  The newspaper reminded readers that the Cherry Lane "has always been a laboratory for experimental plays," adding "Theatres of this kind have their place and purpose as proving grounds for ideas, actors, directors and scenic designers.  There is always the possibility that another Eugene O'Neill or Robert Edmund Jones may emerge."

The venue continued to present new plays and introduce fledgling thespians.  When Paul Vincent Carroll's drama The Wise Have Not Spoken was debuted on February 10, 1954, its sets were designed by Edgar Lansbury, brother of actress Angela Lansbury.

A glance through the playbills reveals names which would later become well-known to theater, television and motion picture audiences.  Among the cast of To Be Young, Gifted and Black in January 1969 was Cicely Tyson.  Others who appeared on the stage were Kevin Bacon, Barbara Streisand and Gene Hackman.

The theater was in bad shape in 1994 when it closed its doors.  It sat vacant for two years before actress, singer and dancer Angelina Fiordellisi purchased the property for $1.7 million and refurbished it for another $3 million.  (Two years later, in 1998, she opened an even tinier theater, the Alternative Space, next door.)

Unfortunately, the Cherry Lane Theatre found itself $250,000 in debt in 2010.  In December Fiordellisi announced that she intended to sell.   But once again, reaction was swift.  On August 24, 2011 Fiordellisi reported that a "steady stream of theater bookings" had flowed in.  She told reporters that the entire debt would most likely be erased within the year. 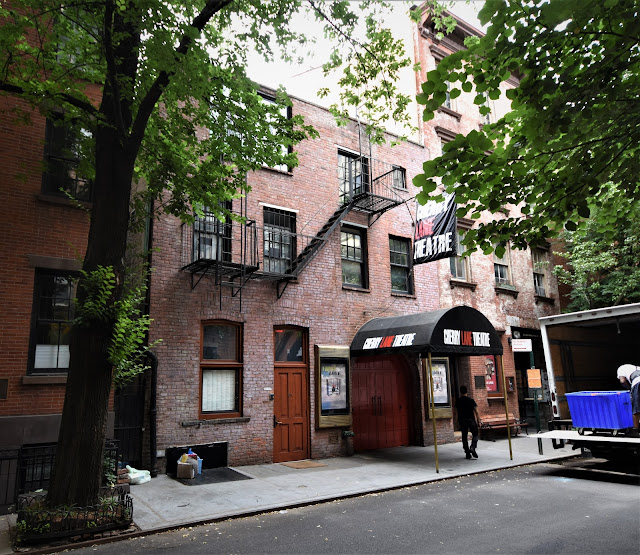 The historical significance of Alexander McLachlan's 1836 brewery building certainly is not based on its architectural beauty.  And while its piecemeal alterations and no-nonsense industrial personality create an undeniable charm; it is the story of the nearly 100-year old Cherry Lane Theatre here that makes the Commerce Street building an important piece of Greenwich Village and American theater history.