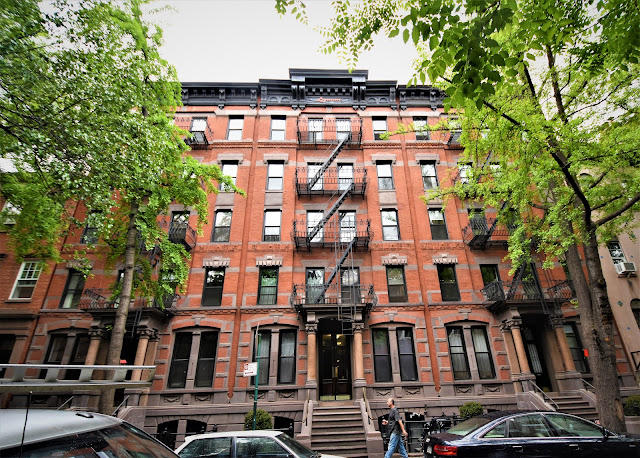 James Kyle & Sons were a bit different from most developers of "French flats" in the 1880's.  They not only constructed them, but managed their operation.  In 1888 the firm demolished the old homes at Nos. 33 through 37 Grove Street and hired architect Frederick T. Camp to design three modern flat building on the site.

Camp was best known for his apartment buildings, having designed large structures like his 1883 Imperial Flats, throughout the city.   James Kyle & Sons, for reasons unclear, would name this combined trio The Lyceum.

Camp filed the plans on March 23, 1888, clearly noted "three five-story brown stone flats."  The physical separation of the sections may have had much to do with fire safety.  Each, according to the plans, would cost the equivalent of $400,000 today.

Construction was completed within eight months.  Camp's grab bag of styles resulted in a stately edifice of red and brown.  Five stories of red brick sat upon a rusticated brownstone basement.  The first floor exhibited elements of Victorian Gothic in the polished granite columns with their stylized medieval capitals, and the striped effect of rough-cut brownstone bands.  Panels below the windows featured classical swags.

Camp decorated the second floor openings with unusual lintels formed of projecting rough-cut stone.  Directly above, a bandcourse of terra cotta tiles exemplified Queen Anne and Aesthetic Movement motifs like sunbursts and sunflowers.   Another terra cotta course of ferns and flowers ran below the fifth floor.  The center structure, No. 35, was clearly the centerpiece and its paneled and bracketed cornice was just a bit grander and announced the name "Lyceum." 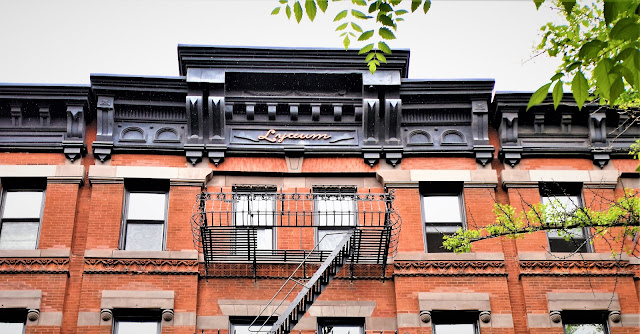 On December 1, 1888 James Kyle & Sons placed an advertisement in The Sun that read:

There were, of course, no refrigerators as we think of them today in 1888.  The term most likely referred to built-in ice boxes.  But the inclusion of mirrors and carpeting raised the Lyceum slightly above most flat houses.  The mention of "Turkish bath" is interesting.  Such amenities were not uncommon as early as 1882; but they were most often in more upscale apartment buildings.

Despite its modern conveniences, the Lyceum's tenants were of modest means.  Their names appeared in newspapers not connected with teas and receptions; but for the sometimes unfortunate incidences of the working class.

On August 6, 1895 Margaret Graham, who lived in No. 33, had had enough of her brutish son, George.  She made a complaint that he "was in her premises using threatening, abusive, and insulting language, with intent to provoke a breach of the peace."  (We can assume the court, and not Margaret, was responsible for the wording.)

The following day George was arrested and sentenced to six months in the workhouse on Blackwell's Island.  Margaret was infuriated three days later when she found that George was "again at large."  She was back in court to complain on August 14, but the judge's sympathies were not on her side.  While her attorney insisted that "the language of the law was very plain," Magistrate Deuel responded, "Yes, but we must also take cognizance of the spirit of the law."

Julia Lawson, who lived at No. 37, thought she had problems with her son, as well.  When Charles Hahr arrived at her door on December 8, 1891 saying that her son had been arrested for stealing $20, it apparently made perfect sense to her.  Hahr said that her son, who worked as a messenger boy, was being held at the Gerry Society (known today as the Society for the Prevention of Cruelty to Children).  But if she would repay the $20 he could get the boy released.  Julia only had $2.05, but Hahr took it and said she could pay the remainder on installments.

Later that evening the boy came home from work as usual.  It was then that, according to The New York Times, Julia "learned that she had been swindled, as the boy had neither been arrested nor had he stolen anything."

Within two weeks Charles, "alias Morris, alias Harris, alias 'Napoleon' Wood, and his brother Henry," as reported in The Sun, were arrested for "on suspicion of being flat-house thieves."  Julia was in court to testify along with at least four other victims.

Charles J. Brewer also lived at No. 37.  The same year the Lyceum was completed he was hired as a delivery clerk for the American Steamship Line at Pier 43 on the Hudson River.  On the morning of September 27, 1893 the 34-year old went to work as usual.  But troubles weighed heavily on him.

Baggage Master Madden and the pier watchmen heard a loud splash.  On the surface of the river a black derby hat floated.  After a long search Brewer's body was finally recovered.  He had tied a canvas bag around his waist holding about 100 pounds of small stones to ensure the success of his suicide.

The street-wise children who lived in the Lyceum attended Public Schools.  Among them in 1895 was Austin Chester Bamford, who went to Grammar School No. 69.  The well-behaved Bamford and some of his friends were concerned about "the cigarette habit" in the school.  So they formed the Confederated League of the Anti-Cigarette Leagues of the City of New-York.

The first meeting was held in Austin's apartment on January 19, 1895.  Among the rules the boys agreed to that day was the the club's President "must be a pupil of the first grade."  The New York Times reported "The boys are enthusiastic over the prospects of the newly-formed Confederated League, and predict that it will be the means of driving the cigarette habit from the public schools of this city."

Although W. H. Ball reported having "no business" in 1905, he did have an income.  On March 28 he was arrested and charged with "aiding and abetting a poolroom" after detectives raided the third floor offices in the Fulton Building at Liberty and Washington Streets.  A "poolroom" at the turn of the last century had nothing to do with billiards, but with illegal horse betting.

Living in the same building around that time was bartender William Fisher.  On his way home after the bar closed on July 28, 1907 he was ambushed by four men on Bedford Street.  The New York Times reported "While he was down on the sidewalk, being kicked and pounded, one of the men robbed him of his watch and chain worth $40."

Patrolman Beggs arrived in time to arrest all four men; but not before Fisher suffered a broken nose and cuts on his face.

French-born Ernest Etienne and his wife Leonora, moved into No. 35 in 1904.   He was a chef in the Hotel Brevoort on Fifth Avenue and 8th Street.  It did not take the other women in the building long to notice the frequent visits of architect Louis Faresin to the apartment when Ernest was at work.

In the winter of 1906 the Etiennes had a house guest, Louise Spiess, visiting from Paris.  She was busy washing some articles of clothing on February 13 when she heard Faresin enter the apartment.  She could not help overhearing their conversation and later recalled, "I heard him say to Mrs. Etienne: 'I love you and you know it.'

"Then she answered: 'Please go away.  You know my husband is jealous, and if he came in now he would kill you.'  I heard him shout to her, 'Well, are you coming?'

"She answered 'no,' and then I heard a shot fired.  I ran out screaming for help and there was another shot."

The New-York Tribune reported "The tenants in the house were startled by the pistol shots.  Several ran to the street and summoned Patrolman Brazler...He found the bodies and called a doctor for the woman, who was still alive."

Leonora was hit three times and died shortly afterward.  Faresin had fired the gun into his mouth.  About half an hour after the coroner arrived, Ernest came home.  "He said he had never seen or heard of the man before," said the Tribune.

The buildings continued to house blue collar residents, including policeman Patrick Donahue who lived at No. 33 in 1921.  Also in the building was another officer, mounted policeman James J. Fagan.   Fagan was on duty at around 11:00 on the night of September 10, 1922 when an automobile struck his horse, Mexican, from behind.  Fagan was thrown into a telephone pole and suffered a broken back and concussion.  The New-York Tribune reported "The automobile kept on at increased speed and escaped."

There was little hope that Fagan would survive and The New York Times added that Mexican "was also seriously injured, and may died with his master."

On February 8, 1928 patrolman Fletcher H. Varrelman caught sight of a stolen car at Canal and Elizabeth Streets.  He blew his whistle and held up his hand, but instead of stopping, the car sped up and two of the four men inside began shooting at Varrelman.

The gunshots alerted the men of the nearby Elizabeth Street Police Station and about 20 officers descended on the scene.  The crooks scrambled in various directions.  "The neighborhood was in an uproar," said The New York Times.  Before long all four men were in custody, including 22-year old Michael Langfeld, who lived at No. 35 Grove Street.   He later confessed to "several recent hold-ups in and about Greenwich Village," said the newspaper.

Another criminal, Edward O'Brien, lived at No. 35 five years later.  His career came to an end on the night of May 28, 1933 when he and three others held up the Alcove Club at West 47th Street.  They locked the patrons and the proprietor in the refrigerating room, then emptied the cash register.  Their take--$26.80--was not worth the consequences.

As they rushed out, they were confronted by two detectives on the street.  When Edward Quinn went for his gun, Detective Charle Kane shot him in the abdomen.  He died a few days later.  In the meantime, O'Brien and the other two waited for trial in jail.

In 1984 the monstrous, aged boiler in the basement was replaced.  It was temporarily placed in the rear courtyard.  Thirty-five year old Raymond Petrocelli lived here at the time and his 8-year old brother, Russell, came for a visit from Brooklyn on December 16.  The happy reunion turned horribly tragic.

The New York Times reported that little Raymond "ran ahead of his brother and into a courtyard of the building."  He climbed up on the boiler, which fell over and crushed him to death. 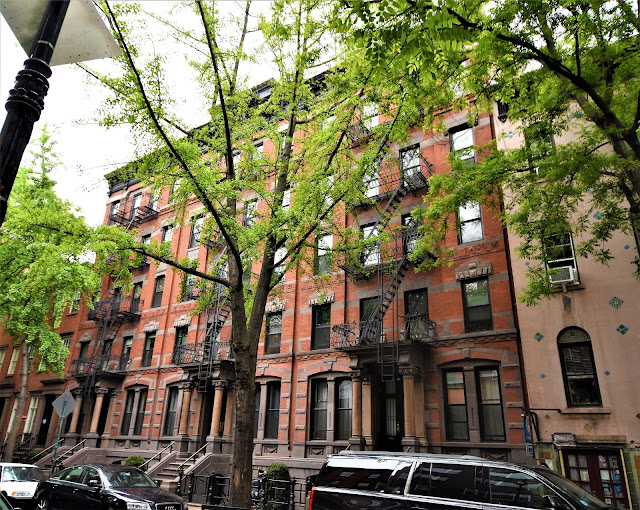 The Lyceum, with its colorful and often sketchy history, is outwardly little changed since James Kyle & Son boasted of its "modern improvements."