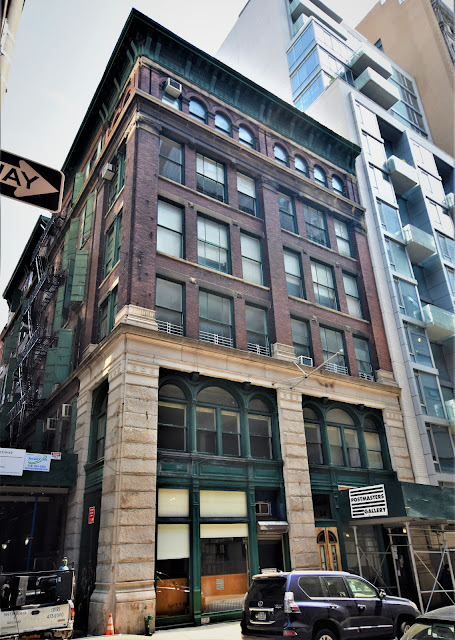 Visitors to the Foley Square courthouses today might pass through the Collect Pond Park.  Its name is the last reminder of the 48-acre body of water that reached a depth of 60 feet in some sections.  During the mid-18th century it was a popular destination for picnics in the summer and ice skating in the winter.  But the expansion of the city brought tanneries, slaughterhouses and similar businesses that dumped their waste in the lake.  By the end of the 18th century it was derided as "a very sink and common sewer."  By 1813 the entire Collect Pond had been filled in.


With the odorous problem eliminated, Sugar Loaf Street was extended east to Broadway in 1816 and its name changed to Franklin Street, in honor of Benjamin Franklin.   The street soon filled with respectable brick faced homes.  But by the end of the Civil War, those houses began being replaced by commercial structures.

Behrens turned to the currently popular Romanesque Revival style--just as John B. Snook Sons had done at Nos. 152-154 Franklin Street.  But the two would be widely different.  The John B. Snook Sons structure was remarkably light and airy with great expanses of glass.  Nos. 54-56, completed in 1892, was a much more somber take on the style.

The two story base of rough-cut stone framed a handsome cast iron storefront.  The overall stern personality of the building was tempered by the graceful arches of the second floor--their spandrels decorated with cast iron garlands and brackets.  Behrens ignored the expected arched openings at the mid-section, preferring no-nonsense square headed windows instead.   But at the top floor, above a projecting stone cornice, he produced an attractive arcade--each opening separated by piers with stone capitals, and connected by brick eyebrows.


Among Williams's earliest tenants were commission merchant G. F. Jempson; the Home Soap Company; cutlery, hardware and gun dealer Herman Boker & Co.; and F. L. Harding, manufacturer of "unique valentines, tally cards and the 'Handy Tally Cabinets," as described in The American Stationer.  By 1898 Clucas Publishing Company was in the building, as well, publishers of trade journals like the Commercial Enquirer and the Commercial Reporter.

Ironically, on the very night of the Tribune's article fire broke out in Herman Boker & Co.'s Franklin Street space.  Two days later The New York Times reported that the firm suffered damages equaling more than $300,000 today.   The blaze did not spread to any other floors.

The following day The New York Times reported "After all was quiet he fell to work with such a will that when his bookkeeper left him he did not take the precaution to tell him to leave the key to the front door in the regular hiding place, so that he could get out."   It was a regrettable mistake, for when the bookkeeper got to the street door, he absent-mindedly put the key in his pocket and went home.

Two hours later Van Der Veer turned out the lights and headed down the stairs.  He felt around behind the radiator where the key was normally hidden.  Thinking that it had possibly fallen, he groped around in the dirt under the radiator, coming up with only a few loose nails.  Pounding on the door was useless.  Franklin Street was deserted.

The Times said "Then he went to the top floor again, muttering things about the bookkeeper, and called up Police Headquarters on the telephone."  Three policemen arrived to rescue the imprisoned executive.

The first years of the 20th century saw two of the long-term tenants leave.  On January 31, 1901 The Pharmaceutical Era announced that "Increasing business and urgent need for more room has driven the Home Soap Co. from 54 and 56 Franklin street, where they have been for several years."   And two years later to the day The American Stationer reported that F. L. Harding had moved.  "The constantly increasing demand for these well-known Harding goods has made this move necessary."

The removals did not signal problems for F. Hoyt, who had purchased the building from Williams for $250,000 in June 1895.  No. 54-56 continued to attract tenants, including the Boland Commission Co., the Maintenance Company, which took the third floor in February 1904, and wholesale paper merchants Osborn & Wilson, and Wilson & Towne Paper Co.

The Maintenance Company had been established in 1897.  It was an interesting, early example of a contract equipment repair firm.  A 1907 advertisement promised that "Machinery protection costs but a trifle and may be the means of saving you thousands of dollars' loss, aside from the hazard to lfie and limb."  The firm scheduled regular inspections, repairs and routine maintenance of elevators, pumps, motors and dynamos.

The ground floor store was home to Benj. McCabe & Brother in the first years of the 20th century.  An advertisement in the American Carpet & Upholstery Journal gave a hint of the broad array of floor coverings the wholesaler and importer handled.  "Carpets, Rugs, Cocoa Mats and Matting, China and Japan Matting, Linoleum, Etc."

By 1909 the Schenck Chemical Co. was making its patent drugs here, including its Dr. Edwards' Dandelion.  An advertisement in the Vermont newspaper, The Bennington Evening Banner on March 6 that year promised that Dandelion was the

Best Known Remedy for Rheumatism and Malaria.  Stimulates the kidneys so as to eliminate the uric acid that causes Rheumatism and Kidney Disease, regulates a Torpid Liver; acts gently and without griping on the bowels; disinfects the entire Alimentary Canal and produces a clean, smooth Skin and clear Complexion, by eliminating all poisons from the system.

In 1920 the Robert Roy Co., dealers in stationery, took the second floor.  The firm immediately placed a help-wanted advertisement in the New-York Tribune for a "telephone operator [with] some knowledge of typewriting."

Robert Roy Co.  would be a long-term tenant, remaining at least for two decades.  By then it shared the building with the Apr Burr Printing House, which took space in 1941.

The Franklin Street building was a pioneer in conversion of Tribeca factories to residential space.  In 1977 it was converted to two apartments per floor above the ground floor, with a single apartment on the sixth floor. 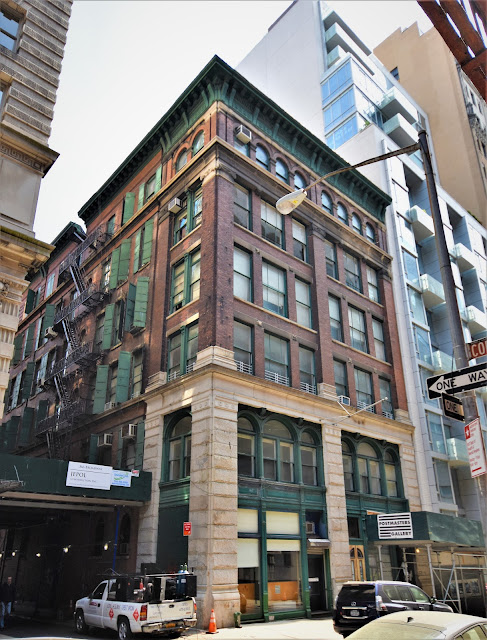 The Franklin 54 Gallery was at street level in 2004; occupied today by Postmasters Gallery.  In need of a gentle cleaning, the 1892 structure is remarkably intact.