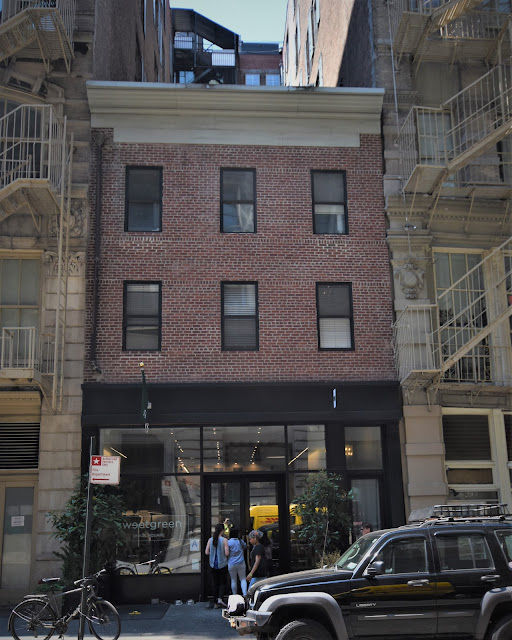 By 1845 mansions had begun appearing along Fifth Avenue around 18th Street.  But Robert Pettigrew's home at No. 8 East 18th Street completed that year, was not so pretentious.  Nevertheless, at 25-feet wide and three stories tall, it was a commodious residence.  Nothing remains of its original appearance, but a 19th century photograph reveals a short stoop, white stone lintels that contrasted with the red brick, and a bracketed cornice.

In the first years following the Civil War, Mrs. C. Donovan ran her dressmaking shop from the lower level of the house--an indication of the changes already taking place in the neighborhood.  The rest of the residence was let as furnished rooms.  An advertisement in The New York Herald on July 1, 1868 offered "To Let--Furnished, one suit of rooms, including Parlor, at No. 8 East Eighteenth street, two doors from Fifth avenue."

Mrs. C. Donovan catered to the carriage trade.  Her expensive French-styled designs were worn by the wives and daughters of New York's wealthy businessmen.

At the time of that advertisement, the address had become connected with an infamous incident.  Irish-born Bridget McCabe lived in rooms here and worked as a maid in a nearby brownstone.  Much to her annoyance she obtained a roommate in 1871--her sister Rose.

Rose McCabe was 23-years old in 1854 when she was recruited by Bishop Thomas Louis Connolly into a new order of nuns to care for Irish orphans in Canada.  Rose became Sister Mary Stanislaus of the Sisters of Charity.  Things went well until she angered her superior, Mother Vincent, and eventually the bishop himself when she continued to speak out against Mother Vincent's treatment of the orphans.  In 1861 she was put on a boat and sent back to New York.

After teaching in several schools, Sister Mary found herself out of work and moved in temporarily with Bridget.  The relations between the sisters was tense and things came to a climax on March 14, 1871 when Bridget rushed into Sister Mary's room.  Sobbing, she said their sister, Eliza, was near death and they must go to her at once.

It was a cruel ruse and the carriage took the women to the Bloomingdale Insane Asylum.  Bridget, like so many family members, had devised a simple plan to rid herself of her unwanted relative.  She declared her sister insane and claimed she had attempted suicide.

Unlike less fortunate inmates, Sister Mary managed to find supporters in the outside world.  Her case--likely because of her religious status--drew the attention of the press.   John D. Townsend took her case and on August 13, 1872 they appeared in court.  He told the judge she was "of perfectly sound mind" and had been committed "at the instance of interested parties," her sisters.

The New York Times commented that Sister Mary "appeared in Court in the habit of her order, and is apparently possessed of much refinement and intelligence."  A week later Sister Mary Stanislaus was released from the Asylum.  But it was not the end of the story.

She was taken in by the family of Michael J. McCarthy.  But, as reported in The New York Times on January 4, 1874, "shortly afterward her sister, Bridget McCabe, demanded her custody on the ground that she was the proper person to maintain her."

While Bridget might have been satisfied that her sister was being taken care of and no longer a burden; she seems to have had a cruel hatred for her.   When John D. Townsend learned from McCarthy that Bridget was gone from the home, he tracked her down to East 18th Street.  "He learned from Sister Mary that her treatment there was far from what it ought to be, and she again sought his aid."

Townsend approached Bridgett and "told her that her sister complained of ill-treatment and was very unhappy with her."  He offered to take charge of Sister Mary, and pay her support until she was received back in the Church or found employment.

The Times reported "Miss McCabe would not listen to the proposition, and much against Sister Mary's wishes, counsel was obliged to leave her in her sister's care."

The story did have a happy ending, however.  Bridget was eventually pressured to give up her control.  Sister Mary was taken into the family of an Episcopal clergyman on on 72nd Street.  The Times noted "Mr. Townsend says that Sister Mary has been for more than a week in [Rev. French's] family, and if he had ever doubted her mental correctness all such doubts would not be dispelled, for a more sensible and devoted lover of her Church it would be difficult to find."

In the meantime, Mrs. C. Donovan's business continued to thrive.  On a single day in October 1874 she placed three want ads in The New York Herald, one of which sought "a forewoman to take full charge of workroom; one who fully understands her business."  The following year, in September she look for "A smart errand boy, from 12 to 14 years, for a dressmaking establishment.  Apply at No. 8 East Eighteen street, basement door."

In 1881 the house was converted for business.  The entrance was lowered to sidewalk level, a storefront installed, and the first floor extended 26 feet into the rear yard.  The ground floor shop became home to Louis Hartman's "Artistic Picture Framing" store.   His advertisements touted "Largest assortment of Designs for Bronze, Gilt, and Wood Frames, at most reasonable prices."  The store also re-gilded old frames or damaged frames.

Mrs. C. Donovan moved her shop to No. 245 Fifth Avenue; but another garment maker, M. F. Saliade moved in.  Many dressmakers at the time worked under pseudonyms, calling themselves Madame, for instance, to suggest a French connection.  M. F. Saliade's real name was Mary F. Sharpe and she was trying valiantly to make it on her own following terrifying domestic abuse.

She and her husband, Henry E. Sharpe, had lived together with their 2-year old daughter, Henrietta, on Joralemon Street in Brooklyn.  But as she later told the courts, he had "often abused and beaten her, and on one occasion had thrown her down stairs."  After one incident she had him arrested and in January 1885 they separated pending divorce proceedings.  It was a contentious case, with Henry demanding one half interest in Mary's plaiting (or pleating) business.

Mary moved into No. 8 East 18th Street with her daughter, and opened her shop.  Although Henry was allowed visitation, he never came to Manhattan to see Henrietta--until six months later.

On Sunday afternoon, July 19, Mary took Henrietta to Union Square.  When they returned about an hour later Mary left Henrietta in the vestibule while she rushed upstairs for a moment.  When she came down, the little girl was gone.

Coincidentally, the next day Henry appeared to visit his daughter.  Mary was irate and demanded he return the child.   Claiming he knew nothing of her disappearance, he went to the police, saying "he feared that the child had been stolen or was being secreted by his wife."   Mary countered, telling a reporter "she was sure that her husband had taken the child away for the purpose of coercing her into giving up some property to him."

Sharpe did his best to paint his wife as the culprit, going so far as to serve her with a writ of habeas corpus requiring her to produce the child in court.  Mary did not back down.  On July 24 The New York Times reported "Mrs. Sharpe insists that her husband has taken possession of the child and that his informing the police of the disappearance of the little one and obtaining the writ of habeas corpus are simply subterfuges to divert suspicion from him."

When suspicion continued to be focused on him, Sharpe came up with another theory.  He told a reporter from The Sun "As I am the head of the integral cooperation movement in this country, there are opposed to me many of the Anarchists, who are making a bitter war on me...They wouldn't stop to do anything to injure me because of my position.  They know how much I am attached to the child."

Mary saw through his new explanation.  "There was no one to take [the child] away but Sharpe, and I want him to return it  to me.  I'll have none of his fooling."

Tragically for Mary, it would seem that Henry won both the battle and the war.  Later that year an advertisement in Harper's Bazaar offered work to "hand-pleaters."  The name of the establishment was now, "Henry E. Sharpe, 8 E. 18th St."

By now Louis Hartman's frame shop was gone and Taylor & Son's piano store had moved in.  The neighborhood was filled with piano and organ dealers at the time.  On April 20, 1886 dozens of them, including Taylor & Son, joined together, agreeing to institute what today would be called "summer hours."  An announcement in the Music Trade Review said "We, the undersigned, piano and organ manufacturers and dealers, music publishers and dealers, hereby agree to close our respective places of business at one o'clock on Saturday, during the months of June, July and August."

In the fall of 1892 a "well-dressed woman of lady-like manners," according to The Times, entered the store and purchased an upright piano on terms.  After Mrs. Julia McLaughlin made her first $15 installment, the payments stopped.  An employee of the store went to the fashionable address where the piano was delivered, No. 46 East 85th Street, to see what the problem was.

Mrs. McLaughlin appeared at the door with tears in her eyes and explained that her daughter was upstairs at the point of death.  "He expressed regret for having called at so inopportune a time and withdrew," said The Times.

At the same time two other piano dealers, E J. Winterroth and W. Wisner & Sons, were having the same problem.    On January 5, 1893 The Times reported "When Mrs. McLaughlin was next sought she had moved, and the firm discovered that she was merely in the house as a sort of janitress to take care of it til the family whose home it was returned."

Julia McLaughlin was finally tracked down in Jersey City and arrested.  The pianos were never recovered.

At the turn of the century the piano and music district had moved uptown.  In 1902 the building was leased to the New York and Amsterdam Carpet Company.   The storefront was altered in 1904 for H. J. Klappert's restaurant, which would remain in the space for several years.

In 1916 Humboldt Mfg. Co. moved in. makers of ingenious gadgets like the Kant-Klog sugar and salt shakers.

The little building housed a variety of business throughout the subsequent decades, including a bookstore in the 1930's.  Around mid-century the entire facade was given a new brick face, successfully eliminating what remained of the 1845 design.

The early 21st century renaissance of the neighborhood was evidenced when Hemant Mathur opened Devi, an Indian restaurant, in No. 8 around 2004.  The acclaimed eatery was a destination spot for years.  In 2015 a new storefront was installed and today Sweetgreen, a health food restaurant, calls the ground floor space home. 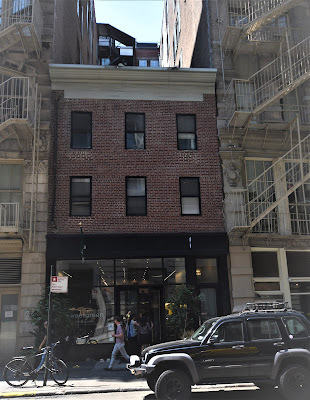 Despite near 175 years of changes, the Pettigrew house retains its domestic appearance--an interesting footnote on the architecturally fascinating block.