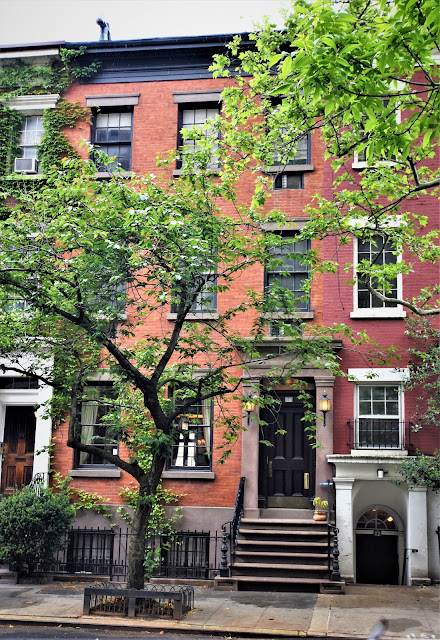 In 1820 23-year old Samuel Winant opened his carpentry shop at No. 17 Jacob Street.  Seven years later John Degraw did the same--his was at No. 11 Watts Street.  It appears the two men were already good friends.  Both of their families were originally from Long Island, and for a period they volunteered together with the Hook & Ladder Company No. 3 on Vandam Street, just steps away from Winant's home.  (Interestingly Peter Winant, Jr., no doubt a relative of Samuel, was also a firefighter with that company in 1821.)  Winant and Degraw both resigned from the fire house in 1830.

In 1828 the two merged their businesses as Winant & Degraw.  Their close personal relationship is reflected in the fact that Degraw began using No. 50 Vandam Street--the home of Samuel Winant--as his address.  He may have leased a room, or was simply taken in by the family.

Winant & Degraw was successful and in 1839 the partners purchased the plots on the eastern third of the block bounded by Hudson, Grove, Bedford and Barrow Streets.  In 1840 they began construction of four identical houses at Nos. 12 through 18 Grove Street.

The 21-foot wide Greek Revival-style houses were completed within the year.  Three stories of orange brick sat upon brownstone English basements.  Handsome but unassuming, the homes were modestly trimmed with stone lintels and sills.  The entrances were framed by the expected heavy stone pilasters and entabulatures of the style.

The good friends took the middle homes for themselves--Winant moving into No. 14 and Degraw into No. 16.  It is unclear how long the Winant family remained on Grove Street, but when Samuel died at the age of 71 on September 21, 1868, he was living in Rossville,Staten Island.

As early as 1857 the family of William H. Demarest was living at No. 14.  That year his 12-year old son, George Francis, attended Public School 38.  While some teen boys at the time cut their education short to find employment, George continued on, graduating in 1864 having "completed the full course, with modern languages."

It is not surprising that the boy's father placed importance on education.  William Demarest was a highly-valued employee of Harper & Brothers publishers.  Having started with the firm around 1832, he was now "chief cashier," a much more executive job than the term implies today.  He was not only in charge of the financial books, but kept strict records of the sales of titles and reported those numbers to their authors, like Herman Melville.

Demarest's exact accounting was evidenced in an incident in 1857 recalled by The Publishers Weekly decades later, on March 23, 1912.  Demarest "used to relate with a great deal of gusto that one morning, after John Harper had opened his mail and passed out the cash from the letters for record, the money was found twenty-five cents short.  He reported the matter to John Harper, who, in a laughing way, turned to his brothers and said: 'Demarest is making a great ado because I took twenty-five cents from the mail and gave it to a beggar.'"

Demarest's daughter, Sophia, was named after his mother, who apparently lived with the family.  The younger Sophia was married Edward W. Rachau in fashionable Grace Church on January 29, 1862.

The following year the bride's grandmother died in the Grove Street house.  Three days after Sophia Demarest's death at the age of 69 on January 11, 1863, her funeral was held in the home.

By the end of the decade William Demarest's health was failing.  An advertisement in The New York Herald on May 27, 1871 suggests that Sophia and her husband had moved into the house, possibly because of William's condition.  "Wanted--A girl to take care of a baby; must come well recommended."

The health of their employee of four decades did not go unnoticed by the Harper brothers. The following year, on April 25, 1872, The Publishers' and Stationer's Weekly reported:

A few mornings since Mr. Demarest was requested to step into the private office of the firm.  Here, without formal palaver, it was intimated that he might possibly have been a trifle overworked of late, and that a brief holiday would not be unacceptable.  For that purpose he was accorded six months' leave of absence to go abroad, his salary meanwhile to be continued, and to enable him to enjoy the trip comfortably, and as an indication of their friendship, they handed him a check for five thousand dollars.  Truly a pleasant thing nicely done.

Demarest never returned to Harper & Brothers.  The family moved to Jersey City where his wife, Eliza, died in November 1876.

In the meantime, No. 14 became home to developer Thomas Ball and his wife.   In March 1873 they looked for household help.  "Wanted -- A girl to cook, wash, iron and make herself generally useful; reference required; German preferred."  It would seem that the only responsibility not included in that broad job description was caring for the Balls' toddler.  Three months later they were seeking "a young girl as nurse, one who will make herself generally useful."

The Financial Panic of 1873 resulted in soup kitchens and bread lines similar to those that would become familiar to New Yorkers in 1929.  On March 18, 1874 The East Broadway Soup House listed recent donations from more fortunate citizens.  Included was Thomas Ball's $10 "for the purpose of buying 100 loaves of bread."  Interestingly, the notation listed his profession as "property owner."

Ball was responsible for substantial building projects, like the five-story store and tenement designed by John B. Snook on Madison Street in 1878.   The family remained at No. 14 until November 1891 when they sold it "on private terms" to Philip Sammet.  He quickly flipped the house, selling it to Margaret Johnson a month later.

Margaret ran it as a boarding house.  Among her tenants in 1894 was a draftsman, who was temporarily out of work.  His ad in the Engineering Record in September called him a "first-class map and engineering draghtsman."  His resume included 20 years experience "including six on railroad and nine on municipal work."  Giving his address as "Draughtsman, 14 Grove Street," he added that he was a "good letterer."

It was possibly Margaret Johnson who leased the basement level to a small commercial laundry.  The 4-man staff attempted to unionize in 1898 with unhappy results.   The Documents of the Senate of the State of New York in 1899 noted "On December 15th, 4 laundry workers employed at 14 Grove street, New York city, went on strike against the employment of a nonunion workman.  The men on strike had not been members of the union themselves until a few days previous to the strike, and their employer refused to force the man objected to to join their union.  the strike was not successful, and the strikers not only lost the strike but their positions as well."

While rooms continued to be rented throughout the ensuing decades, the house remained unchanged.  In the 1930's playwright Howard McLellan lived here.  He wrote his three-act play The Unknown Man here in 1931.

In 1966 a conversion was begun to convert the house to a duplex in the basement and parlor floor, and one apartment each on the upper stories.   In 1968 the Landmarks Preservation Commission lamented in its Greenwich Village Historic District designation "Until 1966, No. 14 was perhaps the last completely unaltered Greek Revival building in the City."

Apparently Dr. Gary Lazachek both lived and ran his medical office from the duplex in the 1970's.  He drew the attention of  the Congressional Subcommittee on Long-Term Care of the Special Senate Committee on Aging.  The subcommittee, which investigated Medicaid fraud, questioned the $131,956 in Medicaid funds he received in 1975.  That amount would be more in the neighborhood of $601,000 today.

Edward F. L. Bruen and his wife, the former Marian S. Gray, appeared in print for loftier reasons.  They were listed in the Social Register of New York while living here in 1985.

Despite the LPC's sorrow over the 1966 interior renovations, No. 14 Grove Street greatly maintains its 1840 outward appearance and integrity; an important presence on one of the city's most charming blocks.