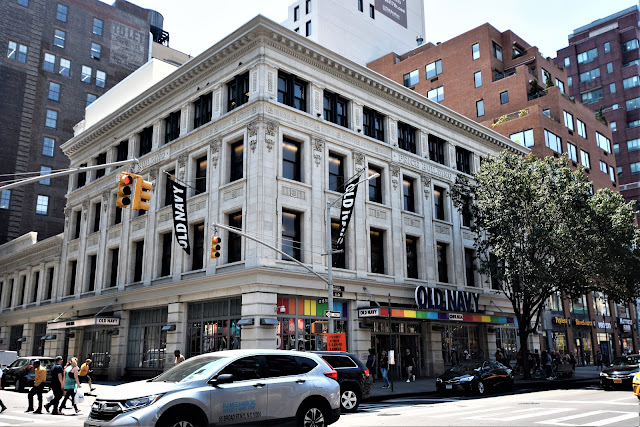 David Price opened his first women's clothing store, D. Price & Co. around 1887.  The Tammany Times later remarked "From the beginning of its career this firm has cultivated the intelligence, taste, judgment and discrimination of the women of New York."  Around the turn of the century Price staked his place as a major women's outfitter by establishing a store on Sixth Avenue, along the "Ladies' Mile."

Price leased No. 286 Sixth Avenue, at the southeast corner of 18th Street, from Henry Morgenthau.  In 1906 he enlarged the store by spreading south into the two adjoining buildings.  He hired architect Frederick Jacobsen to update the four-story brick and stone store and loft buildings.

When Price renewed his lease in August 1910 he had already demolished the old buildings and commissioned the architectural firm of Buchman & Fox to design a modern store.  A month earlier, the Real Estate Record & Builders' Guide reported David Price had already leased half of his proposed store, and that Henry Morgenthau had also leased the plot on West 18th Street, directly behind.

"Two new buildings corresponding in architectural design will be built, covering the entire property," the article said.  "An out-of-town concern is the lessee of the store from Mr. Price, as well as of the rear plot from Mr. Morgenthau, so that plans provide for a large establishment on 18th st, with an entrance from 6th av."   Buchman & Fox would be responsible for the design of both buildings.

The "out of town concern" that leased the 18th Street building was J. G. McCrorey & Sons, which The New York Times said on July 24 "operate a chain of 5 and 10-cent stores in Western cities."   Both buildings would proudly announce their owners' names in terra cotta.

While the completed Price Building was unquestionably the alpha dog of the two structures, they were designed to architecturally coexist.   Costing $150,000 (nearly $4 million today) the four-story Price Building was clad in white terra cotta.  Its tripartite design included a nearly all-glass street floor storefront of arcade entrances and show windows.   The two-story midsection was sparsely decorated with spandrel panels between floors and snarling lions' heads between each bay.  The stately top floor sat above a cornice and frieze decorated with Greek key and floral tiles.  A modilioned cornice crowned the design.

The McCrorey Building was long and low, just two stories tall.  Buchman & Fox married the two structures by carrying over decorative elements--near-matching upper window surrounds.  Above the cornice a terra cotta parapet, identical to those on other McCrorey buildings, added dimension.

In October 1912 The Tammany Times commented in Price's new fall line.  "A magnificent display of cloaks, suits, waists, skirts, furs and gloves is now on display at the establishment of D. Price & Co. Nos. 278-286 Sixth avenue, corner Eighteenth street."  The article commented that the store had a reputation "of carrying nothing but the highest possible grade of goods that could be offered for a given price and absolute elimination of cheap and shoddy fabrics from its stock at all times."

At the time of the article the Ladies Mile had greatly changed.  The grand emporiums that once drew well-heeled shoppers had mostly abandoned Sixth Avenue, moving north of 32nd Street.  Price himself opened a new store on 34th Street.  In July 1913 he hired architect Walter G. Steinle to "reset store fronts" to the store.  It was possibly at this time that the retailer broke up the ground floor into smaller shops.

By 1916, in addition to the 34th Street store, D. Price & Co. had a branch in Brooklyn and another in Newark.  Nevertheless, Price maintained his offices in the Sixth Avenue building.  When he hired Kate Cohen as his waist buyer that year (shirt waists were tailor-fitted blouses, the most popular women's apparel item of the time) the American Cloak & Suit Review noted she "makes her headquarters at the Sixth Avenue store of D. Price & Co. and looks at sample lines of waists there every Wednesday forenoon."

David Price altered the storefronts again in September 1917.  The alterations, designed by J. M. Felson, cost him about $9,500 in today's dollars.

In the meantime, Price had amassed a significant personal fortune.  He and his wife, Sadie, summered in Newport and lived in a spacious apartment on West End Avenue.  The couple endured a horrific incident on August 14, 1918.   Tillie Adler had worked as a maid for the Prices for 12 years.  Sadie found a note that morning asking her to make sure Tillie's estate be given to her son, who was currently on Randall's Island.

The maid's body was found in the courtyard, seven floors below.  She had jumped from a window in the apartment sometime during the night.  The Evening World reported "A nervous breakdown is believed to have been the cause of the suicide."

The change to the personality of the Price Building and the Sixth Avenue neighborhood in general was evidenced in the circumstances surrounding the death of a West Virginia banker president in August 1920.  James Ready operated a pool room in the Price Building.  He and his assistant, "Joe Klein," shared lived together in a rooming house.  The banker's body was found in the their room.

Police said that Edmund H. Crim was "found early Sunday morning sprawled in a strange room on the second floor of a West Thirty-fourth Street rooming house--pockets turned inside out and diamonds gone."  The banker had died of alcohol and morphine.

The McCrory store (the firm dropped the "e" around 1914) was the scene of a startling incident on July 19, 1921.  Concetta Alesi stole a 10-cent powder puff--at least she tried to.  The New-York Tribune reported that, according to police, she "had filched the powder puff and was about to quit the store when the store detective, Hattie Walters, accused her of the theft."

The newspaper continued "Not speaking English well enough to argue about it, Concetta is said to have uncorked a powerful right hand swing which landed on Miss Walker's jaw and knocked her out."  While the detective lay unconscious on the floor, Concetta reportedly bit her on the arm and on the leg.

Patrolman John Shaw dragged Concetta off the women, but got her only as far as the street.  "There she spied a fruit peddler's cart and the thought struck her that Shaw would look sweet in a setting of bananas and pears."  The 31-year old powder puff thief had already proven she was a robust woman when she knocked out Hattie Walters with a single punch.  Now she lifted Officer Shaw off his feet and attempted to toss him into the fruit cart.  "It was a creditable attempt and nearly upset the cart, but it failed," said the Tribune.

Luckily for Shaw another officer appeared on the scene.  "Together the two patrolmen by alternatively shoving, lifting and pulling Concetta through the streets brought her to the lock-up."

David Price died pf a heart attack at the age of 60 in his West End Avenue apartment on April 7, 1922.  He left his estate of more than $1 million entirely to Sadie.  It sparked the beginning of a long and ugly court battle by extended family members who tried to invalidate the will.

In 1925 Sixth Avenue was renumbered, giving the Price Building the new address of 604-612.

The McCrory's store remained on 18th Street at least through the Depression years.  In March 1932 the Chain Store Age was impressed with a window dresser's ingenuity.  "A window which was artistic while showing the customer just what was needed to duplicate a sample jardiniere filled with living plants, was noted in a McCrory store on West Eighteen Street, New York City."   By interspersing live "snake plants" among Asian-style crockery, the designer suggested their possible uses to shoppers.

In 1936 architects Hinogue & Palmer converted the Price Building to showroom and factory space.  It was indicative of the decline of the neighborhood.  Throughout the subsequent decades the once-haughty retail palaces would sit vacant or become filled with small industrial companies.

In 1949 Knickerbocker Motors joined the Price and McCrorey buildings.  The Sixth Avenue storefronts were removed and the first floor gutted to create an automobile showroom.  Garage doors were installed in the McCrorey Building and it was converted to a service garage.

Change finally came in the latter part of the century as the Ladies' Mile was rediscovered.  By 1993 the Housing Works Thrift Shop called the old McCrorey Building home. and in 1995 Old Navy renovated both buildings for its spacious store.  The make-over included an architecturally sympathetic storefront installation. 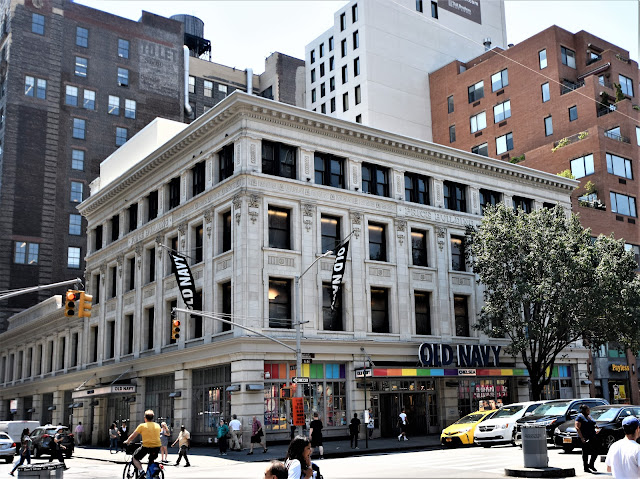 While nothing remains of Buchman & Fox's 1910 storefronts, the upper floors of both buildings sparkle; their striking terra cotta facades essentially unchanged.