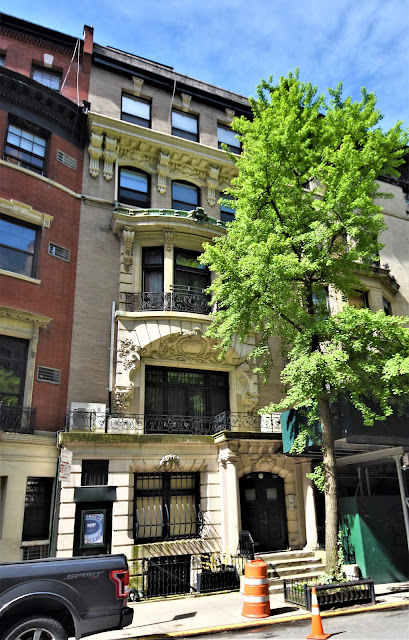 Prolific developer Joseph A. Farley and architects Janes & Leo were by no means strangers in October 1898.  As a matter of fact, their offices were in the same building, at No. 967 Boulevard (later renamed Broadway).  The men had worked together on several projects of speculative, upscale rowhouses on the Upper West Side.  They embarked on yet another, now, with the architectural firm filing plans for four side-by-side homes on October 7.

The houses, Nos. 316 through 322 West 108th Street, would be four stories high and faced in brick.  The plans projected the construction costs at a total of $110,000 (or about $837,500 each today).  Janes & Leo mysteriously designed the row as three harmonious Georgian Revival homes and one Beaux Arts beauty with absolutely nothing in common with its stepsisters.

No. 322 featured a rusticated stone base (as opposed to the planar stone of its neighbors) with a projecting columned portico.  The upper floors were faced in beige brick and lavishly trimmed in limestone.  At the second story French doors within an elaborately carved enframement opened onto a full-width balcony with French-style iron railings.

Matching iron railings decorated the bowed bay of the third floor, which was capped by handsome copper cresting.   An ornate, bracketed cornice supported a stone-balustraded balcony at the top floor.

The row was completed one year later.  No. 322 was the widest, at 25 feet.  Light filled the vestibule through a full panel of glass in the door, "projected by a black iron grill," as reported by the Real Estate Record & Guide on September 2, 1899.  "The hall floor is parquetted, and the hall itself contains a large fireplace surmounted by a stepped hood with fire seats on either side."

The service entrance opened onto the long hall leading to the back of the house where there were "a bicycle or butler's room, kitchen and laundry."  The first floor contained the drawing room, music room, dining room, and butler's pantry.    The drawing room was, as might be expected, French in style, paneled in white mahogany and trimmed in gold.  The dining room was "of English Gothic design" and "appropriately trimmed with black oak and lit by ornamental leaded glass windows, with a swinging sash in the corner."  All the first floor rooms had parquet floors and fireplaces with gas logs--the latest in convenience and cleanliness.

A stained glass skylight spilled light down the staircase.  Directly above the drawing room was the library, paneled in dark mahogany.  The master bedroom was also on the second floor.  The Record & Guide described "A salon passage containing four large hanging closets, a washstand, closets, drawers, and a full length cheval glass, leads into a bedroom trimmed in birdseye maple, adjoining which, further on, is a completely appointed bathroom, floored in mosaic, paneled in white and gold and furnished with all the best appliances of lavation."

The Record & Guide was taken with the layout for servants' smooth operations.  "Rear stairs give the servants access to the upper floors and convenience is further studied by a dumbwater running from the kitchen.  The butler's pantry contains every conceivable necessity, including porcelain-lined refrigerator and plate warmer."

No. 322 was purchased by the 53-year old Benjamin Newton Disbrow.   Society seems to have greatly forgotten, or at least overlooked, the scandal the dragged his name into the newspapers 13 years earlier.

Disbrow's wife, Jeannette, left their Brooklyn home in the spring of 1886 to move in with her sister and brother-in-law, the Harrises, in Manhattan.  Jeannette claimed he "ill treated" her.  He asserted she deserted him, "preferring the gaiety of Manhattan life."

Convinced Jeannette was cheating on him, Disbrow began divorce proceedings and hired two private detectives who followed her every move.  They went so far as to rent an apartment almost directly across from the Harris house on East 54th Street.  The constant surveillance taxed Jeanette's increasingly fragile nervous condition.

The New York Times said "She had been living a very retired life for two years or more, and on account of the unhappy character of her married life experienced a horror verging on frenzy of anything bordering on publicity."   Finally Jeanette attempted suicide by slashing her throat with scissors on June 7.  Her brother-in-law, Theodore Harris, said she "was simply being hounded to death by her husband."

When Jeannette died ten days later, newspapers were brutal in blaming Disbrow.  The New-York Tribune described, for instance, "The pitiful story of Mrs. Jeannette M. Disbrow, the young and estimable woman whose insanity, attempted suicide and death on June 17 resulted from the effect upon her sensitive nature of a suit for an absolute divorce begun by her husband, Benjamin N. Disbrow."

By the time he purchased No. 322 Disbrow had married Josephine L. Wagner, widow of Norman T. Wagner.  Josephine brought her children, Webster and Norma, into the marriage; and she and Benjamin now had one daughter of their own, also named Josephine.

Benjamin's busy business schedule did not seem to discourage Josephine's summer plans.  On October 1, 1904 Brooklyn Life reported that "Mrs. B. N. Disbrow, who has been at the Wayside Inn, Luzerne, New York, was to return to 322 West One Hundred and Eighth street, Manhattan, this Saturday."  On April 22, 1906 the New-York Tribune noted "Mrs. Benjamin Newton Disbrow and her daughter, Miss Norma L. Wagner, sail on Tuesday for Genoa on the Carpathia;" and three months later the newspaper mentioned "Mrs. Benjamin N. Disbrow, of New York, has arrived in Stockbridge."

At the time, little Josephine had a one-year old pet bulldog, Bully Boy II.  The pet caused quite a stir several years later then a maid took it on an afternoon walk.  On July 8, 1914 The New York Times reported that Mrs. Marie Kennedy was walking along Broadway when she saw the woman and the white French bulldog.  "Mrs. Kennedy gave a cry and pounced on the dog, telling the maid she had no right with it.

"Mrs. Kennedy got hold of the dog's front legs and endeavored to get immediate possession, a move which the maid frustrated by pulling equally as hard in the opposite direction by the hind legs.  The dog did not part in the middle, but it got a severe scratch on its breast from a pair of feminine finger nails."

A beat cop, Patrolman Tracy, came to the dog's rescue and took it to the West 100th Street Station.  Lieutenant McCormack figured that if the women separately called to the animal, he would respond to the real owner.  But that plan failed when both women explained that they were not the actual owners, but were taking care of it.  Jacob Sheer arrived from the Disbrow house and saved the day by convincing the lieutenant that it indeed lived at No. 322 West 108th Street.

By the time of the doggie dispute both daughters were old enough that their names began appearing in society pages.  On April 4, 1915 the New-York Tribune reported on the recent arrivals at the Pinehurst, North Carolina hotels, including "Mr. and Mrs. Benjamin N. Disbrow, Miss Norma L. Wagner [and] Miss Josephine L. Disbrow."  Three months later the family checked into the fashionable Greenbrier Hotel in White Sulphur Springs, West Virginia.

It would be among the last trips Benjamin would make.  He died on November 18, 1916.

In May 1920 Josephine sold No. 322 to the Sigma Alpha Mu Fraternity.   The house was apparently used as temporary housing for alumni, like Raphael Philip Russakow, who was here in 1921, and Nathan Berman who listed his address here the following year.  Berman had earned his Ph.D. from Yale in 1914.

By the beginning of the 1930's the house was owned by general contractor Kielman A. Schuddekoff who also ran his business, the Whitefield Management Corp., here.  Schuddekoff became the target of an investigation in 1936 when subcontracted workers complained he was demanding kick-backs.

One was painter William Castaldi who was hired to work on an apartment building at No. 385 Central Park West that August.  His boss, Paul Lehman, said he would be paid the union wage of $9 a day for a five-day week, but each of the painters would have to give Schuddekoff $10 a week to keep their jobs.

Castaldi gave Schuddekoff five $10 bills, one for each of the painters on the job.  A detective later stopped the contractor and checked his pockets--the marked bills had been supplied by the police.  On November 5, 1936 the 34-year old Schuddekoff was found guilty.  At his sentencing on November 23 he chose to pay a $500 fine rather than serve six months in the workhouse.

Although the Depression Era fine was steep--amounting to nearly $9,000 today--Schuddekoff was lucky that he got the choice.  Three Special Sessions judges had argued about allowing him to opt out of a prison sentence.   Two were adamant that he go to jail; but sentencing required a unanimous vote.

Schuddekoff retained ownership of No. 322 until November 1945, when he transferred title to the nearly formed 322 Holding Corp.  The firm leased rooms in the former mansion, and apparently did not pay a great deal of attention to maintaining it.

On November 1, 1954 The New York Times ran a headline "Water Leak Routs 18 Dwellers" and reported "Eighteen persons were evacuated yesterday from their apartments in a five-story building at 322 West 108th Street, off Broadway, after a leak in a water pipe between the fourth and third stories."

Change came in 1965 when the house was converted to the St. Seraphim Russian Orthodox Church.  The first floor was used as worship space, and the upper floors to "living and sleeping quarters by clergy, students, and persons connected with the church," as described by the Department of Buildings Certificate of Occupancy.

Among the church's members was Alexander Kerensky, the attorney and revolutionary who played a key role in the Russian Revolution of 1917.  He had served as the new Russian Provisional Government's Minister of Justice, then as Minister of War and finally Minister-Chairman.  He fled Russia after the Bosheviks overthrew his government.   The rector of St. Seraphim, Rev. Alexander Kiselev, conducted Kerensky's funeral at Frank E. Campbell's on Madison Avenue on June 14, 1970.

St. Seraphim Church was the scene of another notable funeral on July 25, 1984.  Vera Nemtchinova had been a star of ballet and one of the city's best known ballet teachers.  In reporting on her death The Times noted "Miss Nemtchinova's most famous role was that of the androgynous 'Girl in Blue' in 'Les Biches,' Bronislava Nijinska's 1924 ballet about the sexual and social mores of the chic set in France.  It was in such experimental ballets--including the 1930 'Aubade,' which the young George Balanchine created for Miss Nemtchinova's own company--that the Russian-born dander became known as a new type of ballerina in a modern mold."

The church remained in the building until around 1996 when the Nour Foundation made the former worship space its home.  Still here today, the Nour Foundation presents musical performances.  New York Magazine announced on May 20, 1996 that the Ensemble for the Selcento would be performing works by Strozzi, Falconieri, and Frescobaldi as part of the New York Early Music Series here, for instance; and on May 21, 1999 The Times reported on the late 16th and early 17th century lute songs that would be played here. 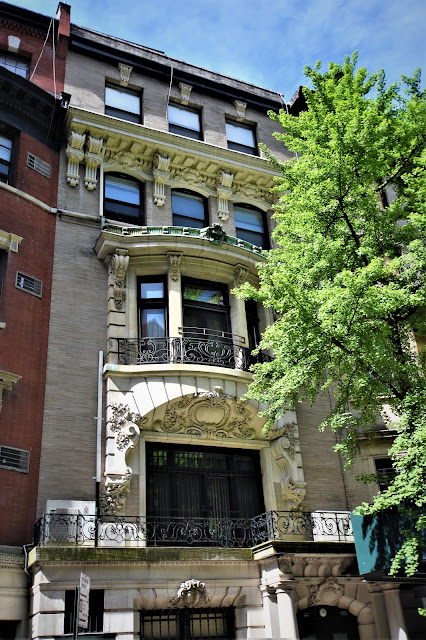 While the Disbrow house shows the regrettable scars of decades of multiple uses, Janes & Leo's striking design shines through as vibrantly today as it did nearly 120 years ago when it emerged as the show-off next to its three more conservative sisters.