Around 1825 a two-story brick carriage house was constructed on Crosby Street, to the rear of the impressive Federal-style home Jacobus "James" Roosevelt" at No. 56 Bleecker Street (renumbered 64 in 1859).   Roosevelt operated a highly successful hardware importing business.  His first two wives, Mary Eliza Walton and Catherine Elizabeth Barclay, had died.  He married Harriet Howland on January 29, 1821.  This great-grandson would be Franklin Delano Roosevelt.

Roosevelt died on February 6, 1847.  His will left "to his wife, his dwelling house, coach house, and grounds in the city of New York, and his house, farm &c., in the town of Poughkeepsie...during her life, and also an annuity or yearly sum of $5000."  Harriet's annual allowance would amount to about $155,000 today.

Harriet remained in the Bleecker Street house until her dean on April 18, 1856.  It was converted the following year for the New York Infirmary for Women and Children, headed by Dr. Elizabeth Blackwell, the first female physician in the United States.

The days of elegant homes and quiet residential streets around the Roosevelt home were quickly drawing to a close.  Sometime after the end of the Civil War the carriage house become the shop of E. and C. L. Day, carriage builders.

On May 18, 1886 the firm placed an advertisement in The Sun for “3 good painters on carriage parts.”  Not just anyone could qualify as a carriage painter.  The position required years of training to meticulously decorate the vehicles with striping and detailing.

By 1898 E. and C. L. Day had spread into the five-story building next door at No. 163 as well, sharing space with the New York and Boston Dispatch Express Co.

E. and C. L. Day not only built carriages, but sold carriage fixtures and by 1902 had branched out into “horses” as well.

On August 24, 1902 The New York Times reported that Lucy M. Rice had sold the combined buildings for about $30,000.  The article noted “The purchaser, who is a builder, will occupy the premises.”  That purchaser appears to have changed his mind; but did enlarge the carriage house and connect it to the Bleecker Street house (now a restaurant with small shops on the upper floors) with a one-story structure.

E. and C. L. Day left Crosby Street that year and the National Express Company moved in.  The buildings continued to be used by freight companies.   White’s Express Co. was here as early as 1902 and its advertisement in the Brooklyn Daily Eagle Almanac that year made clear that the Crosby Street operation was its “express department.”  The “contract wagon department”—the equivalent of a rent-a-truck firm today—was in Brooklyn.

The National Express Company was here at least through 1908, and in 1909 The Sun Monahan Express Company was listed in the building.  It was possibly the advent of motorized trucks that made Nos. 163-165 no longer practical as an express depot.  By 1914 De Luca, De Fina & Co. had taken over the building.  According to The Waste Trade Journal the firm was “dealers and packers in paper mill supplies of every description.”

As the Great Depression cast its long shadow over New York, the little combined buildings hiding on Crosby Street had become what The New York Times described as a “rag factory.”   They were nearly lost to fire on April 5, 1931.

The combustible materials in the rag factory ignited into a three-alarm blaze around 7:30 that evening.    Because of the narrowness of the former carriage alley, firemen fought the fire from the roofs of surrounding buildings.  They were further hampered by the thick smoke created by the burning rags.

The Times said that “tons of water” was poured onto the buildings and onto nearby structures as well.  The newspaper said that the narrowness of Crosby Street “offered the flames a chance to leap across to the ten-story warehouse and office building just opposite.  This structure and adjoining buildings were kept under a constant water barrage until the danger was past.”

In the meantime, traffic was in chaos.  The newspaper said “motor cars choked Lafayette Street from Cooper Square to Canal Street.” 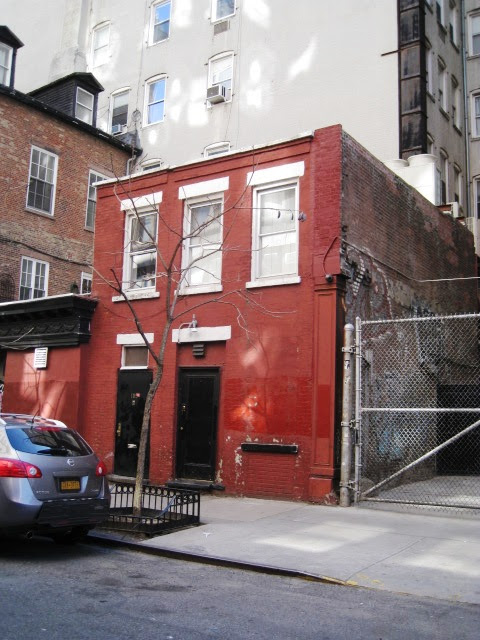 Around 1961 the five-story building at No. 163 Crosby was demolished to be used as a parking lot.  But No 165 survived; an unrecognizable relic of the early days of what would be called Noho, when wealthy homeowners built private stables for their horses and vehicles.