By the mid 1870's the East 64th Street block between Third and Lexington Avenues was lined with nearly identical brownstone-fronted rowhouses.  No. 159, like its neighbors, sat above a rusticated English basement.   Its windows wore neo-Grec architrave surrounds with incised decorations.  Classic triangular pediments sat above the parlor openings, echoed in the overhanging hood above the entrance.  The windows of the upper floors were topped with molded cornices, and a substantial bracketed cornice completed the design.

A graduate of Columbia University, Herschfield was an attorney and a Commissioner of Deeds.  The couple had a daughter, Blanche, and lived quiet lives on East 64th Street, their names rarely appearing in print other than for charitable acts or similar reasons.  Henrietta, for instance, was listed as a "contributor of clothing" to the United Hebrew Charities in 1906.

Mitchell Herschfield died on September 30, 1910 at the age of 58.   Although Henrietta soon moved out, she retained possession of No. 159.   She was living at No. 418 Central Park West in August 1914 when she announced Blanche's engagement to Daniel M. Ellenbogen.

In June 1916 she leased No. 159 furnished to well-to-do broker Eugene Jackson Koop and his wife, the former Marietta Barkley Ludington.   The family's comfortable existence was evidenced in a help wanted advertisement on October 11, 1920:

The listed wages were probably monthly, equal to about $200 per week today.

On Tuesday June 27, 1922 an auction was held in the house.  The announcement listed "furniture, china, bric-a-brac, paintings, oriental rugs and carpets."  Clearing out the residence was necessary because three weeks earlier Henrietta Herschfield had sold No. 159 to Samuel and Amanda Liebmann Hoff.

At the time of the sale homeowners along the 64th Street block were furiously renovated their architecturally outdated homes.  A few months earlier, on December 11, 1921 New York Times journalist Helen Bullitt Lowry noted "On Sixty-fourth Street and Sixty-third Street, between Lexington Avenue and Third Avenue, fairy-book streets suddenly open to view just around the corner from weary miles of brownstone.  Here is the warm blush of pink stucco and gay red tiles.  Here are stern wrought-iron gates and romantically barred grilled windows."


Before moving into their new home, the Hoffs joined the trend.  They hired the esteemed architect William Lawrence Bottomley to transform their old brownstone to a Mediterranean fantasy in keeping with its neighbors.  The plans, filed on June 28, 1922, estimated the cost of the alterations at $20,000--more than a quarter of a million dollars today.

When the renovations were completed in 1923 little trace of the 1870's Victorian was left.  The stoop had been removed and the entrance moved to the street level.  A cheerful slathering of pale yellow stucco covered the facade.  A full-width cast iron balcony graced the second floor, accessed by fanlight-capped French doors within an arched opening.  A graceful cartouche perched upon its keystone.  Where the robust metal cornice had been, blind roundels provided understated decoration.

An attorney, Samuel Hoff had practiced law in New York since about 1889.  He was also a director of the Lincoln Safe Deposit Company and the Lincoln Warehouse Corporation.  He and Amanda had six children, by now all grown.

A few years after moving in, Samuel Hoff became ill.  He did not improve and died in the 64th Street house on November 21, 1929.

Two years later Amanda slightly renovated the house in order to rent furnished suites.  The changes, which included a two-story extension to the rear, may have had to do with her upcoming marriage to Dr. Leopold O. Stieglitz on July 27, 1932.

Amanda made more significant alterations in 1936 when she hired architect G. Kurth to convert the house to one apartment each on in the first and second floor, two one the third, and one on fourth.  Among her first tenants were Robert Hitchcock and Mary Topping Rubin.  The couple was married on March 4, 1936.  They would be here at least through 1940.

The new owners altered the first and second floors in 1953 to "offices and studios."  The high-end architectural antiques store of Edwin Jackson, Inc. was here for several years.  Specializing in period mantels and fireplaces, it counted among its customers the White House and some of Manhattan's most prestigious decorators.

Among the tenants upstairs were Arthur William Brown and his wife, Grace Green Brown.   The couple had met as students at the Arts Students League.

Arthur was a nationally-known magazine illustrator.  He got his start illustrating magazine fiction by authors like Booth Tarkington, F. Scott Fitzgerald, Ring Lardner, and Arthur Train.  Grace was a designer of women's handbags and apparel.   She had started out as a designer of stained glass windows for Louis Comfort Tiffany.

In 1964 William Brown was elected to the Society of Illustrators' Hall of  Fame.  Grace died in their apartment on May 6, 1965 and William died the following year, on October 24.

By the mid 1970's R*E*A*L International had taken over the retail space.  The firm operated  residential resort properties in Marbella, Spain.  It was followed by caterer Donald Bruce White who ran his business at ground level and lived in the upper floors.

Following White's death, party designer and florist Renny Reynolds took over the building.  He closed his two East Side shops and moved his business in in November 1987 and, like White, occupied the entire upper portion of the house.  Reynolds had hired interior designers Jed Johnson and Alan Wanzenberg to redo both spaces.

Times journalist Elain Louie described the shop in December that year, saying in part "The floor is paved with both natural and glass bricks.  A garden under a skylight joins the house to the wing, with an iron fountain, which Mr. Reynolds bought in Capri, Italy, in the center."

The Renny Reynolds shop remained here through 1995.  In 1996 it became home to Chrome Hearts, owned by apparel designers Richard and Laurie Lynn Stark, described by The Real Deal writer Katherine Clarke as "best known for outfitting rock and roll greats such as the Rolling Stones, the Sex Pistols and the Scissor Sisters in leather jackets and diamond encrusted cuffs."

In 2005 they purchased the building from Renny Reynolds for $7.5 million.  Eight years later, after moving their store to Madison Avenue, the Starks listed the property for $14 million.

The store space became home to The Elder Statesman "Winter Shop" in December 2015.  Operated by Greg Chait, its flagship store was in Los Angeles.  It was a one-season venture, selling items like "10-pound cashmere blankets." 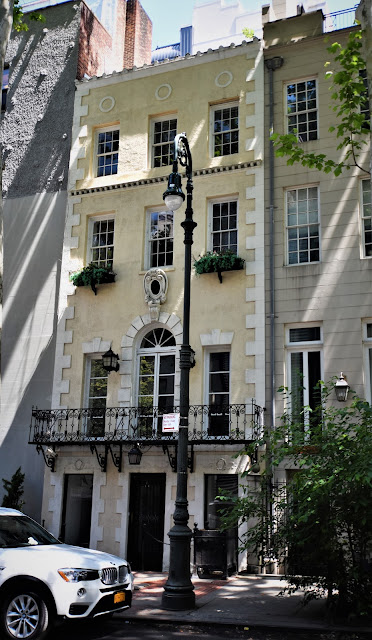 Now once again a private home, the former store space contains a "vast gallery," according to real estate listings, and the dining room.  In the meantime, William Bottomley's fanciful 1922 facade remains intact, an important piece in what Helen Bullitt Lowry deemed a "fairy-tale street."