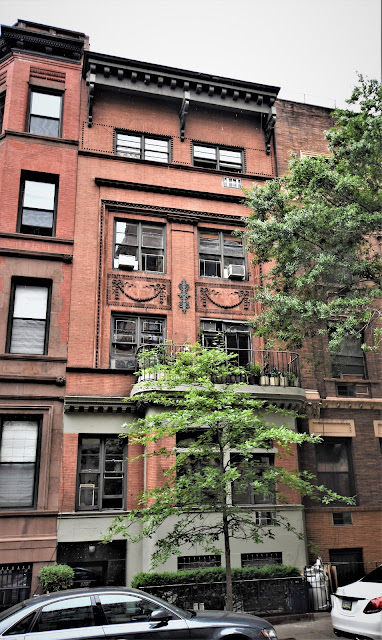 The family was at Niagara Falls on September 2, 1881 when Miller unexpectedly died.   Before long Elizabeth moved her family to New York City.  The move may have been prompted by her hopes to find the best husbands for her growing daughters.

The family lived temporarily in The Lincoln, on Broadway at 52nd Street.  In the spring of 1891 Elizabeth laid plans for a private home.  And she went to the top of the heap in choosing her architect.  On May 16, 1891 the Real Estate Record & Builders' Guide reported that C. P. H. Gilbert had filed plans for a four-story brick and stone house at No. 309 West 76th Street.  The construction costs were projected to be $26,250--or $730,000 today.

Simultaneously Gilbert designed the house next door at No. 307 for William G. and Emily McGuckin.  Somewhat surprisingly, the finished products, completed in 1892, had little in common architecturally.


Faced in Roman brick the 22-foot wide house featured a projecting bay at the parlor level that provided a stone-balustraded balcony to the second floor.  The second and third floor openings were surrounded by a terra cotta frame and were separated by a single brick pilaster.  Delicate terra cotta ribbons, bellflowers and swags decorated the sprandrel panels between floors, contrasting with the manly cast iron masonry support between them.  Above the understated fourth floor a deeply-overhanging cast metal cornice sat upon extraordinary wrought iron consoles.


A year after the family moved in the house was the scene of Florence's marriage to James Wilton Brooks.  On November 30, 1893 the New-York Tribune, which deemed the ceremony "a pretty affair," noted that "A wedding breakfast, served at small tables, followed the ceremony."  Three days later the newspaper updated readers that "Dr. Brooks has taken his bride South.  Before returning here for the Christmas holidays Dr. and Mrs. Brooks will visit Cuba and the Bahamas."

Like all moneyed New York families, the Millers closed their home in the summer and spent the season at fashionable resorts.  The Social Register, Summer, placed them in The Mathewson in Narragansett Pier in Rhode Island in 1894.

No. 309 was the scene of another wedding on April 29, 1896 when the younger Elizabeth married Dr. Curtis Drayton Carter.  The Sun noted "The bride wore the same gown of white embossed velvet with bertha trimmings, and veil of old point lace, which were worn by her mother on her wedding day."  The New York Times added "An orchestra furnished music at the ceremony and reception."

At the turn of the century Elizabeth S. Miller suffered enormous heartbreak.  May Leticia had married Charles E. M. Gross and was living at No. 312 West 103th Street.  She died there on April 12, 1901.  Florence had been ill for some time, and eleven months later she died on March 21, 1902.

Rather surprisingly, Leonore married May's widowed husband less than three months later, on June 4.   The New-York Tribune reported that the wedding took place "at the house of her sister, Mrs. Curtis Braxton Carter, in West Seventy-first-st., the home of Mrs. Henry James Miller, the mother of the bride, being already closed for the season."

In fact, Elizabeth was preparing to sell the home, and did so on July 12.  The new owner, Virginia A. Bell, bought it for investment only, and sold it three weeks later to attorney Henry Neville, Tifft.

Tifft and his wife, the former Gertrude Havens, had two children, Henry, Jr. and Gertrude.  Born in 1854 Tifft already had had an impressive career when he bought the house.  A graduate of Columbia Law School in 1876, he was appointed Assistant United States District Attorney in 1883.  He held the office through 1886.  In 1897 he was appointed Inspector of Public Schools. 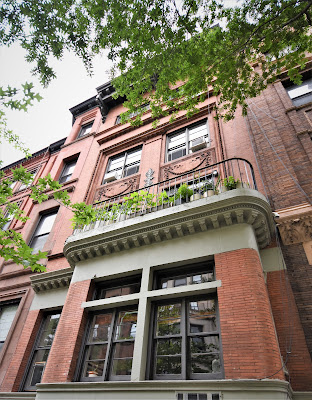 By now he had a private legal practice, was a member of a score of clubs, and was highly involved in charitable organizations.  He was secretary of the New York Juvenile Asylum, a director in the West Side Branch of the Young Men's Christian Association, and trustee of the Sevilla Home for Children, for instance.

Also living in the house was Gertrude's widowed mother, Susan M. Havens.  Both women were active in the Upper West Side; members, for instance, of the Women's League for the Protection of Riverside Park.  The family maintained a summer home, "La Baleine" in Quogue, Long Island.

Tifft was a life-long member of the Madison Square Presbyterian Church and it was there that Gertrude was married to Philip Le Boutillier on May 19, 1909.  The reception was held in the 76th Street house.

At World War I broke out, Henry Jr. enrolled in the U.S. Army.  By the time peace was declared he had achieved the rank of sergeant.  He remained in the Ordnance Section of the Officers' Reserve Corps and by 1920 was a 2nd lieutenant.

Henry Tifft died of a heart attack in No. 309 on March 11, 1925, at the age of 71.  Along with the wealthy and politically powerful who attended his funeral two days later were 25 boys from the Children's Village in Dobb's Ferry.

Gertrude soon sold the house to Pauline Maier.  When Maier sold it to The Tague Holding Corporation in March 1929, it signaled the end of the line for No. 309 as a private home.  It was operated as furnished rooms and the names of its occupants would no longer appear in society pages.

One roomer was a night club dancer who went by the names Ivy Lada and Harriet Reyes.  The 32-year old woman suffered a brutal rape by John Gallagher on May 1, 1930.  During the horrific incident she suffered a fractured rib and skull.

In court, her attacker's attorney turned the blame on Ivy.  He said his client went to a dance hall "in an intoxicated condition" and told the jury "this dance hall was the type of hall that employs hostesses."  The implication was clear.

"He asks one of the hostesses to go out with him on a party, and promises her twenty dollars to go out with him for the evening."  He took Ivy back to his 64th Street apartment house, but when he made advances, "the girl repulse[d] him and turn[ed] her head away."  Her rejection threw him into a rage and he viciously beat and raped her.

Despite Ivy's being depicted as a loose woman, Gallagher was convicted of second degree assault.

Many of the roomers in the house suffered the miseries of The Great Depression.  Albert Johnston was a stationary engineer who lost his job in February 1932.  With a wife and two children to provide for, he was desperate to find another job.  He went to the Efficiency Employment Bureau on Sixth Avenue in August for help.  Sidney Hirsch, a 27-year old clerk, had a job available for him; but there was $25 fee payable in advance.  That was more money than Johnston had, and he borrowed it from his landlady.

What he and 49 other out-of-work men and women could not have known is that there was no fee and the jobs they had been promised were fictitious.  Hirsch had been working there only about a month, and the $25 from each applicant was going into his pocket.  When Johnston reported to work on August 14, he found out there was not job.

On August 16 The New York Times reported "A group of fifth indignant unemployed men and women stormed the office of the Efficiency Employment Bureau...yesterday morning."  Like Johnston, they were mostly heads of families and had been out of work for months.  "For a while [they] threatened to wreck the office unless their money was refunded or the promises of a job made good," said the article.

Thankfully, the firm was bonded and each of the applicants got his $25 back.  Unfortunately, there were still no jobs.

Louis Foursanc ran the "lodging house" in 1940.  He had 15 roomers that year.  The once-gracious home continued to be operated as rented rooms until 1976 when it was converted to apartments.  The renovations included removing the stoop and moving the entrance to the basement level.   The architects made no attempt to preserve the integrity of the design at this level, and framed the entrance with black polished stone.

The interiors were even more brutalized than the facade, which remains relatively intact above the basement.  The 1892 Gilbert interiors were ripped out, leaving pitiably uninteresting living spaces.

uncredited photographs by the author