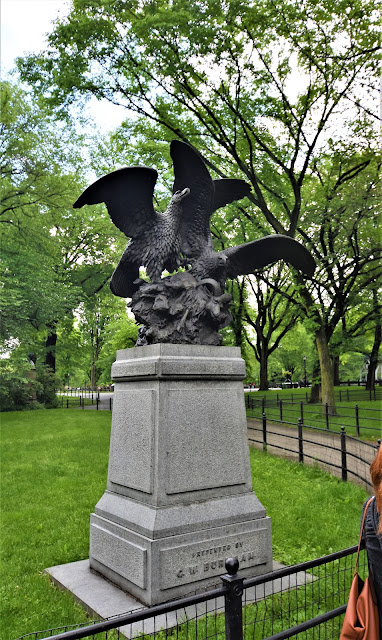 Born in Metz, France on New Year's Day 1801, Christophe (or sometimes Christopher) Fratin was an accomplished sculptor by 1831, when he first exhibited at the Paris Salon.  His preferred subjects were not the classical or religious figures expected by art buyers; but animals--a fondness most likely developed as a child in his father's taxidermy shop.

In 1854 Galignani's New Paris Guide described the renovations of Paris's Garden of the Luxembourg.  The article said in part "All the old statues, which  had been mutilated during the first revolution, have been removed, and new ones by the best Parisian masters placed in their stead."  Among them was "a fine bronze group of two eagles feasting on a ram, by Fratin."

That casting was obviously one of two Fratin had made.  One year earlier William Carey Richards published the small guidebook The New York Crystal Palace and How to Make the Most of It.  In describing the items exhibited within the French Government Court, he noted "a magnificent pair of eagles and goat, in bronze, designed by Fratin."

It seems that the sculptor did not initially name the piece; for both guidebooks relied on a description without a title.  It was a situation that would result in a raft of different titles over the next few decades.

Fratin's grouping was no doubt disturbing to many Victorian viewers.  Two powerful eagles attack a small, bleating mountain goat.  The frenzy of the kill and the might of the birds is vividly depicted in bronze that seems ready to come to life.

In 1858, the same year that the Crystal Palace burned, construction began on Central Park.  Where Fratin's sculpture was for the next five years is unclear; but in 1863 it was acquired by manufacturing magnate Gordon Webster Burnham as a gift to the City for the new park.  The Minutes of Proceedings of the Board of Commissioners on December 31, 1864 listed the "gifts, devises, or bequests for the purpose of embellishing or ornamenting the Park" and included "One group of Bronze Eagles, presented by G. W. Burnham, Esq., May 18, 1864."

The sculpture on its granite base was placed near the north end of The Mall, seemingly somewhat obscured by foliage in early photographs.  The troubling subject caused concern to some critics, as evidenced in Clarence Cook's 1869 A Description of the New York Central Park.

"Even such small matters as the bust of Schiller and the Bronze Eagles...must have placed the Commissioners in something of a dilemma.  On the one hand, they could not, without offence, decline the gifts--it seems to be a settled principle to accept the smallest favors, from the skeleton of a negro to a copper medal advertising a soda-fountain manufacturer--and on the other, they could not but feel that the gifts themselves were not particularly desirable possessions."

Cook seems to be among the first to put a title on the grouping.  "In time it will also be easy to remove the spirited bronze of the 'Eagles Devouring their Prey' to a more suitable place in the Zoological Garden."

Schribner's Monthly agreed that the sculpture was inappropriate for the tranquil park.  In its May 1873 issue took a swipe at Fratin's work and coined a new title for the piece when it wrote "the 'Eagles bringing food to their Young,' will find a good place somewhere about the new Natural History Museum, if the live animals do not object to the indifferent drawing of the bronze ones."

The Evening World offered yet another name to the sculpture on May 28, 1890 in its detailed description of the park's artwork.  "A little to the south is 'The Eagles and the Goat.'  Two strong black eagles are quarreling over the possession of the carcass of a young goat."

When King's Handbook of New York City described the group as "an interesting bronze" in 1892 and used the title The Eagles and Goat, it seemed, perhaps, that the name was now agreed upon.   But The Sun's Guide to New York that same year tweaked it just a bit, calling the statue "The Eagles and the Mountain Goat."

By now, at least, the sculpture was no longer being panned by critics.  In his 1893 The Memorial History of the City of New-York, James Grant Wilson wrote "Just west of the Mall, and on the Center Drive, is the bronze group of the 'Eagles and Goat,' which was executed by Fratin, and represents two of those noble birds tearing to pieces a goat which one of them has secured and borne to their eyrie [sic]."  He added that it "is a fine piece of casting."

The first use of the "Eagles and Prey" may have been by Ruth Green Harris in her article in The New York Times on January 17, 1937 entitled "The Sculptural Melange That Is Central Park."  The woman who would write The Techniques of Sculpture five years later can hardly be excused for getting the artist's name horribly wrong.  "'Eagles and Prey' by Fratin S. Christian (the prey has a curly horn) gathers to itself a mass of deep-cut conflicting shadow at the north end of the Mall." 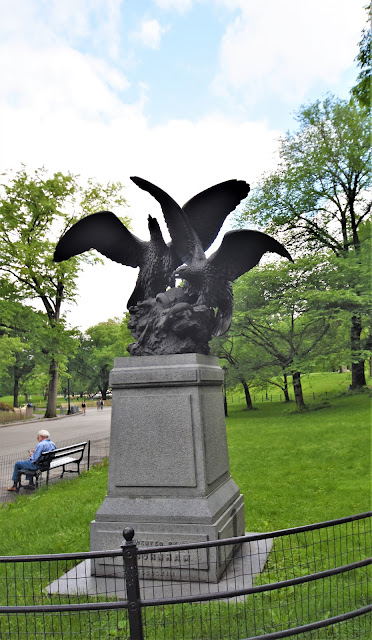 Eagles and Prey stuck and is the official name of the sculpture today.  The piece was cleaned and restored by the Central Park Conservancy in 1992.  No longer half-hidden to protect delicate Victorian sensibilities, it is a powerful presence in the park today.