Peter Doelger was 18-years old and nearly penniless when he arrived in America from his native Germany in 1850.  Before the end of the century he ran one of the most largest breweries in the country and was counted among New York's wealthiest citizens.

Doelger invested in real estate, as well.  Following his death his son, Peter, Jr. headed the family business.  When Prohibition shut down the brewery, it was real estate that kept the firm going.  On Wednesday, May 7, 1930 The New York Times reported "The Peter Doelger Brewing Company, Inc. leased to the 1,491 Third Avenue Realty Corporation, Julus Raynes, president, the northeast corner of Third Avenue and Eighty-fourth Street."  The 24-year lease began at $8,000 a year and increased to $18,000 for the last three years.

The newly-formed syndicate hired George Dress to design a four-story replacement building on the site.  Completed within the year, the structure was an Art Deco take on neo-Classicism.   Above the ground floor storefronts, two-story fluted pilasters separated each bay.  Green and cream colored panels include lyres against a latticework background.  The fourth floor, above a prominent cornice, was faced in beige brick.  Here recessed panels held splendid terra cotta panels that echoed Art Deco jewelry.

The second floor held offices, the third floor a "hall for public assembly," and the fourth contained more offices and meeting rooms.  For a while the assembly rooms were dubbed the Mayo Ballrooms (plural because partitions could separate the space for smaller groups).  The name, taken from County Mayo in Ireland. was a nod to the Irish locals who shared Yorkville with the more visible German and Hungarian population.

The Mayo Ballroom was the scene of wedding receptions, union meetings and political events.  On March 26, 1932 the Irish American Advocate announced that an "entertainment and dance" sponsored by the Roscommon and Mayo Boys and Girls would be held in the Mayo Ballroom.  For their 50 cent admission the patrons would enjoy "special entertainment by Mary Canning and the Koch Kiddies" and "Irish and American dancing."

The following year, on November 3, 1933, Ferdinand Pecora, candidate for District Attorney, held a campaign rally here.  But, as was common during the volatile economic and political environment of the 1930's, not all events in the assembly room went smoothly.  During a meeting of the 16th Assembly District Fusion Party a month later tensions turned to fisticuffs, landing two of the party workers in court.

The venue's popularity was evidenced in an advertisement in The Advocate on March 23, 1935.  It listed the "Big Galway and Tyrone Benefit Dance" for that Saturday, the "Second Annual Ball of the Irish Coleens," the following night, and an "entertainment and dance" given by the Holy Name Aces the next Thursday evening.


By now the space had taken on a second name--Deutche Halle--one which would soon supplant the first.   The name change possibly reflected the nationalistic fervor sparked in German-born Yorkville residents by the political developments in their homeland.

On December 20, 1934 a political meeting of about 1,000 persons at Turn Hall detonated into a full-blown riot between two opposing Nazi factions of the Ordnungsdienst, described by the Jewish Telegraphic Agency as the "American counterparts of Hitler's storm troops."  The article said "Chairs were brandished about Nazi heads as weapons.  Punches were tossed indiscriminately.  Chairs and bottles were hurled from the balcony.  Women shrieked and tried to withdraw.  At least one fell to the floor and was stepped on by a uniformed storm trooper."

Following the 20-minute melee, the "Haegele faction" moved to Deutsche Halle.  "Here too the meeting was in strict privacy.  One reporter who tried to enter was assaulted.  From the hall trickled sounds of boisterous merriment.  The Haegele putsch was celebrating its baptism in battle and its victory."

In 1940 an upstairs meeting room was leased as the Lexington Post No. 108 of the American Legion.  A backlash against the Nazis was apparent when its members participated in a rally held by the We Americans of Yorkville at the Yorkville Casino nearby on 86th Street.  The Yorkville Casino had been a frequent meeting place of the German-American Bund.

The New York Times reported on September 14 "The rally, at which twenty speakers denounced persecution of minorities and called for Americanism as 'the only 'ism in Yorkville,' was preceded by three parades."

On the night of June 24, 1946 Police Sergeant Thomas F. Fitzgerald and Detective Cornelius Connolly responded to a report of a burglary in progress at Deutche Halle.  Creeping in, they surprised a man in the darkness.  As Fitzgerald looked over his identification, the crook pulled out a pistol and shot him twice in the abdomen.  Connolly chased him, exchanging gunfire until the suspect escaped.

The New York Times reported "A few minutes after the shooting a passer-by reported that an armed person had jumped into a car at Eighty-fifth Street and First Avenue.  When the driver failed to obey his command to 'move over' he pressed the trigger but the pistol failed to fire."

The assailant's ID provided a positive identification and The Times said that he "was well known in the neighborhood."  While Sergeant Fitzgerald would survive his wounds, he was still recovering a year later when 27-year old Thomas Alphonse Nicols, "a husky six-footer," according to the newspaper, was finally arrested.  By then he was also wanted for shooting another detective and was the prime suspect in the fatal shooting of motorcycle cop Harry Schiffries.

In its February 17, 1947 issue, Life magazine published an article entitled "Peoples of New York."  It highlighted the 75 nationalities that made up the city's rich culture.  The article used Deutsche Hall to exemplify the German community.  The paragraph smacked of the still-fresh anti-German sentiment:

Every week in New York City entire German families meet...at Deutsche Halle on 84th Street.  Dressed in their regional costumes and speaking German, they engage in violent Bavarian folk dances and drink huge quantities of beer.  The children, brought along to learn dances and to brush up on the language, enjoy the meetings for a time, then fall asleep while waiting for their parents to go home.  Germans in the city's Yorkville district are fond of uniforms and costumes, and a pro-Nazi Bund flourished before the war.

In stark contrast to the Nazi groups that had met here in the 1930's, the office of the Jewish Vacation Association was in the building in the early 1950's.  The group published a play, Blessing the Trail, in February 1953.  The script was intended as "a helpful starter for parents or youth groups interested in discussion" of choosing the right summer camp.  The Jewish Vacation Association felt it was a complicated subject, including "financial matters, consideration of different types of camping programs and their values for the individual youngster."

Somewhat surprisingly, the assembly room was still known as Deutsche Halle nearly a decade after the end of World War II.  In October 1953 the guards employed by the Metropolitan Museum of Art and The Cloisters went on strike.  The 170 watchmen were members of the Museum Guardians Union of America and demanded an pay increase of $9.50 a week.

Two weeks into the strike the Met announced that it would simply replace the men if they did not immediately return to work.  Faced with losing their jobs and their pensions, the guards "agreed to return to work at a meeting held in Deutscher [sic] Halle," according to The New York Times on October 23.

The following year alterations did away with Deutsche Halle.  The third floor was converted to offices and light manufacturing.

Around 1975 Alternatives moved into the ground floor.  The trendy housewares store offered decorative items like the $9 plastic cube available in December that year.  The store noted the 10-inch cube with rounded edges was made of ABS plastic--"the material is used for football helmets."

In 2012 Janovic Plaza took over the 4,200 square foot ground floor space.  By then the majority of the upper floors were occupied by the Joan H. Tisch Center for Women's Health. 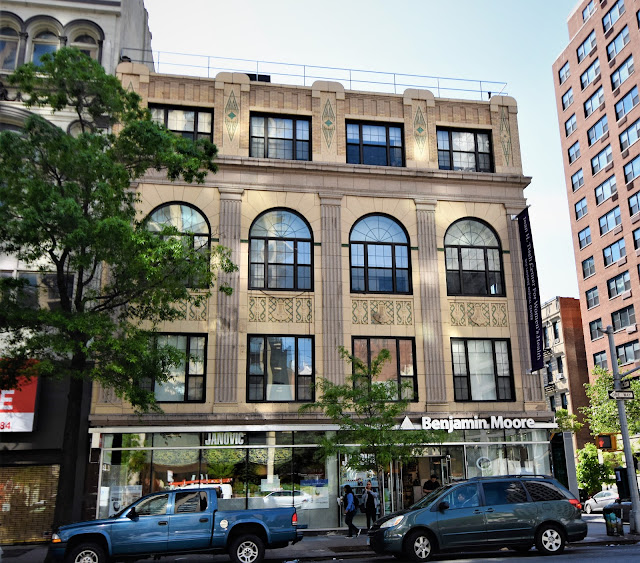