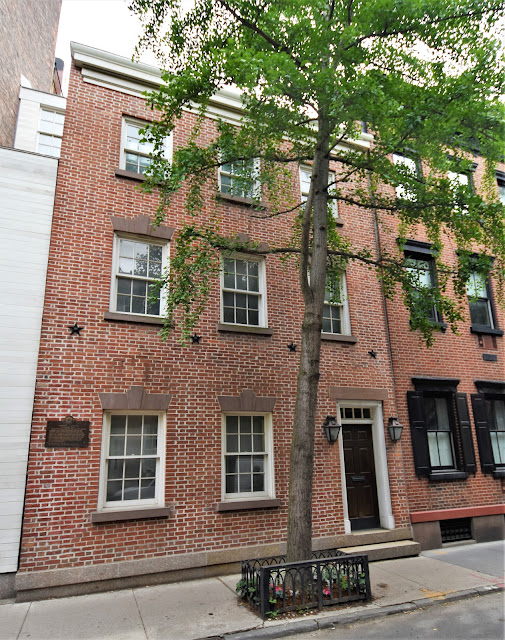 At some point before 1799 Bedford Street appeared on the maps.  At the time the extended Roome family was well-known in New York City, to the south.  On December 1, 1798 John Roome was appointed by Mayor David Mathews "to examine the Stoves put up in this City, and the Places allotted by the Inhabitants to keep their Ashes in."

The new inspector may have been the same John P. Roome who built the house at what would be numbered 70 Bedford Street in 1806.  That is difficult to ascertain; for while the Roomes appeared in city directories for decades, they were not inventive in naming their children.  There were no fewer than three John P. Roomes at one point in the early 19th century.

But it is likely that inspector of stoves who erected No. 70, for he was listed among the volunteers with Fire Company 14 in 1808 through 1824.  His wooden Federal-style home was faced in Flemish bond brick.  Handsome touches like the splayed brownstone lintels with projecting keystones placed it a step above the average house.  Its original peaked roof would have featured one or two dormers.  A narrow carriage drive next to the house gave access to the rear year.

Four years after the family moved in, daughter Margaret had a country wedding.  On September 15, 1810 The Lady's Miscellany reported that on Saturday evening, September 2 "Mr. Charles Oakley, merchant," was married "to Miss Margaret Roome, eldest daughter of Mr. John P. Roome, all of this city."  The wedding took place in Tappan, in today's Rockland County.

In the following decade Margaret's husband plunged headlong into real estate development in the neighborhood, erecting frame and brick homes.  Charles Oakley was among the most prolific of Greenwich Village real estate developers in the first decades of the 19th century.

By then Margaret's father had been appointed a "Crier of the Courts of Oyser and Terminer and Gaol Delivery and of the General Session of Peace"--in other words, a constable or policeman.  In the fall of 1820 The New-York City-Hall Reporter recounted his nabbing of counterfeiters.

On the 31st of August last, Jacob Hays, John P. Roome, and other police officers, in consequence of information previously derive from one Dillingham, a carpenter, who worked at No. 10, Pump-street, went there, and hearing some person in a shop opening into a back yard, knocked at the door, which not being opened, they knocked again, and then burst it open.  The found [Guy] Johnson and [William] Price...alone.  The latter had ink on his hands, and one or both h ad their sleeves rolled up, as if recently engaged at work.

Evidence collected included copper plates for engraving $2 bills.  The Reporter said the plates "were done in a masterly manner" and a fake bill printed from one "was also an ingenious imitation."  The crooks were sent to prison for life.

Roome was a member of the Masonic Independent Royal Arch, No. 2 in 1821, along with Nicholas Roome, who may have been his son.  The family worshiped in the nearby Church of St. Luke in the Fields.  Its membership roll in 1836 included E. Roome and M. K. Roome, along with John.

It would appear that when he was not fighting crime Roome puttered in his garden.  The Annual Report of the Inspecting Committee for the New-York Horticultural Society for 1829 included the mention "A seedling nectarine of the free stone kind, and of highly excellent sort, was produced by Mr. John P. Roome, of this city, raised by himself."

Alexander Hemphill and his wife, Clara, were here by 1860.  The house was scene of his brother's funeral on December 17 that year.  Theodore A. Hemphill had succumbed, according to The New York Times, to "a lingering illness."

Alexander Hemphill died two years later.  Clara moved to Brooklyn and No. 70 was purchased by Philip Frietag who had other plans for the property.  He converted the house to a water softener factory in 1868 and in March 1869 hired builder Julius Poerschel to build a three-story brick factory in the rear yard.

When he took John Helmsky into the business it became known as Frietag & Helmsky.  Frietag sold him one-half of the real estate and they expanded the rear factory in July 1871.  The Real Estate Record & Builders' Guide announced "Frietag & Helmsky, owners," had filed plans for "one story to be added" to the structure.

It appears the partnership broke up in 1876.  On September 1 that year John Helmsky sold his one-half interest in No. 70 to Frietag for $8,000.  Frietag continued on until the spring of 1892 when he sold the property to Jacob Dieter for $18,750--about $521,000 today.  A truck bay had been broken into the first floor wall to enable the loading and unloading of supplies and finished goods; and the carriage drive had been filled in with a factory extension.

Dieter's furniture making shop, Jacob Dieter & Sons Co., was substantial.  In 1893 he employed 35 men who worked 54 hours during the week and 9 hours on Saturdays.  The firm specialized in high-end reproductions, so popular in late Victorian parlors.   When, for instance, the upscale Hotel Savoy opened in 1892, the furnishings for the Empire Parlor and chairs in the Private Dining Room were custom-made at J. Deiter & Son.

In 1899 Jacob Dieter & Sons Co. landed the contract to furnish the new Supreme Court Building on Madison Avenue.  In order to meet the deadline and fill the apparently substantial order, the men were put on a grueling schedule.  But the long hours endured by the craftsman caught the attention of factory inspectors.

On October 27 The New York Times reported inspectors found Dieter & Sons "have worked their men ten hours a day, Sundays, and also underpaid them.  Their men received $10 and $12 a week, it is claimed, when they should have received $18 and $24."  (Even at the highest wage, the skilled craftsmen would have been earning only $732 a week in today's dollars.)

Around the beginning of the Great Depression the house-turned-factory was closed down.  It sat empty for three decades before catching the eye of 25-year old singer-songwriter Noel Paul Stookey.  Stookey was the "Paul" in the renowned folk trio Peter, Paul and Mary.

In 1962 he brought his fiancée, Elizabeth "Betty" Bannard to the decrepit structure.  He later recalled the visit to New York Times reporter Nan Ickeringill.  When he asked her "What do you think of that!" she replied, "I think someone should tear it down."

Bannard was unaware that he had already purchased it.  The $38,000 he paid would equal about ten times that much today.  Stookey said "I'm a great believer that there is a lot of goodness around that most people don't see."

In 1963, while re-conversion of the factory to a house was underway, Stookey and Elizabeth married.  Their architect, Herbert Lippmann, made no attempt to recreate Federal period interiors.  He removed the second story floor to created a 19-foot high living room.  The crumbling rear wall was replaced with a two-story stained glass window.  The truck doors were bricked in and windows inserted.  A garage for Stookey's Jaguar XKE filled the space of the one-time carriage alley.

The work was completed in time for couple to move in before the birth of daughter Elizabeth in 1964.  Ickeringill reported on October 26, 1966 "The den, the most crowded room in the house, is where Mr. Stookey writes songs and scripts, keeps files of his myriad ideas and inventions, displays his gold records (the five-year-old group has made seven albums and sold more than 5-million copies) and holds family conferences."


A subsequent year-long remodeling that began in 2003 more closely copied the original architecture of the house.   The new stone lintels and keystones of the new ground floor windows matched the originals on the second floor.  A period-appropriate doorway was crafted.  At the same time, Noel Paul Stookey's garage became part of the house. 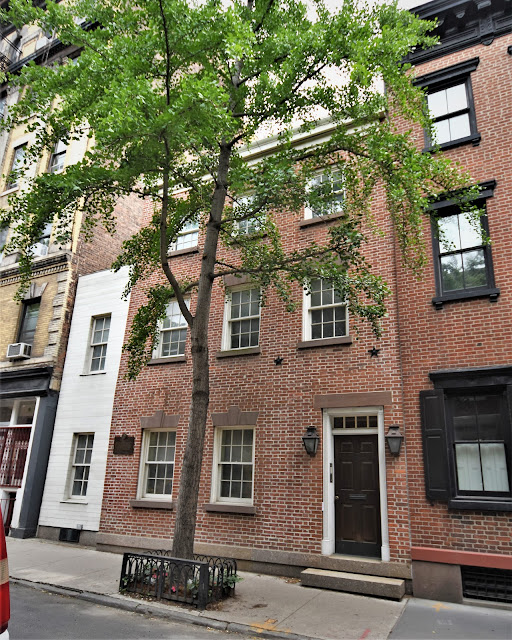 After 210 years and decades of ignominy, the John P. Roome house once again holds a proud place on the block.