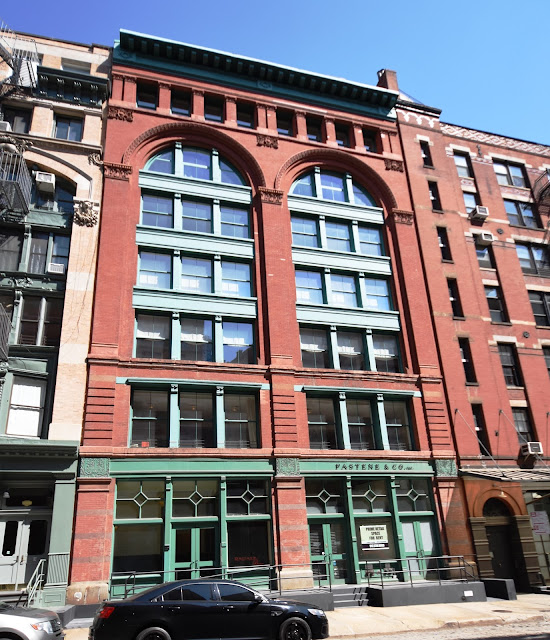 In the 1870s and '80s the Tribeca neighborhood around Franklin Street was widely known as the “dry-goods district.”  But by June 1, 1890, when real estate operator John T. Williams purchased the two brick “store and tenement” buildings at Nos. 152 and 152 Franklin Street, the “produce district” was engulfing the area.

Williams paid the estate of Julia A. Apgar $60,000 for the 51-foot wide property.  The price would translate to about $1.6 million in 2016.   Six days later the Real Estate Record & Builders’ Guide noted “We understand that Nos. 152 and 154 Franklin street…will be improved by the erection of an iron and brick building.”  And so it would be.

Williams commissioned the prolific architectural firm of John B. Snook Sons to design the new building.  Completed in 1891, the seven-story loft structure was similar many other Romanesque Revival buildings rising throughout the district.  Two six-story arches which embraced cast iron framed openings dominated the façade.  A false loggia at the top floor, created by stubby brick pilasters with terra cotta capitals, was topped by a sheet metal cornice.

As the building was nearing completion Eisner & Mendelson was operating at No. 6 Barclay Street.  They soon took over the entire Franklin Street structure.  Moritz Eisner and Joseph Mendelson had begun their wholesale drug and importing business in 1882 in Philadelphia.  By now they had moved their entire business to New York.

In 1894 Charles Morris noted in his Makers of New York that “The business of this firm has grown until it is now large and extensive, with important interests in Europe, the house having an office in Berlin, Germany.”

Eisner & Mendelson imported and sold patent medicines, including Johann Hoff’s Malt Extract.  An 1893 advertisement claimed “a dozen bottles of it are equal in nutriment and tonic qualities to a cask of ale.”  Potential customers were warned “Beware of imitation, the Genuine must have the signature of ‘Johann Hoff’ on the neck of every bottle.”  It was a admonition that would later prove ironic.

The firm’s advertisements were accompanied by sketches, usually or musclemen surrounded by bottles or cases of the tonic symbolizing the vigor and strength the user would enjoy.

The ongoing development of the neighborhood was evidenced in The New York Time’s reporting of the sale of Nos. 152-154 Franklin Street on September 30, 1894.  “Mr. Catlin’s [sic] purchase of the business property at 152 and 154 Franklin Street also represents an investment.  The vendor, Mr. John T. Williams, made a profit of $25,000 or more in the transaction, but the purchaser has obtained a bargain which the future will make none the less valuable.”

In the meantime, Eisner & Mendelson continued selling tonics and elixirs.  In 1897, in addition to Hoff’s Malt Extract, they were advertising Carlsbad Sprudel Salt and were the sole United States agents for Celestins Vichy water.  A Carlsbad Sprudel Salt advertisement that year promised “Since five centuries it has been acknowledge by the medical faculty to be the best and most effective mineral salt for all ailments of the liver, catarrh affections of the stomach, bile, bile pigment, gallstones, temporary and habitual constipation, &c.”

But the reputation and success of Eisner & Mendelson was soon to be threatened.

In 1895 the firm was sued by wholesale drug company Tarrant, the U.S. representative of Hamburg, Germany manufacturer Leopold Hoff, for counterfeiting Hoff’s Malt Extract.  And on April 5, 1895 Tarrant issued a warning to its customers which said in part “Our claim that the substitute, Hoff’s malt extract, sold by the Eisner-Mendelson company, is a domestic article is now acknowledge by them in a postal card issued yesterday, stating that their so-called Hoff’s extract is manufactured in Newark, N. J.”

Then in 1900 the widow of Andreas Saxlehner, the Hungarian bottler of the mineral water Hunyadi Matyas, sued Eisner & Mendelson for the same crime.   The firm had imitated the authentic bottles and labels.  Part of Mrs. Saxlehner’s suit alleged “their general appearance is such as to deceive the casual purchaser, and that such bottles and labels were evidently designed for the purpose of imposing the defendant’s waters upon the public as those of the plaintiff.”  The wronged widow sued for $30,000 damages and six years later was awarded $31,030.36.

The bad press and the hefty fines were possibly the reason that Eisner & Mendelson left Franklin Street.  Shortly after the 1906 verdict, the Western Union Telegraph Company had taken over the building as a storage facility.

Disaster occurred at 4:10 on the morning of December 8, 1908.  Fire broke out on the first floor and by the time it was discovered was a roaring inferno.  The watchman, Thomas Townsend, was aroused by “two muffled explosions,” although nothing explosive was stored in the building.

The city had recently installed its “high pressure service” to certain fire hydrants and the Franklin Street fire would be its first test.  The New-York Tribune reported “It was the biggest fire in the city since the installation of the high pressure service, and so successfully was the fire fought by this means that it will probably mark the passing of the fire engine within a few years.”

Fifteen lines of hose poured 9,000 gallons of water per minute onto the blaze.  Despite the highly-touted success of the new system; newspapers described the building as a total loss; The New York Times saying it was “practically destroyed.”  Damage estimates to the building reached $250,000.

Although the building was essentially a burned out shell, the heavy masonry walls survived and Caplan rebuilt the interior.  On May 9, 1914 he signed a long-term lease for the entire building with P. Pastene & Co.    Importers of Italian groceries, the firm had been founded in 1874 by Peter Pastene.  Following his death in 1901 the operation was taken over by his son, Charles A. Pastene.

Pastene & Co. was ousted after another produce merchant, Neuman & Schwiers Co., purchased the structure from the Caplan Estate in August 1927.  The New York Times described the new owners as “wholesale dealer in imported and fancy groceries, who for years have been located at 18 Worth Street.”  Pastene & Co. had to pack up quickly to its new space in No. 131 Hudson Street.  “The buyers will secure possession of the property and move in the course of a few weeks,” advised The Times on August 11.

After being in the wholesale grocery business for half a century, James S. Neuman died at his home on September 12, 1936 at the age of 64,  The firm continued on in the Franklin Street building for another two decades.

Then, in 1936, P. Pastene & Co. came home again.  On August 4, 1956 The New York Times reported "Pastene & Co., one of the oldest Italian wholesale grocery and importing concerns in the city, has purchased for occupancy the seven-story loft building…at 152 Franklin Street.  The company was a tenant in the building thirty years ago.”

Pastene & Co.’s prominent lettering above the entrance earned the building the unofficial name of The Pastene Building.  The firm operated from the building for another four decades.   Then in 1994, as the Tribeca area changed from produce distributors and warehouses to galleries, restaurants and trendy shops, the Franklin Street building was converted to loft apartments with a roof garden. 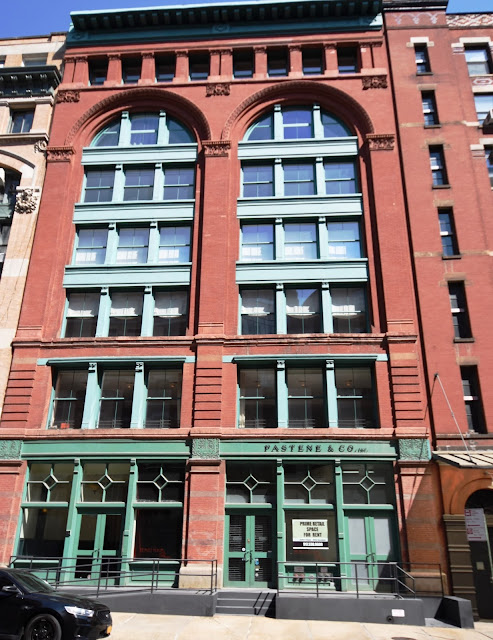 The renovations resulted in a handsomely-restored façade and architecturally sympathetic storefront.