The Broadway Fashion Building - No. 2315 Broadway 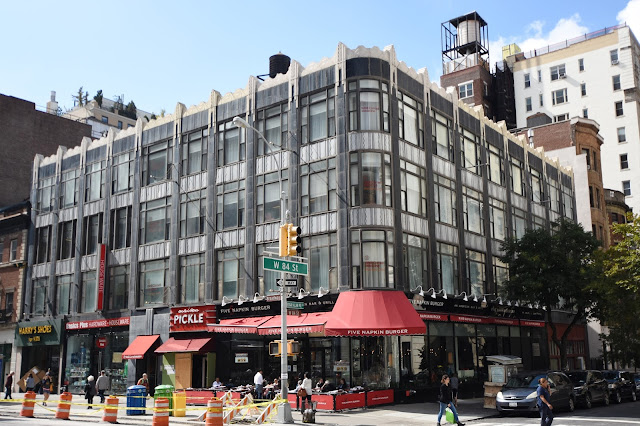 In 1926 M. Henry Sugarman and A. G. Berger partnered to form the architectural firm of Sugarman & Berger.  Two years later they started plans for what would be, perhaps, their most memorable project--the massive Art Deco-style New Yorker Hotel.

Around the time that ground was broken in 1929 the architects received another, much smaller commission--The Broadway Fashion Building at the southwest corner of Broadway and 84th Street.  Abraham Gevitz's Broadway and Eighty-fourth Street Corporation envisioned an upscale retail center on the site.  And despite the disastrous Stock Market crash of October 24, 1929, they forged ahead.

A year later, on November 30, 1930, The New York Times reported that the construction was moving along.  Foundations were completed and the opening of The Fashion Building was projected for March 1, 1931.  "All floors will be devoted to retail shops," explained the article.  "The facades will be 90 per cent glass, with white stainless metal for decorative work, and a system of exterior and interior illumination will give the structure an unusual appearance at night."

Sugarman & Berger's completed four-story building was on the cutting edge of commercial architecture.  As The Times had anticipated, expanses of glass flooded the interiors with daylight and produced an airy, weightless quality.  Spandrel panels between the floors were filled with zig-zagging Art Deco designs, and the parapet was an irregular mountainscape interrupted by jazzy geometric elements which extended down the top floor piers.  Especially eye-catching was the sleek curved corner with its rounded glass openings. 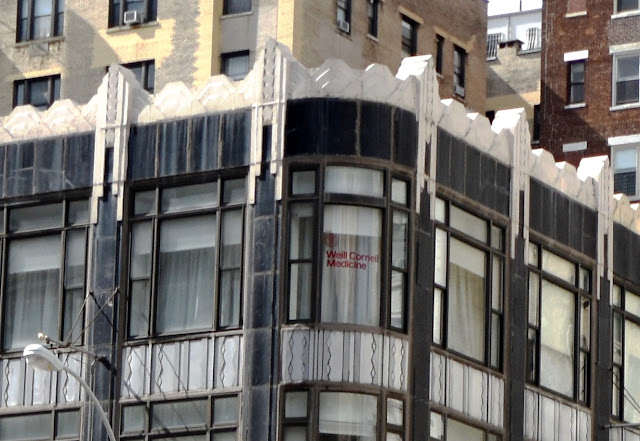 Things start out well for the new Broadway Fashion Building.  Schiller & Pearlstein leased the entire first floor in 1931 as home to its fur shop, for instance.  But before the decade was out, the Great Depression had taken its toll on the high end tenants.  Stores like Blondee Millinery went bankrupt and closed, forcing the Broadway Fashion Building to look for a new type of occupant.

The former retail shops were converted to offices.  In March 1942 the Stock Exchange firm of Weingarten & Co. opened its uptown branch in the building; and by 1945 The Apartment Locating Bureau had offices here.

World War II came to an end that year, but patriotism and the esteem of America's military men still was fervent.   So when Charles Weingart, head of the Apartment Location Bureau, was caught cheating a soldier's wife in 1946, he could expect no compassion.

Mrs. Pearl Alter had agreed to rent a furnished apartment at No. 23 West 76th Street for $200 a month.  But she was told she had to pay $2,000 for the furniture.  Suspicious, she went to the Office of Price Administration.   An OPA inspector, Albert L. Solomon, posed as the veteran soldier, examined the apartment, and paid the $2,000.  And then Weingart was arrested.

Solomon testified before the War Emergency Court that the furniture was worth no more than $200.  Charles Weingart was given a $100 fine (more in the neighborhood of $1,200 in 2016) and a sharp reprimand from the judge.  "It takes no imagination to see how you were making easy money.  Your actions were brazen.  The public must be protected against such vicious practices."

In the early 1950s the building became home to the offices of New York Stock Exchange members Hirsch Co., and to the Metropolitan Life Insurance Company.  Two female employees of Metropolitan Life endured a terrifying ordeal here on May 5, 1953.

That afternoon 58-year old May G. Costello and Helen McInery, 35, left the third-floor office headed to the Corn Exchange Bank Trust Company at 81st Street and Broadway to make a deposit.  May carried an envelope containing $7,000 in cash and Helen one with checks.

Just as they stepped onto the elevator, a "slim young man in a gray ensemble that included gloves to match," according to The New York Times, emerged from a hallway washroom and got on with them.  When the elevator operator closed the door, the man pulled out a pistol and demanded the envelopes.  He returned Helen's envelope when he saw it contained only checks.

Both women and the elevator operator were ordered to face the rear of the cab.  The robber with his well-coordinated wardrobe took the elevator to the basement where he locked all three in a closet.  He escaped with the cash while the three prisoners pounded on the closet door, finally being released by a janitor.

The following decade saw various tenants, like the West Side Planned Parenthood Center which opened in November 1959, and the Police Athletic League which took 6,000 square feet for its new Pal Joey project.

In the last quarter of the century the Fashion Building became a publishing center of sorts.  By 1975 Atcom, Inc. was here.  The firm published periodicals like The Journal of Psychological Anthropology and Undercurrent, described as "the private, exclusive guide for serious divers."  By 1995 it was joined in the building by the Princeton Review.

At the time of the article, the building's owner was fighting landmark designation.  His lawyer told Dunlap "We're going to fight them.  This commission has nothing to do, so they're going around saying, 'Let's make this a landmark.' It is not a landmark." 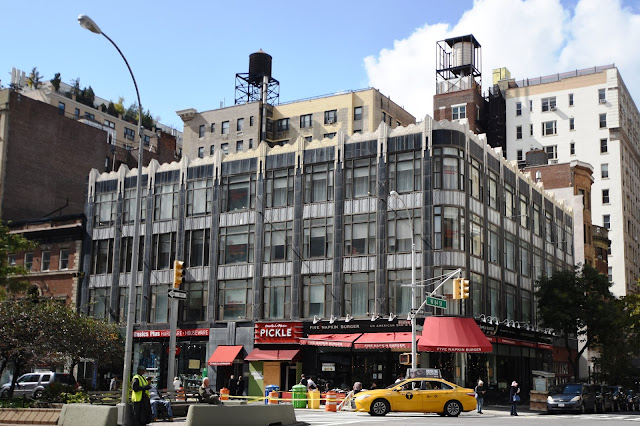 And, indeed, it is not.  At least not officially.  But a 2012 restoration of the parapet and masonry, coupled with a 2007 renovation of the ground floor, helped undo years of indifference to the building's striking architecture.  Designated or not, the Broadway Fashion Building is an Upper West Side landmark--ask anyone.