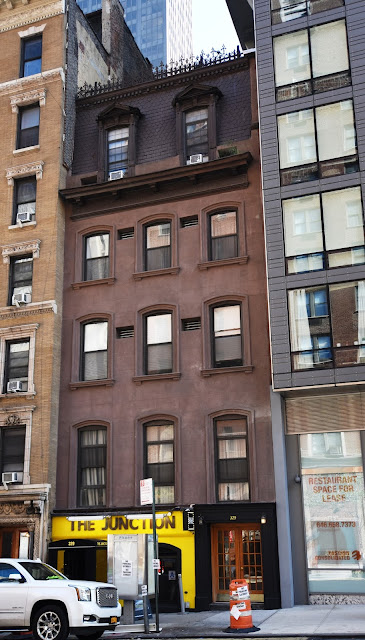 When builder George H. Hamilton completed the 24-foot wide row house at No. 329 Lexington Avenue in 1858, he was on the cutting edge not only of high-end residential neighborhoods in Manhattan, but of domestic architectural trends.

Only six years earlier the vastly wealthy Dodge and Phelps families had begun construction on their three freestanding brownstone mansions on Madison Road (later renamed Madison Avenue), between 36th and 37th Streets. Theirs were the first dominoes to fall in the creation of an exclusive residential district.

Hamilton's row house on the east side of Lexington Avenue, between 38th and 39th Streets, was four stories tall above a high brownstone stoop.  The elliptically-arched openings sat within handsomely carved frames; their sills sitting on delicate stone brackets.  At the parlor level, where floor-to-ceiling height windows matched the proportions of the entranceway, there was most likely a cast iron balcony.

Most striking, however, was the fourth floor in the form of a steep mansard roof.  The French Second Empire style had arrived in the United States only within the past two or three years.  Its appearance at No. 329 Lexington Avenue meant that Hamilton intended the house for a discerning buyer; one aware of continental fashion and taste who would gladly turn his back on the predominant Greek Revival style overwhelming the city.

A complex pattern of slate shingles covered the mansard.  Two ornate dormers punched through, capped with triangular pediments.  Above a minimal cornice with stone dentils was perched an elaborate cast iron cresting--the latest in Victorian design.

The family which moved was without question well to do financially.  But the woman of the house was apparently frugal, nonetheless.  Pre-Civil War households retained staffs with clearly defined duties.  Cooks, drivers, laundresses and butlers all knew their individual duties.  A "waitress" needed to be more refined than a chambermaid.  She served the food to the family and their guests and waited upon their whims.  The chambermaid cleaned.  And as reflected in the title, she performed the unpleasant job of removing and cleaning chamber pots.

But the lady at No. 329 Lexington Avenue economically clumped up to three job descriptions together.  On June 1, 1867 she placed an advertisement in The New York Herald "Wanted--A neat and capable woman.  As waitress and chambermaid and to assist in washing.  References required."

By the 1880s the house was home to wealthy retailer S. C. Barnum and his wife, Amelia.  In 1845 Barnum had opened what he now marketed as "Barnum's old reliable clothing house" on Chatham Square.  While her husband added to their fortune downtown, Amelia struck out in the real estate business, buying properties and leasing them.  But her great passion seems to have been dogs.

In 1891 she was Vice President of the American Pet Dog Club.  The organization's reputation reached as far away as Honolulu, where The Daily Bulletin reported on February 20, 1891, "After invading almost every other domain that has hitherto, by the men at least, been considered to the lords of creation, the American woman is now arranging to enter actively into the field of bench shows."

The newspaper referred to the pedigree dog shows which, until now, had been male-only territory.  "The new departure is to be made by the American Pet Dog club, which is composed almost entirely of ladies, though, with the most praiseworthy magnanimity, male creatures are not entirely excluded."

The article noted "Mrs. Barnum...is the wife of a very wealthy clothing merchant, and lives in an imposing mansion on Lexington avenue, New York.  She has a ways taken an active interest in dogs, and was at one time a prominent exhibitor at the bench shows.  At present Mrs. Barnum is content with the honor of possessing the fattest and jolliest pug in the club."

Amelia routinely offered her home as the meeting place of the club.  But then in 1894 the Barnums left.  The title was held, as was expected at the time, in Amelia's name, and on July 14 The Real Estate Record & Builders' Guide noted that she had leased the house for three years at $2,200--a little over $30,000 per year in 2016 terms.  It was the first hint of financial problems in the Barnum household.  The following year the Sheriff held a court-mandated auction of the property for unpaid obligations.

The Barnum home was taken over by the S. G. Cloos School of Modern Languages.  Unlike some private schools, Professor Cloos focused on underachieving sons of wealthy families.  In September 1895 he described himself in The New York Times as giving "special attention to coaching pupils who have failed to pass their examinations at Columbia College.  He has always met with noted success in remedying their deficiencies."

Cloos had established his school in 1870 and, speaking in the third person, wrote "Prof. Cloos is always able to preserve order in classes which have sometimes contained as many as sixty-five boys at a single lesson.  He also teaches English to Spaniards, French and Italians by a method peculiarly his own, and which has always been productive of speedy and thorough results."

No. 329 Lexington Avenue saw a quick succession of owners.  It was bought early in 1897 by Edward H. Van Ingen for what the Record & Guide called "the remarkably low price of $26,000" (more than three quarters of a million dollars today); but weeks later he was looking to sell it "at a reasonable advance on very favorable terms."

The next owner, Charles Conti, found himself in financial problems as well.  In 1901 he was embarrassingly listed among those who were behind in his personal taxes.  The mansion was home to Augustine J. Smith by 1904, and A. V. Whittemeyer in 1909.

The noise and upheaval caused by the excavation for the Lexington Avenue subway was possiby a factor in the rapid turnover of the property.  By the early 1920s it was being operated as a rooming house.  One tenant named Maurice was out of work in November 1922 when he placed an ad in The New York Herald.  "Chauffeur-Mechanic:  Belgian, 9 years experience Rolls Royce, Renault, Simplex, Locomobile; best references."

Also living here that year were Mabel Elweil and Grace Ryson, both unmarried.  The young women were passengers in a Ford late on the evening of April 30 it crashed into a Studebaker limousine at the corner of 37th Street and Seventh Avenue.  "The noise of the collision attracted a large crowd of people, who had just left the theaters," reported The New York Herald the following morning.

The horrific crash left several people injured, including the chauffeur of the limo, who lost four fingers.  The driver of the car which carried Mabel and Grace was apparently in the wrong.  The Herald noted "The driver jumped out as soon as the collision occurred and vanished."

While Grace received only a cut and bruises and was able to go home, Mabel was taken to Bellevue Hospital with two fractured knee caps.

Two years later the owners, 311 Lexington Avenue Corp, hired architects Charles Kreymborg & Son to renovate the old mansion.  Completed in 1925, the changes included the removal of the stone stoop, the installation of a "studio" at sidewalk level, and "non-housekeeping apartments" on the upper floors.

Among the tenants living here in the early 1940s was the Cornelius Agnew Demarest family.  Victoria Booth Demarest was well known as a lecturer, author and preacher; and was the granddaughter of General and Mrs. William Booth, founders of the Salvation Army.

On December 4, 1943 daughter Victoria Beatrice Demarest was married to the Rev. Claxton Monro.  The wartime wedding had a noticeably military atmosphere.  Victoria's brothers, John, David and Arthur, were ushers.  Arthur was a member of the USA Glider Infantry and David was a Pharmacist's Mate Third Class in the Navy.  Another usher was Lt. Brent W. Loew of the US Naval Reserves.

One year later the family's joy was crushed when word was received that David Livingstone Demarest had been killed in action on December 3, 1944 "in action with the Marine Corps in the Pacific area." 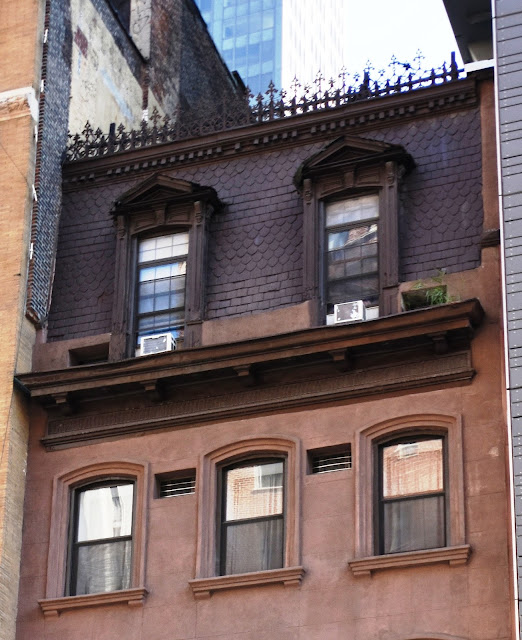 Squashed in among along the Lexington Avenue block of business buildings, the old brownstone is decidedly out of place.  Amazingly the upper floors retain their 1858 residential flavor and the wonderful mansard level is, while beleaguered, exceptionally intact.