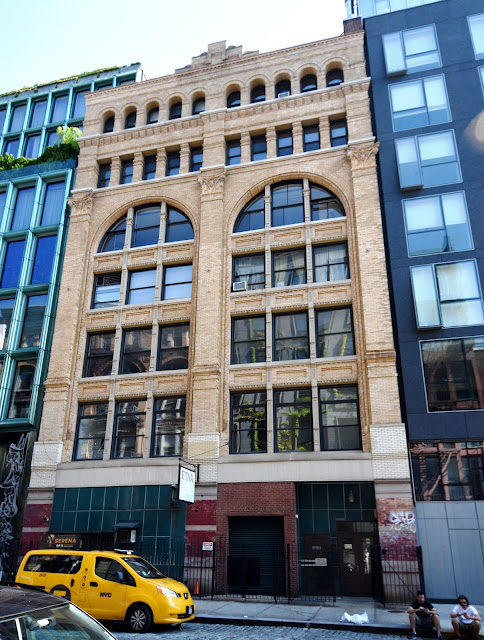 In 1843, when wealthy merchant John P. Stagg moved into the new three-story, brick faced house at No. 42 Bond Street, the long block between Bowery and Broadway was among the most exclusive in the city.  Next door, at No. 44 lived the John H. L. McCracken family.

Two decades later the block of elegant mansions--some of them faced in marble--had declined.  No. 44 was operated as a boarding house by 1868.  Susan B. Anthony rented a room here that year, describing it in a letter as "plain quarters--at 44 Bond Street--double bed."

In 1886 both houses were owned by James A. Foster and his wife, Anna.  Five years earlier they had purchased the homes, along with No. 40 Bond Street and Nos. 43 and 47 Great Jones Street.  Their ambitious investments failed, and on Tuesday, October 5, 1886 the properties were sold at foreclosure auction.

Developer Morris B. Baer purchased Nos. 42 and 44 Bond Street; but was apparently in no great hurry to replace the vintage houses.  It was not until May 25, 1889 that the Real Estate Record & Builders' Guide noted "Bond street is likely to become an important business street later on.  A few changes have been made in its character recently.  Another improvement is to be added in the shape of a seven-story brick and stone building, which is to be erected at Nos. 42 and 44 Bond street, for Morris B. Baer."

Baer had commissioned the architectural firm of Buchman & Deisler to design the new factory building, projected to cost between $50,000 and $60,000.  Simultaneously powerful and dignified, its upper floors were dominated by two four-story arches, separated by shallow pilasters crowned with terra cotta Corinthian capitals.  The heft of the expansive openings was offset by two floors of smaller windows above; keeping the visual weight of the structure grounded.  A triangular pediment above the minimal cornice served double-purpose as a flag pole.  The Real Estate Record & Guide described the building as "a fine piece of construction."


Even before the building was officially completed (in 1890), tenants moved in.  In 1889 apparel manufacturers Schwab & Frankenhauyser; King, Hinckley Co.; and Judson Bros. were advertising their new address.   By 1891 they would be joined by Alonzo Kimball & Co., makers of "pin tickets;" Louis M. Ernst, "youths' and boys' clothing;" and Carwalho & Herboth, makers of pantaloons.

As was the case with many factory workers, the male employees of Carwalho & Herboth formed an amateur baseball team.  On May 25, 1891 one member, J. Davis, advertised in The Evening World.  "The 'XL' Baseball Club would like to hear from all clubs in the pantaloon business."

Although Baer had successfully filled his building with apparel manufacturers, on September 24, 1892 the Record & Guide pointed out "The owner, it is understood, desires to lease the entire building to one party for a long term, from February next, at a low rental."

When Frank Leslie died in 1880, his publishing business (which included Frank Leslie's Illustrated Newspaper, Frank Leslie's Lady's Magazine, and The Boys' and Girls' Weekly, among other publications) was in near bankruptcy.  Miriam, a noted feminist and author, took over the business--going so far as to legally change her name to Frank Leslie in 1881.  By the time the firm moved to Nos. 42-44 Bond Street it was in the black, with 300 employees and 13 printing presses.  And the assertive publisher gave the building a new name.

On May 15, 1894 The Evening World reported "Mrs. Frank Leslie has sent out several hundred invitations to her friends and to the publishing fraternity generally for a 'house-warming' Thursday evening.  At this time the formal opening of the new Frank Leslie Building, 42 and 44 Bond street, will occur."

Perhaps Leslie's most surprising publication considering its northern location was the Confederate War Journal begun in 1893.  Subscribers, for 50 cents, could have their 12 issues bound at the end of each year.  Frank Leslie's urged "When completed the whole will constitute a splendid Confederate History of the War, and should be on the shelves of every student or reader who desires to read more than one side of the greatest contest of modern times."


The Bond Street neighborhood was filling with publishing and printing firms; and Frank Leslie's sublet part of the building to the Star Book and Novelty Company.  As 1896 drew to a close, that business was not doing well.  Its publisher, Frederick L. Klenk, who lived with his wife in a fourth floor apartment at No. 164 East 80th Street, traveled to Philadelphia in mid-February 1897 in hopes of re-establishing his firm there.

After a week of no success, the 40-year old Klenk saw no way out of his business problems.  On February 24 he walked to Philadelphia's Fairmount Park and ended it.  The following morning The New York Times reported he was found "with a bullet hole in the head...It is surmised that despondency caused him to take his life."

Despite her 10-year lease, Mrs. Leslie left Bond Street in 1900, prompting Morris Baer to once again advertise the building as available: "long lease--low rent."   In 1901 left New York City, confident that Nos. 42-44 Bond Street was leased and and business was good.  One lessee, however, had sublet the sixth floor to a disreputable tenant.


On the evening of March 15 a group of police officers, acting on a tip that illegal gambling was going on there, raided the space.  The next day The New York Times reported "It was well fitted up, and there were numerous betting booths."  Seven men were arrested, four of which were charged "with aiding and abetting and keeping a poolroom."  "Poolroom" was the term used for an illegal horse betting operation.

Morris Baer's attorney was quick to sent a letter to the newspaper's editor, espousing his client's innocence.  He stressed that the building was "leased by Mr. Baer as a whole to lessees, with a privilege of subletting the floors not used by them.  The first knowledge that Mr. Baer had of what was going on was what I communicated to him from yesterday's papers."

Baer sold Nos. 42-44 Bond Street the following year.  It continued to house apparel and printing firms, like the H. F. McCafferty Printing Company here in 1903; as well as other businesses like Monahan's Express Company at the same time.

The year 1908 saw three new tenants.  The Freytag Printing Company moved here from No. 108 Walker Street where it had been for many years; the newly-formed G. B. Sardi, makers of artificial flowers moved in (Millinery Trade Review noted he would be "making a specialty of flowers and fancy feathers, quills in particular"), and Brooks Brothers "dealers in ostrich feathers" signed a lease for the store and basement.


Brooks Brothers (not to be confused with the apparel retailers) did well.  In July 15 the firm added the sixth floor to its lease.

Millinery firms continued to take over the block from the printing industry.  In 1920 Alfred Popper took 10,000 square feet.  The company's success was astonishing in that it had never hired a salesman, and did all its business through mail-order and advertising.  The year it moved in Alfred Popper advertised "Hats at 'Human," Pre-War Prices."  Also in the building was Martin-Giusti Co., makers of milliners' apparatus like hat blocks, flanges, dies and machinery.


While hat-related businesses continued to rent in the building, the Great Depression brought one very different type of tenant.  By 1931 the Volunteers of America was here, serving Christmas dinner to "about 30,000" single men here that year.  The organization was in the building at least through 1933.

The millinery district had moved northward by mid-century; and Nos. 42-44 Bond Street was home to more industrial tenants, like A. C. Elevator Co. and Etna Tool & Die.  One company, however, still maintained a semblance of the former district, at least in name.  The Arlington Hat Co. manufactured inexpensive novelty hats, like the woven fiber "Howdy Doody" model.

In 1976 Joseph Albert's Check Cashing Company occupied space here.  It was the scene of a terrifying robbery on August 20 that year.  As Leonard Rosen and two security guards returned from a nearby bank with $35,000 in cash two panel trucks drove up.  One blocked Rosen's vehicle and the other rammed it from behind.  The Times reported "Then five armed robbers jumped out."

Although the security guards carried handguns, they were quickly disarmed.  Rosen and the guards had a guard dog in the automobile.  One of the robbers repeatedly threatened "If the dog jumps, I'll kill you."

When another car arrived the thieves escaped in it, leaving the two panels trucks behind. 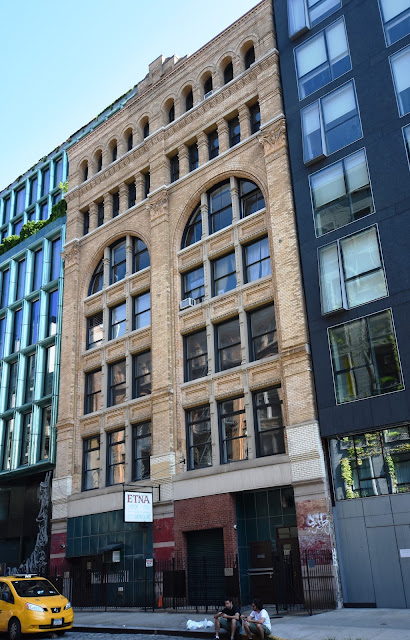 In 2007 two floors of the building were converted to joint living and working quarters for artists.  One sprawling apartment took up the entire fourth floor while the seventh floor was divided into two.  Although Buchman & Deisler's two ground floor storefronts have been replaced with an indescribable monstrosity; the upper stories remain largely unchanged, including the unusual stepped parapet.