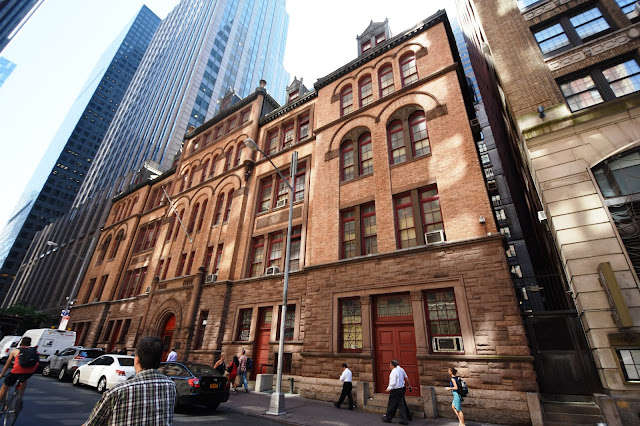 Prior to 1890 the Grand Central Stables occupied the large lot at Nos. 114 through 120 West 46th Street.  The nearby Longacre Square was the center of the carriage-making industry; but the northern expansion of the city coupled with an exploding immigrant population was changing the neighborhood as commercial and apartment buildings were constructed.  The new inhabitants of the district required a public school.

On November 28, 1890 Arthur McMullin, a clerk in the Comptroller's office, informed the Board of Education that the site of the stables had been rented until May 1, 1891, "at a rental of ninety dollars per month, payable in advance."  The city had agreed to pay nearly $2,500 a month in 2016 terms.  Only a month later, however, the Committee on Sites and New Schools noted that the land had been purchased instead.

On July 1, 1891 30-year old Charles B. J. Snyder took the position as Superintendent of School Buildings of the Board of Education.  Most likely the architect's first project was the design of Public School 67.  Snyder's ensuring 30 years of designing public schools would be remembered for his focus on ventilation and light and improved safety; as well as his ability to create architecturally handsome structures.


For Public School 67 he turned to the popular Romanesque Revival style.  Construction was begun in 1893 and completed a year later.  A base of rough-cut brownstone supported three stories of sandy-colored Roman brick.  An attic floor rose to full height with a row of five openings in the central pavilion; while ornate copper-clad dormers perched on either side.

Snyder incorporated the customary elements of the Romanesque Revival style--swirling medieval style carvings, heavy arches and fanciful beasts.  But his inclusion of two exquisite Pre-Raphaelite style portrait medallions on either side of the great entrance arch was a marked departure.

Many of the tenement children could not afford the luxury of days spent in school.  Daytime jobs in shops and factories were necessary to keep their families afloat.  In response, on July 1, 1896 the Board of Education announced that the New-York Evening High School would begin operations in Public School 67.   Most of the free classes were aimed at instructing students in the manual arts, thereby assuring them a vocation.

The courses included instruction in architectural, mechanical and free-hand drawing.  The New York Times noted in 1898 "The classes give opportunities to students of architecture, machinists, stonecutters, masons, carpenters, cabinetmakers, decorators and those working at the trades in general to learn the principals of drawing relating to their respective vocation."


On the morning of December 9, 1902 fire broke out in the building.  The Times reported "about 300 children were marched out of the school, and the fire was subdued."  Shortly afterward a teacher was shocked to find that her watch and chain, valued at $60, were missing.

The mysterious crimes were solved three days later when 74-year old second-hand book dealer Andrew M. Copeland was arrested, along with four accomplices.  Copeland had bribed assistant janitors and a schoolboy to pack the books up.  During the confusion of the fires, the boxes were removed from the school and carted away.


By the time of Copeland's nefarious arson plots, the night school was adding business to its curriculum.  On January 20, 1903 The Times reported "Two classes in typewriting were opened recently in the New York Evening High School for Men...and were filled to the limit on the very first night.  Several applicants have been placed on the waiting list for this subject."

Clerical office help at the time was still a mostly male occupation.  Potential employers were looking for well-rounded secretaries.  For that reason the school announced "Hereafter, typewriting will be offered only to those who have acquired some skill in phonography."  "Phonography" would later become known as stenography, or shorthand.

The variety of classes available was indicated by The Times advising "There are still some vacancies in phonography, chemistry, applied electricity, mechanical and architectural drawing, mathematics, and languages."

The practicality of the trade-oriented night school in the tenement neighborhood resulted in Public School 67 joining with the High School of Commerce in 1906 with similar daytime classes.  At the time it had an enrollment of 1,700 pupils.

Three years later the school underwent another innovation when it introduced classes for the disabled.  The Board of Education announced that the Association of Teachers of CrippledChildren had been "quietly formed" in December 1908 "to arouse a greater interest in the welfare of the crippled child in the public schools of New York."

At Public School 67, explained an article in The New York Times on March 21, 1909, "the regular public school curriculum is followed, and the little cripples share in all the education advantages that are given to the strong and healthy."

Students at Public School 67 received an impromptu lesson in civil disobedience on February 2, 1912.  In an early example of busing, 50 male students of Public School 51 on West 54th Street near Eleventh Avenue were transferred to P.S. 67 because of overcrowding.   The boys were disgruntled not only because the new school was significantly farther from their homes; but because they were soon to graduate.  They also complained that there was no room for them at P.S. 67.  One boy told reporters "They made us sit in the assembly room, and we aren't going to stand it." 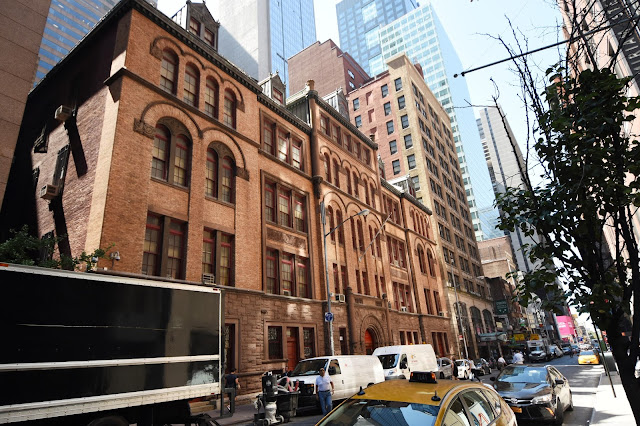 And so 16-year old John Colton, "a stocky boy" who had been captain of the basketball team at Public School 51, organized a walk-out.  A newspaper reported "they didn't enter their classrooms at all, but spent the day in a demonstration before their new school.  They marched through the streets with banners: 'We are on strike, Public School 51,' and sang and shouted in defiance to the teachers who tried to conquer them."

The police arrived, but rather than arrest the demonstrators, moved them away from the school building.  The Times noted "Principal McNally of School 67 got into communication with some of the boys' parents in the afternoon as the first step in restoring order."  The parents swayed more authority of the teens than did the police.  "A number of the youths were brought around to a different view of the situation."

A few of the parents, however, sided with the boys.  One, Mrs. Haff, told reporters "We are hard-working people and we have made sacrifices to keep the boys in school.  We have been thinking all along how fine it would be to have them graduate, but now they are really turned into the street."

The determined boys learned an important lesson in political science on a small scale that day when their demands were eventually met.

A much different lesson in civics was learned by 13-year old Mike Botto and his schoolmates Herman Wenzel, 10, and Edgar Sweeney, 11 in 1921.  During the first week of March Botto, whom The New-York Herald deemed "more or less of a student," was disciplined by Assistant Principal Amy Blenenfeld.  He did not take the episode lightly, the newspaper saying "he considered it a serious affront to his manly dignity."

To get revenge, the three boys climbed into a window of the school on Saturday March 12.  Using a penknife, Botto jimmied the door to Miss Blenenfeld's room.  With the aid of his penknife again, he broke into the teacher's desk.  The boys tore up report cards and other paperwork, spreading the remnants over the classroom.  They used bottles of red, blue and black ink to draw "futuristic and cubist and dadaistic pictures upon the walls and the floors, creating some starling designs.  But," said the newspaper, "three bottles of ink will not last forever, even in the hands of three small boys.  They cast about for something else."


The vandalism continued with the boys shredding students' drawings from the cork board, and carving "charming designs" on the wooden desks, particularly Miss Blenenfeld's.  Then, just as they prepared to leave, Mike Botto noticed the two goldfish bowls containing seven fish.  The Herald reported "They emptied the bowls, stabbed the goldfish to death with the pocket knife, and put the bodies in Miss Blenenfeld's desk and carefully closed it.  Then they went home satisfied and not really knowing that they had done wrong."

They discovered that, indeed, they had done something wrong when Detective Cooney appeared at each of their homes on the night of March 18.  In an article headlined "3 Kids Caged for Gold Fish Murder" The New York Herald explained that the vandals were learning about the justice system.

"Advices from the [Children's Society's] rooms last night stated that Mike and Herman and Edgar are gripped by Remorse with a capital R, and have sniffed themselves to the point where they are quite receptive to moral teachings."  When Mike Botto was informed by attendants that he would appear in court the next morning, he gulped "I hope the Judge don't forget about puttin' coals of fire on somebody's head."

Public School 67 and the High School of Commerce continued here for a few more years.  The building became an annex of the Haaren High School by 1928.  Then on October 25 1947 the Board of Education announced that the building would receive a $57,569 conversion to the system's first School of Performing Arts as an annex to the Metropolitan Vocational High School.

The Board explained "300 boys and girls will be selected from among city-wide applicants for the new school on the basis of talents and abilities in their respective fields.  The institution will have a regular four-year curriculum, but will emphasize courses of study that will be of value in the performing arts."

Four years later, when the school's first class prepared for graduation, The New York Times updated its readers on its success.  The only school of its kind in the country, its students had already appeared in summer stock and 'in such Broadway shows as The King and I, Flahooley, Gentlemen Prefer Blondes and Seventeen.  They had received lectures by celebrated artists like Jose Ferrer, Clifford Odets, Leo G. Carroll and Jean Dalrymple.

On January 30, 1960 the School for Performing Arts announced plans to merge with the High School of Music and Art, saying "the building it occupies--an antiquated former elementary school--is sorely inadequate."

During renovations of the vacant building in the winter of 1988 fire broke out.  The inferno completely gutted the vintage structure, leaving only a burned-out shell.  Rather surprisingly the ruins were not demolished, but the interiors were rebuilt.  The old building became home to a girls-only annex to the Murray Bergtraum High school.  Here young women studied business courses, an relatively unusual opportunity for females at the time.

A year following the death of the former First Lady, the school was renamed the Jacqueline Kennedy Onassis High School for International Careers in 1995.  Now co-educational, the school offers courses in international business studies, hospitality, virtual enterprise, tourism and accounting.  And, following the previous half-century tradition, drama and dance. 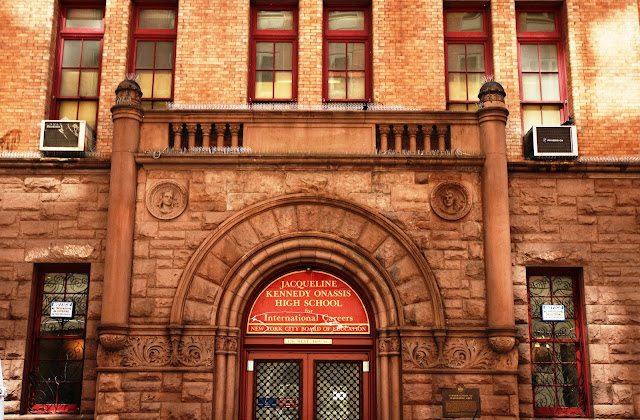 C. B. J. Snyder's first public school project survives in the much changed, bustling Times Square neighborhood with little noticeable outward change--a reminder of a time when tenement children poured into its halls and young men, optimistic of their futures, learned to use a typewriter.