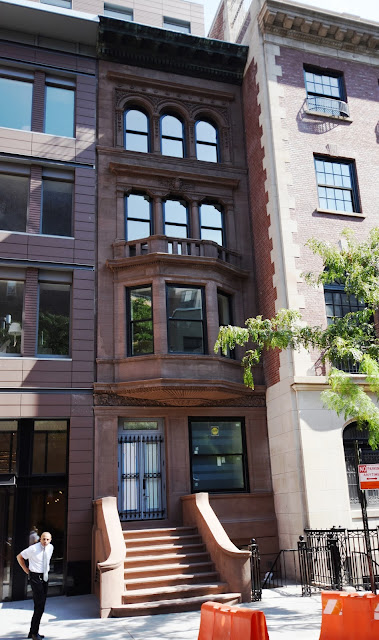 The first decade following the end of the Civil War saw an explosion of speculative development on the Upper East Side.  The Styles family—S. M. Styles, Frederick W. Styles and C. H. Styles—worked semi-independently on their building projects.  S. M. Styles, who doubled as a contractor and architect, brought his sons, John E. and Richard K. into his operation to form S. M. Styles & Sons.

In June 1876 C. H. Styles planned nine brownstone rowhouses that wrapped around the northeast corner of Madison Avenue and 74th Street.  Each would cost $12,000 to build—about a quarter of a million dollars in 2016 terms.  He commissioned S. M. Styles as his architect.

C. H. Styles seems to have had problems selling one of the homes.  On March 11, 1877 an advertisement in The New York Herald offered “For sale cheap—Call and see that fine four story brown stone high stoop house No. 31 East 74th st.; will be sold at a bargain.”

A year later, on March 3, 1878 the developer was willing to nearly break even on the still vacant house.  An advertisement explained “$5,000 cash will buy an elegant four story House, cabinet finish.”

Despite the bargain price, No. 31 East 74th Street was still unsold the following year.  On March 23, 1879 Styles offered “Finest located four story brown stone house in this city for the price, in perfect order throughout.”

Another prolific developer, William W. Hall, purchased the house in 1896.  By now Fifth Avenue in the 70s was filling with lavish mansions; and the side streets followed the trend.  The outdated two-decade old brownstones were rapidly being demolished or remodeled into more fashionable dwellings.  Hall hired architect Alexander M. Welch to transform No. 31 into a modern home acceptable to an upper class owner.

The renovations were completed in 1897.  Somewhat surprisingly, Hall and his architect seem to have focused on interior improvements.  The brownstone stoop was retained even when the “English basement” plan had fallen out of favor; and the old 1877 design was only vaguely veiled by the neo-Renaissance motifs.  The second floor sprouted an angled oriel which supported a third-floor balcony.  The arched openings of the top floor received handsome carved framing and an updated, projecting copper cornice was added. 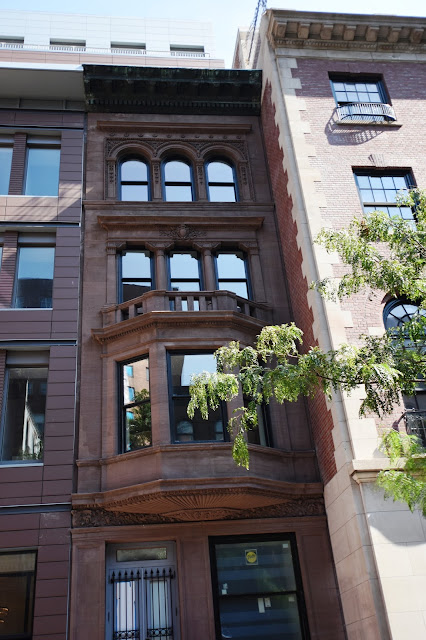 The renovations, while outwardly cosmetic, were successful.  William Hall quickly sold the remodeled 16-foot wide house to Raymond Lesher.  He was a partner with his brothers Arthur and Nathaniel in the “clothiers’ supplies” importing firm of Lesher, Whitman & Company.

Wyckoff had one grown son, Clarence, who had his own bachelor apartment in the Hotel Manhattan “when not at Palm Beach, Fla., or abroad,” according to a newspaper.  Like his son, William Wyckoff spent more and more time abroad.  He had two sisters, one in England and the other in Scotland.  Around 1905 his attention was focused on a Prussian woman living in London, Sophie Manasse.

The 60-year old’s romance culminated in April 1906 in a surprising coincidence.  Clarence P. Wyckoff returned to his apartment on the evening of April 5 to find a telegram from his father who was in London.  It revealed that William had applied to the Archbishop of Canterbury for a “special license” for the New Yorker and the Prussian to marry.

The New York Times reported “After he read it he looked up with a smile and said: ‘H’m, I’m to be married myself tomorrow.’”  The father and son, “both well-known members of society,” would miss one another’s nearly simultaneous weddings.

It was probably William S. Wyckoff’s overseas romance that had prompted him to sell No. 31 East 74th Street a year earlier.  In January 1905 Newman Erb, Vice President of the Pere Marquette Railroad Company, purchased the house for his daughter.

The generous gift was not a wedding present.  Fannie Erb had married Irving Meade Dittenhoefer on November 18, 1896—the same year that William Hall began the renovations.  The 42-year old Dittenhoefer had graduated from the Columbia School of Law in 1885 and was now a partner in the law firm of Dittenhoefer, Gerber James.

The couple had one son, Newman Erb Dittenhoefer, and like other modern and wealthy families, they traveled widely.  On May 1, 1908 Irving wrote to a former classmate “I have traveled extensively in Europe, having made automobile trips in Italy, France and Germany of over 15,000 miles.”

Unlike the previous owners, Irving and Fannie stayed for nearly two decades.  They sold the house in October 1919 to the 44-year old physician, Dr. Frederick Knowles and his 34-year old wife Sophia.  Living with the Knowles were Charles Stevens, the butler, and his English-born wife, Mahlik, the cook.

Knowles established his doctor’s office in the house.  When elevator operator John Martina Feirera collapsed at the corner of Madison Avenue and 74th Street on February 20, 1933, a market employee carried him to the Knowles house.  Sadly, the 30-year old died on the stoop before the doctor could be called out.

Knowles, now 71, sold the house in April 1946 to real estate operator Norman. S. Riesenfeld.   He quickly resold it to the World Federalists, U.S.A. and the residence became known as World Government House.  The goal of the global World Federalist Movement was to create “a new world order” that could prevent another international war.

Later that year, on November 11, 1946, the Duke and Duchess of Windsor arrived on the Queen Elizabeth.  Another passenger on the ship was heading to East 74th Street.  The New York Times reported “Ulric Nesbet, British representative of the Federal Union, who has designed a world flag, came here to confer with members of World Government House, 31 East Seventy-fourth Street.”

World Government House lasted only a few years at the address.  In 1949 the house was converted to apartments and the stoop was removed.  Among the most interesting of the businesses in the newly-formed commercial space throughout the upcoming decades was Alaska Shop—Gallery of Eskimo Art which occupied the store in the early 1980s.

In 2010 No. 31 East 74th Street got its stoop back—at a price.  CareOne, a firm that operates nursing and assisted-living facilities, hired restoration architects Beyer Blinder Belle and contractors New Line Structures, Inc. to “reinvent the interiors” (as described by CEO Daniel E. Straus) of six brownstones on Madison Avenue, along with No. 31 and its neighbor, the 33-foot wide Grosvenor Atterbury-designed mansion at No. 33.

Completed in 2015, the project called 33 East 74th Street was no nursing home.  As renovations were underway on November 2, 2013, The New York Times journalist Alison Gregor explained “Demolishing all the brownstone interiors enabled Mr. Straus to create the layouts that he believes will best appeal to his target buyers.”  Those target buyers could expect to pay from $14 million to more than $30 million for the three- to five-bedroom condo units.

Externally, No. 31 with its replacement stoop looks little changed, other than a cleaning-up and replacement windows.  But it is a stage set.  Behind the veneer nothing remains of the house C. H. Styles could not sell and which William Hall fancied up 20 years later.