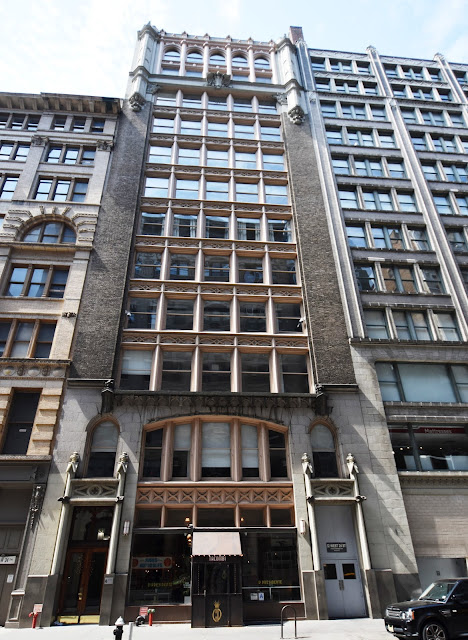 In 1910 the block of 24th Street just west of Madison Square had seen three major transformations.  A fashionable residential neighborhood in the first decades of the 19th century, it had declined by the 1880s as part of the notorious, crime-ridden Tenderloin District.  And now its old low-rise buildings were being replaced with modern loft structures as the block was engulfed by the Mercantile District.

The five-story brownstone-fronted house at No. 32 West 24th Street was once the home of George Washington Kip (whose family name survives in the Kips Bay neighborhood).  Its neighbor at No. 30 had been converted in 1894 for The Pen and Brush club; a group of professional women writers and artists.  The end of the line for both vintage houses was near.

On New Year’s Day 1910 the Real Estate Record & Builders’ Guide reported that architects Frederick C. Browne and Randolph H. Almiroty had formed a partnership, Browne & Almiroty.  It noted “Mr. Browne has had a large practice in loft and office buildings…Mr. Almiroty has been for many years with John H. Duncan, the architect of Grant’s Tomb, and has been identified with many of New York’s finest private residence and business buildings.”

Possibly their first commission involved replacing the old brownstone houses at Nos. 30 and 32 West 24th Street. On March 29 the Marmac Construction Co. purchased the buildings from Mrs. Ruth Livingston and announced intentions to erect “a 12-story mercantile building on the site.”

Construction was completed in January 1911.  The neo-Gothic style had grown in favor for commercial buildings within the past few years and would culminate in 1913 with Cass Gilbert’s Woolworth Building.  Browne & Almiroty turned to the style for Nos. 30-32 West 24th Street, using limestone, brick and terra cotta to create an impressive yet utilitarian structure.

Marmac Construction immediately leased the store to the Mosaic Tile Company, while the upper floors filled with apparel manufacturers.  Marmac was not interested in being a landlord, however, and in January 1912 sold the new building to Chicago investor Jacques L. Boisse.

Among the tenants in the building in 1913 were Schutzer, Dessau & Luchs, manufacturers of “cloaks and suits.”  The firm employed 20 men and two women.  Also here was Gill & Renther, which made dresses.  Its employees included 10 men, 10 women, and two “children” between 14 and 16 years old.

The firms shared the building with large “costumes and lingerie” manufacturer George, Henry & Rosenbaum Co.  The company employed a workforce of 95—12 men and 83 women.

The Review added “They are showing their Spring and Summer models in their new quarters, which are very splendidly appointed, both as to factory facilities and equipment, and the well arranged showroom.” 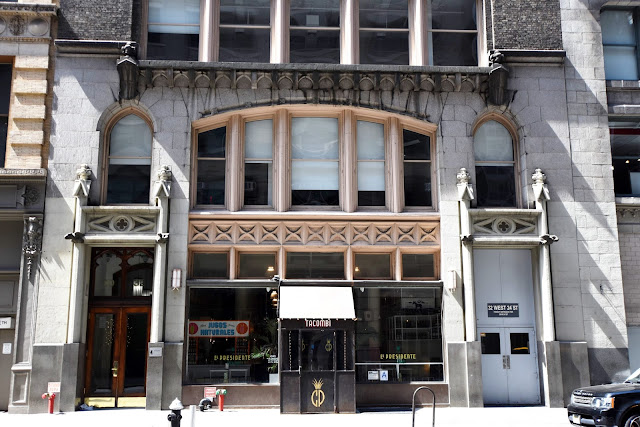 Another new tenant that year was The Victoria Undergarment Company, Inc.  In reporting the move, The Corset and Underwear Review said the “manufacturers of nightgowns and envelope chemises, have joined the uptown movement.”

Although garment manufacturers like the Kirschner-Hendler underwear company continued to sign leases into the 1920s; the apparel district was moving northward.  A new type of tenant was emerging, like Albert Guggenheim, importer of olive oil.   Guggenheim was embarrassed when his name appeared in local newspapers upon his return from Europe in May 1928.

Guggenheim had traveled home in a first class cabinet on the Cunard liner Aquitania.  While liquor flowed freely in Paris, London and Rome, such was not the case in Prohibition Era New York.  And when Customs agents searched Guggenheim’s baggage at the New York pier they found three quarts of liquor concealed there.  Certainly to Guggenheim’s dismay, the officials smashed the bottles.  He was fined $15.

In 1933 Morris & Bendien, Inc. was in the building selling wholesale novelties.  That year it offered 60 assorted jigsaw puzzles for $3.00; “each picture a masterpiece.”

As 1933 drew to an end so did Prohibition.  Albert Guggenheim saw more potential profits in liquor than in olive oil and formed the Kienzler Distilling Corporation on December 17, with himself as president.   Even before the corporation was official, Guggenheim was wasted no time.  On December 4, the day before Prohibition was abolished, the Government auctioned “Scotch, rye, champagne, and cordials now resting in cases, bags and demijohns at the army base in South Brooklyn,” according to The New York Times.  The liquor had been “seized by the government during the last few months of prohibition” from steamers arriving in New York Harbor.

While United States Marshal Raymond J. Mulligan received “half a dozen bids for the liquor,” he dismissed all but two.  One of those came from Kienzler & Co., which bid $19 a case and $7.50 per gallon.

The following year Kienzler & Co. applied for a trademark for its own whiskey and gin.   Perhaps Albert Guggenheim should have stayed in the olive oil importing business.  Not quite four years after he started Kienzler & Co., the firm declared bankruptcy on October 25, 1937.

Like Morris & Bendien, the Elka Toy & Novelty Mfg. Corp. hawked cheap novelties here by 1951.  Among its carnival-type items were “adorable fur kittens and dogs” which it advertised as “made entirely of ‘Ball of Fluff’ genuine rabbit fur.”

By 1958 Nos. 30-32 West 24th Street was known as “The Army Reserve Building.”  It was here on September 18 that the Interstate Commerce Commission began an inquiry as to the cause of a Jersey Central commuter train’s plunge into Newark Bay, killing 50 passengers.

The building was also used for the Federation Employment and Guidance Service’s “sheltered workshop.”  Here, under the auspices of the Vocational Rehabilitation Program, the Government provided “light factory work” for unemployed disabled job seekers.  Manufacturers were encouraged to use the workshops for simple piece work, like the assembly of costume jewelry.

Today a café occupies the ground floor where mosaic floor tiles were sold in 1911 and the upper stories continue to be home to light manufacturing and office space.  Although the service entrance at No. 32 has been butchered; the neo-Gothic detail at No. 30 survives.