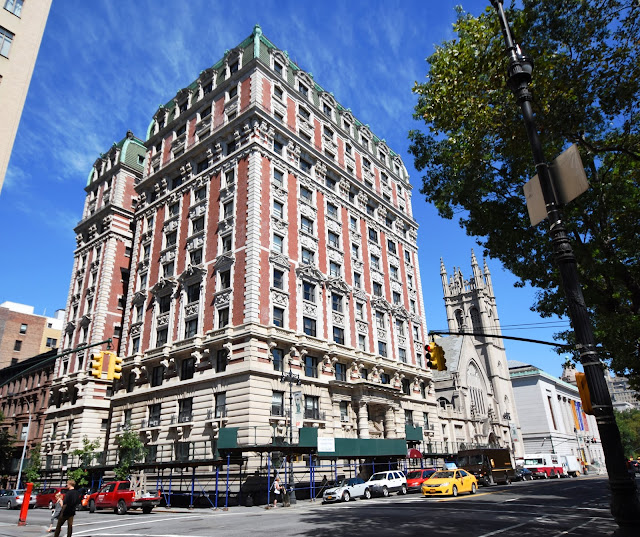 Unlike the mansion-lined Fifth Avenue directly across the park, Central Park West saw the rise of substantial apartment buildings rather than private homes in the last decades of the 19th century.  It was a trend set by Edward S. Clark’s Dakota Flats, completed in 1884.  In 1906 developers Saxe & Coon, operating under the title of the Lenox Realty Company, laid plans for one more, on the northwest corner of 75th Street.

At the time apartment living had earned acceptance among the upper classes.  But those residents expected accommodations equal to those of an upscale private home.  Saxe & Coon turned to the architectural firm of Townsend, Steinel & Haskell to design what the Record & Guide would call “a 12-story high-class elevator apartment house.”

The contractor, Jacob a Zimmerman, was given the construction contract in May 1906.  The building costs were projected to reach $1 million—more than 27 times that much in 2016 terms.  While East Side apartment buildings were known only by their addresses; it was already Upper West Side tradition to name them.  This would be called the “Kenilworth.”

Completed in 1908, the Kenilworth carried out the Parisian theme of Broadway set by lavish apartment buildings like the Ansonia and the Dorilton.  Two stories of rusticated limestone supported eight floors of red brick trimmed in lavishly-carved limestone.  The Beaux Arts confection rose to a copper-trimmed mansard roof.  The French ornamentation—spandrel panels with classical swags, stone balustrades and robust pediments—culminated in the impressive two-story portico.  Here complex banded columns upheld the entablature which announced the building’s name.

The World’s New York Apartment House Album noted “The rooms throughout are of unusual size, and the finish equal to that of any high-class private dwelling.  Each suite is provided with reception hall, connecting to parlor, library and dining room.”

There were just three sprawling apartments per floor.  Because the low-rise Church of the Divine Paternity occupied the rest of the block, the Kenilworth received sunlight on all sides.  The World’s New York Apartment House Album noted “A special feature of the ‘Kenilworth’ is that every apartment is equal to a corner, due to its surroundings.”

Saxe & Coon had anticipated the demands of their wealthy residents.  Each apartment had three bathrooms, and “telephone and mail service” were provided.  The New York Times pointed out on August 2, 1908 “fire-proof safes with combination locks are built in the walls of all the principal chambers.”

As the Kenilworth was under construction, the wildly-popular actor and playwright, George M. Cohan was experiencing marital strife.  Married to Ethel Levey since 1899, he took notice of one of the showgirls, Agnes Nolan, who was a member of one of his musical comedy companies.  George and Ethel were divorced early in 1907 and a few months later, on June 29, the actor married Agnes Nolan.

The couple was now among the first residents of the Kenilworth.  And on September 15, 1910 newspapers announced that a daughter had been born in their apartment the afternoon before.

Another early resident was genealogist and author George Austin Morrison and his family.  Among his works were biographies of Captain Kid and Lafayette, and the History of Saint Andrew’s Society of the State of New York.  His wife was the former Magdalen S. Morrison.  Despite their prominence, it was the Morrisons’ daughter-in-law who was more socially visible.

The confusing schedules of socialites necessitated their announcing when they would be “at home” to receive visitors.  On January 4, 1914 The New York Times society column noted “Mrs. George A. Morrison, Jr….will be at home the four Sunday afternoons of this month after 5 o’clock and the four Tuesday afternoons after 4.”

George Austin Morrison died at the age of 83 on February 26, 1916.  His funeral was held in the Kenilworth apartment three days later.  Morrison’s will directed that his valuable collection of “books, notes, original manuscripts and pedigree charts” go to the New York Genealogical and Biographical Society. 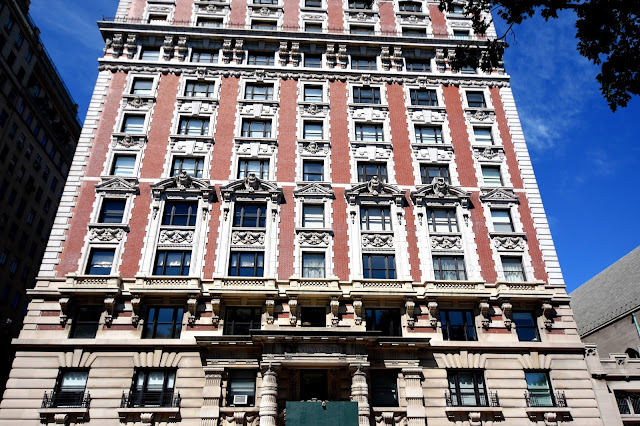 In 1920 vacant apartments in the Kenilworth were advertised at from $4,000 to $6,500 a year.  The highest rent would translate to approximately $6,500 per month in 2016.  The pricey rents were not a problem to Kenilworth residents, as was evidenced in a advertisement in The New York Herald that year:  “LOST—Diamond oblong wrist watch…Liberal reward return to 151 Central Park West apartment 12W.”

Another long-term resident was Mrs. Sanders Gutman.  On December 28, 1919 she announced the engagement of her son, Arthur Sanders Gutman to Marie Troustine.  The couple was married in the St. Regis Hotel on January 9 and, as had been the case with the Morrison family, they moved into the Mrs. Gutman’s apartment.  Her other son, Leopold, and his wife lived nearby at No. 135 Central Park West.

Leopold and his family maintained a country estate at Lake Placid.  Around the beginning of May 1920 the family, including their two daughters 6 and 12 years old traveled to the summer house.  The 63-year old Mrs. Gutman accompanied them.  What had been a normal relaxing summer turned tragic on July 19.

The family was on a sightseeing trip to Montreal.  Along with their chauffeur, John Flack, the large touring car included Gutman relatives Mr. and Mrs. S. Bernstein and Mrs. De Witt Milhouser.  Something went horribly wrong and the large automobile plunged off a bridge.  Only the chauffeur and Mrs. Bernstein survived.

Just before the Gutmans left New York that year, the Kenilworth tenants formed The Kenilworth Associates, Inc. “for the purpose of taking title to the property and to manage it on the co-operative basis.”  The residents paid $1.25 million for the building.
Many of the Kenilworth’s residents made their living in the arts.  Poet May Riley Smith was here until her death in 1927.  Her husband, bridge engineer Albert Smith, died in 1919.  At the same time Fox Film executive Louis S. Levin was here.  He brought unwanted publicity to himself and the building when he was arrested in January 1929 for breaking into the home of Douglas N. Tauszig, the son-in-law of William Fox, with three other men.  They were searching for evidence that Tauszig was cheating on his wife.

Living here at the same time was the former operatic prima donna Madame Marcella Sembrich.  Once an international sensation and a major figure in the Metropolitan Opera and Royal Opera House at Covent Garden, she had retired from the stage, but continued coaching “a few selected pupils.”

In the fall of 1930 she was taken ill, but recovered.  A few months later, in December, she was forced to cancel her appointments and her doctor, Charles G. Taylor, told reporters she was “seriously ill.”  The Times reported “Her illness is described as due to gallstones.  She is 72 years old.”

Music lovers were relieved when the former opera star rallied.  She lived on in her Kenilworth apartment for another five years, dying there after a two-month illness on Friday morning, January 11, 1935.  Two days later The New York Times announced “A simple funeral service for Mme. Marcella Sembrich, the famous opera star, will be held this afternoon in St. Patrick’s Cathedral.”

While the wealthy residents of the Kenilworth seemed, to outsiders, to be little affected by the Great Depression; problems were developing.  On June 2, 1936 the Metropolitan Life Insurance Co. foreclosed on the cooperative, noting that there were unpaid taxes of $35,000 and an outstanding mortgage of $780,000.  The Kenilworth was once again a rental property.  It was purchased by real estate operator Max N. Natanson five years later.

By the time the United States entered World War II the family of Irving Sarnoff was living in the building.  A radio pioneer, The Times would later say of him “One of the first to foresee the expansion of the radio industry, Mr. Sarnoff entered the field in 1925, when the medium was still in its infancy.”

By now Sarnoff was a principal in Bruno-New York, Inc. a distributor of the R.C.A. Victor radios and television sets and of Whirlpool appliances.  His brother, David Sarnoff, would become internationally known as the Chairman of the Radio Corporation of America and achieve the rank of Brigadier General.

But in 1944 David Sarnoff was still a colonel, serving with the US Army Signal Corps in Britain.  Arthur Sarnoff was 13 years old that year when he sent a letter to his soldier uncle on May 4.  He ended it with “Give my regards to Churchill.”

Shortly after receiving the letter, David Sarnoff was invited to an intimate lunch at the home of a friend.  Also there were Prime Minister Churchill and Mrs. Churchill.  After lunch, Sarnoff was smoking a cigar with Churchill and, on a whim, pulled Arthur’s letter from his jacket pocket.

On Thursday, July 13 a letter from Britain addressed to Arthur Sarnoff arrived at the Kenilworth.  “Uncle Dave” related to Arthur how he had shown Churchill his letter.

“While he was reading it I was trying to get up enough courage to ask him to autograph it for you.  But when he had finished he asked me, ‘May I wrote on the young man’s letter and thank him?’”

David Sarnoff had returned Arthur’s letter.  On the last page “with his own pen” the Prime Minister had written “Thank you so much” and signed it “Winston S. Churchill.”  Irving Sarnoff locked the document in his safe deposit vault (David had suggested that, saying that when Arthur was grown, he would possess “evidence of a contact which you made with one of the greatest men in history.”

On September 16, 1946 Paula Ruth Sarnoff was married in the Crystal Garden of the Ritz Carlton to David Irving Oreck.  As was the case with so many Kenilworth families, the newlyweds moved in.  In 1951 the Oreck’s first son was born; and in 1953 another arrived.

In 1958 the Kenilworth was converted to co-operative apartments once again.  This time the plan survived.

On March 19, 1961 Irving Sarnoff died at Roosevelt Hospital at the age of 60.  His wife, Minnie, remained in the Kenilworth where now not only Paula and her family lived, but so did Arthur and his wife.  In November 1963 the couple welcomed a daughter.

Throughout the decades the Kenilworth continued to be home to celebrities and prominent professionals.  For many years actor Basil Rathbone lived here, as did Michael and Diandra Douglas, Ashton Hawkins and Bill Moyers. 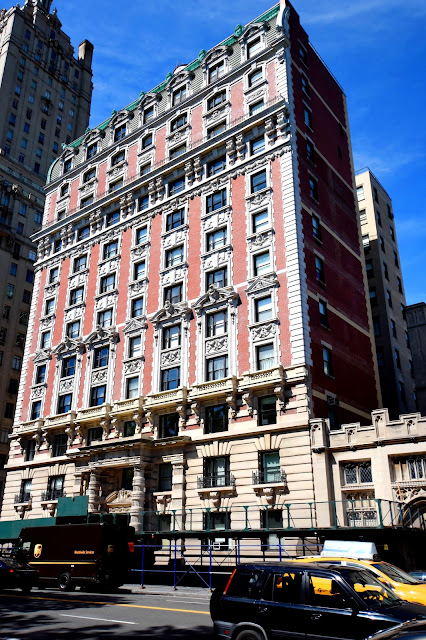 The exuberant façade survives virtually intact since 1908.  There are still just three apartments per floor, commanding prices of up to $17.5 million in 2016.