In the first decades of the 19th century the Leonard Street block between Hudson and Varick Streets was lined with respectable brick-faced homes.  The Gilbert family had lived at No. 17 Leonard Street for years.   Thomas and Alice Gilbert had two sons, Thomas and Edmund.  When Alice, now a widow, died in the house at the age of 79 on Wednesday, October 11, 1843, Edmund remained in the family home.

Referring to Thomas and Edmund following Alice's death, The New York Herald said “the bulk of a large fortune has thus recently fallen to their share.”  The wide-spread knowledge that Edmund had come into an inheritance led to a terrifying ordeal a few months later.

At around 10:00 on the evening of Saturday, March 3, 1844 Edmund was sitting in one of the parlors at No. 17 Leonard Street when suddenly two men rushed in, demanding money.  When he said he had none, “the ruffians threw him upon the floor and placed a pillow over his face to prevent him from making an alarm, and immediately forced a rope into his mouth and attempted to gag him, and then tied his hands and legs," reported the Herald.

Edmund gave the men “two sovereigns and some small change” from his pocket—not enough to satisfy the thieves.  He directed them to a table in the basement where he said they would find $150 (a much more gratifying $5,000 in 2016 dollars).  They did not find the cash; but stole a few silver spoons before being frightened off.   What the burglars did not know was that just a few days previously the Gilbert brothers had turned over the bulk of their inherited money to a manager.

The break-in was a hint at the change that was taking place on Leonard Street as wealthy families were inching northward ahead of the tide of the commercial district.   Within a few years Edmund Gilbert had joined the trend and the old residence was operated as a rooming house.  Ann Freeman lived here in 1854 with her husband.  Her desperate circumstances became even more strained after she tried to do a good deed.

On June 30 The New York Herald reported “About six weeks ago a young mulatto woman, seemingly about 16 or 17 years of age, called on another colored woman, named Ann Freeman, 17 Leonard street, to take care of her child for a few house.  Mrs. Freeman, supposing she was one of her neighbors, took charge of the child.”

The mysterious teen was not a neighbor and never returned.  Ann Freeman found herself taxed with caring for an infant she could not afford.   On Wednesday night, June 28, the nine-month old baby died.  The Coroner deemed the death due to marasmus, or starvation.

Within a year the old Gilbert house was demolished as the Knickerbocker Ice Co. laid plans for a stable for its ice wagons.  Completed in 1856, the brick-clad structure stood three stories tall.  Interestingly, it appears that the structure was always designed with residential space above the stable.

The headquarters of the Knickerbocker Ice Company was at No. 432 Canal Street.  The New York Times, in 1863, described the firm as “the largest Ice Company in this City, and carries on a most extensive business at home and abroad.  Considerable quantities of ice are annually shipped from this house.”

The neighborhood around the Knickerbocker Ice stables was becoming the center of the Produce District.  When the building did not sell, the firm edited its advertisement to reflect the area's new personality.  On June 15, 1873 an ad appeared in The New York Herald that read “Valuable Lot, in Rapidly Improving Neighborhood, with three story Building, 17 Leonard street, will be sold low, on easy terms.  Apply to Ice Company, 432 Canal Street.”

After three years of trying, the Knickerbocker Ice Company finally sold No. 17 Leonard Street in June 1875.  The buyer, Horace K. Thurber, who owned the H. K. Thurber & Co., paid $20,000 for the building.

As the Knickerbocker Ice Company had done, Thurber & Co. leased the upper residential rooms.  The impoverished tenants led difficult lives.  On February 15, 1882 The New York Times published a one-sentence article weighed down by tragedy.  “Joseph J. Bradley, aged 14 months, was accidentally drowned last night in a wash-kettle at No. 17 Leonard-street.”  Also living here at the time was Thomas Redmond, whose occupation was listed as “clerk.”

On June 27, 1887 Horace K. Thurber sold the property to John Campbell for $25,000.  New ownership changed nothing on the upper floors, which were occupied mostly by Irish immigrants.

One of them, John Gallagher, was an avid boxing fan.  He was a member of the Greenwich Athletic Club, as was Martin Kendrigan.  On the afternoon of February 19, 1893 the two men were talking about two popular fighters, “Gentleman Jim” Corbett and Charlie Mitchell, the champion of England.  Unfortunately the two were on opposite sides of the discussion.

The Evening World reported the following day “Kendrigan championed Corbett and waxed warm when Gallagher said he was ‘a stuff.’”

Indeed, Kendrigan waxed warm enough to blurt out “I’ll show you how Corbett’ll fix Mitchell” before landing a blow on Gallagher’s face, breaking his jaw.  “Gallagher went down and out,” said The Evening World.  His broken jaw was mended at the Chambers Street Hospital and he went home to Leonard Street.

Agnes Timmins lived here around the same time with her 17-year old son James.  She took him along on the winter night of February 4, 1894 to visit her friend, Mrs. O’Brien at No. 214 Greenwich Street.  Just after midnight they left the O’Brien apartment heading home.  But at the second landing Agnes’s slipper caught in the carpeting and the 46-year old woman fell headlong down two flights of stairs.  When James reached her she was unresponsive.  He ran to the street and found Policeman McGinnis.

The Evening World reported the next day “Dr. Taylor found that the woman’s neck was broken.  She was dead.”

Michael Powers and his wife were living on the top floor that year.  The 30-year old was a “laborer” and fond of drink.  Early on the evening of July 1, 1894, according to The Sun, he “drank an enormous quantity of whiskey.”  His erratic behavior terrified his wife.

“At 7:25 o’clock last night Powers’s wife roused the neighborhood by screaming wildly.  At that instant Powers yelled, ‘Take them away,’ and sprang out of the rear window of the tenement.”

Next door was the Leonard Street Police Station and rather than falling three floors to his death; Powers landed on the roof of that building’s extension.  Inside the Section Room of the station house policemen were watching a doctor dress the wounds of a stabbing victim.  Suddenly Powers crashed through the skylight.  The Sun reported “He was unhurt by his second jump, too, and he came dancing into the section room.”

Delusional and intoxicated, he swore “Two men are after me.”  Mrs. Powers entered the station house, crying, as the police took control of her husband.  The ambulance surgeons who responded said that “Powers had a bad attack of delirium tremens.”

Suicide was a crime in the 19th century and Powers was held at Bellevue Hospital for attempted suicide.  The newspaper noted “His wife begged hard, but unsuccessfully, for his release, saying that he wouldn’t have jumped out of the window but for his excessive drinking.”

Another tenant arrested that year was Edward Sullivan.  The 28-year old was charged with election fraud.   He offered down-and-out men $10 for falsely registering and “$7 for each and every vote they would cast on Election Day under the false names.”

Within the decade the renters above the stable would be gone.  In December 1904 the Police Department began “alterations and repairs” on the building after renting it for use by the Leonard Street Station House.   The City agreed to pay $1,200 a year rent on the building; equal to about $2,700 per month in 2016.

In June 1918 the police department sold the aging Leonard Street Station House to the Standard Rice Company.  Then, in March 1920, the firm purchased “the three story stable” next door.  Standard Rice did not keep the old brick building long, selling it in October 1922 to Frank A. Harrington.

The new owner quickly commissioned architect Samuel Rosenblum to do $1,000 in renovations, including a “new runway.”  Harrington originally operated the building as a livery stable.  But before long it would have a far different purpose.

By 1932 Prohibition agents had developed a keen eye—and nose—for detecting liquor-making operations.  For weeks in December that year an odor of molasses had been noticed coming from the stable building.  On January 10, 1933 Martin O. Hanson and six other agents battered down the door.

As they broke partially through, it was not the sweet odor of molasses that met them, but a suffocating stink.  Hanson covered his face with a handkerchief and shouted to his crew “Gas bombs!  They are trying to poison us with gas!”

When they finally gained entrance, there was only one man in the building, James Macci, who was stupefied by the fumes from an overturned 15-gallon container of sulfuric acid.  Macci was taken away, charged with possessing and manufacturing liquor.

The acid fumes had been a plot to give the other bootleggers a chance to escape through the back.  The agents were dumbfounded at what they had happened upon—what they described as “the largest distillery uncovered in this area in the last year.”  The building had been converted to a three-story liquor factory.

In 1937 Dominick Matera, a paper scrap dealer, purchased the building and announced plans to “make extensive improvements and occupy the premises.”  The Liberty Paper Company was still here in the 1950s.

The Tribeca neighborhood experienced a rebirth in the late 20th century; but No. 17 Leonard Street did not.  In the period between 1998 and 2013 the building’s owner, Christopher Rolf, had been fined nearly $40,000 for violations related to the dilapidated structure.   In December 2013, while Rolf was asking $15.7 million for the property, the Department of Buildings evacuated it; the Real Deal noting it was “teetering on collapse.” 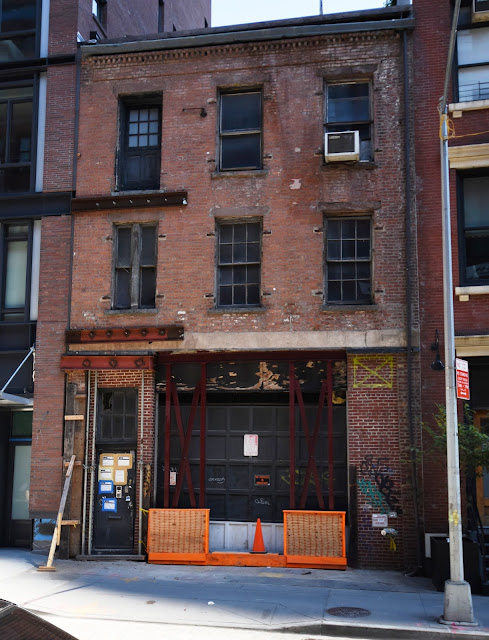 Finally, in January 2015 the building sold for $11.2 million.  The entrance is slathered with work permits in 2016 as Tribeca waits to discover the fate of the tiny 160-year old building.