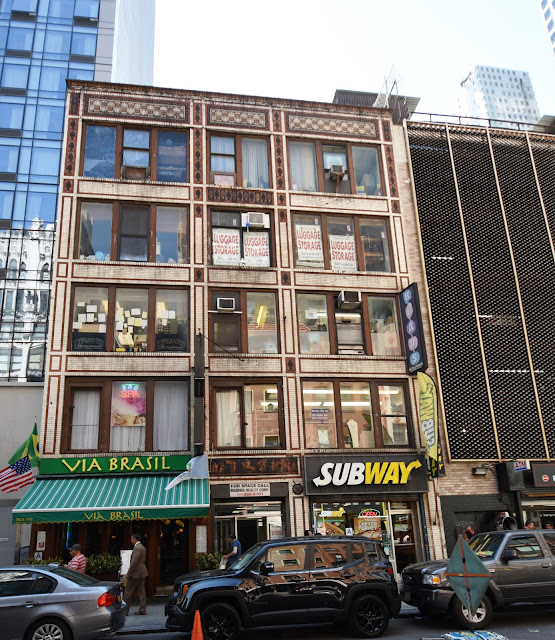 On April 19, 1912 The Denver Post received a telegram from New York City.   Its readers were frantic about the fate of socialite Mrs. James M. Brown, known popularly as Molly Brown, who was known to have been on the RMS Titanic.  The message read:  “Tell my Denver friends I’m safe.  Tell them I’m crazy with grief, but that it isn’t my own grief, for my daughter Helen is safe in Paris, thank God!”

The newspaper wrote “These were the first words that came from the brave little woman to the outside world that was clamoring for news of the Titanic’s dead.”

Mrs. Genevieve Spinner had rushed downtown from her home at No. 36 West 46th Street as the Carpathia steamed into New York Harbor.  A close friend of Molly Brown, The Denver Post said she “pleaded with her to leave the ship and not stay on it over night.  Mrs. Spinner was hysterical.”

Margaret Brown refused to listen to Genevieve Spinner’s entreaties.  She said that from the minute she had been brought onto the Carpathia until now, she had helped nurse the sick and dying “and would continue to do so until she dropped.”  The unspeakable horrors she had witnessed made her resolute to do whatever she could to prevent further death.

“How can you expect me to leave these suffering people when my own life has been spared?  Tomorrow morning I’ll leave—and not before.  Oh, if you only knew—and I can’t tell you about it.  It is beyond my power of speech.”

The house where Genevieve Spinner lived and where, apparently, the unsinkable Molly Brown was a guest the following morning was a four-story, high stoop rowhouse just west of Fifth Avenue.  Its neighborhood, once the most fashionable in Manhattan, had seen the encroachment of commerce for more than a decade.  Within months Genevieve and her neighbors would be gone.

The Spinnner house and its identical next door neighbor at No. 34 were purchased by Robert Pendleton Bowler.  Internally combined, they were converted for commercial purposes.  The stoops were removed and the entrances moved to street level, creating what was now described as a five-story structure.  But the operator quickly laid plans to update the old residences.

On January 31, 1914 the Real Estate Record & Builders’ Guide reported that he had hired his relative, Robert B. Bowler, to renovate the old houses.  That week he had filed plans “for changing the 5-story brick factory building…for store, offices and studios.”  The renovations were projected to cost $25,000 (just over $610,000 in 2016 dollars).

When the renovations were completed in the fall of 1914 no trace of the old homes remained.  Although not formerly trained as an architect, Robert B. Bowler had created an especially eye-catching building that included elements of the Arts and Crafts style while anticipating modern 20th century architecture with crisp lines and expanses of glass.

Bowler’s white brick façade, with piers and spandrels outlined in starkly contrasting reddish-brown, was punctuated by terra cotta tiles with stylized black palmettes.  The motif expanded below the fifth floor where designs crowded the central spandrel panel; and then exploded above with chubby palmettes alternatingly pointing upward and down, fanlike.

On October 25, 1914 The New York Times said the new building was “worthy of attention” and noted that a “maximum of glass front has been provided for every floor.”  But with war spreading throughout Europe, the journalist was not quite decided about the classical bas relief above the doorway. 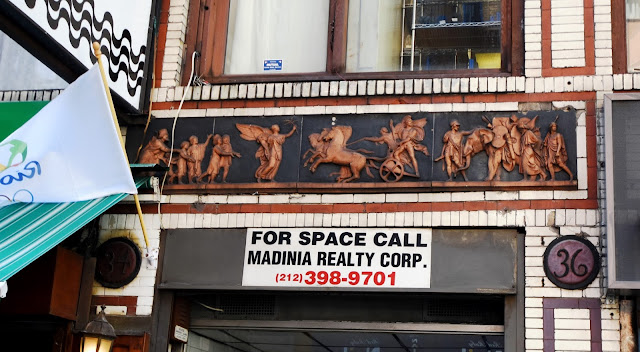 “Over the main entrance of glass front is a terra cotta bas-relief of a Grecian chariot scene.  There is something warlike in it, but Stephen H. Tyng, the agent, said it was perfectly neutral, and no possible exaggeration could possibly connect any of the martial figures with the costumes of the present day in the foreign war zone.”

William Hepner took the western store.  He was the owner of the William Hepner Wig Company.  When Grace O’Hara leased half of the second floor in July 1916, it was clear that the real estate community remembered the building’s roots.  Agents Harris & Vaughan reported that she took “the easterly parlor floor.”

The building continued to house upscale commercial tenants, appropriate to the block which local shopkeepers, according to The Times, deemed “a little superior in exclusive trade facilities and artistic building treatment to the adjacent side streets.”  In July 1919 Isidore Goldstone took half of the second floor.  A merchant tailor, he would have catered to Manhattan’s wealthy businessmen.

But West 46th Street eventually lost its reputation as the most exclusive shopping block.  In 1946 Record Dealers Supply, Inc., a record distributor, operated from an upstairs space; and by 1955 The National Noise Abatement Council was here.

That year the Council offered a free booklet “Home Noise and What to Do About it.”  The Times explained “It tells how to give a party without enraging the neighbors.  How to curb noise in such trouble spots as the kitchen and the bathroom also is discussed.  Advice likewise is given in regard to annoying sounds from household equipment and from the street.”  The Council would remain in the building for several years. 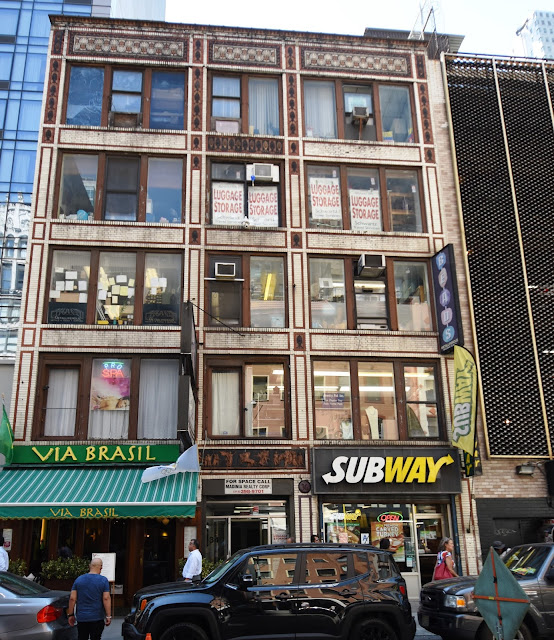 Through some miracle Robert B. Bowler’s highly-unusual façade survives nearly intact.  While the store fronts and main entrance have been modernized; the remarkable terra cotta bas relief survives as do the wonderful terra cotta address plaques.

non-credited photographs by the author
Posted by Tom Miller at 3:02 AM