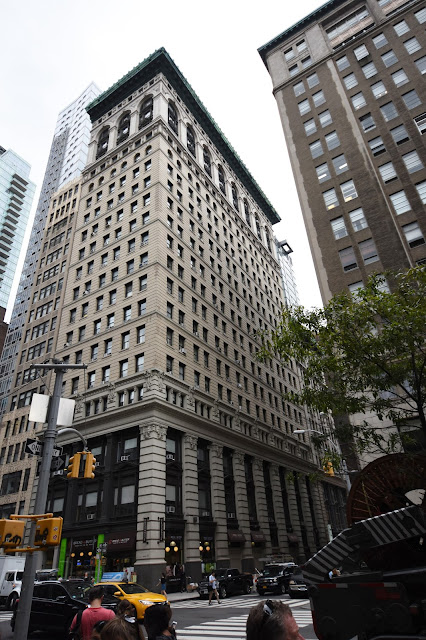 On July 11, 1909 the New-York Tribune noted “There has been considerable activity this year the central Fifth avenue district, which forms the highest class retail shopping zone within the borders of the greater city.”  Among the deals the article mentioned was the northeast corner of Fifth Avenue and 31st Street—Nos. 303 and 305—to “a new syndicate which will improve the site with a twenty story mercantile structure.”

At the time of the transaction The New York Times reported “The land…figures in the deal at about $1,250,000, and the whole project will involve in the neighborhood of $2,500,000.”  The identity of the new owner, Henry Corn, was kept secret for months.  The prolific developer was already highly responsible for the changing face of Fifth Avenue from a residential to commercial district.

Corn routinely used the talents of architects Maynicke & Franke for his tall loft buildings.  But, possibly because that firm was currently working on several other projects for Corn, he chose Buchman & Fox for Nos. 303-305 Fifth Avenue.   In fact, it made little difference.  The building, completed in 1910, followed the typical pattern of high-rise buildings—a three-story rusticated base embracing cast iron shop fronts and upper windows; a scantly-decorated central portion; and a lavish upper section of, in this case, arched openings, carvings, and an elaborate copper cornice.  It was remarkably similar to the Rock Building, on the northern corner of the block, recently completed by Maynicke & Franke for Henry Corn.

The building filled with a variety of tenants.  Maison Edouard called itself “The Exclusive Fifth Avenue Mail-Order House.”  Through its catalogues women across the country could choose among waists, skirts, dresses, suits, and furs.  The term “exclusive” was well chosen.  In 1911 a mail-order suit could cost the shopper up to $42.75—a price tag of $1,100 in 2016 terms.

Another of the initial tenants was Rosenberg Brothers, importers of dresses and millinery goods.  The brothers were in hot water with the Government when they were found guilty for duty fraud in July 1911.   When Hugo Rosenberg was given a fine of $25,000, the United States District Attorney made “a strong and earnest plea for a jail sentence,” according to The Evening World.  But Judge Archibald said his hands were tied, since a few days earlier he had imposed the same judgment on Hugo’s brother and he “must be consistent.”

With several garment manufacturing firms moving in, Nos. 303-305 Fifth Avenue drew the attention of the Joint Board of Sanitary Control.  In 1911 it issued a formal complaint with the City.  Director Dr. George M. Price explained “This is a building twenty stories high not of fire proof construction, with absolutely no fire escapes, and one of its stairways a winding one.  There are three floors occupied by garment-making shops.”

But, despite the horrific tragedy of the Triangle Shirtwaist Factory that same year, the Board’s reports went unanswered.  Three years later, Price told The New York Times “We have entered our complaint, based upon a careful inspection, again and again, and the Fire Department has not lifted a finger.”

In the meantime, the building’s most high-profile tenant was F. A. O. Schwartz which took the retail space.  Founded by German immigrant Frederick August Otto in 1862, the toy retailer moved here from its long-time store on Union Square.  By now the company touted itself as “The largest and most complete Toy Store in the U.S.”

Among the garment shops in the upper floors was Julius Stern & Co., “women’s costumers.”  When one wealthy patroness purchased two gowns in February 1912, the firm sent 17-year old Philip Rosenberg to her Park Avenue address with the packages.  Rosenberg was employed as a messenger boy by the American District Telegraph.

Rosenberg took the Lexington Avenue street car to 38th Street; then headed towards Park Avenue.  It was about 7:00 and dark, and the street lamp on Lexington between 37th and 38th Streets was out.  Half way up the block the teen was pounced upon by three men.  The New York Times reported “One of them caught his throat, another batted his face and head with his fists, and the third man wrested the two parcels from his hands.”  When he walked into the East 35th Street police station he was crying, “his face and head bruised.”

The robbers had made off with the gowns valued at a total of $6,000 in today’s dollars.

In 1913 real estate men may have been shocked to read that the Guaranty Trust Company had begun foreclosure proceedings against “another property with which Henry Corn’s name has been associated,” according to the Real Estate Record & Builders’ Guide.  Corn’s company, the Fifth Avenue Investing & Improvement Company owed $1.45 million on the property.

A syndicate headed by Campbell Carrington purchased the building for $2.1 million.  It quickly traded the property the following year to British physician William A. Bell’s Philips Manor Company for the recently-built community in Westchester, New York.
At the time of the swap, there was a broad variety of tenants in the building.  Among them were the Electrolytic Art Metal Company, which made glass-and-silver table ware; the Clinger Belt Company; and the somewhat surprising Wilson Distilling Company.   Wilson, whose distillery was in Baltimore, produced “Wilson” whiskey, “El-Bart” dry gin, and “El-Bart” orange bitters.  The liquor dealers would remain in the building until Prohibition put an end to their business.

Earlier that year a meeting had been held in the building regarding “the evils of the fur trade.”  The topic was far different than 21st century readers would expect.  The offices of the Associated Fur Manufacturers were the scene of the debate.  “The crying evil in the local fur industry,” it was said, “was the ease with which credit can be obtained” by small manufacturers.  The seasonal business then caused many of those firms to fail.

With war raging in Europe, the American Defense Society opened its national publicity headquarters in the building on August 4, 1915.  The group announced that is was "the announced enemy of those peace organizations who urge disarmament, and so by their program of non-resistance invite an invasion of American rights an American territory.  It is also the announced enemy of all those politicians, either in office or out of office, who put self and party above the protection of the men, women and children of America.”

And the Suffrage Party remained here until women finally earned the right to vote in 1919.  The group’s full-page advertisements over the years appealed to male emotions and simple logic.  One, in November 1917, began “When you go to the polls next Tuesday, think about just three women—your mother, your wife and your daughter.”  The ad went on to remind men that when they had had a serious decision in their lives, “your first job, or about your troubles at the office, or a new opportunity in business,” they went to their mothers for advice.

And if they relied on those women for sage advice in those instances, “Wouldn’t you trust her to make a sound decision on anything that affects your lives?”

Other tenants at the time included the Manhattan Press Clipping Bureau, the Harper Oriphone Co., which made “instruments for the deaf,” and the Bijou Dress Company, run by the Krohnberg brothers.  A few years later Louis Krohnberg’s love of card playing would land him in the courts.

On December 16, 1920 The New York Herald reported “Because of his uncanny habit in winning at stud poker on the last card turned, Krohnberg became known as ‘Last Card Louis.”  The dress maker’s luck ran out when he attended a card party at the home of motion picture producer Joseph M. Schenck, husband of screen star Norma Talmadge.   Also playing that night was Lewis J. Selznick, whose son, David O. Selznick would make Hollywood history.

The game broke up when one player accused Krohnberg of cheating by using a marked deck.  The New York Herald said “Krohnberg is said to have been beaten up and ejected.”  That would have been the end of it had not one of the players had him arrested, charged with cheating.  The case drew the attention of the City of New York which investigated the lucky man’s winnings.

A law on the City books penalized gamblers “five times the value of the money won at a poker game or other game of chance.”  The income from the fines would be then turned over to the Overseer of the Poor.  Unfortunately for Krohnberg, his winnings from June 1, 1919 to January 1, 1920 were alleged to total $66,300.  Now the City sued him for $331,500.

Nos. 303-305 Fifth Avenue continued to be home to a variety of tenants.  The Barnes Coal Company’s executive offices were here in 1922; as was the Lisner & Co. importing jewelers (their $2,600 payroll was stolen from an employee in the stairway on December 31, 1921); while the Futurist Company was manufacturing undergarments made of “shimmering silks from the looms of the Orient” as well as knickers for little boys.

Fred Baggs operated his Baggs Glove Company here in the early 1920s.  But he was better known as a tennis player and “clubman.”  His free-wheeling lifestyle got him into hot water with his wife.  She charged him with “misconduct with an unidentified woman” in July 1924.  The sole owner of his company, he claimed his gross income was $40,000 per year—a satisfying $555,000 today.  Cheating on Mary Davidson Baggs cost the tennis player $50 a week in alimony.

A blow to the owners of Nos. 303-305 Fifth Avenue came in October 1930 when its signature tenant, F. A. Schwartz announced it would be moving to the new Squibb Building on Fifth Avenue and 58th Street.  It was evidence that the upscale shopping district had migrated north.

In the 1930s the building became the headquarters of the Arab National League.  Among the goals of the organization was the “return of Palestine land to the Arabs.”

Lisner & Co., the jewelry firm robbed in 1921 was still here in the 1940s.  By now more and more costume jewelers were replacing apparel firms in the building.  Eventually it would earn the nickname The Jewelry Building. 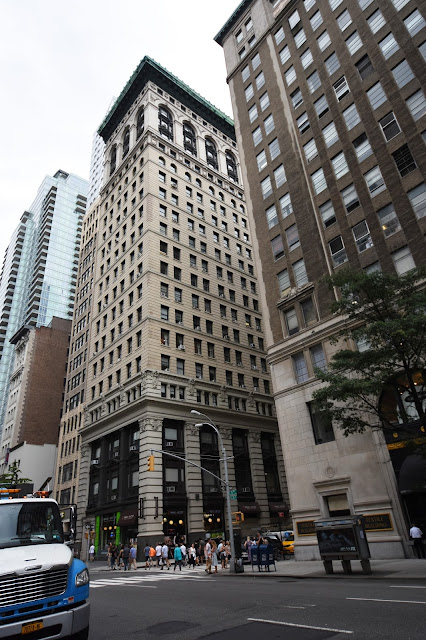 After owning the building for nearly a century, the family of William A. Bell put it on the market in 2009.  A renovation of the lower floors and lobby was initiated that year.   Nos. 303-305 Fifth Avenue and the Rock Building stand on either end of the block like one of a pair of Henry Corn bookends by different architects; both reminders of a transitional period on Fifth Avenue.

photographs by the author
many thanks to reader Eric Stott for suggesting this post
Posted by Tom Miller at 12:10 AM