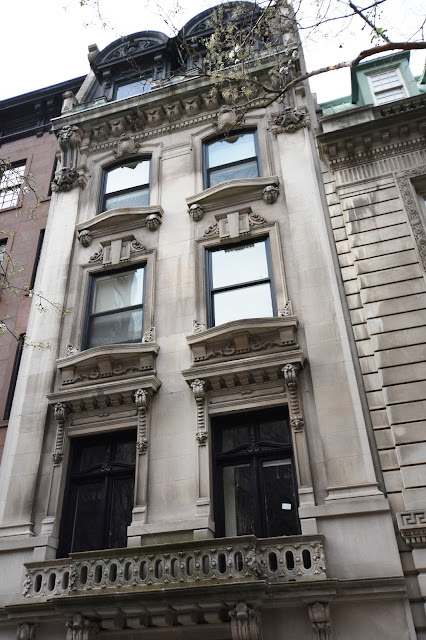 While the architectural partnership of Arthur M. Thom and James W. Wilson would produce some prominent civic structures, among them the 1894 Manhattan Criminal Courts building and the Harlem Courthouse; they were best known for their rows of brownstone-fronted homes.  In 1883 construction began on one such project, on 81st Street between Fifth and Madison Avenues.

The Italianate-style residences were four stories tall above an English basement.  Their identical high stone stoops lined up, creating a regimented residential block similar to scores of others throughout the better neighborhoods of New York.  The houses were commissioned by developer brothers Ambrose and William Parsons and completed in 1884.

Among the row was No. 18.  The Parsons brothers sold it to real estate operator Isaac Phillips, who purchased it as an investment.  He resold it a few months later to Henry Werner and his wife, Sarah.  Born in Prussian, Werner had come to New York when he was 13 years old.  A well-known dealer in hides and leather since 1864, his office was at No. 26 Spruce Street.  The couple had six children and had been living on East 65th Street, near Lexington Avenue until now.

Werner's partner, Simon Strauss, lived in Europe and handled the buying of goods, mostly in Germany and France.  The success of their enterprise was evidenced in 1886 when they reported doing $3 million in business—more in the neighborhood of $78 million in 2016.

The Werners’ stay in their comfortable new home would last just over a decade.   On Sunday May 8, 1898 Henry died in the house at the age of 56 from what The New York Times deemed “a complication of diseases.”  His funeral was held in the parlor at 10:00 a.m. two days later.

The house became home to Charles and Rosine Cahn.  The couple lived quietly on East 71st Street, their names appearing in society pages only to report their arrival each summer in some fashionable Catskills resort hotel.   Six years after Henry Werner’s, the funeral of Rosine Cahn was held in the house on June 30, 1904.

The Cahn residence was only 22 years old when, on November 3, 1906, the Real Estate Record & Guide reported “The 4-story dwelling, 18 East 81st st, is to be remodeled into an American basement.  Possession to the property will not be taken until May 1, 1907.”

While the new owners, Seymour and Ada Strauss, waited for Charles Cahn to vacate, they commissioned the architectural firm of Cleverdon & Putzel to draw up plans for the remodeling.  The architects would strip off the brownstone façade and remove the stoop, allowing them to pull the front wall to the property line.  This provided a significant increase in living space within.

When renovations were completed late in 1907, there was no hint of the former Victorian rowhouse.   The elegant French residence, now clad in white limestone, held its own with the Fifth Avenue mansions around the corner.  Cleverdon & Putzel managed to bring the richness of the Beaux Arts style to the design while resisting the temptation of excess ornamentation. 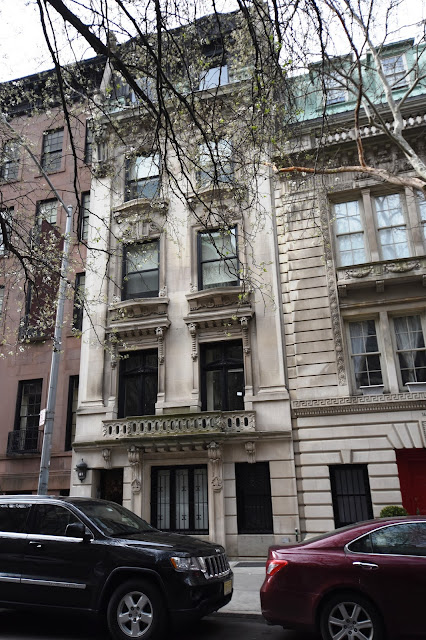 The double-doored entrance was centered between two hefty scrolled console brackets which supported a stone balcony at the parlor level.  Handsome carvings embellished the openings and brackets.  Above the elaborately-carved cornice rose the copper-covered mansard, interrupted by two hefty hooded dormers.

Seymour A. Strauss was associated with the men’s and boys’ clothing manufacturer Heidelberg, Wolff & Co. located at No. 644 Broadway.  The fact that his father-in-law, Isaac N. Heidelberg, was a partner in the firm was, no doubt, not a coincidence.  The Strausses had two daughters, Margaret and Ethel.

Ada Heidelberg Strauss was accustomed to living comfortably.  Her father’s fortune was estimated at just under $1 million.  Marriage had not changed that.  The family maintained a summer estate, called Breezypoint Camp, at Lake Placid.  During the winter season, as was the case with wives of other wealthy businessmen, Ada busied herself with philanthropies and teas while Seymour worked.

In the spring of 1914 Ada Strauss traveled to Berlin to take part in the week-long benefit activities of the American Woman’s Club there.  On April 25 The New York Times reported “Frivolity was announced to be the leit motif of the dansant and cabaret held at the Hotel Adlon this week.”   As a side note, the newspaper mentioned “The town continues to fill up with American tourists, who have found Berlin this week immersed in sunshine and an almost homelike humidity.”

The American visitors, including Ada Strauss, would not be coming back to Berlin for many years.  Two months later the assassination of Archduke Franz Ferdinand triggered the outbreak of war.

International conflict could not stop romance, however; and in May 1917 The American Jewish Chronicle reported that Seymour and Ada had announced the engagement of Margaret Virginia Strauss to Robert I. Plaut.  Within the month the couple was married at the Plaza Hotel and left for a “motor honeymoon” through the Berkshires.

Ethel became engaged in August 1924.  In reporting the event, The Times mentioned, Miss Strauss is spending the Summer with her parents at their country home.

When Ada died in the 81st Street mansion early on the morning of May 1, 1929, Seymour Strauss was left alone with only the company of his domestic staff.   Nevertheless, he remained here another seven years, finally selling it in May 1936 to William Kingsland Macy and his wife, Julia.

Macy, known familiarly as “King,” had been a wholesaler and importer.  But with the outbreak of war he had served with the United States Food Administration and the War Trade Board from 1917 to 1919.  Following the war he was president of the Union Pacific Tea Co.

His wife came from one of New York’s wealthiest and most prominent families.  Julia’s grandfather, William Dick, had made a fortune in sugar refining.    Her brother, William Karl Dick, drew attention to the family name on June 22 1916 when he married Madeleine Astor, the widow of John Jacob Astor IV who was lost in the RMS Titanic disaster.

William Kingsland Macy’s career went in a radically-different direction after moving into the 81st Street house.  He was already involved in politics and had served as a delegate to the Republican National Convention in 1928.  Politics were now becoming his life’s work.

The year the family moved into No. 18, he was an integral part of the investigation of the New York State Banking Department.  In 1931 he was active in promoting the Seabury inquiry regarding the political operations of New York City.

In October 1937 William and Julia announced the engagement of their daughter, Julia Kingsland Macy, to W. Cary Potter.  The Times took the opportunity to detail her impressive social pedigree.  “She is a niece of Mrs. Horace Havemeyer, Mrs. Irving K. Hall, Dick and Adolph M. Dick, and is the sister of William Kingsland Macy Jr. and J. H. Dick Macy.”  Her fiancé was the grandson of the famous and powerful Episcopal Bishop Henry Codman Potter, once as central in society as any Astor or Vanderbilt.

Things did not work out for the Potters, and a just a few months after their Reno divorce in the summer of 1945, Julia married Air Force pilot Lt. Charles H. Thieriot, Jr. in September.  This ceremony was, understandably, less elaborate and took place in the 81st Street mansion “in the presence of immediate relatives.” 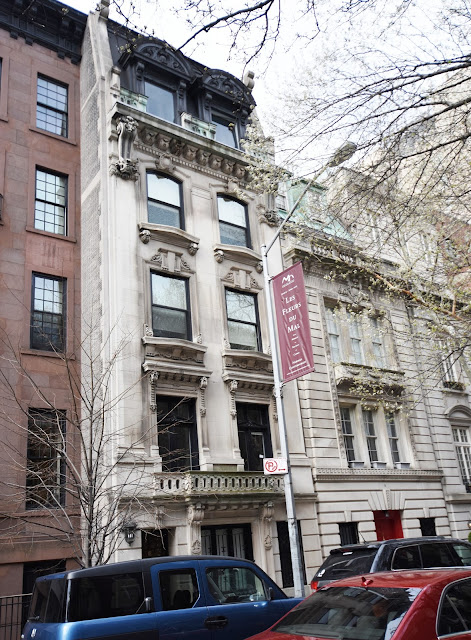 The following year William Kingsland Macy was elected to the New York State Senate.  He would remain a force in Republic politics until 1951; his first defeat for reelection coming in 1950.  When Macy stepped down from the political spotlight, he and Julia left East 81st Street as well.

In 1951 the mansion was converted to apartments.  The central entrance was removed and converted to a window.  It was an understandable and unsuccessful attempt to disguise the alteration.  In 1976 designer Ward Bennett was commissioned to re-do the interiors of one apartment in his contemporary, distinct style.  The 1907 details were stripped out and the apartment was given his starkly sleek signature.

Despite the lost doorway and the replacement windows, the elegant Beaux Arts townhouse looks from the street much as it did when Seymour and Ada Strauss gave an unexceptional brownstone a most exceptional make-over in 1907.