In April 1919 demolition had begun on the Federal-style house at No. 81 Hudson Street, on the southwest corner of Harrison Street.  The once elegant home was the last holdout of a refined residential neighborhood.  Now, with its red bricks and handsome splayed lintels covered in flaking white paint and a storefront replacing the ground floor, it had until recently been home to Austin, Nichols & Co., wholesale grocers.

With the war in Europe over, Captain Henry Mason Day, Jr. returned home.  His service in France had earned him the Legion of Honour.   Day’s father, who died on January 16, 1909 at the age of 57, had founded Henry M. Day & Co., a fruit and nut importing business.   Now the aggressive and ambitious 33-year old took the reins.

In February 1919, just three months after Armistice, Henry Day purchased the old house on Hudson Street.  On March 1 The Real Estate Record & Builders’ Guide noted “The buyers are commission brokers in export and import food supplies and will erect on the plot a new 3-story building for their exclusive occupancy.” 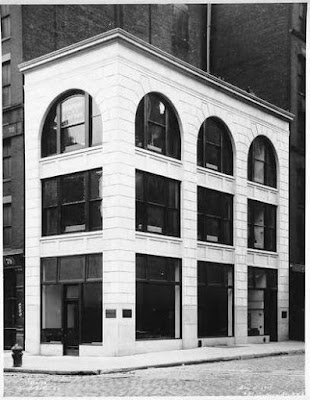 The $25,000 building (in the neighborhood of $345,000 today) was completed by the fall of that year.  On October 11, 1919 The Canner (confusing terra cotta for stone) noted “Henry M. Day & Co., who are now located in their new white marble building on Hudson Street in New York, are being frequently favored by out of town visitors who drop in to give their quarters the once over.”

Those out of town visitors would not have met with Henry M. Day, however.  He was already focusing on other things than canned fruit.  On December 20, 1919 the New-York Tribune reported on steamer passengers returning from Europe and mentioned “Another traveler on the Baltic was Henry M. Day, president of the American Foreign Trade Corporation, of this city, who has spent six months in Turkey and Russia.”

Not only was Day the head of the Foreign Trade Corporation and Henry M. Day & Co.; he was president of the International Barnsdall Corporation.   And the colorful millionaire Henry F. Sinclair was eyeing him for the position of vice president of the Sinclair Exploration Company as an “oil scout.”

On August 18, 1921 the New-York Tribune reported that Henry M. Day & Co. had sold “the new three-story and basement office and salesroom building, in the heart of the grocery district” to an investor.  The article added “Negotiations are under way for the lease of the property to a grocery concern.”

Henry M. Day was done with the grocery business.  As an executive with Sinclair he attended a conference in Genoa, Italy in 1922 and another in Lausanne, Switzerland in 1924 with the goals of protecting American oil companies in settlements.   His business dealings took him to Persia and Mesopotamia (now Iran and Iraq, respectively), and to Russia, where he was credited among other things with writing the contract for the development of the Baku oil field, the most extensive contract of its kind ever written.

When Harry Sinclair went on trial for his involvement in the Teapot Dome oil scandal, the highly-respected Henry M. Day found himself in hot water as well.  Both men were convicted and sent to jail for three and a half months for “jury shadowing.”  Day resigned after his release and his subsequent career would continue to be remarkable and colorful.

He became a senior partner in the Stock Exchange firm of Redmond & Co. (resigning in 1938 after it was censured by the Stock Exchange for Federal infractions); engineered the $6 million deal with the National Distillers Products Corporation and Overhold Distillery involving 35,000 barrels of whiskey in 1933 following the end of Prohibition; and was the consultant to the Illinois Glass Group.

In the meantime, the letters spelling out Henry M. Day & Co. were removed from No. 81 Hudson Street.  The floors were leased to various produce firms, like Eligio Cerruti, importer and exporter, who took a loft in April 1922.

While the Produce District changed, No. 81 Hudson Street did not.  In 2009, as the renaissance of Tribeca turned factories and warehouses into shops, restaurants and luxury apartments, No. 81 was converted to a restaurant tavern at street level and a single-family home above.  Outwardly, the dignified white structure is unchanged; its architectural personality as unique in the neighborhood as that of its remarkable builder.