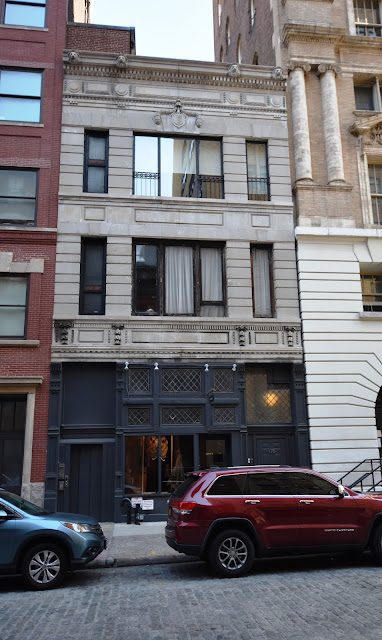 In 1892 the area around Franklin Street had seen the rise of loft and warehouse buildings for two decades.  That year candy manufacturer Henry Lillie Pierce constructed a lavish headquarters building at the corner of Hudson and Franklin Streets.  Following Pierce's death, another confectioner, Alexander Powell purchased the seven-story office building in 1903 and named it the Powell Building.

Three years later the Powell family extended its Franklin Street holdings.  Ida May Powell commissioned architect Henri Fouchaux to replace the three-story brick house (lately used as the Franklin Street Methodist Episcopal Church) directly behind the Powell Building with a three-story store and loft building.  Fouchaux's plans, completed in January 1907, called for a $25,000 structure faced in limestone.  The cost of the dignified Beaux Arts building would equal about $650,000 in 2016.

Somewhat squashed in between taller structures, No. 176 Franklin Street held its own by means of its impressive facade.  Fouchaux gave the little building an imperious presence with a high, paneled parapet, carved lions' heads, and a swagged shield.

At the time of the building's completion it sat squarely within the Produce District.  Hundreds of wholesale grocery merchants worked in the area; but unlike the Financial District, there were few places for the wealthy businessmen to lunch.  George A. Powell rectified the problem when, in 1916, he hired architect George Hof, Jr. to renovated the ground floor as a restaurant.

The cast iron base was infilled with wood, and diamond-paned leaded windows were installed.  The colonial motif was carried on inside where, taking its name from the street's namesake, the Franklin Inn opened.

In the meantime, one of the upper floors was headquarters of the Boosters' Club.  "Boosting" had become popular in large cities around 1906.  Clubs, specific to various industries, were formed to protect its members and to keep business from being wooed away by other metropolises.  On March 30, 1913 The Sun noted "The campaign is now being carried on every more earnestly than before."

The Booster Club at No. 176 Franklin Street was composed of produce merchants.  The city was thrown into near-panic in June 1919 when the teamsters went on strike and refused to pick up fresh vegetables and fruits to be delivered to retail grocers and restaurants.   The 3,700 drivers "employed in the fruit and vegetable trade," as described by the New-York Tribune, demanded shorter hours and higher wages.

On June 24 carloads of berries, watermelons and vegetables had to be "dumped" because of spoilage.  That same day the wholesale commissioner merchants met at the Boosters' Club to discuss a solution. The following day The Evening World reported "They voted to open their stores at 6 o'clock to-morrow morning and keep them open until 5 in the afternoon.  Police protection will be asked."

The individual retailers would have to bring their own trucks and wagons, and risk the threats of the strikers.  But the newspapers opined "Many of them are expected to make special efforts to do this because the situation in the outlying districts is described to-day as more serious than at any other moment since the strike."


As members of the Boosters' Club worked out deals and problems upstairs, the quaint Franklin Inn was not only a favorite spot for lunch, but for group dinners.  On November 6, 1920 the Marine Transportation Association, composed of officials of large steamship companies, held its annual "beefsteak dinner" here.  The Association described it as a time when "officials and employees of the various competing steamship lines get together and forget differences for the time being."

A month later the Rice Journal noted that New York's "rice row" had become split up--"half the operators being found in the Lower Wall street section and the other over on Hudson street."  But, the Journal said, "the Franklin Inn on Franklin street just off Hudson is nearly always certain to have two or three tables of gentlemen who could tell you the differences between blue rose and Jap, talking and incidentally eating every noon hour."

The popularity and necessity of booster clubs had dwindled by 1922.  After years at No. 176 Franklin Street, the Booster Club shut its doors in March that year.  The Fruit Trade Journal and Produce Record announced that "The furniture and fixtures of the local Booster's Club will be sold at auction here...at the Club rooms, 176 Franklin Street, to meet a deficit of about $1,100."  The article noted "The Club rooms have been closed owing to lack of support."

The Franklin Inn forged on; but on May 6, 1926 it suffered a blow when Prohibition agents put a six-month padlock on the door when liquor was discovered here.  In December 1930 the restaurant expanded into the second floor when a "cabaret" opened.  The third floor was listed as factory space at the time. 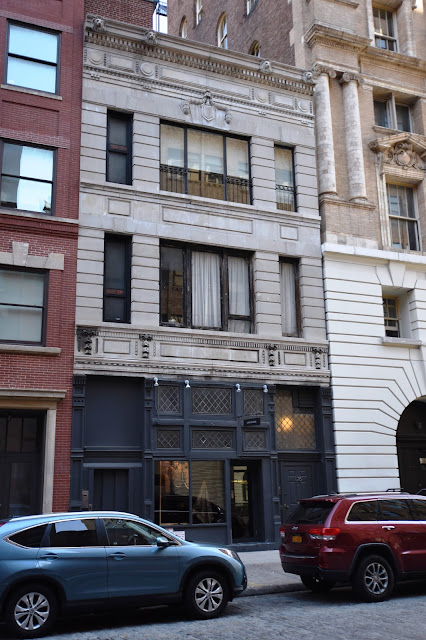 But when the Franklin Inn was raided again on February 11, 1932, Prohibition agents had had enough.  They arrested manager John Duffy, bartender Carl Krauss, and waiters Adolphe Forhne, Lorenz Horn and Gallus Dallinger, and seized 157 bottles of liquor.  But more importantly they removed $75,000 worth of fixtures, making it nearly impossible to reopen the illegal tavern.

In 1939 Joseph B. Powell, acting as executor of the estate of Ida May Powell, sold the building to the 176 Franklin St. Realty Corp.  Over the subsequent four decades the former Franklin Inn and the upstairs offices were operated as storage and factory spaces.  Rather surprisingly, the Franklin Inn's cast iron, leaded glass and wooden front survived, as did the parapet, into the last decades of the 20th century.

The Tribeca renaissance brought a different type of tenant.  In the late 1970s the Julian Pretto Gallery was here; in 1982 the former Franklin Inn space became Riverrun, described by The Times as "typical of many restaurant bars springing up in TriBeCa," and in October 2006 Adelle Kelley opened Moulin Bleu, a French-inspired home furnishings shop.  By 2012 Gary Graham's apparel shop had opened here.

Sadly, in remodeling the retail space the original Franklin Inn entrance was lost, as were the lower leaded windows.  At some point the crowning parapet was removed, making No. 176 Franklin Street just a little less regal.  In 2014 the upper floors, where fruit and vegetable wholesalers once wrangled over problems of produce prices and labor strikes, were converted to two loft residences.