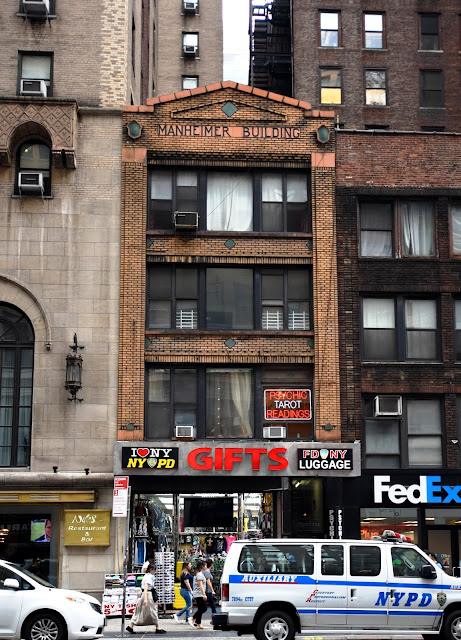 On Thursday, November 7, 1918 the “4-story substantially constructed brick loft building with store” at No. 369 Seventh Avenue was sold at auction.  The owner had made certain that the advertisement clarified this was a “voluntary sale,” and not a foreclosure action.  It also made note of the desirable commercial location “opposite Pennsylvania Station.”

The purchaser was 39-year old Joseph Manheimer, head of Manheimer Bros., Inc.  Like his father, Manheimer was a real estate operator and agent.   The “substantially constructed” building prompted its new owner to do renovations rather than to demolish and rebuild.  On July 25, 1919 architect John H. Knubel filed plans for “new stairs, partitions, roof, windows, plumbing, front and lower beams.”  The renovations would cost Manheimer $10,000—about $137,000 in 2016 terms.

Knubel gave the old building an up-to-date Arts and Crafts façade of yellow brick trimmed in terra cotta.  The broad openings at each floor were influenced by the Chicago School.  Above the top story Joseph Manheimer branded the building with his name in terra cotta tiles.  It was flanked by two slightly-projecting terra cotta shields and topped by a peaked parapet. 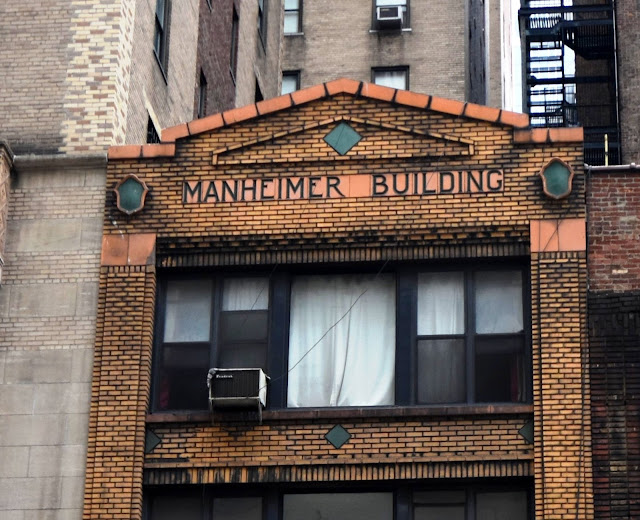 The alterations were completed by mid-September 1919 when the store and basement were leased.  Manheimer moved his own offices into the building as well.  The immediate neighborhood had comprised the fur district for several years and so the renovated building was a wise choice for furriers Meiselman & Peto.  They remained here until their bankruptcy in August 1921.

As the fur and apparel district moved north of 34th Street, No. 369 filled with a variety of tenants.  In 1945 it was home to M. Hollander’s podiatrist office.  Because Hollander did not use the title of doctor, his “foot correction appliances” might be viewed with some suspicion.  Nevertheless, he boasted 30 years of “successful experience” and his advertisement in Billboard magazine on February 10, 1945 tempted “Visit my office and let me show you by scientific application of appliances I can eliminate your foot trouble.”

A hold-out from the apparel trade at the time was A. & F. Embroidery, which remained a tenant until at least 1947.  Joseph Manheimer kept his personal office here (Manheimer Bros. had moved its headquarters next door at No. 365 in 1933, a property Joseph purchased in 1924) until his death at the age of 71 when his widow took title to the building.

After mid-century the camera district was centered within the Penn Station neighborhood.  Spiratone had its retail store in the building by 1957.  In 1964 it offered a specialized fixed-lens camera which could take photographs through a microscope.

In March 2011 the properties were sold in a joint sale by real estate agent Hook Hee Nam for $6.5 million.  He happily accepted a down payment of $1.66 million from the buyer, Jae Kun Jeung.

The problem was that Nan Su Kim was unaware that his buildings were being sold.

Hook Hee Nam handed over paperwork with Mr. Kim’s signature—except Nam had signed them himself.  He was arrested and “arraigned on charges of first-degree grand larceny, among other things, in connection with the fraud,” according to the Queens District Attorney’s Office. 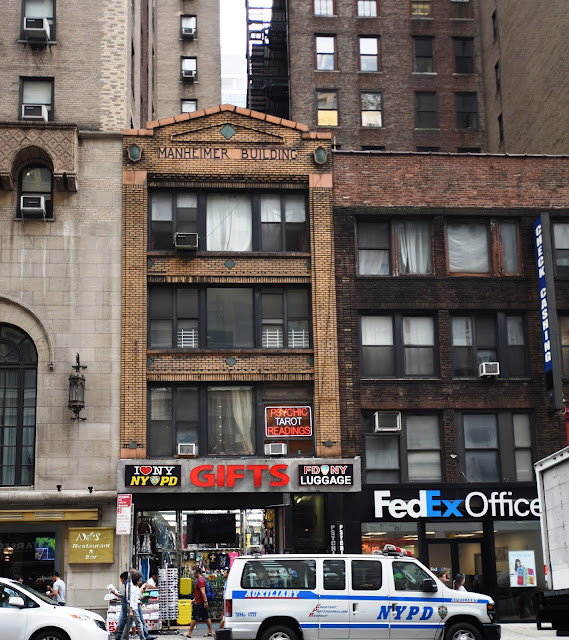 Although the shop front has been brutalized with a tawdry tourist gift shop, and window air conditioners poke through the upper story windows; John H. Knubel’s striking Arts and Crafts building survives as a delightful surprise on this frenzied section of Seventh Avenue.