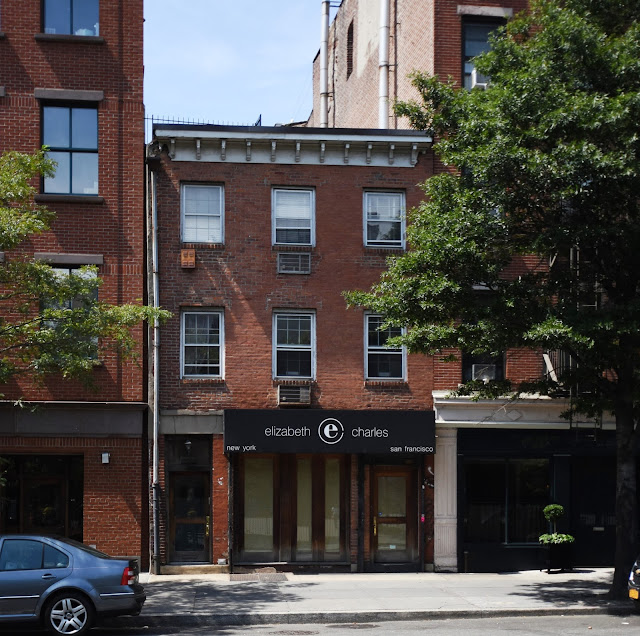 Development along Hudson Street—named for the nearby river rather than directly in honor of the explorer—was well underway when the three story building at No. 639-1/2 was completed in 1854.  The Greek Revival structure included a shop at street level and residential space for the storekeeper above.  The sills and lintels were, most likely, of brownstone; and a charming wooden cornice upheld by narrow brackets with dripping acorns completed the simple design.

It appears that the upper floors were soon rented to multiple residents.  On August 19, 1863 John Welsh was inducted into the Union Army; and on March 17, 1865 the same fate befell tenant J. White.

In 1868 or ‘69 Joseph G. Orr rented the entire building from the Mayer family and opened his variety and confectionery store here.  He and his family lived upstairs with his tenants.  His ten-year lease cost him $1,200 per year, a little over $1,700 a month in 2016.

When Orr’s lease ran out he had a decision to make.   The Manhattan Railway Company had recently extended its elevated railroad northward along Greenwich Street, just behind No. 639-1/2 Hudson Street.   Property values on Hudson Street declined and Orr was faced with the difficulty of renting his upstairs rooms with the accompanying rumble and smoke from the trains.

Joseph Orr's negotiations resulted in his rent being reduced to $1,050 in 1879.  He refused to sign a lease, instead entering into a year-to-year arrangement.  As it turned out, Joseph Orr would stay on for decades, renting rooms and running his variety and candy store.

The Orr family was pulled into a murder mystery on New Year’s Day 1888.  Orr’s son, also named Joseph, worked as a shipping clerk at the C. A. Schmidt & Co. upholstery store on West 14th Street.  A co-worker, William J. Hanna appeared at the Orr apartment around 7:30 on Monday, January 1 on his round of New Year’s calls.  Hanna’s young wife was pregnant and stayed home at No. 439 West 22nd Street.

Around 8:00 Hanna left the Orr residence, telling Joseph that he was off to James Lynch’s saloon at MacDougal and West Third Street.  He was found by Louis Pulver at 10:00 lying on the sidewalk in front of C. Overbaugh’s saloon at Greenwich Avenue and 11th Street.  Pulver and the saloonkeeper helped him into the bar.  They considered sending him to St. Vincent’s Hospital, but according to witnesses later, Hanna “recovered and started to go home.”

Hanna never made it home.   The 31-year old was found later in even worse shape.  Around 11:00 Mrs. Hanna answered the door bell to find, according to The Sun, “two rough but honest-looking men supporting her husband, who was covered with blood and mud, and weak in knees and voice.”

“This is my wife,” Hanna muttered.

“I am sorry for you, madam” said one of the men, noting her obvious pregnancy.

Throughout the night Hanna awakened briefly, each time speaking of an assault.  “One of the men stabbed me with a penknife,” he said once.  And “He struck me with a wrench, but he did not get my watch,” he mumbled another time.

Around 3:00 a.m. his wife sent for a doctor and her father-in-law.  The physician diagnosed a fractured skull.  “He could do nothing but wait for death, which came toward noon yesterday,” reported The Sun on January 4.   Detectives interviewed the Orr family, who could give little help.  The New York Times wrote “It is thought that Hanna, while drunk, ran foul of some ruffians and was beaten by them, but not robbed, as his gold watch and a small amount of money were still in his possession when he returned home.

In February 1891 the first issue of the New York Recorder was published.  The publishers initiated a marketing gimmick to boost sales.  The Newsman explained in April that the “popular ‘Newsdealers Contest’ was inaugurated, towards which the proprietors of the paper donated the sum of Fourteen Thousand Dollars to be distributed among the 1,600 newsdealers selling the largest number of Recorders during the four weeks from February 18th to March 17th, inclusive.”

Elizabeth Mayer’s will left No. 639-1/2 Hudson Street to her son, John F. Mayer.  Things got tangled and ugly when John died first.  His wife, Annie F. Mayer, was three months pregnant at the time.  Following Margaretha Mayer's birth, Elizabeth revised her will, leaving the Hudson Street property to the infant.  Elizabeth’s grandsons, Charles and John Jacob Flammer, were named administrators of the estate.

Trouble first started on June 30, 1896 when Annie went to court to revoke the Flammer brothers’ administration.  Court papers noted “Annie F. Mayer produced in court a child who was claimed to be, and which was then proven to be, a child born to her a few months after the death of John F. Mayer.”

Annie described her daughter “as having been from its birth below the normal size, sickly and puny.”  She informed the court that Margaretha was 11 months old.

A year later, having successfully removed the Flammers from involvement in the property, Annie tried to get rid of Joseph C. Orr.  The case “for ejectment” and “to recover mense profits” was put on the Brooklyn docket, where Annie lived.

Before the case came to court, Margaretha (the legal owner of the Hudson Street property) died.  Annie quickly replaced the dead infant with another.  When Annie died at the home of her sister, Maggie Smith on July 18, 1899, court papers said “There was living with her, at the time of her death, a child whom she represented to be the said Margaretha Mayer and whom she called Margaretha Pearl Mayer.”

But a witness later testified “I afterwards learned that the said Margaretha Mayer had died in July, 1896, and that the said Annie F. Mayer had procured a waif from the Foundling Asylum…to take the place of her said deceased child…suppressing the fact of its death.”

The Flammer brothers leaped into action.  They sued to overturn Elizabeth’s will, claiming that not only was Margaretha dead; but that Annie had never been legally married to John F. Mayer.  Maggie Smith, the guardian of the new Margaretha, then sued the Flammers on July 17, 1901.  Caught in the middle of the confusing litigation was Joseph C. Orr.  Both the Flammers and Maggie Smith wanted him out.

Before that happened No. 639-1/2 Hudson Street was sold to Thomas E. Stevens on June 19, 1902 for $7,550.    The elderly Joseph C. Orr was still running his store and renting the rooms in 1907 when Stevens now sued him for the rental profits.  It seems to have been the last straw for the man who had sold candy and newspapers here for four decades.  No listings for Joseph C. Orr at the address appear after 1907.

The little brick building continued to house a shop and apartments.  In 1940 the Loggola family lived here.  John, who was 50, and his wife, Mary, 43, were both born in Italy.  John made his living as a porter.  With them in the apartment was their 24-year old son, Bernard, who worked as an auto mechanic, 16-year old James and daughter Anna, who was 14. 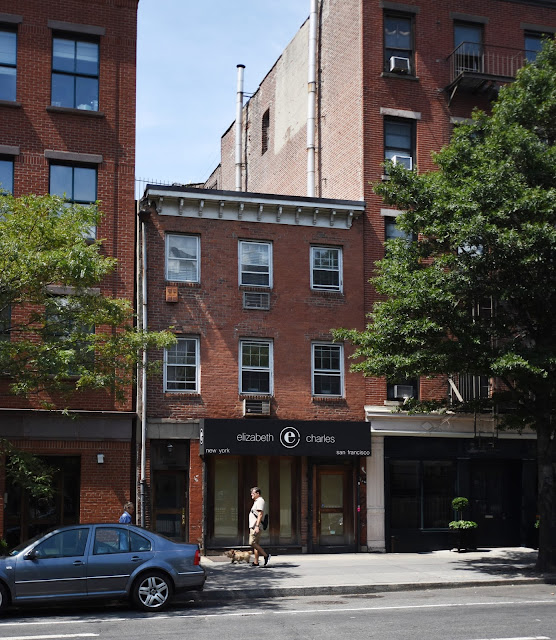 In 1947 the building received a make-over of sorts.  The brownstone lintels and sills were replaced with brick and a new storefront installed.  By 2008 Joseph C. Orr’s variety store was the home of the Elizabeth Charles store.  It remained here until 2013.  The quaint little building that never earned its own address is a picturesque presence on busy Hudson Street, highlighted by the miraculously surviving wooden cornice.

photographs by the author
Posted by Tom Miller at 11:43 PM