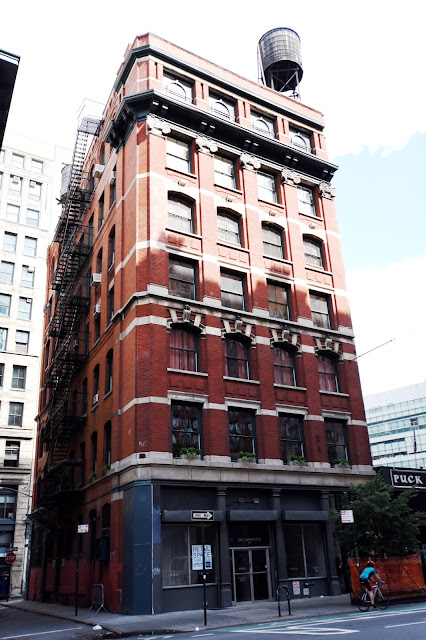 In 1889 Leo Schlesinger most likely surprised other businessmen along Elm Street when he supported the proposed extension of Elm Street to Lafayette Place.  At the time Elm Street ended at Jersey Street.  Lafayette Place began about two blocks to the north.  The public works project would necessitate the demolition of several significant business structures.  One of the buildings that would be affected was Schlesinger’s.  His toy factory at Nos. 129-131 Crosby Street ran back along Jersey Street and straddled the proposed new thoroughfare.

But on November 9, 1889 the Real Estate Record & Builders’ Guide reported “One of the most important briefs was from Leo Schlesinger, of Crosby street, the well-known manufacturer of toys and tinware, who strongly favored the improvement, notwithstanding that it would have taken 80 feet away from the front of his manufactory.”  Schlesinger argued that cutting the street through would improve transportation and, therefore, the city and its industries in general.

Six years earlier, on October 13, 1883, The American Machinist had reported “Leo Schlesinger, 11th st. and Avenue D…will have a new manufactory of tin toys on Crosby Street.”   The toy maker had purchased the two lots on Crosby and three on Jersey Street from the Stewart Estate for $205,000 ($5 million in 2016).  He commissioned the architectural firm of H. J. Schwartzmann & Co. to design the toned-down Queen Anne style building, completed in 1894.

Schlesinger, who was also a director in several banks and other corporations, employed an average of 160 workers in his factory.  He leased extra space in the building to commercial tenants.  In June 1884 the Industrial Printing Co. was here, looking for a “First-Class job compositor,” one who was “accustomed to fine commercial work.”  The firm promised “steady position to the right man.”

There was one rather surprising tenant.  In January 1884, according to The Sun, “the United Hebrew Charities determined to take measures to save the poor boys of their race in this city from what seemed to threaten them as a common fate, viz., becoming peddlers.”

The Hebrew Technical Institute was formed and in its 25th Anniversary booklet it remembered “four months later the sixth and seventh floors of a factory building at 129 Crosby Street were rented from Mr. Leo Schlesinger, who was to furnish heat and power.  There the school continued from May, 1884 to February, 1887.”

While the debate on the extension of Elm Street dragged on, Leo Schlesinger expanded his business.  In August 1895 he partnered with L. Stern to form The Stanley Cycle Mfg. Co.  Iron Trade Review reported the new firm would “manufacture high grade bicycles.  The company expects to turn out between 10,000 and 15,000 wheels per annum” at the Crosby Street factory.

Finally, in 1897 the city condemned and demolished the buildings between Jersey Street and Great Jones Street in the way of the Elm Street project.  Included was the 80-foot section of Schlesinger’s factory building, for which the city paid him a handsome $96,000.  But rather than abandon his reduced property, or demolish the remaining chunk and start over; he commissioned the architectural firm of Buchman & Deisler to remodel it.

On July 10, 1897 the Record & Guide reported on the filing of 11 building plans related to the widening and extension of Elm Street.  Among them were Buchman & Deisler’s plans for Schlesinger’s seven-story factory.   The Guide’s description was nebulous: “extension of rear wall and new front.”    The project would be much more.

The architects essentially flipped the front of the building—moving the architectural focus to the wider, newer Lafayette Street.   While harmonious with Schwartzmann’s Queen Anne-style Crosby Street design, Buchman & Deisler’s Renaissance Revival Lafayette Street elevation was more aggressive.  White limestone starkly contrasted with the deep red brick.  Handsome stone capitals capped the three-story brick piers at the fourth through sixth floors.  As an added touch, the architects chamfered the corner; a detail which extended to the cast iron store front. 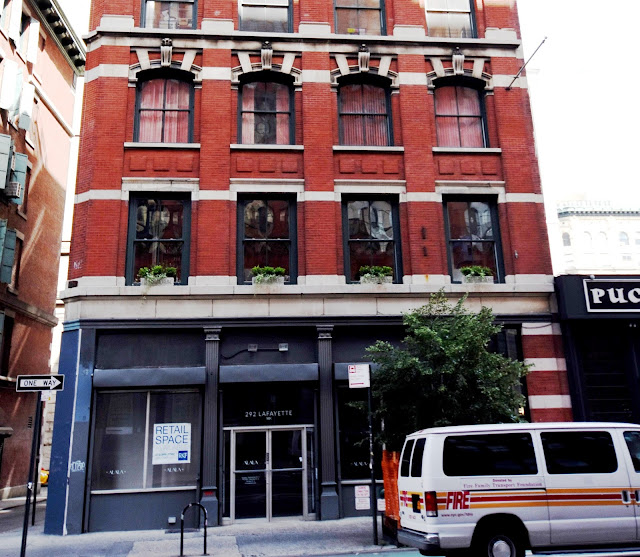 More than a year after the Elm Street-Lafayette Street project began, businessmen were furious with the city’s delay in its completion.  On September 30 Leo Schlesinger was the chief spokesmen at a meeting with the Mayor Robert Anderson Van Wyck.  He presented the Mayor with three photographs “which clearly proved not only the incomplete state of the work, but the generally obstructed condition of the thoroughfare,” reported the Record & Guide.  Schlesinger called the conditions “disgraceful.”

Disaster was narrowly averted late on the night of November 24, 1902 when the water tank atop the building collapsed.  Fortunately for the businesses inside, there was no damage; however pedestrians must have been startled when “water poured over the roof into the street,” as reported by The Sun the following morning.

By 1915 the area around No. 296 Lafayette Street was the center of the millinery and hat-related industries.  Leo Schlesinger had moved his operation to Front Street years earlier.  Among the businesses in the Lafayette Street building was Ignatius Buckman who manufactured hat making machines.

That summer he did a friend, John Treubert, a favor by storing $4,000 worth of velvet “for safe-keeping.”  But the 51-year old Buckman hatched a nefarious scheme.  He staged a burglary of his own factory, instructing several of his clerks to sneak out the valuable cloth.

When Treubert arrived at the factory the first week of June, Buckman sadly reported that his place had been robbed and that in addition to Treubert’s velvet, the thieves had gotten away with $2,000 worth of Buckman’s property.

John Truebert was not convinced.  He notified detectives who questioned Buckman’s employees.  Unfortunately for Buckman, they readily confessed to having followed their boss’s criminal orders.

Police surrounded Buckman’s house at No. 283 East 164th Street on the night of June 11.  The Evening World reported “when they were demanding admission to the front door he appeared at a rear window in his night clothing and was about to jump when he saw other detectives and stepped back.”  Ignatius Buckman was arrested for having burglarized his own factory. 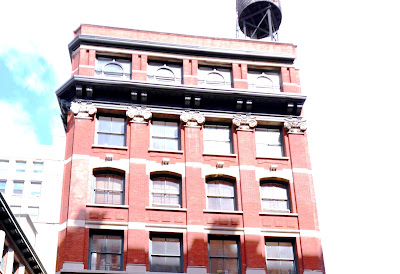 In 1919 the Crosby Street store was home to the International High Speed Steel Company; while on an upper floor the Bristol Hat Company was among the millinery firms doing business.  One tenant not in the hat business was Geringer Brothers, a manufacturer of “gas and lamp shades.”

Isidor Geringer was working late with two employees on the night of November 27, 1920.  That night a series of violent hold-ups erupted in both Manhattan and the Bronx.  One of them would take Geringer’s life.

At around 9:00 three men wearing masks and long raincoats barged into the shop.  The employees were ordered to raise their arms into the air.  Geringer nervously watched as one of the thugs was taking $12 from the pocket of Louis Lobell.  He dropped his hands to his side and was immediately shot.  The New York Herald reported “He was taken to New York Hospital and probably will die.”

A bizarre incident occurred here on November 2, 1922 after fire erupted in the building.  Fire fighters poured thousands of gallons of water into the burning building, the upper floors of which were occupied “by various paper and hat concerns,” according to The New York Herald the following day.

Six fire fighters from Hook and Ladder Company No. 9 entered the building and began chopping through a wall.  What they did not realize was that the well-built structure had trapped the growing amount of water, to the point that the walls were bulging, according to the newspaper.

Finally their axes broke through and the firemen were carried away in the massive flood of water which was released.  “Three of the firemen—Wynn, Scheck and Matofsky—were swept down the stairs from the first to the ground floor, and after being dashed from wall to wall finally were catapulted into the street, landing in the roadway half conscious.”  The three others, Lt. Lamb and Firemen Murphy and Murray “narrowly escaped drowning,” according to the newspaper, by clinging “to the only substantial article in sight, a stair rail.”

The former Schlesinger toy factory continued to be home to various small industries for the next six decades.  Then in 1984 the upper floors were converted to “joint living and work quarters for artists.”  Today the lofts where tin tea sets and fire trucks were manufactured are luxury residences that sell for over $3 million.  Buchman & Deisler’s well-preserved façade survives nearly a century and a quarter after Lafayette Street plowed through Leo Schlesinger’s factory.

photographs by the author
Posted by Tom Miller at 1:42 AM