Battered and Endangered -- No. 25 Cleveland Pl. 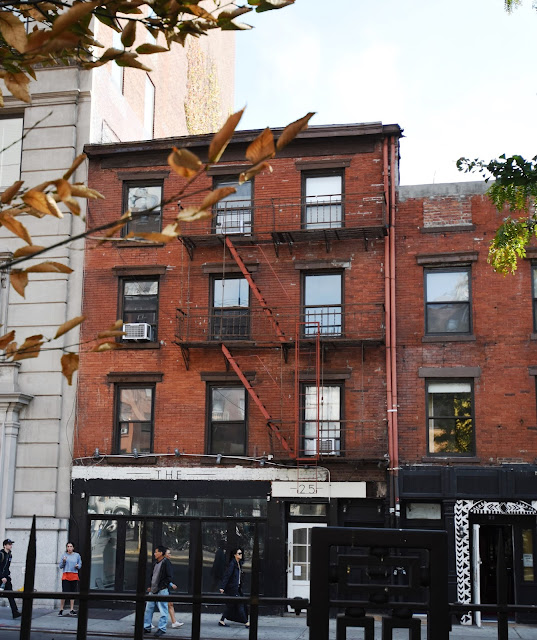 Residents of the little two-block long Marion Street, which ran diagonally between Spring and Broome Streets, struggled for existence in the 19th century.  The 25-foot wide, brick-faced Greek Revival house at No. 25 was home to several immigrant families by 1851.  In the yard behind was a small building which was also rented to indigent tenants.

The plights of the residents throughout the 1850s was told through the classified advertisements they placed in search of work.  In September 1851 the occupant of the "first floor, front room," wrote "Wanted--by a respectable young woman, a situation as Nurse and Seamstress.  Has lived four years in her last situation, and left at her own request."  Six months later another tenant, also a "respectable woman," was looking for a position "as good plain Cook and first-rate Washer and Ironer."

A resident with the initials P.F. lived in the rear house in June 1853 when he placed an ad.  "Wanted--by a steady, active young man, a situation as coachman and to work in a garden, and to make himself generally useful.  Has satisfactory testimonials."  It was possibly P.F.'s wife who was looking for income following the birth of a child the following year.  An advertisement in The New York Herald on August 7, 1854 read "Nurse--A respectable married woman wishes a baby to wet nurse at her own house, 25 Marion street, in the rear."

The advertisements continued.  A month later a resident on the first floor of the main house looked for "a situation by a respectable woman, as excellent cook, washer and ironer, in a private family."

By the end of the Civil War the Marion Street neighborhood was part of what was deemed "The Italian District."  But at least one resident of No. 25 was Irish and the mix was not friendly.  Daniel Donovan "lived in the same premises with a number of Italians," as explained by The New York Herald on June 12, 1872, and "was in the habit of beating and abusing them."

Donovan's bullying came to an end on Sunday afternoon, June 9, 1872.  The Herald reported "he was practising with his fists upon John Beoni and Raxo Attela, the latter of whom dealt Donovan a blow on the nose."  Infuriated, Donovan "struck out right and left at the Italians."  During the melee, Guydon Bosstoffin grabbed a large pair of shears and thrust them into the Irishman's stomach.

As Daniel Donovan lay dying in his room, the Coroner rushed to take his ante-mortem statement, critical in the investigation of Victorian murders.  In the meantime, Bosstoffin and "two other Italians" were under arrest.

Within the next two years family issues would be a problem for some residents.  In April 1873 Donat Bruno, "an Italian flute player," left and never returned.  A month later his brother, Roch Bruno, placed advertisements hoping "to know in what town he is now residing."

Joseph Stefano was apparently frantic after his 12-year old son John disappeared on February 4, 1874.  Stefano offered $20 to "any one returning him to his father."  He ended his plea in The New York Herald by saying "He plays the violin."

Another Irishman who rented a room in the house occupied almost entirely by Italians was 40-year old James Gately.  He was taken from No. 25 Marion Street to Bellevue Hospital on the night of September 28, 1877 where he died in his bed two days later.  The Coroner's inquest found "cause of death, peritonitis, from stab wound of abdomen inflicted with a knife in the hands some person to the jury unknown at No 25 Marion street on the night of September 28."

The bleak lives of the impoverished Italian immigrants of No. 25 Cleveland Place were in stark contrast to the lifestyle of mining magnate Daniel Guggenheim.  The two worlds came unexpectedly together on January 29, 1915.

Six-year old Ignatio Lacarta was playing on Lafayette Street that afternoon, on the opposite side of the little triangular park in front of his home.  Just as Guggenheim's limousine approached, Ignatio darted out between parked cars and was struck.

The distraught millionaire took the boy in his arms and shouted to a traffic patrolman to direct him to the nearest hospital.  Guggenheim's chauffeur sped to the New York Dispensary.  The New York Times wrote "Mr. Guggenheim sent word to the boy's parents, and met them in the dispensary."

It appeared Iganatio was severely, but not fatally, injured.  "At the hospital, it was said the boy's skull was probably broken and his scalp badly lacerated, but he would recover."  Later the newspaper noted that Guggenheim had told the surgeon "to spare no expense to save the lad's life."

It was most likely Daniel Guggenheim's insistence on the best of care (and his money) which resulted in Iganatio's total recovery.  "For some time it was feared the boy would have concussion of the brain, but this was prevented by careful treatment," The Times reported weeks later.

Finally, on February 28 the boy was declared "thoroughly recovered" and released from the hospital.  Word had been sent to to a much-relieved Guggenheim the previous day.  He reported that the news made him feel "very happy."

Although the Cleveland Place neighborhood was just one block north of the Police Headquarters, it was the haunt of Italian gangsters and bootleggers in the 1920s.  The immediate area earned the nickname of the "whiskey curb market" during Prohibition.

A long-term resident of No. 25 Cleveland Place was petty gangster Frank Lucci.  The 20-year old was arrested on July 7, 1925 along with six other Italians suspected of "many hold-ups, burglaries and shootings in recent months," according to Deputy Chief Inspector Fay.  He was arrested again on September 11, 1936 for counterfeiting; and was still living at No. 25 when he was nabbed once again, this time for counterfeiting gasoline ration stamps, in 1943.  He was sentenced to four months in prison for that offense on October 7.

In the meantime the ground floor had been converted to a barber shop by the mid 1930s.  Operated by barber Salvatore Di Sapio, it doubled each year as a polling place.  Among the first voters here on November 2, 1937 was Tammany Hall leader Albert Marinelli.  The New York Times reported "He entered a barbershop at 215 Cleveland Place just after 6 A. M., spent a brief space at the machine and then stepped out to vote the paper P. R. ballot.  'A real Democratic vote,' he announced as he dropped the ballot into the slot."

Two years later it was not a politician whose name appeared in newspapers, but the barber's.  Salvatore Di Sapio and his wife, Angelina, lived on Staten Island with their four daughters.  He quietly cut hair in his three-chair shop on Cleveland Place.  Nothing, it would seem, suggested that he was involved in the criminal activities of the area.

For decades James J. Hines had been described by newspapers as "powerful" in the Tammany administration.  But as political reformers gained strength his reputation changed.  In May 1938 The Times referred to him as a "shadowy figure."  He was arrested for graft, corruption and illegal gambling.

On March 1, 1939 officials from District Attorney Thomas E. Dewey's office walked into Di Sapio's barber shop and arrested him.  He was charged "with attempting to influence a juror in the recent trial of James J. Hines."

The barber's attorney attempted to paint him as an unknowing pawn.  He told the court "that his client was a 'dunce or a boob' to have undertaken the fixing job, and that he had been 'sucked in on this,'" reported The New York Times on March 23, 1939.  The newspaper said "The type of sentence imposed on the barber will mean that he may serve from six months to three years."

Justice Finegan was unswayed by the attorney's argument; instead feeling that it was Di Sapio who had persuaded his accomplice in the case.  "I believe this man Di Sapio, led this man Ficke into this thing."

The judge lambasted Di Sapio when he handed down the guilty verdict.  "You can't make money like that.  You will suffer more than any sentence I can mete out for the rest of your days because you'll be shunned and your children will have a hard time living this down."

On August 18, 1984 The Times printed a list of properties P. Zaccaro & Company managed; many of which were gritty tenements with eye-brow raising connections.  "City deed records now list the owner of a combined lot at 21-23-25 Cleveland Place as Joseph LaForte, whom the city police described to the Senate committee as a leader of the Gambino crime family" said the article.

The Soho area was revitalized in the coming years, and Savatore Di Sapio's old barber shop became La Locanda Di Giotto, an Italian restaurant in 1986.  In 1991 it was taken over by Caffe Giardino, described as a "small unpretentious cafe" with a large garden which "attracts tourists."  It later became home to Le Jardin, a "homey French bistro with a lovely garden," and then, in 2011, trendy restaurant What Happens When.

In 2006 No. 25 and its twin at No. 23 were purchased and the owner quickly hired David Turner Architect PC to "reconstruct" the combined buildings as a new condominium.  The Department of Buildings' permit allowed the removal of portions of the interiors, noting "Roofing Removal Excluded."

In what was most likely a deliberate "Oops!" moment the contractors demolished the roof of No. 23 and were quickly hit with a Stop Work Order in 2007. 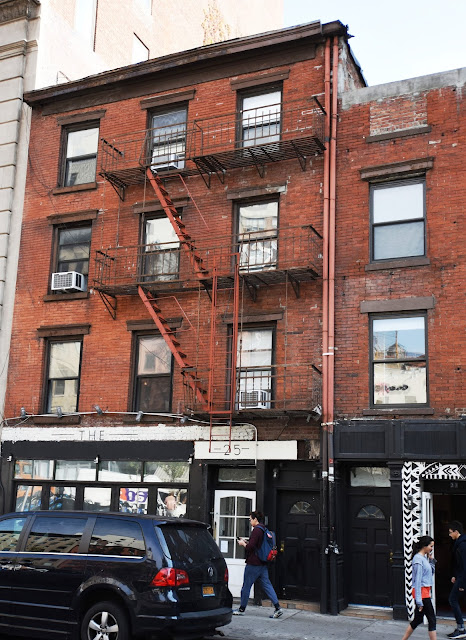 Nine years later, in 2016, little has changed.  No. 23 sits partially demolished while No 25, with its gloriously colorful history of immigrant struggles, Prohibition gangsters and dirty politicians, awaits its fate.