At the turn of the last century reformers launched aggressive attacks on the notorious Tenderloin and Bowery districts.  The music halls of the Bowery had for years been, in fact, sordid dens haunted by prostitutes.  On March 14, 1900 the New-York Tribune noted the change in the neighborhood prompted by reform groups like the Parkhurst Society.

Police Captain Thomas was threatened with indictment for corruption.  And the evening before police had driven the prostitutes from the Bowery music halls.  “The Bowery was quieter than usual,” said the newspaper.  Included in the list of seven music halls mentioned was Flynn’s, at No. 161 Bowery.  Like the others, Flynn’s held its stage performance, but “the programme was toned down, and business was dull.  The women who frequent the places mentioned either were in the street or remained at home.”

Later that same year Flynn’s Music Hall was demolished.  Architect William Dilthey was commissioned by the estate of Nehemian U. Tompkins to design a replacement structure which would reflect The Bowery’s changing personality.  His completed 23-foot wide, seven-story factory and store building was essentially Renaissance Revival.  But Dilthey liberally splashed his design with neo-Classical elements.  A two story limestone and cast iron base incorporated Corinthian columns and flowery swags, upon which four engaged classical urns perched.

The motif reappeared in below the sixth story cornice where flowers dripped from wreathed cartouches connected by floral swags.  Dilthey added dimension by interrupting the rusticated brick piers with jutting, angled elements supported by foliate brackets at each floor. 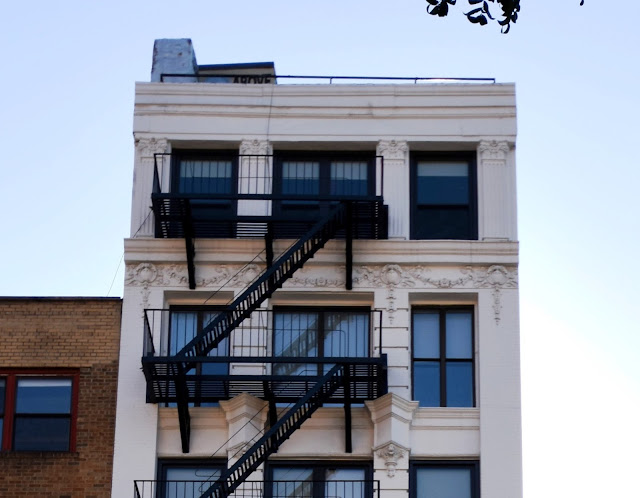 James E. Bristol leased the new store, signing a 10-year lease on April 26, 1901.  His initial rent was $2,100 per year, increasing to $2,500 by the end of the lease (about $6,000 a month for the larger amount in 2016 terms.)  Bristol dealt in “grocer, delicatessen, hotel and restaurant fixtures;” a pre-shadowing of the Bowery as Manhattan’s restaurant supply district about half a century later.

In February 1903 the “upper lofts of the new building recently erected,” as described by the Real Estate Record & Guide, were leased to the National Cigar Manufacturing Co., whose home offices were in Albany.  Other floors were occupied by apparel manufacturers, including William Levin, who employed just two workers making sweaters; and Abraham Gold, whose four workers manufactured vests.

When the Nehemiah U. Tompkins Estate sold the building to William G. Willmann in 1910, its tenant list included apparel firms like Levin & Goldberg, and Hartman, Langmeyer & Plattner; and the Eisenberg Cigarette Co.  Another tobacco related firm, the Parodi Cigar Co., Inc. was in the building before 1915, when it began construction on a $75,000 factory building in Jersey City.  That same year The Evening Post valued No. 161 Bowery at $63,500; in the neighborhood of $1.5 million today.

William G. Willmann leased the entire building in December 1916 to the United Office & Fixture Company.  But a sub-tenant was far more recognized.  Tammany Hall politician Timothy Daniel Sullivan, known familiarly as “Big Tim Sullivan,” had run sway over the East Side from the T. D. Sullivan Association clubrooms at No. 207 Bowery.  Sullivan died in 1909; however the Association continued, moving to No. 161.

On December 26, 1916 The Sun noted “It used to be that every Christmas as many men as could be fed in the course of a whole day crowded into the Sullivan clubrooms at 207 Bowery and there was a big time, with a lot of important persons who owed allegiance to the Sullivans coming to the Bowery fro uptown and helping with the celebration.

“However, the T. D. Sullivan Association distributed 1,200 Christmas baskets at its headquarters 161 Bowery…All of the forenoon there was a long line of poorly clad men, women and children filing in and out of the clubhouse and receiving their baskets of chicken, canned soup, coffee, macaroni, vegetables, fruit and candy.  In each basket there was food enough to feed six persons.”

By the end of World War I, when William G. Willman sold No. 161, garment manufacturers had moved northward.  In 1919 tenants like “metal spinners” Schottky & Son occupied the building.

The depressed conditions of the Bowery reflected in the Sullivan Association’s Christmas charities continued throughout most of the 20th century.  Popularly called New York’s Skid Row by the 1960s, it was famous for its flophouses and derelicts.  But the dawn of the 21st century saw a renaissance of the neighborhood.

The change was no more evident than at No. 161 Bowery when, in 2014 artist Shepard Fairey completed a 30 by 40 foot mural on the southern exposure.  The work was commissioned by the Little Italy Street Art Project. 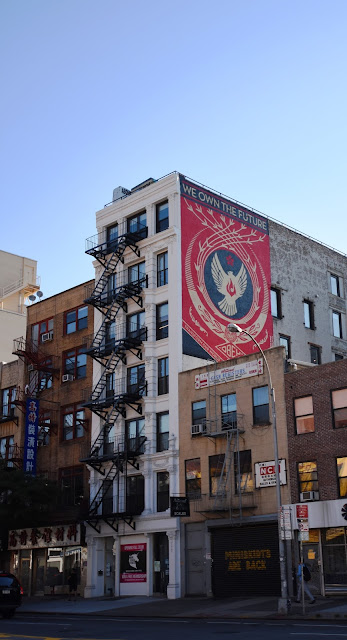 While Fairey painted the brick wall outside, work was going on inside the building.  One by one, as the leases expired, former factory spaces were being converted to modern residences.  The entire structure was slathered in white paint, successfully hiding the contrasting materials and obscuring Dilthey's delicate neo-Classical elements.

Nevertheless, William Dilthey’s handsome blend of architectural styles stands out among its gritty neighbors; a symbol of major change that came to the Bowery at the turn of the last century.