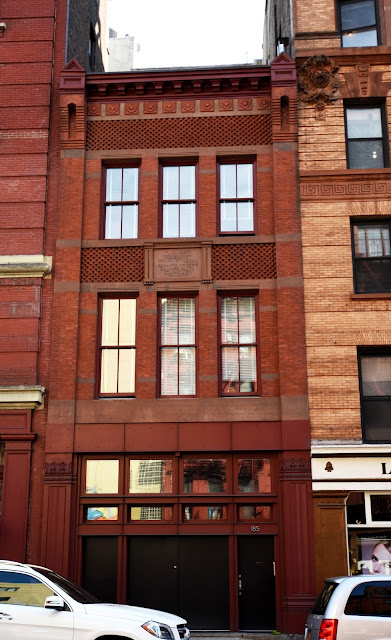 On April 10, 1886 the Board of Commissioners announced it would accept bids for "for furnishing the materials and labor, and doing the work required for construction and erecting" the firehouse for Engine Company No. 55 at No. 173 Elm Street.  The once residential neighborhood of half a century earlier was now filling with factories and warehouses.

Napoleon LeBrun & Son was the official architectural firm of the Fire Department.  The 1880s saw a flurry of firehouse construction as the city planned new stations in developing areas and modernized several existing houses.  Although Napoleon LeBrun & Son would be remembered for their exciting, individual firehouse designs, for several years during this period they recycled one Queen Anne model.

Engine Company No. 55 was completed in 1887.  Its facade was textured by diapered brickwork, highlighted with terra cotta ornaments, and trimmed in stone.  Three stories of brick sat upon a cast iron base dominated by the wide, paneled double bay doors.  The firehouse was strikingly similar to several others--like Engine Company No. 54 on West 47th and Engine Company No. 15 on Henry Street.
The firefighters of Engine Company 55 dealt not only with blazes in the low frame buildings from the first half of the century; but with hard to fight fires in the taller loft structures.  An example was the fire which broke out in the five-story building at No. 59 Spring Street on May 24, 1888.


Hugh McGinnis hired older Irish women to work in his "rag warehouse."  Ten were sorting rags on the top floor at 11:00 that morning when, as worded by the New-York Tribune, "a fire broke out almost under their noses."  The panicked women ran as the floor filled with smoke,

Seven women made it to the street safely.  Three others were less lucky.  The Tribune reported "Bridget O'Mara of Leonard-st., went down as far as the third-story and then tried to slide down a rope in the hoistway.  She lost her hold about sixteen feet from the ground and fell the rest of the way, breaking a rib and receiving serious internal injuries."


By now Engine Company No. 55 was on the scene.  Firefighter Edwin Ford ran up through the flames.  He found Catharine Sullivan, her dress on fire, trying to escape to the roof.  He carried her to the roof of an adjoining building, then down the stairway to the sidewalk.  The newspaper said "She had been burned dangerously about the face and limbs."

Another worker, Mary McCarthy, had jumped from the window to the roof of the building at the rear.  Although she suffered only a sprained wrist and went home; Bridget O'Mara died at St. Vincent's Hospital later that night and a hospital spokesperson said that Catherine Sullivan, too, would probably die.

Only five years after the building's completion, in October 1892 the Board of Estimate and Apportionment budgeted funds for a new site "for Engine Company 55, now at 173 Elm Street near Broome Street."  The move was no doubt in anticipation of the proposed extension of Lafayette Place to Elm Street, and the simultaneous widening of Elm.

That ambitious civic project began in 1897 when the city condemned and demolished the buildings between Jersey Street and Great Jones Street in the way of the Elm Street project.  On July 7, 1898 The New York Times reported "Bids were opened for a new fire house at Broome and Elizabeth Streets, for Engine 55, which must move from Elm Street because of the widening of the street."

Elm Street was now part of the newly-formed Lafayette Street, taking the new address of No. 185 Lafayette Street.  Rather astonishingly, after Engine Company 55 moved out the city moved the facade back to the new property line.  It was no doubt at this time that the top floor was lopped off. The cornice, the band of terra cotta rosettes, and the brick corbelled brackets were all carefully lowered to make the alterations seamless.


The city retained possession of the old firehouse, maintaining it according to Fire Commissioner Adamson in 1914, "solely as sleeping quarters for Deputy Fire Chief Thomas R. Langford."  Three years later the city clumped No. 185 Lafayette Street with several other properties to be traded "for undeveloped land at Inwood Hill owned by private parties," according to The Sun on May 19, 1917.

Converted for business use, the ground floor of No. 185 was an automotive repair shop by 1923; and at mid century was the "surplus store" owned by Elias Ziegler.  By the turn of the 21st century the Soho neighborhood around No. 185 Lafayette Street saw the repurposing of old lofts and warehouses into residential spaces and trendy shops.  In 2004 the old firehouse was converted to a ground floor studio and a single apartment above. 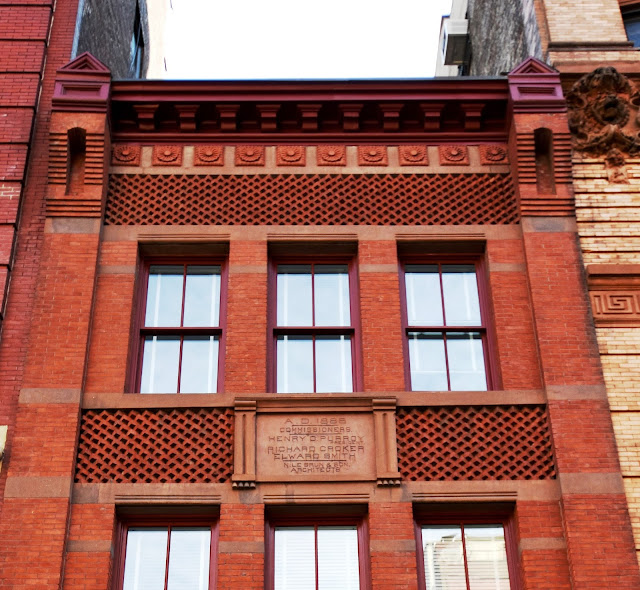 In 2009 fashion and celebrity photographer Terry Richardson paid $3.3 million for the 2,800-square-foot residence.  Through it all the building retained the signature touches which make it immediately identifiable as the work of Napoleon LeBrun.