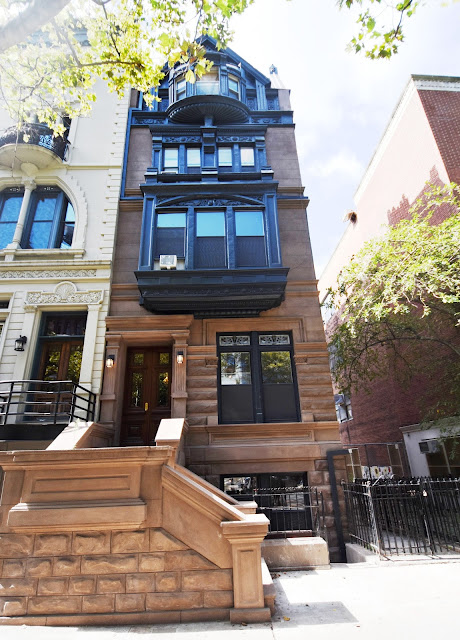 The West 78th Street block between Columbus and Amsterdam Avenues saw a flurry of building activity beginning in 1885.  Within two years the entire block would be lined with rowhouses designed in the latest residential styles--including Moorish Revival, Queen Anne, and Romanesque Revival.

In 1885 developer Charles H. Lindsley hired New Orleans-born Alexander I. Finkle to design a string of seven houses--Nos. 136 through 148.  The architect, whose name is no longer a household word, created up-to-the-minute Queen Anne homes.  Each exhibited the fanciful elements of the style--stained glass, oriels and contrasting angles and shapes.  The dwellings, completed in 1886, cost $20,000 each to build--in the neighborhood of $500,000 in 2016.

The eastern-most house in the row was No. 136.  A brownstone, dog-logged stoop led to the parlor floor where an unexpectedly traditional entrance was framed by fluted pilasters upholding a classic cornice.  Finkle added dimension to the upper floors with two metal oriels at the second and fourth floors, separated by grouped, metal framed openings at the third.  A shingled mansard, broken by the gable that embraced the deeply-bowed oriel below, capped the design. 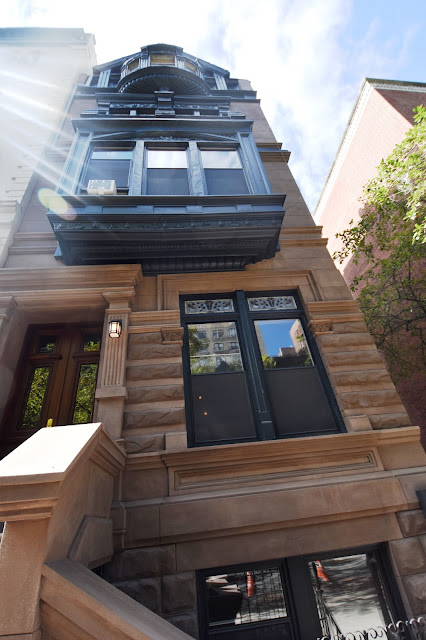 The 18-foot wide house became home to Clarence W. Lyons, who had run for Congress on the Prohibition Party ticket two years earlier.   Lyons made the long commute to his business on Kent Avenue in Brooklyn every day.  But on the morning of July 10, 1891 his routine was violently upset.

Lyons was perhaps distracted and failed to disembark the train when it pulled into his Brooklyn stop.  After the conductor, George Merk, had already put up the protective chain to prevent passengers from getting on or off, Clarence Lyons attempted to step over it.  Merk took his chain duties seriously and attempted to arrest the offender.  But Lyons was equally adamant about not being delayed.

The New York Times reported "There was a scrimmage."  But Lyons seems to have come out on the losing end.  The newspaper said "several passengers accompanied Lyons to the bridge police station in Brooklyn, and denounced the conduct of the conductor as brutal and uncalled for."  Nevertheless, Lyons was "admitted to $300 bail by Justice Walsh."


By the turn of the century No. 136 was owned by Ana Pomares and being operated as a rather high-end boarding house by Martha White.   Among Martha's best-known boarders was Dr. Mark I. Knapp, a specialist in stomach diseases, who moved in in 1904.

On September 18, 1910 The New York Times ran a startling headline which read "Says Poor Soups Lead to Suicide."  Having caught its readers' attention, the newspaper then reported on an interview with the 42-year old Dr. Knapp, in which he explained that American housewives routinely overcooked their soups, resulting in stomach problems.  "The prolonged boiling makes the soup very irritating to the stomach, often causing pain and distress and, quite occasionally, also vomiting."  In the worst cases, he explained, the patient could die.

Another of Martha White's boarders was Nellie Gadley.  The unmarried high school teacher was dismayed to find that a diamond pin was missing from her room in the summer of 1905.  She suspected a servant in the house, Ella Hayward, of taking it.  And a police investigation turned up the pin in Ella's rooms.

Nellie had to appear in court on August 27 "against Charles and Ella Hayward, both colored, whom she charged with stealing a diamond pin," reported The Times the following day.  But, having retrieved her jewelry, Nellie wanted to dismiss the charges.

Magistrate Mayo, was furious.  "I cannot discharge this woman, Madam.  I think it is time to check dishonest servants in this city, and I do not think you are doing your duty as a citizen when you refuse to press this complaint."

He was as critical of Charles as he was of Ella.  "There are too many men living on the earnings of servant girls, and who, after finding them places prompt them to rob their employers.  When caught they offer restitution to escape punishment.  I think that you should prosecute these people."

Nellie, nevertheless, refused to press charges.  So Detective Murtha, who had conducted the investigation, stepped up saying he would produce another complainant.  That surprise plaintiff was Mrs. Martha White, Nellie's landlady and Ella's employer.

The Times reported that Martha had complained to the detective "that silverware and crockery taken from her table had been found in the rooms of the Haywards, and offered to make a complaint of larceny."

Because no evidence would be found directly tying Charles to the burglaries, the judge begrudgingly released him.  Ella was held on $300 bail.

In September 1921 Ana Pomares sold No. 136 West 78th Street.  The investor resold it exactly one year later, on September 2, 1922 to esteemed surgeon Charles H. Peck, "for occupancy."  Peck died on March 28, 1927.  Five years later Cecelia Villata leased the house from his estate.  In reporting on the deal The Times noted "The lessee bought the entire furnishings of the house."

The end of the line for No. 136 as a single family house came when the estate of Charles H. Peck sold the house "to an investor" in 1946.  Rented rooms became apartments following a conversion in 1967 which resulted in one apartment per floor.


The other six houses in Alexander I. Finkle's row were demolished for a public school building, leaving No. 136 the sole survivor.  While all of the windows have been successfully brutalized--only the stained glass transoms at the parlor floor somehow survived--the outward appearance of the house remains overall intact; including the original double entry doors.