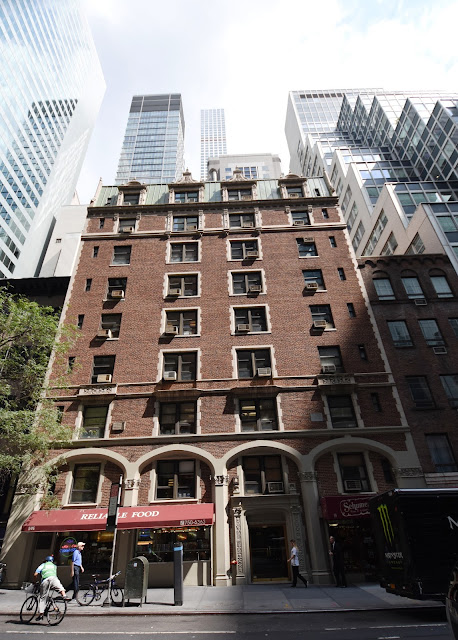 For years the three four-story brownstone houses at Nos. 59 through 63 East 54th Street had been in the same families.  In October 1922 Edward Oliver Balzer purchased the old Boles house, No. 61, “for occupancy.”  In doing so he caused a wrinkle in the plans of Frederick F. French.

The Record and Guide reported on October that “a builder” reportedly had his eyes on all three “fine dwellings.”  He had already obtained No. 59 from Mrs. Nannie H. Olyphant for $85,000 (about $1.2 million today) and No. 63 from Mrs. Charles E. Miller.  Now the publication noted “It is learned that Mr. Balzer…is negotiating with the builder for a resale.”

No matter how fine the vintage, high-stooped brownstone homes had been; they were decidedly out of date in 1922.  And modern apartments had replaced private homes as fashionable living in the 54th Street neighborhood between Madison and Park Avenues.

Fred F. French obtained the third property and his nine-story replacement building was completed in February 1923.  The Fred F. French Co. Apartment most often acted as both developer and architect.  Buildings by the firm often appeared in quaint neo-Tudor half-timbering at the time.  But Nos. 59-63 East 54th Street was a modern mix of Renaissance and Elizabethan faced in red brick and trimmed in limestone.  Stone quoins ran up the sides of the unpretentious façade and framed the central windows.  Carved balconettes at the fourth floor anticipated the geometric Art Deco influence to come.

The new building attracted moneyed residents.  Retired bachelor Arthur Thomson was among the first.  The former broker was 79 years old when the building was completed and was among the oldest members of the exclusive Union Club.

Charles Reed and his wife took an apartment here.  Their movements between their summer home in Tuxedo Park and the city were closely followed by society pages in the early 1930s.

Another wealthy resident at the time was Thomas C. Eastman, member of Eastman, Dillon & Co., investment bankers.  His summer estate was on Long Island’s Gold Coast.  Undisturbed by the gloom of the Great Depression, on June 30, 1933 he gave a supper dance for “about 200 members of the Summer colonies of the north shore,” as described by The New York Times.  Among the guests were some of the most impressive names in society, including the Cornelius Vanderbilt Whitneys, Mrs. William Randolph Hearst, the W. Goadby Loews and Mr. and Mrs. Whitney Kernochan.

Following the death of George A. Skinner on December 21, 1935, his widow Rebacca (known as Peggy), moved into the 54th Street building.  Skinner had co-founded Educational Pictures, Inc. in 1914 as a distributor of short educational and entertainment films.  But by the 1920s the firm turned to comedies; becoming the major independent distributor of short subject films.  By the time of Skinner’s death, it was producing comedy films with motion picture greats like Buster Keaton.

Peggy Skinner had enjoyed the life of the wife of a motion picture executive.  But now she was faced with “financial reverses.”  In January 1938 she sublet her apartment and moved into the Prince George Hotel at No. 14 East 28th Street.  The once elegant hotel was now mainly occupied by tourists.

The desperate widow attempted to kill herself on the morning of February 28 by taking poison and slashing her wrists.  When she failed, she jumped from her eighth floor window to her death.

The 1940s would see high-profile residents.  On October 1, 1942 Alfred Stieglitz and Georgia O’Keeffe moved in.  Stieglitz had suffered a serious heart attack in 1938 which left him increasingly weak.  According to biographer Laurie Lisle in her Portrait of an Artist, Georgia “wanted a place with a bedroom for Stieglitz that was small enough to be kept warm by an electric heater should wartime fuel rationing make that necessary.”

In 1939 Beatrice Ashley Chanler had moved in.  She was the widow of William Astor Chanler--celebrated African explorer, soldier and former Democratic Representative in Congress and a great-grandson of John Jacob Astor.  He died on March 4, 1934.  Beatrice was no less well-known.

The former actress had begun her career as Minnie Ashley and was discovered by De Wolf Hopper in 1895.  After marrying Chanler, she gave up the stage and turned to sculpting, producing portrait busts and bas-reliefs.  The bas-reliefs in the Hotel Vanderbilt were her work.

Her extraordinary war relief efforts had earned her the French Legion of Honor.  She founded the Lafayette Preventorium, Inc. in 1917.  The institution tended to French children, many of them “pre-tubercular” and malnourished.  She toured war-devastated areas of France for the Federation of American Agencies for France in 1919.

When ill health forced her to give up sculpting, Beatrice turned to historical writing.  Among her works was the 1934 Cleopatra’s Daughter: Queen of Mauretania.

When war again broke out in Europe, Beatrice Chanler again offered her services.  She was the president of a Greek relief organization and of the Committee of Mercy, Inc., and chairperson of the Ambulances for Our Army Committee, chairperson of the Salvage for Defense Division of Bundles for America, and an organizer of the British Civil Defense Emergency Fund.

Beatrice was notified that she would be decorated by the Greek Government for her efforts.  But she would not live to receive the award.  While on a train to her summer home in Islesboro, Maine, on June 20, 1946, she quietly died.

In 1959 the building’s owners, Leonard S. Kandell and Myron Eisenstein, commissioned architect H. E. Feldman to convert the upscale apartment house to an office building.  Feldman and interior decorator Eugene Stephenson surprisingly left many of the interior residential features intact.  The New York Times noted on November 27 that year, “Many of the building’s offices…have wood-burning fireplaces.”

Storefronts were installed at street level, but otherwise Fred F. French’s reserved façade was little impacted.  Interestingly, Feldman and Stephenson gave the office building a “homelike lobby.”  The Times said the owners were “mindful of the desire of many business men for homelike décor in their offices.”  In response they decorated the lobby with “upholstered furniture, window draperies, plants and rugs on the marble floor.” 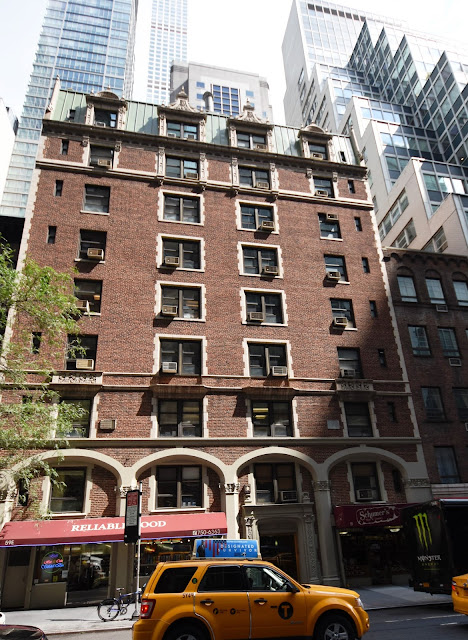 Fred F. French’s 1922 building draws little attention on East 54th Street; and few who pass by would guess that wealthy New Yorkers once came and went from their summer estates or that two of America’s greatest creative talents—Stieglitz and O’Keeffe—once lived here.