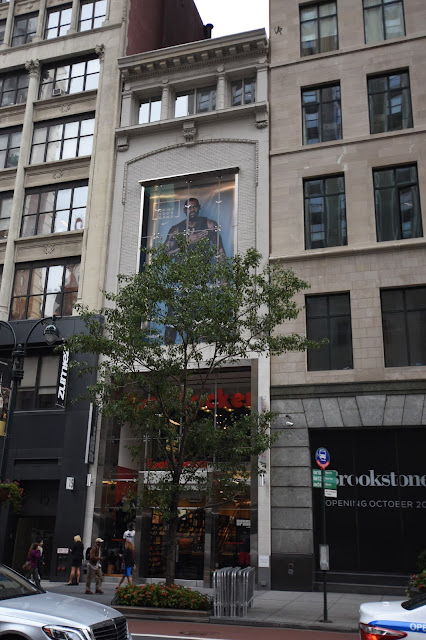 The 25-foot wide home of Warren Ackerman was erected in one of the most exclusive residential neighborhoods of Manhattan.  At No. 11 West 34th Street, it sat only half a block from the brownstone mansion of William B. Astor at the corner of Fifth Avenue.  Four stories tall above an English basement, it was designed in the Gothic Revival style--somewhat unusual for New York residential architecture.

A land-owner and cement manufacturer, the vastness of Ackerman's fortune was evidenced in his donation of $50,000 to the Marble Collegiate Church.  At the time of the 1889 Johnstown Flood residents worried about the stability of the Feltville Dam, owned by Ackerman.  The Evening World reported on August 2, "Warren Ackerman, who owns nearly all of Scotch Plains and the mountain back of it, has a gang of men working night and day strengthening the great dam."

The Ackermans' residency on West 34th Street was drawing to a close at the time.  The following year Caroline Astor's nephew, William, demolished his mansion at the corner of Fifth Avenue and 33rd Street and began construction of the Waldorf Hotel.  It was the first major incursion of commerce into the neighborhood.

By the time the Waldorf opened in 1893, the Warren Ackerman and his wife had moved on, now leasing their home to high-end boarders.  Among them were Dr. Edwin G. Freligh and Captain William G. Winans, described by The Evening World in 1893 as "the well-known and wealthy clubman and ex-National Guardsman."

In 1898 real estate operator William J. Roome leased the house from Ackerman's widow.  On July 2 The Estate Record & Builders' Guide noted "The building will be altered for store office and bachelor apartments, and when completed Mr. Roome will occupy the store floor as a real estate office."


The Guide described the newly-converted structure in January 1899.  "The three upper floors of this building have been divided into bachelor apartments of differing sizes, though all possessing those accommodations and conveniences that are now considered necessary in apartments of this class...The rooms are tastefully decorated, and contain mirrors, mantels, open fire-places, hard-wood floors, electric bells, speaking-tubes, gas and electric light fixtures, etc."

William J. Roome, whose father started his real estate business in 1852, stayed on in his renovated building until 1907 while the block continued to change.  By now it was hemmed in by the Samuel Green department store building to the west, and James McCreery's massive department store to the east.

That year American Architect and Architecture announced that Benjamin W. Levitan "will make plans for the erection of a fireproof, iron-front six-story business building" on the site, with an estimated cost of $400,000.   Those plans never came to fruition, however.


On August 26, 1908 The American Architect and Building News announced a change in plans.  The Eleven West Thirty-fourth Street Company, headed by Frances A. Harris, had hired architect David M. Ach to design a six-story commercial building to replace the old Ackerman mansion.

Ach designed the skinny brick and stone emporium building with expanses of glass which would provide the selling floors with natural light.   The restrained Beaux Arts design featured carved swags and wreaths, and a delicate draping of bellflowers which outlined the upper portion of the gentle, three story arch in the central section. 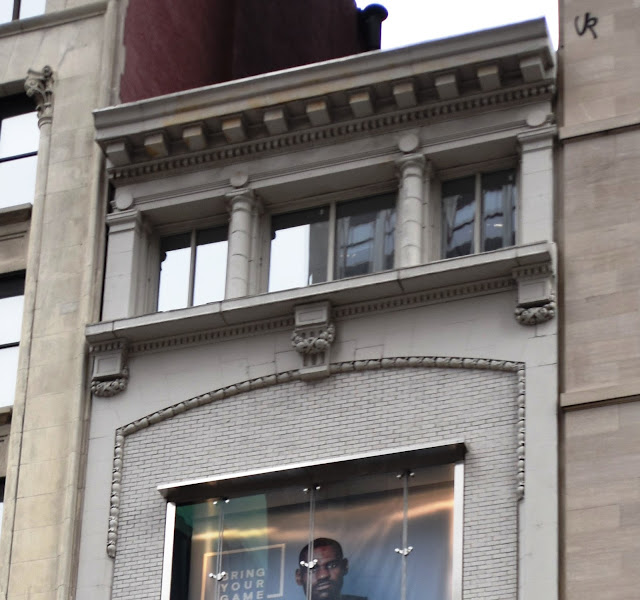 The building was completed in the spring of 1909 and quickly found a tenant.  On April 10 The New York Times announced that Frances Harris had leased the new structure to "the suit and gown concern known as 'Schreiber's.'"  The aggregate rent of the 20-year lease was $800,000, described by the news paper a "a new high record for Thirty-fourth Street."

The retailer of expensive women's apparel, however, may have been overly optimistic in its ability to meet the high rent.  Just two years later, in March 1911, the store held its going-out-of-business sale.  Schreiber's advertised "Afternoon and Street Dresses" described as "Foulard, French Challies, Organdies, Gingham and all over Embroidered Marquisetts dresses with Cluny lace trimming" which had formerly been priced at $22.50 for just $8.90.  Even at the cut-rate sale price, the customer was paying about $230 in 2016 dollars.

Frances Harris moved his offices into the building, renaming it the Harris Building.  He now leased it to several tenants, the most important being La Resista Corset which took the second floor in 1912.  The firm announced that the space "is to be used, after extensive alterations, as a wholesale and retail showroom."

Joining La Resista Corset in the building that same year were the Eureka Vacuum Cleaning Company's store and the Schrafft Company, which took the store and basement.  Schrafft's restaurant paid Harris $21,000 a year for the space; more than $44,000 per month in 2016.


The irony of sharing the building with a corset retailer apparently did not occur to the New York County Woman Suffrage Association when it rented offices in 1914.   Other tenants in the World War I years included the Rosenbach Shoe store and A. Morton Oppenheim women's clothing store, both doing business here by 1917.  Among Oppenheim's expensive clothing line in its "four upstairs salesrooms" were "seal plush coats," in 1921.

Schrafft's restaurant was still at street level as late as 1922.  During the Great Depression Henry Tannenbaum's leather goods business took space, and on February 1, 1937 The Wise Shoe Company opened a new store in the building.  Before moving in the shoe retailer remodeled
Edwardian storefront.  The Times noted "It is air-conditioned and has an exterior of modern design in stainless steel and bronze."

The 1937 renovation was not the last; but none would so far-reaching as the 2011 make-over for Foot Locker.  The ground and second floor facades were removed to accommodate a modernistic glass fronted atrium-type retail space; and an expansive window replaced the upper floor openings within the shallow arch.  The opening announcement noted that the second floor, once home to a corset company, would now feature "a House of Hoops shop."