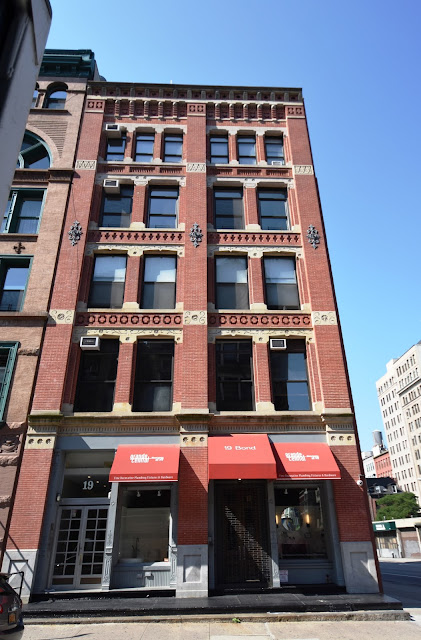 In 1850, when Peter Tostevin began his business as a builder, wealthy importer Lewis Baker lived at No. 19 Bond Street.  Baker’s office was at No. 124 Pearl Street and he had lived in his wide mansion since 1833.  Known popularly as “Looe,” Baker would remain here as late as 1854.

But the once exclusive residential Bond Street had severely changed by 1879.  The former mansions, some of them faced in marble, were converted for business purposes (there were more dentist offices on Bond Street than anywhere else in the city) or simply razed for modern loft buildings.  That year Boutin & Smith purchased the old Baker property—extending back to Shinbone Alley.  (Rather disappointingly, Shinbone Alley was later changed to the less colorful Jones Alley.)

Although Peter Tostevin was best known as a builder and contractor; for the Boutin & Smith project he would double as architect.  It was most likely his last commission. The 52-year old died suddenly on December 8, 1879.  In 1880 his business became Peter Tostevin Sons when Henry M. and Peter L. P. Tostevin took over their father’s firm.

The five-story, neo-Grec structure was completed in 1880.  Tostevin had designed a cutting-edge structure of red brick, trimmed with limestone.  He brightened the often dour architectural style with florid incised carvings, carved rosettes and Queen Anne-inspired brickwork within the spandrels and the corbels below the cornice.

The building became home to the New York City branch of the Chicago-based A. H. Andrews & Co.  Founded by Alfred H. Andrews in 1865 it was now the largest of Chicago’s furniture manufacturers, focusing mainly on school furniture.  As well as making cast-iron based school desks, it produced globes, chalkboard erasers, blackboards and other educational “furnishings.”

Another school furniture manufacturer shared the building.  Baker, Pratt & Co. advertised “Apparatus and Furniture of all kinds for Schools, Academies, Colleges and Halls,” in 1881.  But when the firm “dissolved by its own limitation” on December 31, 1884, it was taken over by A. H. Andrews & Co.

In its 1888 catalogue, A. H. Andrews & Co. noted “Equally important it is that everything which contributes to the cheerfulness and comfort of the school-room—where so much time and effort are expended in acquiring knowledge and mental discipline—should be of the very best quality and comprise the latest improvements to be obtained, thereby producing the largest and most valuable results, making study and instruction less of a task and more of a pleasure.”

The firm came under suspicion of corruption in 1886 when the School Board sought proposals “for fitting and furnishing the new grammar school house, No. 83” on East 110th Street.   The specifications included carpeting, chairs, teachers’ desks, slates, pupils’ desks and other school necessities.  Nathaniel Johnson, maker of church and school furniture at No. 490 Hudson Street underbid A. H. Andrews & Co. by several hundred dollars.  But Andrews received the contract.

Irate, Johnson went to the media.  He alleged to The New York Times that Andrews & Co. “get a majority of the contracts given out by the Twelfth Ward Trustees, as well as in other wards, often when bids lower than theirs have been submitted.”  He accused “the firm has the favor of the Teachers’ Association of the city, and that that is a potential influence.”

A School Trustee, David H. Knapp, tried to explain.  He said that while Johnson came in cheaper, he had previously provided furniture and supplies which had “not been altogether what was wanted.”

Despite the apparent success of A. H. Andrews & Co., the firm entered bankruptcy in the early 1890s.  It was replaced in No. 19 Bond Street by textile and apparel related firms, like Hugo Maul & Co., dealers in “braids, chenilles, skirt cords, dress trimmings and tassels,” which was here  in 1890.

At the turn of the century the Manhattan Cloth Examining, Sponging, and Refinishing Works was in the top three floors.  The second floor held the laundry operation of Wilck & Co.

The sponging and refinishing firm utilized flammable liquids in its operation, and a fire broke out on the fourth floor on January 11, 1902.  It was extinguished, but not before causing $2,200 damage.  Two weeks later, on January 26, repairs were being made when, around 2:00, Engineer Mallon discovered another fire.  On the third floor the bookkeepers and office staff were working, while other employees were on the top floor.  One of them, Richard Crotty, was deaf.

The fire quickly turned into a roaring blaze.  As the workers scrambled to escape, Richard Crotty was unaware of the danger, unable to hear the cries of “fire!”  The New York Times reported “When the smoke rolled up from the fourth floor he became bewildered, and was going to jump.”  Luckily, his employer, John W. Fleck, realized he was still in the building and rushed back to rescue him.

When firefighters arrived, they were hampered by the subway excavation on Elm Street (later Lafayette Street) beside the building.  The men “had to jump, dragging their lines of hose and wading through mud and water, until they got a forty-foot ladder placed.”  By now the flames were shooting out of the upper windows.  “They made the Italian laborers in the subway help carry the hose lines, and the situation was very grave when the men of Hook and Ladder Truck No. 3 finally started up the fire-escape in the rear of the building.”

Bricks rained down on the fire fighters on Shinbone Alley.  The massive blaze was finally extinguished after causing an estimated $25,000 in damages –more than $700,000 in 2016.  The Times said “Firemen rarely have had a harder task in getting to work than they did yesterday afternoon.”

Chief Edward Croker pointed blame at the police who, he claimed, were rarely on their beats.  “If the police had been doing their work or staying on their walk this fire would never have got such a headway as it did.”

The police were on their beats two years later; or at least Detectives Peabody and Clark were.  At around 4:00 on the morning of October 21, 1904 they heard “soft whistles” coming from Shinbone Alley.  The detectives recognized it as a common signal from a lookout to his burglarizing confederates.   Just a few days earlier Gerson & Marks had been robbed of $3,000 worth of silks from No. 19 Bond Street.

The detectives hid in the shadows and when the whistler emerged from the alley, they grabbed him.  “They caught him, but let him go when he pleaded he was doing nothing wrong,” reported The Times.  But when he rushed off they again became suspicious.  Under the back door of No. 19 Bond Street was a piece of white paper—another common signal used by burglars in what was known as “a nighthawk express.”

From within the building the detectives could hear the heavy thud of bundles falling down the elevator shaft.  They called for reserves and 16 more policemen slipped into the shadowy Shinbone Alley.  The door was broken in and after a long search, three men were found hidden in the dark building.  The Times noted “They wouldn’t come at first, and were thoroughly clubbed.”

The 35 rolls of cloth they were preparing to steal were worth $2,500.  The goods belonged to Gerson & Marks who had just been robbed.

Throughout the war years the building continued to house apparel, textile and millinery firms.  In 1916 Hansen Bros. “women’s hats,” was here; as was Hirsh & Guinzburg, “manufacturers of Ladies’, Misses’ and Children’s straw and fur felt hats.”  By 1919 Russell & Allen, furs, was here as well as Mill Remnants Co., makers of “cleaning cloths.”

The Standard Electric Novelty Company was on the third floor in 1926.  Every Saturday afternoon the firm’s payroll was delivered, a fact that came to the attention of three young crooks, Vincent Napolitano, James Diodato, and Frank Cerasani.   Cerasani was just 17 years old, his accomplices were both 20.

Around noon on Saturday, March 27 that year policeman Lewis Colton was at the corner of Lafayette and Bleecker “when his attention was attracted by the furtive actions of the trio,” according to The New York Times.  He followed them to No. 19 Bond Street where they loitered around the doorway.  When he approached them to asked what they were doing there, he noticed the bulge of a firearm in Napolitano’s waistband.

The newspaper reported “he went into action without asking questions.  His first blow felled Napolitano.  Then he dropped Diodato with a straight right to the point of the jaw.  Cerasani was reaching for a weapon when the policeman’s fist caught him.”

Bond Street was filled with Saturday workers and “there was much excitement.”  Another policeman arrived to find Colton fighting off the three thugs.  Each of the would-be robbers carried weapons.  Finally subdued, they admitted they were waiting to steal the Standard Electric Novelty payroll.

Police vigilance paid off again on July 20, 1935 after 22-year old Joseph Sansone broke into the building by tearing loose boards away from the loading platform in the rear.  After burglarizing the woolen goods firm of Gerofsky Brothers, he started to leave; but was spotted from the street.  Trapped inside, he soon found the building surrounded by policemen.

After awhile he was seen leaping across the areaway to the rooftop of No. 21 Bond Street, where he “attempted to shinny down a fire escape.”  A newspaper reported “He came down into the arms of the police.”

Ironically, it turned out that burglar was the son of barber Joseph Sansone.  For two decades the senior Sansone had been the “favorite barber” of Herman Gerofsky, principal of Gerofsky Brothers.  Despite being caught with stolen goods, Gerofsky refused to make a complaint against the young man.

The last quarter of the 20th century brought further changes to Bond Street and the Noho neighborhood in general.  In 1989 No. 19 was converted to joint living and working quarters for artists.   The struggling artists who lived in the building then would surely be unable to make the $10,000 per month rent necessary to lease the penthouse in 2014. 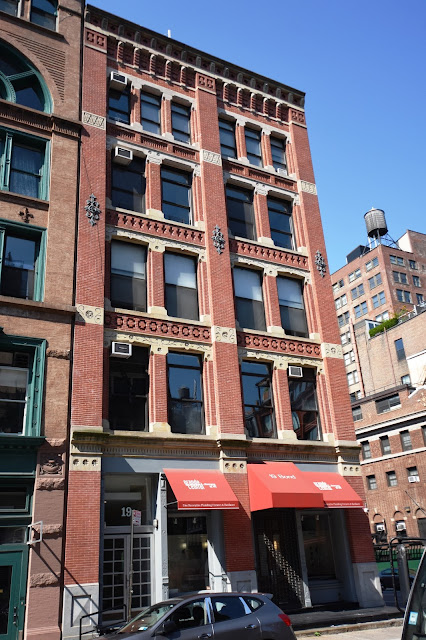