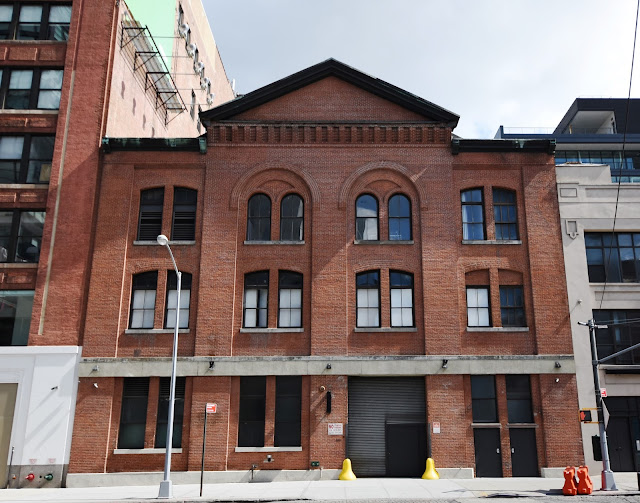 Despite his storming off to England with his family in 1891--the result of a heated feud with his aunt, Caroline Schermerhorn Astor and contentious business relations with his cousin, John Jacob Astor--William Waldorf Astor continued to conduct business in New York.  He had inherited a significant amount of property on the west side dock area, and on June 14, 1892 The Real Estate Record & Builders' Guide reported his intentions to erect a brick stable building on West 14th Street for the New York Biscuit Company.

Astor commissioned Thomas R. Jackson to design the stable.  By now Jackson was prominent among the city's architects.  Born in England, he had worked in the offices of Richard Upjohn and was one of the designers of the rebuilt Trinity Church in 1839.

For this project he turned to the Romanesque Revival style.  Jackson avoided the chunky medieval columns and massive rough-cut stone arches popularized by Henry Hobson Richardson, relying instead on refined symmetry, shallow recesses and two three-story arches.  Restrained decoration, like the eyebrows and sprandrels of the arches and the complex corbels below the triangular pediment were executed in brick.

Even as his 14th Street building was being constructed, Astor attempted a bizarre final break with New York City.  In the summer of 1892 newspapers received word that he had died from a sudden attack of pneumonia.  Before long, however, his supposed death was exposed as a ruse to disappear from public view and William Astor was widely derided in the press.

The stable was completed early in 1893.  Astor had put contractor Hugh Getty in charge of construction  On April 22, 1893, the Record & Guide said he had "an excellent record for first-class work" and noted "He has just completed the stables for the New York Biscuit Co., 14th to 15th streets and 10th avenue."

The New York Biscuit Co. used the stable to house its fleet of drays and teams of horses.  The same year that the firm moved in, King's Handbook of New York City called it "by far the greatest producer in the world of biscuits, or crackers."  The well-chosen site near to the docks and railroads enabled efficient shipping.  King's Handbook said "It supplies its widespread trade by means of teams, railroads and vessels; its products reach all civilized parts of the world."

The bakery continued to grow by merging with its greatest rival, the American Biscuit Co, in 1898.  That firm was nationally-known for its brand names Premium Saltine and Fig Newton.  Brilliant national marketing and careful introduction of new products--like Uneeda Biscuit crackers--advanced its massive success.

In 1919 National Biscuit began buying up the many properties in the area which it had been leasing from the Astor estate for so long.  By January 20, 1920 it had not only purchased what was now described as the "three-story garage" on West 14th Street, but the entire square blocks from 15th to 16th Streets from Ninth to Tenth, and Tenth to Eleventh Avenues.  The Real Estate Record & Guide placed the "total investment by the Biscuit Company in this location of about $10,000,000."

The gritty neighborhood of warehouses, meatpacking factories and riverfront docks was the haunt of gangsters in the 1920s and '30s.  On the night of January 29, 1937 Patrolmen Gerald Brandy and Charles Krouche were patrolling on West Street when they heard a gunshot.  Seeing a large black sedan speeding along Washington Street, they pursued it in their radio car.

The auto collided with a taxi, then veered onto the sidewalk and crashed into the National Biscuit garage.  The left rear door flew open and a body rolled out onto the pavement.

The unidentified man had been shot through the heart.  A 29-year old female passenger, Mary Higgins, was taken prisoner to St. Vincent's Hospital with a broken arm, and the diver, 30-year old longshoreman James Lavin was taken to the Charles Street police station.

Two days later detectives had identified the dead man as another longshoreman, 36-year old Ralph Clements.  His police record reflected 14 arrests and several terms in Sing Sing.  "He had been questioned in connection with the murder of the widow of Jack (Legs) Diamond three years ago in Brooklyn," noted The New York Times on January 31.

Both Clements and Lavin, who had met in prison, were described by police as "petty racketeers."  The Times reported "The police are trying to determine whether the two men had a dispute concerning their racketeering activities along the waterfront."

How "petty" the men's criminal careers were was debatable.  Lavin admitted he "had been sentenced to seven to fifteen years for killing a man in 1924; that he had escaped from Sing Sing; that he later had been arrested for robbery, and that he recently had been on parole."

In 1941 National Biscuit Co. became Nabisco.  By now it had added Oreo cookies and Animal Crackers to its extraordinarily successful list of products.  The firm moved its operations to New Jersey in 1958, selling the former stables to the Industry City Realty Co. that year. 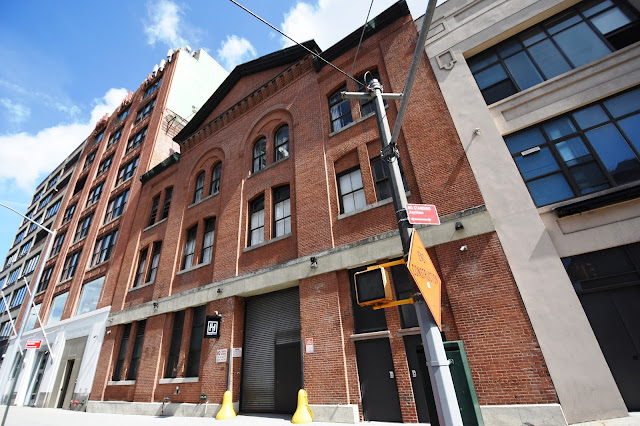 For years the impressive brick structure was used as a warehouse for companies like Saks & Co.  As the Meatpacking District changed from warehouses and butchery firms to one of upscale shops and restaurants in the late 20th century, the building was purchased by Ceco Studios, LLC. in 1995.  Behind the handsomely-restored facade, Ceco Studios operates the High Line Stages, touted as Manhattan's two largest sound stages.