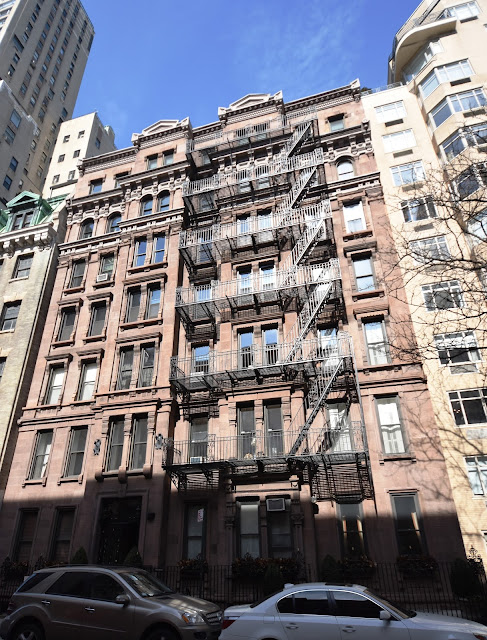 On June 3, 1882 the Real Estate Record marveled at the number of apartment buildings being built in Manhattan.  The test period for apartment living was over and New Yorkers embraced the convenience of “flat-houses” with gusto.  “Unless all the indications are deceptive, before five years are over New York will have the largest and best appointed apartment houses in the world.  Every week some new plan is filed, and the last design has some attractive novelty not thought of when these great establishments were first erected.”

The journal pointed out amenities designed by developers to lure potential tenants: one Madison Avenue “Paris flats” would have a rooftop garden; “another proposes to have a Turkish or Russian bath for the use of its inmates.”  The article listed a page of buildings under construction, including the massive Navarro, the Dakota, and Frederick Aldhous’ “seven-story brown stone” building at Nos. 55-57 East 76th Street.

Only three months earlier Aldhous’ architect, Frederick T. Camp had filed the plans.  The Real Estate Record noted at the time “The feature of this house will be an interior court which will furnish light and ventilation to the centre of the house.”  Completed in 1883 at a cost of $90,000—about $2.2 million in 2016—The Imperial, as it was called, offered residents the latest in luxury. 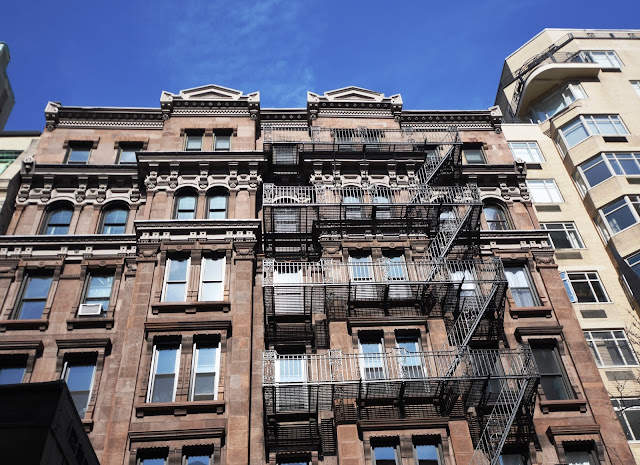 The 19 apartments featured “ventilating iceboxes” which opened to the outside, eliminating the need of ice in the coldest weather; tile-lined gas fireplaces with oak mantels and bathrooms with “porcelain flooring.”  An advertisement in the New-York Tribune offered “seven, ten, and fourteen room apartments.”

Just one block east of fashionable Fifth Avenue and Central Park, Camp had clad his neo-Grec structure in traditional brownstone; designing it to meld comfortably among the still-existing rowhouses on the block.  Two slightly-projecting bays provided dimension to the façade which was adorned with incised decorations, carved cornices above the openings, limestone trim and iron cresting.

The Imperial filled with moneyed residents whose lifestyles mirrored other socially-prominent New Yorkers.   Many of the apartments sat vacant during the summer as their occupants left for country estates and resorts.  Their wide-range of occupations is evidenced in a handful of the early renters.  Richard Schramm was appointed a Commissioner of Deeds in 1897, Michael Joseph Corcoran was a broker; the Rev. Thomas P. Hughes was rector of the Church of the Holy Sepulchre on 74th street near Park Avenue, and author of several books including The Dictionary of Islam; and William L. Sonntag was a well-known landscape artist.

Sonntag had been elected an academician of the National Academy of Design in 1861 and was active in the American Water Color Society.  At the age of 78 the artist developed lung problems and he died on the morning of January 22, 1900 in his apartment here.

Owners of the Imperial initially had problems.  The building was sold in foreclosure in September 1894, and resold in 1905.  The new owner, real estate operator William Buhler, set off on a marketing campaign that included renaming the building.  Despite its undeniably brown color, he dubbed it La-Casa Blanca—The White House.

After a few months of refurbishing, Buhler flooded the newspapers with advertisements, hawking “electric light, telephones in each apartment; all night elevator; handsome entrance with marquise; door boys.”  Tenants, who “can select decoration,” would expect to pay rents from $1,200 to $3,500 a year—a substantial monthly rent of about $7,900 for the most expensive apartment in 2016 dollars.

The wealthy Helen C. Mostyn was twice widowed.  Her second husband, Berkeley Mostyn (deemed by The Times “an Englishman of good family”) died around 1907.  By 1909 Helen lived here with her unmarried daughter, Alexandra Stevens.  Social pages followed the mother and daughter as they came and went, traveling abroad to often exotic locations like Algiers.

Socialites were updated on their movements by announcements like that in The New York Times on October 6, 1910.  “Mrs. Berkeley Mostyn and her daughter, Miss Alexandra Stevens, will open their apartment, 55 East Seventy-sixth Street, on Nov. 7.”

As Helen and Alexandra came and went, other tenants in the building included two judges, city magistrates Robert C. Cornell and Joseph E. Corrigan; Dr. Walter Lindsay Niles and his wife, Louise, and Christian Blancard described by The Times in 1912 as “for more than thirty years one of the leading manufacturers of jewelers’ findings.”  Also living here in 1912 were Loring Townsend Hildreth, Consul General from Siam and an Assistant Corporation Counsel to the City of New York, and his wife, the former Augusta Warner Miller.

Dr. Wheeler was editor of Current Opinion and literary advisor to Funk & Wagnalls Company.  The first president of the Poetry Society of America, had founded the Literary Digest, and was also a governor of the National Arts Club.  A widower, he shared his apartment with his bachelor son Curtis Wheeler, a World War I flying ace.

Curtis had graduated from Yale in 1912 and served with the field artillery on the Mexican border in 1915.  As the United States entered World War I he was transferred to the Air Corps in 1917.  While in France he shot down three German planes, winning the Distinguished Service Cross, the French Croix de Guerre, and the Belgian Order of Leopold.

In the spring of 1922 the senior Wheeler showed signs of a baffling ailment.  Doctors were unable to diagnose the problem and in the beginning of May he was moved from East 76th Street to Lake Placid “in the hope that the change might benefit his condition,” according to the New-York Tribune.  It did not.

Although his physicians did not believe his condition to be life-threatening, Dr. Wheeler died on July 15 at the age of 63.  The following day the New York Herald noted that “His body will be sent to-day to his home, 55 East Seventy-sixth street.”

Lt. Curtis Wheeler continued to live in the apartment.  He followed in his father’s footsteps and by 1927, now 36 years old, he was associate editor of the Sunday magazine section of The New York Daily Tribune.  But despite his journalistic profession, Wheeler continued to assist the Air Corps.

In July 1927 he traveled to Watertown, New York to help train recruits.  He and 26-year old Lt. Carl J. Sack, also from Manhattan, climbed into a 1915 Curtis J N-4 army biplane on the morning of July 6 during field artillery and infantry maneuvers.  At 11:05 their craft crashed, killing Wheeler instantly.  Sack died in the ambulance on the way to a hospital.

Among the more celebrated residents in the building by 1937 were Raymond Brown and his wife Gertrude.  Brown was a well-known illustrator, author and art editor.  He had been art director of Everybody’s Magazine, publisher of Ridgway’s Magazine, and art director and vice-president of the Hawley Advertising Company.  Among his best known books was his 1915 How It Feels to Be the Husband of a Suffragette.

Indeed, Gertrude Foster Brown was both a concert pianist and a women’s rights activist.  She had been incited into her suffragist work when she heard a judge comment that women would have the right to vote if they weren’t “such fools.”  She led state-wide barn-storming lectures, founded the Woman’s Suffrage Study Club, and organized “the series of colorful, persuasive suffrage parades and demonstrations that enlivened New York City before World War I,” according to The Times.

On January 9, 1937 Gertrude hosted a luncheon for the 78th birthday of suffragist Carrie Chapman Catt.  During the event, Carrie told a reporter that it would probably take another generation “or so” for women to “find their place in the world.”  She added that she was “neither disappointed nor discouraged about the participation of women in public affairs.  They are behaving just as I thought they would.”

Ray Brown died in the apartment on April 30, 1944 at the age of 78.  He had been ill for several months.  Gertrude soon unofficially retired from public life, focusing on music.  She organized a chamber music group that played in the 76th Street apartment.  She remained in the building until her death on March 2, 1956 at the age of 88. 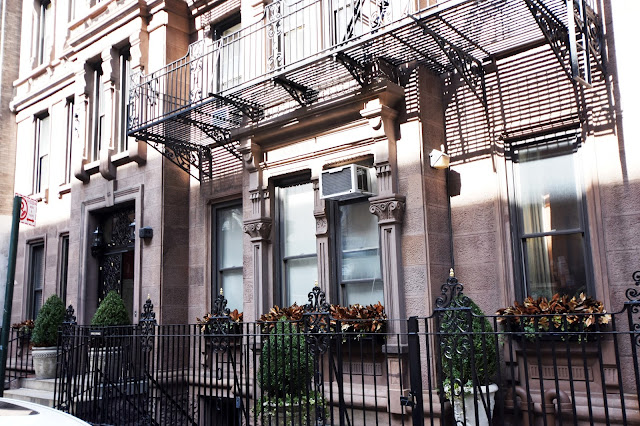 Throughout the second half of the 20th century, Victorian apartment buildings were modernized and broken up into smaller units.  Somehow the original floor plans at Nos. 55-57 East 76th Street survived; which in many cases preserved the interior elements—mantels, parquet flooring, and window surrounds, for instance.

In 2004 the co-op initiated a façade restoration with the architectural firm Walter B. Melvin.  The  brownstone survivor of the heyday of Victorian apartment construction is a delightful and charming relic.