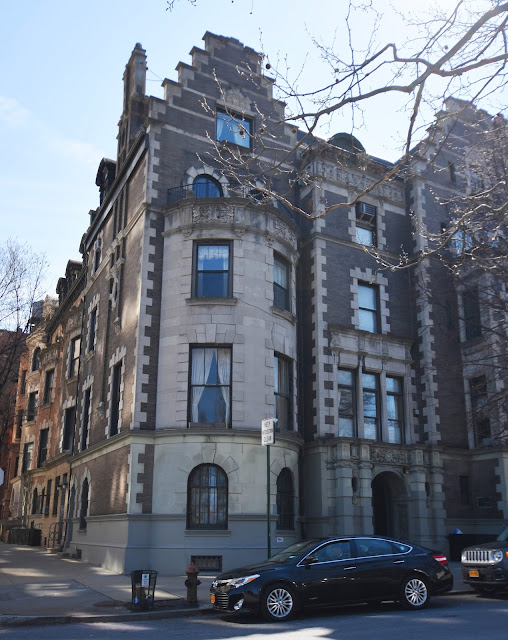 In 1897 True completed the block of mansions on Riverside Drive, between 76th and 77th Streets (except for No. 42, designed and built by Charles Buek).  The row terminated with No. 46 at the corner of 77th Street.  True blended the Elizabethan and Renaissance styles, and then grafted on Flemish Renaissance Revival stepped gables as the crowning touch.  The resulting upscale residence was both playful and distinguished.

True designed the Riverside Drive façade as two distinct pavilions.  The double doors sat within a hefty, ornate entrance embellished with carved panels, oval windows and banded Ionic pilasters.  The brown brick of the square southern bay was highlighted by limestone quoins and decorative panels.  The northern bay featured a three-story stone bay that swelled away from the brick façade.  True placed the servants’ entrance around the corner, with its own address, No. 340 West 77th Street.  No less interesting than the Riverside Drive elevations, the side boasted stone Gibbs surrounds, an oval stained glass window and a complex, eye-catching chimney.

The newly-completed house was sold to Frank Johnson Goodnow and his wife, the former Elizabeth Buchanan Lyall, on February 23, 1897.  The 38-year old had an impressive education, having studied at the Ecole Libre des Sciences Politiques in Paris, the University of Berlin, and graduated from Amherst College and Columbia Law School.  By the time the Goodnow family moved into the Riverside Drive house he was Professor of Administrative Law at Columbia.

The family (which included daughters Isabel and Lois and son David) maintained a summer home in Norfolk, Connecticut. Despite their comfortable financial position, the Goodnow name rarely appeared in print because of dinners, receptions and teas.  Instead it was Frank J. Goodnow’s astounding career that made headlines.  In the first years of the century Governor Theodore Roosevelt appointed him to the commission tasked with drafting a new charter for Greater New York; and President William Taft named him to his Commission on Economy and Efficiency.

In 1910, the same year that Isabel’s engagement to E. Kendell Gillett, was announced, her father held the position of Chairman of the Committee on Congestion of Population in New York.  Mayor William Jay Gaynor made him a member of his “official commission to investigate the congestion of population in the city” that year.  Gaynor instructed the members to “investigate city crowding.”

Early in 1913 Frank Johnson Goodnow was appointed by the Chinese Government as its advisor “in the reform of the constitution,” according to The New York Times on March 14.   Frank, Elizabeth and Lois traveled to Peking; while David who had recently graduated from Columbia, stayed home to practice law.

Later that year, on August 3, David married Margery Smith.  The Smith family lived at No. 829 Park Avenue; and the wedding took place at their country estate, the White House, at Ballston Spa, New York.  Conspicuously absent at the ceremony were the groom’s parents.

Although Lois had taken the long voyage home for the wedding (she was maid of honor); The New York Times simply explained, “Mr. Goodnow’s parents...are both in Peking, China.”
.
David purchased a house in upscale village of Pelham Manor where he and Margery lived following their honeymoon.

The Goodnow family would not reside much longer in the Riverside Drive mansion.  On May 20, 1915 Dr. Frank Goodnow was inaugurated as President of Johns Hopkins University in Baltimore.   He, Elizabeth and Lois had already relocated to Maryland.  Eleven days after he officially took office The New York Times reported that the Riverside Drive house had been leased to Elmer Enfield.  Interestingly, David’s wife was now listed as the owner.

David Goodnow had no intention of ever returning to Riverside Drive and by 1919 he was renting it as unofficial apartments.  Calling it “The Greymore” an advertisement boasted its “high class appointments of about 30 suites.”

Goodnow’s tenants seem to have had problems keeping track of their belongings.  On May 14, 1919 an advertisement offered a “generous reward, positively no questions asked” for a silver fox scarf left in the Astor Theatre the previous Saturday night.  The owner noted it was the “parting gift of brother wounded in France.”  Miss Kittredge lost Togo, her gray and brown dog at 11 p.m. on June 18, 1920.  And on February 26, 1922 a resident named Russell advertised for a lost “envelope shape purse, containing diamond ring, unusual design, square setting.”   Although Ms. Russell noted that the ring had 32 diamonds, she insisted it was “valued for sentimental reasons.”

David Goodnow sold everything in his family home in a two-day auction in June 1920.  Included in the sale was a Steinway piano, “period design” bedroom suites, china, silver, and even the “electroliers.”  Rather surprising (and disgusting) to 21st century minds was his offering “like new superior mattresses.”

Within the year he had converted the mansion into “non-housekeeping apartments;” meaning they did not have full kitchens.  An advertisement in the New-York Tribune on September 11, 1921 offered “2 Large Rooms with Bath and Kitchenette.”  David F. Goodnow continued operating the house as an apartment building after he formed the 46 Riverside Drive Corp. as owner with two other investors in 1937. 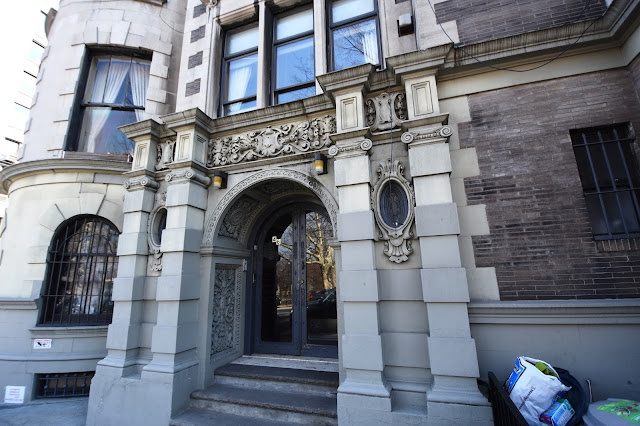 One apartment in the building played a part in a vicious contest of operatic wills in 1942.  Resident Hans Busch was stage director for the New Opera Company which was staging a production of Verdi’s Macbeth that December.  Busch’s artistic sensitivities were pitted against the egoistic demands of a diva and the battle centered around a red and purple velvet costume.

Soprano Florence Kirk, who had the role of Lady Macbeth, loved the purple gown with red trim and pearl-embroidered sleeves.  She deemed it “luscious” and insisted on wearing it in the first act.  Busch refused to allow it.  The Times said his “contention is that the costume does not match the setting or atmosphere of the first act either in style or color.  The set, with its somber grays and greens, requires a dark costume…Also, he says, there is a primitive feeling to the scenery and the dress ‘if it is any style at all, is Renaissance.’”

To make sure Florence did not disobey him, before opening night, Wednesday, December 2 Busch hid the velvet gown in an unused dressing room.  He was shocked and angered when she appeared on stage wearing the prohibited costume.  The Times said “Having found it, she wore it.”

Tempers simmered and when Florence started on stage to make a curtain call following the second act, Hans Busch restrained her.  “He says he only took her wrist,” said the newspaper.  “She says he dug his fingers into her arm.  At all events her nerves snapped.”

The operatic diva landed a blow on Busch’s face.  Later she said “I gave him one, I admit.”

The next performance was not until two nights later.  When Florence arrived at the theater around 6:45 p.m. she found the dust sheet that protected her costumes had been “whipped back” and the velvet gown was missing.  A frantic search provided no results and “Miss Kirk began to get excited,” said The Times.

About an hour later Hans Busch appeared.  “He cheerfully admitted that he had taken the costume home.”  With the luscious dress safely stored in the Riverside Drive apartment, Lady Macbeth had ten minutes to decide on another first act costume.  “She thus presented the audience with a Thane’s wife with a limited wardrobe, for she had to wear the same dress twice,” jibed the newspaper.

Busch told reporters he intended to keep the purple velvet gown at his home through the run of the opera so there could be no chance of the diva’s wearing it.

In 1956 David Goodnow and his 46 Riverside Drive Corp. sold the former mansion.  While the house is still partitioned into apartments, many of Clarence True’s interior architectural details survive.  On the outside, little has changed.  The quirky, lovable amalgamation of styles personifies the independent personality of the Upper West Side in the last years of the 19th century.

non-credited photographs by the author
Posted by Tom Miller at 2:25 AM