From Horses to French Shoes -- No. 30 Jane Street 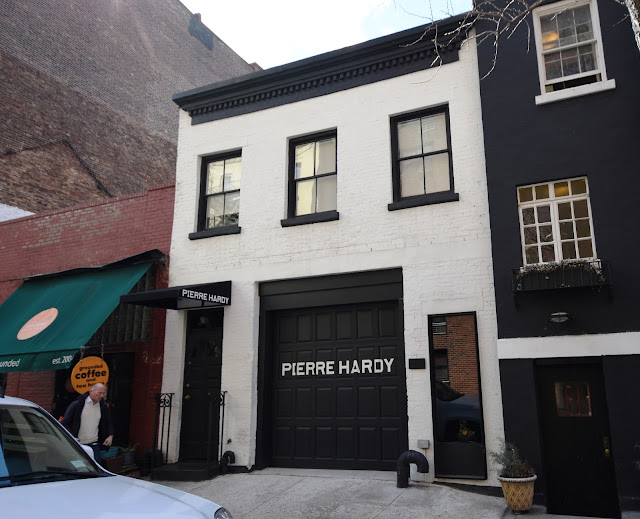 In June 1870 Charles E. Pearsall hired the locally well-known builder, Linus Scudder, to erect a stable at No. 30 Jane Street.  Pearsall was a fruit dealer with a stand in the Fulton Market and his new stable building would not be exceptional.  The Real Estate Record & Builders’ Guide reported it would be a “two-story brick second-class dwelling;” perhaps earning the description “dwelling” because a stable boy or groom would live upstairs.

The completed structure nestled in with older homes along the block.  Clad in red brick with brownstone trim, it followed the traditional carriage house design—a window and door flanking a central carriage bay below the loft and living space.  A cast cornice with dentil molding supplied the only architectural ornament.  It does not appear that Pearsall, who lived in Brooklyn, erected the stable for his own use; but as rental income.

Pearsall’s fruit business was not always smooth-going.  The old Fulton Market where he had operated his business for years was replaced in 1883.  On February 15 that year he complained to the Committee of Markets that “he was a standholder in the old market and had a permit for a stand in the new structure, but he had been told by the chief clerk of the market that he would not be given a stand,” as reported in The New York Times.  It was a powerful and unexpected blow that could cause Pearsall’s ruin.

As other merchants—fish dealers, butchers and oystermen, for instance—registered similar complaints, it became obvious that graft was involved.   Fish seller John C. Winters said he paid a clerk a $500 “bonus” to obtain a stand; and while another clerk told Pearsall that he “thought restaurants had no business to be in a market,” one-sixth of the new structure was taken up with restaurants which pushed out the old vendors.

Pearsall’s problems were ironed out and he was eventually operating from No. 19 Fulton Street.  On the afternoon of Saturday, April 20, 1895 he sent an employee, John H. Reilly, to take a package to a customer.  Oddly enough, the package did not contain fruit, but a collection of Eskimo and Asian artifacts including an ivory-handled sword, sealskin pants, and a beaded pouch among other items.

On his way to his destination, the middle-aged Reilly stopped in a saloon for refreshment.  Later his staggering and his large bundle drew the attention of pedestrians along Eighth Avenue.  A crowd of boys followed him, asking him to pull the sword from the bundle.  Reilly attempted to dodge the boys by ducking into another saloon.  And another.

Each time Reilly emerged from a saloon he was wearing more of the Eskimo outfit.  It ended on the corner of 12th Street where, according to The Sun, “he stopped and delivered an impassioned burst of oratory in his strange gibberish. Then he began to dance what might have been the war dance of some Central African tribe, accompanying himself with ferocious and explosive howls at frequent intervals and jabbing in all directions with his sword, to the imminent peril of the spectators, who gave him plenty of room.”

Arrested and taken to the Mercer Street Station House, Reilly was too drunk to explain himself.  He said he believed he was the nephew of the Mikado and had recently returned from a “long but fruitless search for Li Hung Chang.”

After a night in jail he was more lucid.  He explained he left Pearsall’s stand on an errand, “and something had happened to him; he wasn’t sure exactly what.”  The Sun reported that he was remanded in Jefferson Market Court and a notice sent to Charles E. Pearsall “that a pair of sealskin knee breeches, a sword, a pouch, and an Eskimo hood awaited an explanation from him as to their ownership.”

Pearsall died in October 1896.  His Jane Street stable had been operated at least since 1890 by Charles Van Etten, who was granted a permit “for trucks” here in February that year.  His $186 permit fee would amount to about $5,000 today.

As automobiles replaced horses in the 20th century, some carriage houses and stables were utilized as garages.  Others were converted to small factory or office space; and others that escaped demolition were transformed to residences.  No. 30 Jane Street seems to have gone through several of these incarnations, and as the 20th became the 21st century it was residential, slathered in barn red paint. 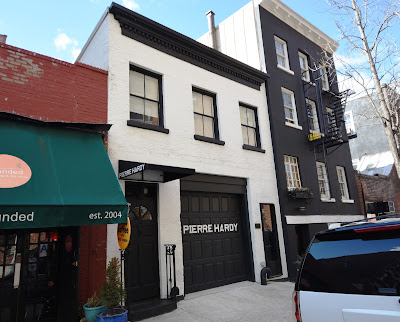 In 2010 the Landmarks Preservation Commission approved plans to renovate the old stable to commercial space on the ground floor, now occupied by French shoe and bag shop of Pierre Hardy.  The face lift did not include removing the paint; instead a less garish color was applied—not the best solution, but a visual improvement.