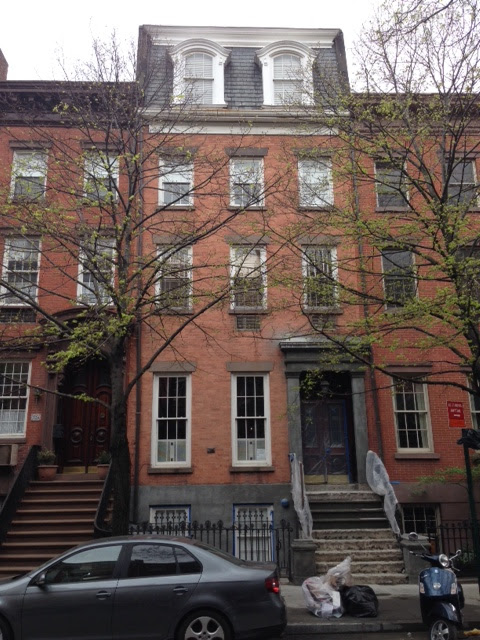 When Clement Clarke Moore first began dividing his family’s estate, Chelsea, into building plots, he envisioned a high-end residential neighborhood on the land.   Restrictive covenants were included in the deeds to ensure a higher class of home, and his original plots were unusually wide—averaging 25 feet but extending to 37 feet wide in a few cases.

Stone merchant Bezaleel F. Smith branched out into real estate development and on April 25, 1835 purchased lots from Moore—stretching from No. 326 to 332 West 22nd Street.   His speculative row was fully completed in 1841, designed in the popular Greek Revival style that was taking the city by storm.   Among them was No. 326 which would become home to Samuel Down.

Like its neighbors, the brick-faced home sat on a tall brownstone basement.  The contrasting stone reappeared in the wide stoop, the sills and lintels, and the hefty entrance pilasters and entablature so familiar in the architectural style.  Stylish iron stoop railings terminated at brownstone pedestals that, most likely, once supported ornate basket newels.

Samuel Down was an inventor and in 1857 received the Silver Medal from the American Institute of the City of New York for “the best dry gas meter.”   Not long after his wife’s death in Boston, on Friday, September 18, 1861, Down remarried.  By 1863 he had sold the house and he and his bride, Jane, moved to nearby No. 319 West 21st Street.

It was briefly home to James G. and Isabel S. Chalmers.  Tragedy visited the house on New Year’s Day 1863 when little James, Jr. died at the age of one year, seven months.   Two days later, on Saturday afternoon the child’s funeral was held in the house.

Within months Andrew Hanser soon moved into the 22nd Street home.  The Civil War had raged for two years by now, and 1863 would see horror visit New York City.   For three violent days in July New York City was terrorized by what became known as the Draft Riots.   To augment troops fighting the Civil War, a new law had been enacted to draft men into the army.  But corrupt practitioners focused on the working class—primarily Irish immigrants—while the wealthy bought their way out of service.  What started as a protest against the draft quickly disintegrated into a bloody riot with mobs ransacking homes and businesses, murdering innocent blacks, and beating civilians caught on the streets.

The neighborhood where Andrew Hanser now lived was, ironically, highly-Irish.  But on Monday July 13 not only was he attacked, but his house and its stable were targeted as well.  On August 9 The New York Times reported that two Irish immigrants, James Fitzherbert and Michael O’Brien, “stand charged with being engaged in the late riots.”  It added that Andrew Hanser filed a complaint against the men for robbery and assault.

“He makes oath that while passing through Twenty-eighth-street on Monday, July 13, he was attacked by a gang of men and boys, brutally beaten, and robbed of $70 in Treasury notes.  His stable was subsequently forced open and his horse and wagon stolen; the doors and windows of his residence were crushed in by the mob and his house plundered.”

Three neighbors, Mary Conlan, Mary E. Coon and Margaret Black, all testified on Hanser’s behalf.  They told the court that Fitzherbert had led the mob, “having a pistol in his hand at the time.”  When Hanser escaped, “they entered his house and searched it all over, but did not succeed in finding him.”  The New York Times reported “Maddened at not finding him, the witnesses saw O’Brien and Fitzherbert, with other rioters, break open Mr. Hanser’s stable and steal the horse and wagon.”

One of the women added a detail that no doubt enraged the courtroom.  She said that “during the attack on the house of Mr. H[anser], Fitzherbert proposed three cheers for Jeff. Davis, which were given by the mob and some of the neighbors.”  Another said that Fitzherbert led the mob down Ninth Avenue bearing an American flag.  He then threw it to the ground, trampled on it and “exclaimed in a loud voice, ‘D—n that flag.’”

With things significantly calmer the following year, the Hansers rented a room in the house for additional income.  Edgar Abel Turrill of Montrose, Pennsylvania, lived here while studying at Columbia College in 1864.  He was a junior that year.

By the late 1870s educator Edgar Vanderbilt lived in the house.   He earned his M.S. Degree at New York City College in 1866 and in 1878 was teaching in Grammar School No. 55 a few blocks away at No. 140 West 20th Street.   Vanderbilt would rise to the position of Principal of the school within a few years.

The well-to-do Alphonse Montant was a partner in the auctioneering firm of Townsend & Montant, which was organized in 1867.  His leisure activities included a membership in the New York Zoological Society, while Eliza was a member of the Colonial Dames of America.  The New York Times would later say “The Montants belong to the old French set.” 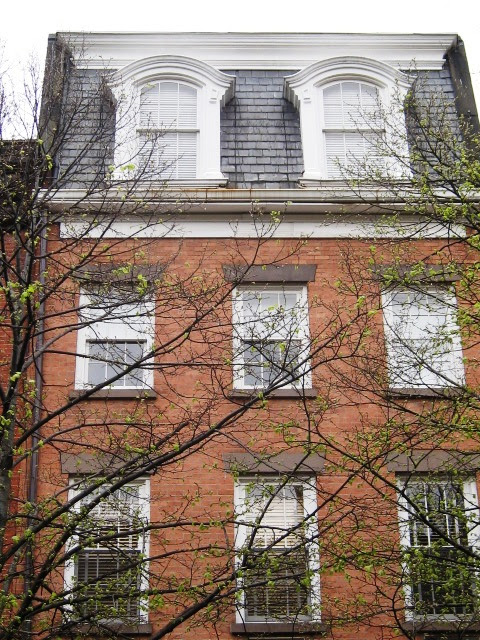 By the turn of the century Alphonse had taken up photography as a hobby and was a member of the Camera Club.   In 1900 he and Eliza began considering leaving No. 326 West 22nd Street, and their search for a new residence sparked Alphonse’s creative side.

He entered a group of photographs in the Camera Club’s exhibition of April 1900 with the hopes of winning the silver cup.   The New York Times was impressed with his montage, which he cleverly titled “Moving Pictures.” 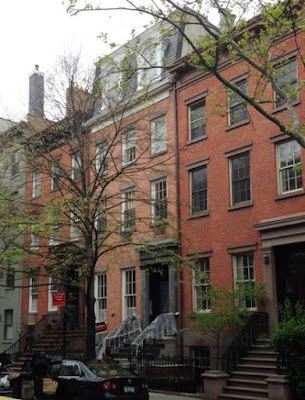 ‘”Moving Pictures,’ by Alphonse Montant, is among the best.  The series was not taken for use in the biograph, or any of the other ‘graphs’ now so popular, but simply shows several views taken on the 1st of May, when the family was seeking a more congenial abode.”

Bessie T. Siffert, who dealt in real estate, purchased No. 326 as her residence.  While living here in 1912, for instance, she also owned a tenement building at No. 337 West 20th Street.  In 1924 the house was purchased by Mrs. Mary J. Taggart.  Like most of the once-grand homes on the block, she operated it as a rooming house.

Mary Taggart retained ownership for three decades, selling it in 1954 to an investor.   The house continued to be operated as a rooming house until 1972, when it was converted to apartments—two per floor.

Although the elegant Victorian interiors have been lost; No. 326 is little changed since the Montants added the added the French roof in 1889.